On November 18, 1871, Ursuline College became the first college for women in Ohio and one of the first Catholic colleges for women in the United States. The first campus was located near Cleveland's public square and teeming downtown commercial center. The building, a high-style late Federal/early Greek Revival mansion built in 1833 for Judge Samuel Cowles, was purchased specifically to provide a residence and a school from which the Ursuline sisters could pursue their educational mission. Within two decades, they had outgrown the building and the property, so the Ursuline sisters moved east to more spacious grounds.

Ursuline students attended this campus on Euclid Avenue near Cleveland's public square from 1871 until their 1892 move eastward to more spacious quarters. 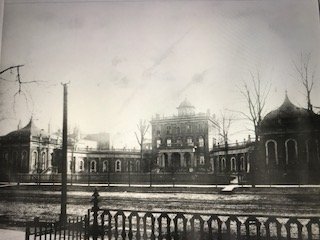 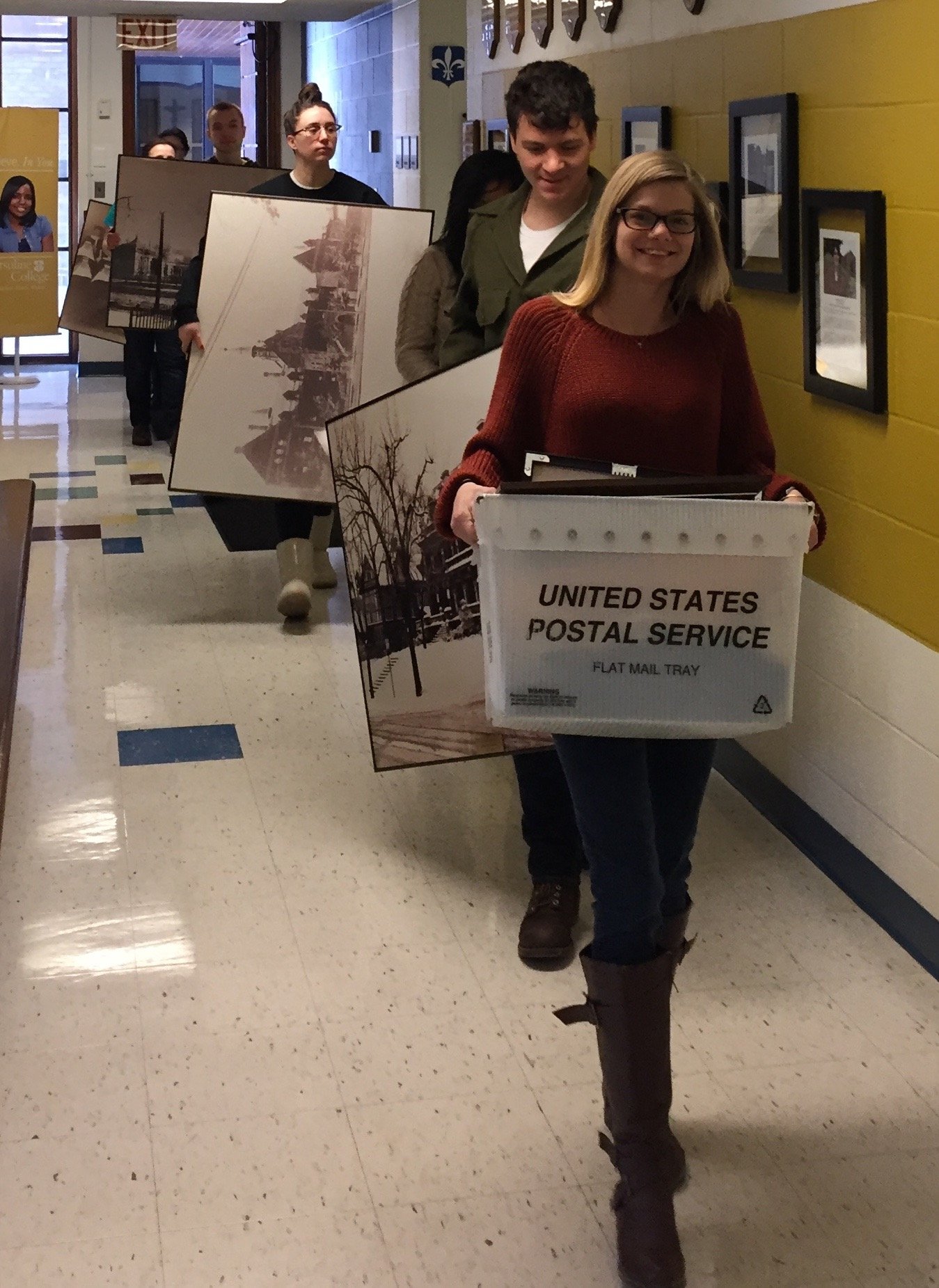 Found it! Clay researches the various locations of our Ursuline College campuses using the map collection at our own Cleveland Public Library. 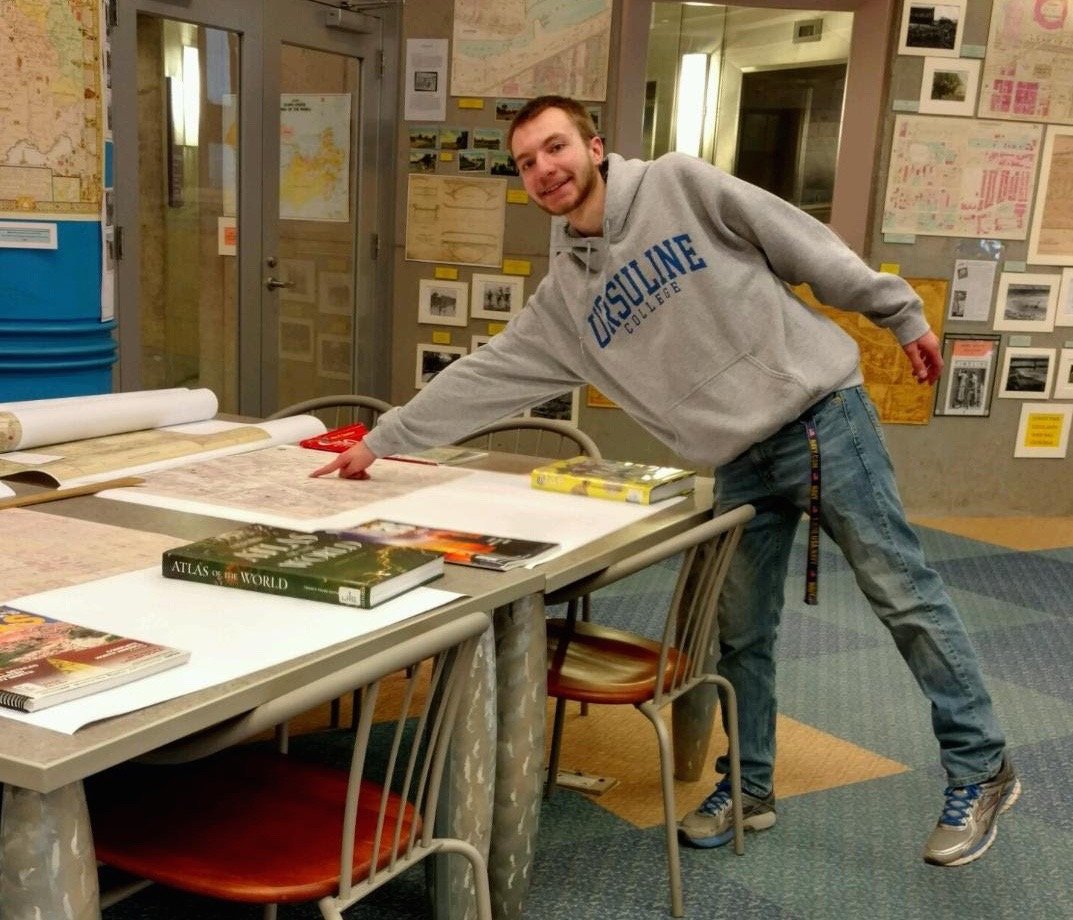 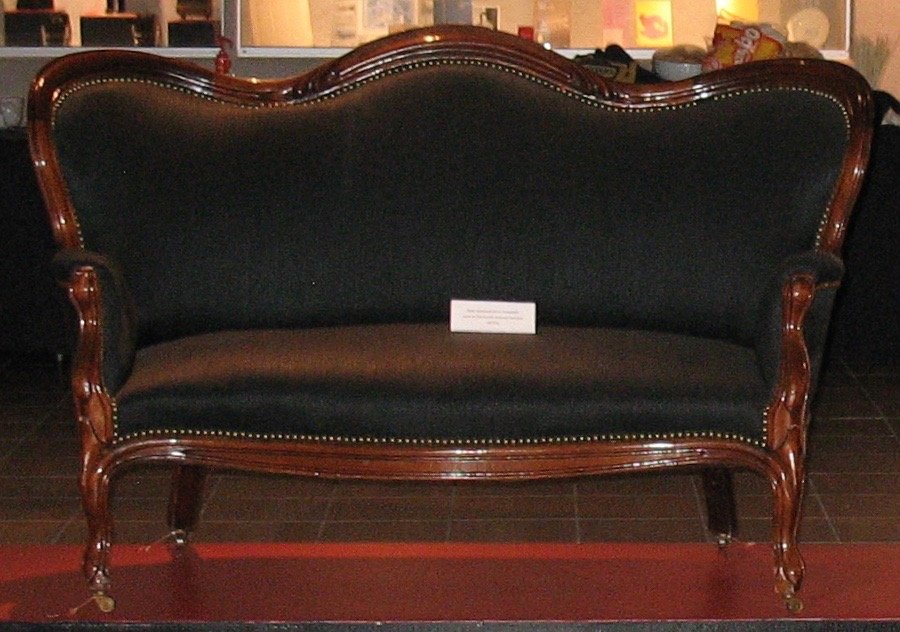 “As a young priest in France, Father [Amadeus] Rappe had been the chaplain at the Ursuline Academy in Boulogne-sur-Mer…. He knew well the educational work of the Ursulines…. Bishop Rappe turned to his friends in France and begged them to open a school in Cleveland,” recorded Sister Anna Margaret Gilbride.1

In preparation for welcoming the Ursuline sisters and their mission, Bishop Rappe purchased a high-style two-story brick house once owned by Judge Samuel Cowles and constructed by revered master builder Jonathan Goldsmith near the downtown on Euclid Avenue (then still a dirt road!).3

The Ursuline sisters arrived on August 8, 1850, and immediately set to work adapting the mansion to the needs of a convent and school. Full of energy and conviction, they advertised their opening of a school for girls on September 6, less than a month away. According to Dr. Patrick Riley, 300 girls arrived on the steps of the school that first day, convincing the community of resounding success.4

To ensure that the government would not be able to confiscate church property, as had frequently occurred in Europe, Mother Mary incorporated the Ursuline Academy of Cleveland in 1854, later including Ursuline College as one of the Academy’s division.5

As Dr. Patrick Riley later related, “Recognizing the need for higher education for Catholic women, Mother [Mary Beaumont] made a rather bold request of the State of Ohio and sought a charter to open a women’s college in Cleveland…. [On] November 17, 1871, Ursuline College became the first college for women in Ohio and among the very first Catholic colleges for women in the United States.” The college featured a liberal arts curriculum with classes housed in same building as the Academy.6

The college’s popularity and success required expansion of the original two-story mansion to include a third story plus two long, curved, flanking wings. The building retained much of its Federal and Greek Revival style architectural elements. Both Federal style (popular ca. 1780-1840) and Greek Revival style (popular ca. 1830-1850) included very formal space with rooms for specialized purposes. The exteriors were known for their use of balance, symmetry, and restraint to emphasis civic virtues such as order, logic, and balance. Leaders of the young United States of America looked to the great Roman Republic for models of self-government and political systems. They also identified with the classical Greek ideals of democracy and individual civic responsibility, so looked to the most prominent of Greek buildings, the Parthenon, for inspiration. These were intentionally reflected in the architecture chosen for major governmental buildings in Washington, D.C., and became popular for residential architecture as well.

The popularity and necessity of women’s education increased dramatically in the late 19th century. “By the 1880s twice as many women [as men] were graduating from Cleveland high schools…. While men often left home to attend college, women tended to remain close. Increasingly women sought higher education, challenging old institutional models, but they still had few options in college education,” as noted by Ursuline College in Educational and Architectural Perspective.7

As the city center became increasingly crowded and their student body grew, the Ursuline sisters turned their attention to the growing population in the eastern sections of Cleveland and planned for a larger facility to house Ursuline College, Academy and the Motherhouse. Their attention was captured by property available at the intersection of Scovill Avenue and Wilson Street (now East 55th).