The Wallis Annenberg Center for the Performing Arts

Listed on the National Register of Historic Places since 1985, the Wallis Annenberg Center for the Performing Arts opened its doors in 2013 in the building that was once the Beverly Hills Post Office. Originally opening in 1936 during the New Deal, the Post Office featured eight fresco murals painted by a Works Progress Administration (WPA) artist and is now one of two remaining sites in California's Federal building system featuring New Deal art. After the building was outgrown, the Beverly Hills Post Office moved to a larger facility and the original building was named surplus property. Finally, the Italian Renaissance Revival style building was once again put to use when the Wallis Annenberg Center for the Performing Arts opened at the location. In addition to the old Post Office, The Wallis consists of a new 150-seat Lovelace Studio Theater and a 500-seat Bram Goldsmith Theater. Due to its location and design, The Wallis is a unique mix of history and futurism, making it a distinctive experience for locals and visitors. 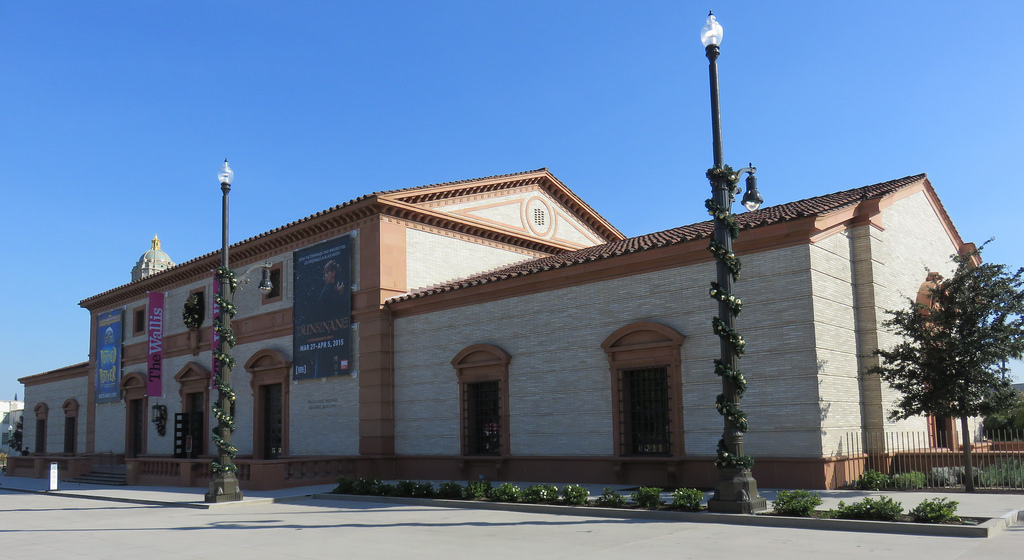 The Wallis seen at night from Santa Monica Blvd. 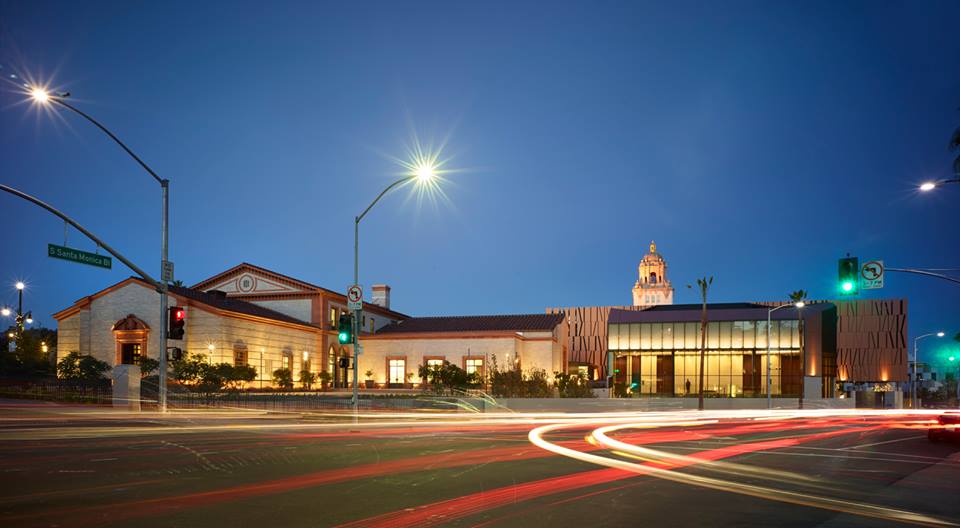 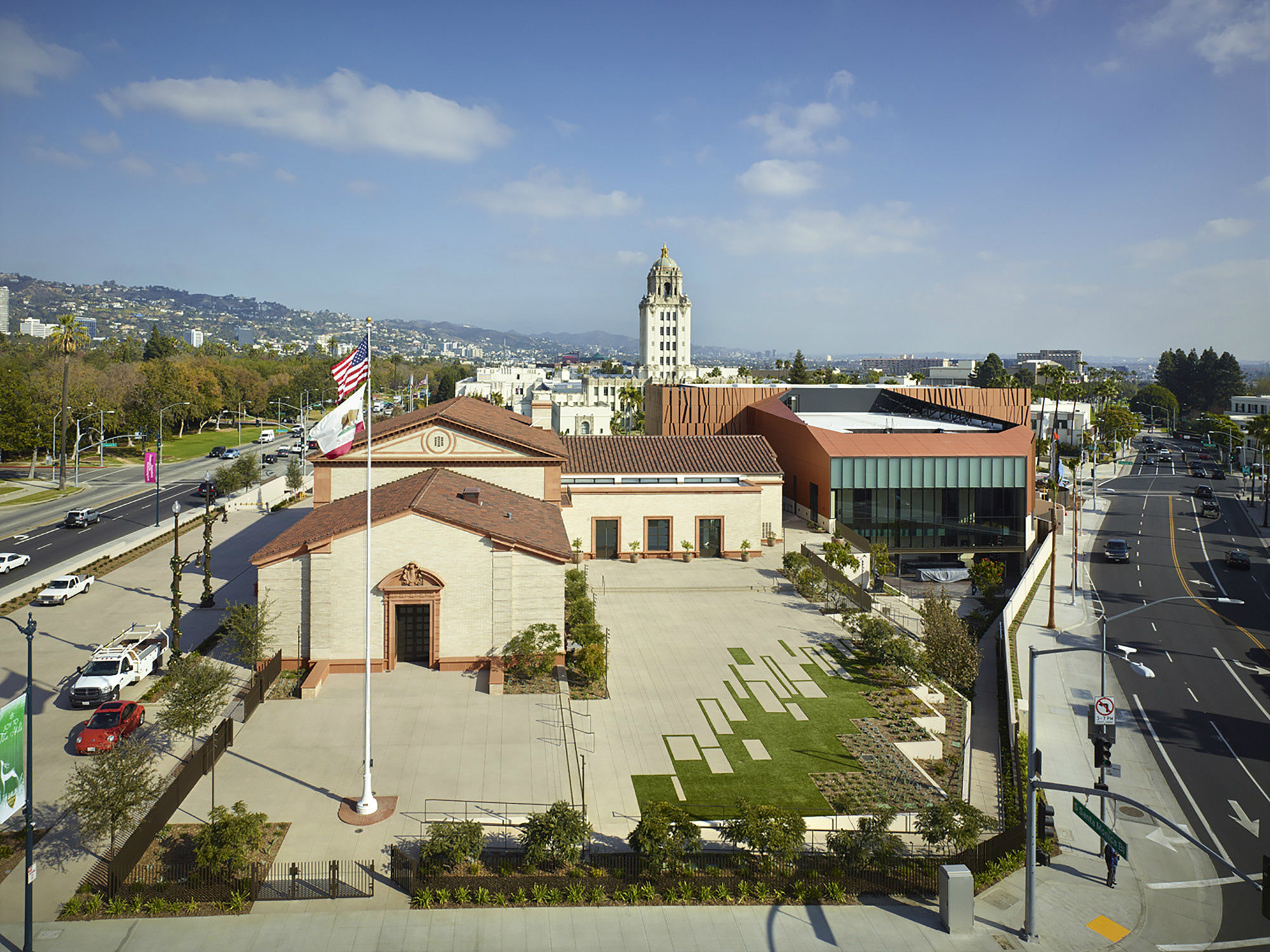 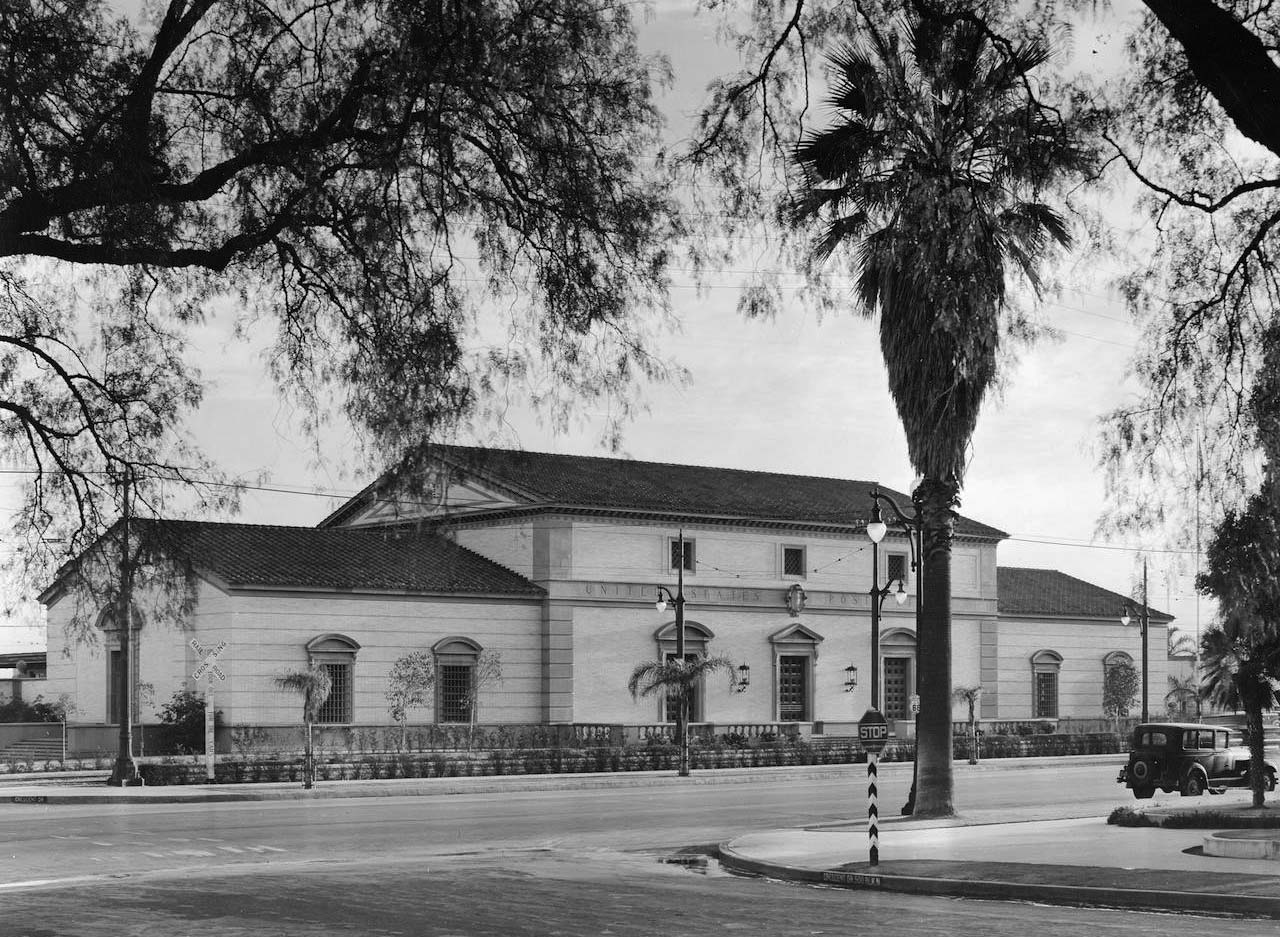 One of the eight fresco murals done by artist Charles Kassler, Jr. for the Beverly Hills Post Office in the mid 1930s. This lunette features the Public Works Administration (PWA) putting men back to work during the Great Depression. 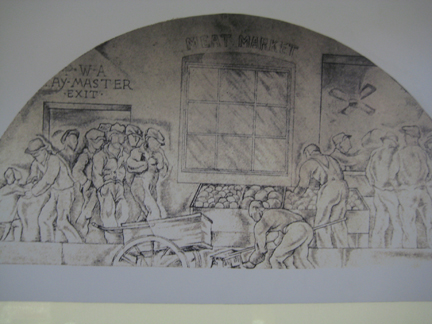 The Wallis Annenberg Center for the Performing Arts, known as The Wallis 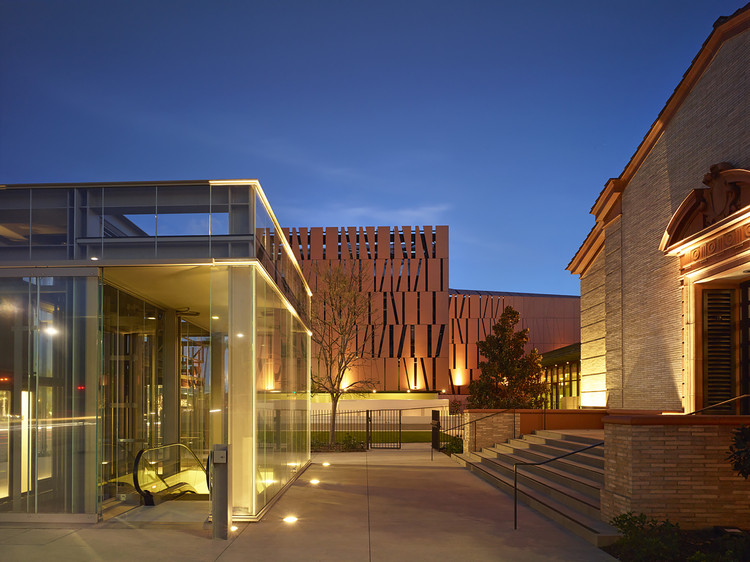 Before the Post Office was built during the New Deal, Beverly Hills' first train station, the Pacific Electric Railway station ,was located on the corner of Santa Monica Blvd. 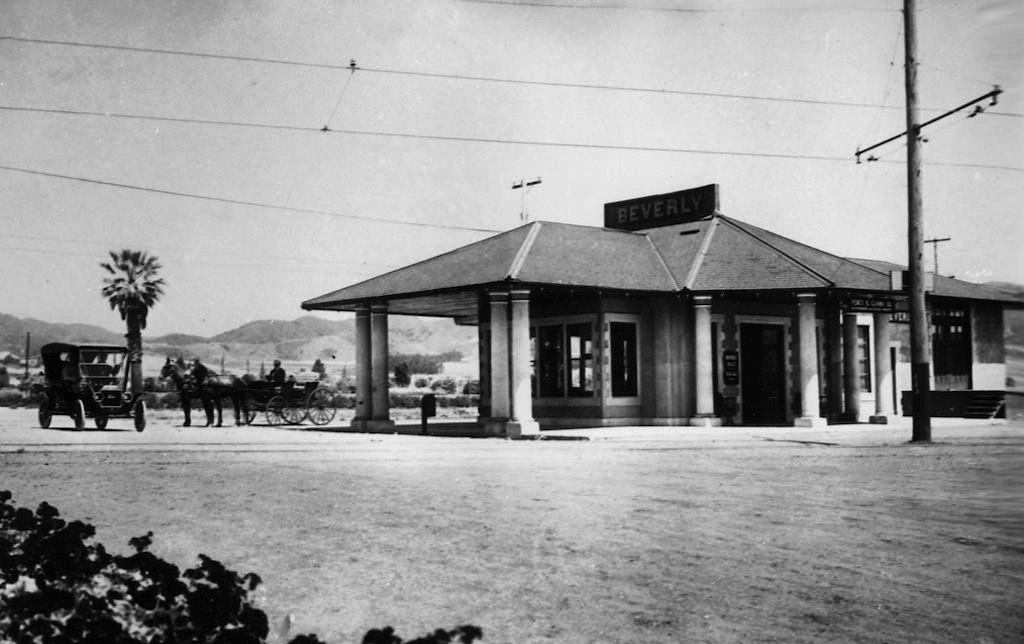 The 500-seat Bram Goldsmith Theater located inside The Wallis 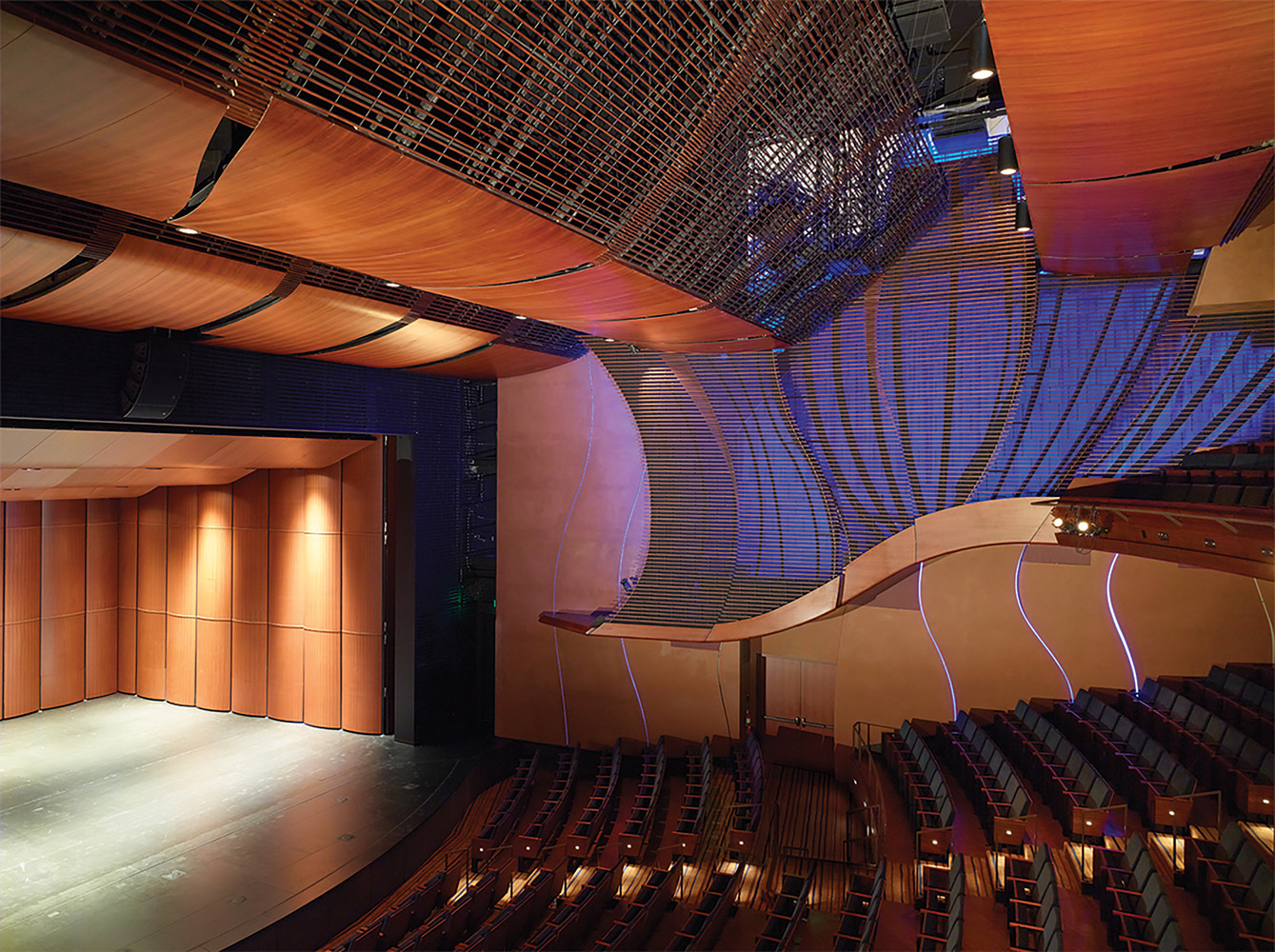 In the years after the incorporation of Beverly Hills in 1914, the city grew at a rapid rate. Besides a steady flow of movie stars building mansions like Douglas Fairbanks and Mary Pickford did with "Pickfair," East-coasters also found appeal in the warm, sunny Southern California climate. Due to the increase in population, more civic projects and buildings were needed to create the prestigious city Beverly Hills was destined to be. When Will Rogers was made "Honorary Mayor of Beverly Hills" in a ceremony in front of the Beverly Hills Hotel, cameras were on-hand to film the event. Later, the footage was played in movie theaters across the country and thousands of letters poured in to congratulate Rogers on his honor. With the onslaught of so many letters, it appeared Beverly Hills was now in need of its own post office.

The city of Beverly Hills petitioned Washington, D.C. for funds to build a post office, but the $85,000 offered by Congress was not enough and the city turned the funds down. After a few more unsuccessful attempts to obtain more money, the "Honorary Mayor" of Beverly Hills sent a letter of his own to the Secretary of the Treasury, humorously requesting $250,000 for the post office. Rogers' letter prompted a visit from officials in Washington, who decided a post office was necessary for the burgeoning city and $300,000 was designated for the new building.

Architect Ralph C. Flewelling, who had also designed buildings at the nearby campuses of USC and UCLA, worked in conjunction with Alison & Alison Architects to build the Italian Renaissance Revival style post office on the site where the Pacific Electric Railway station stood. Inside the interior Grand Hall, an artist named Charles Kassler drew eight fresco murals depicting scenes from the Great Depression and the beginnings of the mail service. Kassler said at the time of completion he wanted to portray "working people returning to a fully functioning society." In one lunette titled "The Bison Hunt," artists are seen working on another mural at the Los Angeles Public Library. The fresco murals, created during President Franklin Roosevelt's New Deal, were funded by the Works Progress Administration (WPA) and is now one of the two remaining frescos from the New Deal period located in the California Federal building system.

The Beverly Hills Post Office officially opened in 1936. Over the decades, the building became an architectural landmark in the city frequented by famous faces daily. Almost fifty years after the Post Office was dedicated it was added to the National Register of Historic Places. But within a few years, the historic site would be declared surplus property because the postal services outgrew the building and a larger facility was built in a new location. The Beverly Hills Cultural Foundation, a group of local civic and business leaders, came together to protect the landmark structure and assigned it to be used as a culture venue.

In October 2013, the Wallis Annenberg Center for the Performing Arts opened with a star-studded gala attended by such stars as Robert Redford, Charlize Theron, Gwen Stefani, and Demi Moore. The brainchild of philanthropist Wallis Annenberg, The Wallis consists of the old Post Office and a 500-seat Bram Goldsmith Theater. Theater-goers have the opportunity of enjoying both classical and modern performances in one of Beverly Hills' most historic landmark buildings.