Built in 1904, the Toledo Harbor Lighthouse stands on a 20-foot stone base approximately eight miles away from offshore north of Maumee Bay State Park. It was built to help guide ships into the harbor, which had been recently dredged a few years prior in 1897 to allow bigger ships to access to the harbor. It was designed in the Romanesque style and some think it looks like a gingerbread house. It is 4000 sq. ft. in size, stands 64 feet high, and rests on a 20-foot stone base. The lighthouse, which replaced the 1837 lighthouse on Turtle Island at the mouth of the Maumee River, featured a third-and-a-half-order Fresnel lens made in France. The all-volunteer organization, the Toledo Harbor Lighthouse Preservation Society has owned the lighthouse since 2007 and works to preserve it. It also offers boat rides around it and, up until 2015, tours inside the building. In that year, a storm destroyed the dock, and efforts to rebuild that dock and restore the lighthouse continues thanks to the Toledo Harbor Lighthouse Preservation Society.

The Toledo Harbor Lighthouse was built in 1904 and is listed on the National Register of Historic Places. 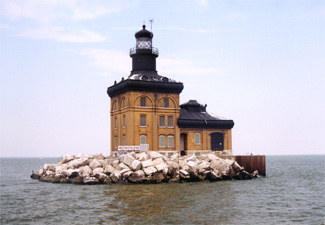 There was enough room in the lighthouse for a keeper and two assistants. It was automated in 1965 and the original light was replaced with a modern one in the late 1990s. As such, it appears the light is still operating as a navigational aid. The Fresnel lens is on display at the park. The lighthouse was well built and has largely remained in good condition. It was added to the National Register of Historic Places in 1983.