The Mountainlair, also known as "The Lair" is the student union building at West Virginia University. It was built in the 1960s to replace the 1948 student union building. The Lair serves as a hub that combines the educational, social, recreational, and cultural needs of West Virginia University's diverse student body. It provides a large variety of services and programs, including ATMs/banking, copy centers, email/print stations, lockers, lounges, parking, a food court/cafeteria, games areas, a post office, a movie theater, and more. In addition to recreational facilities and student services, the Mountainlair also contains a large events ballroom, various meeting and conference rooms, and many administrative offices of the University. The campus bookstore (stocked by Barnes & Noble), Starbucks, and university shop are also adjoined to the Mountainlair. 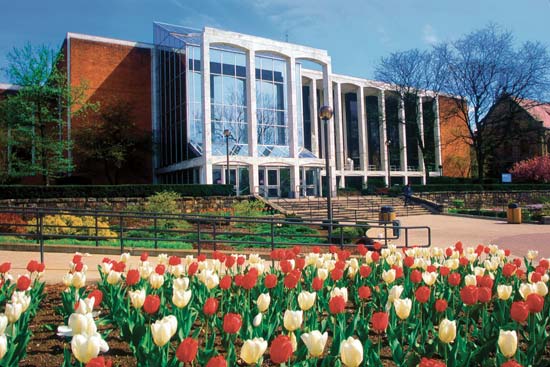 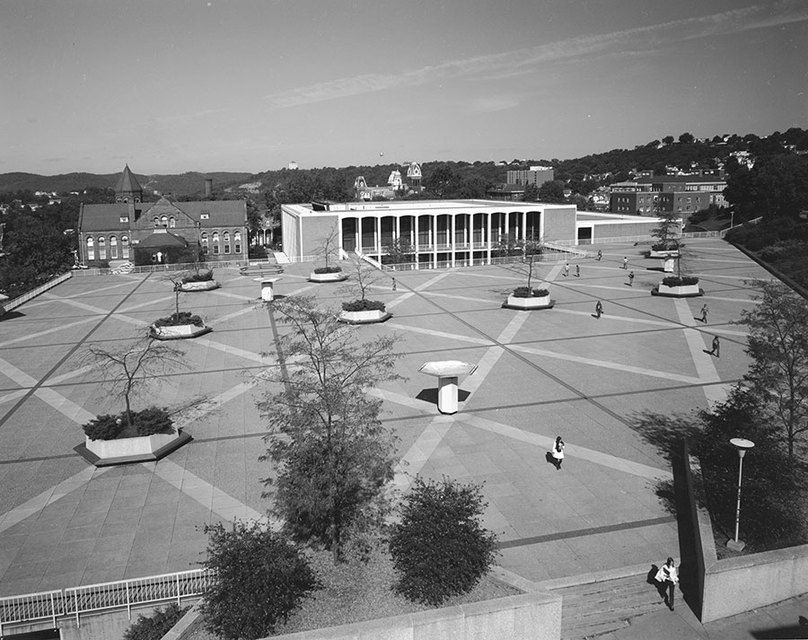 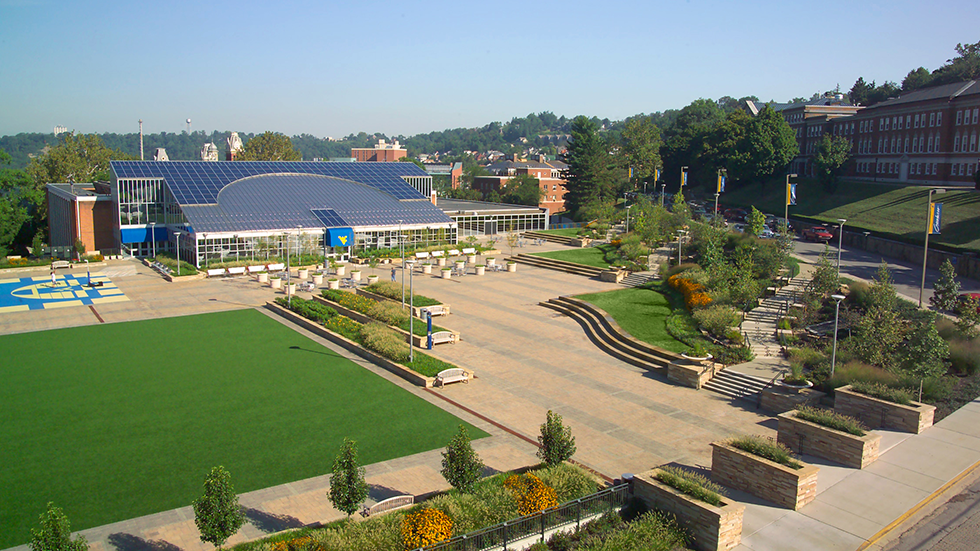 The Mountainlair's lobby and help desk. 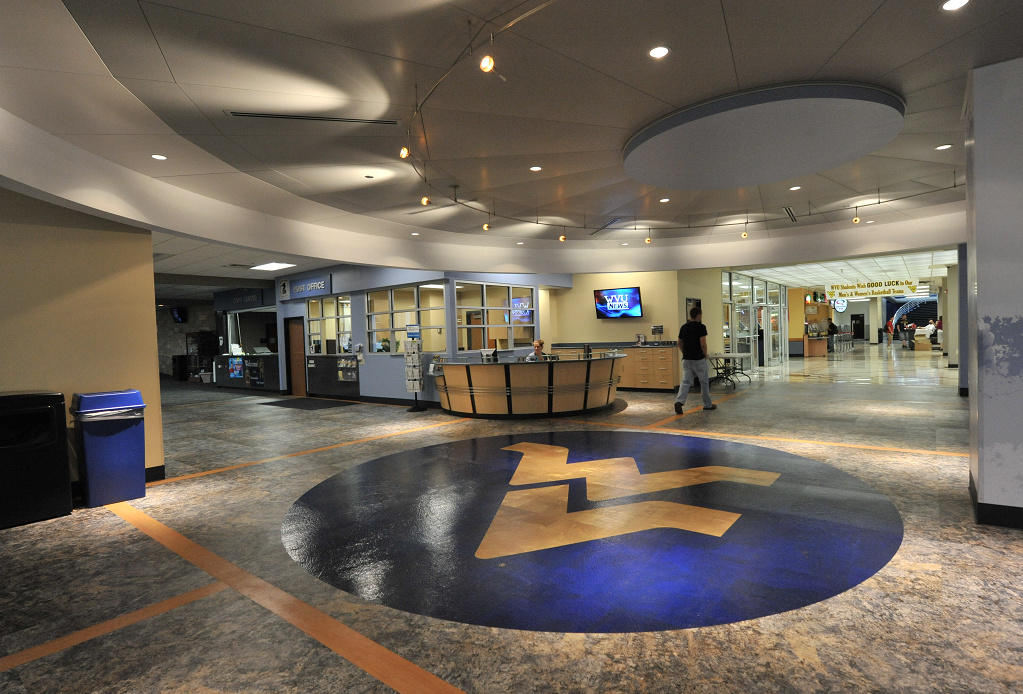 The Mountainlair's cafeteria and food court, featuring flags from around the world. 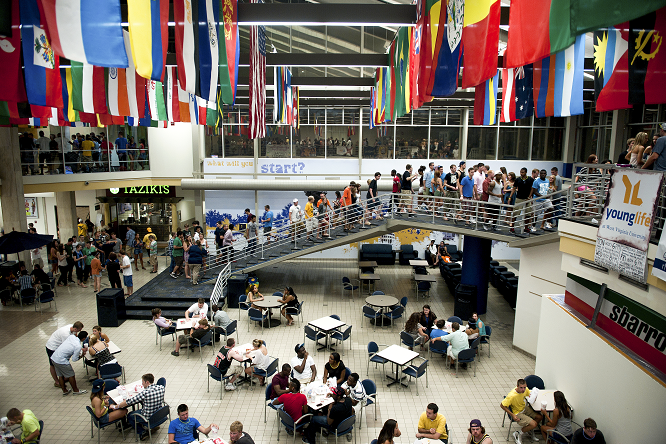 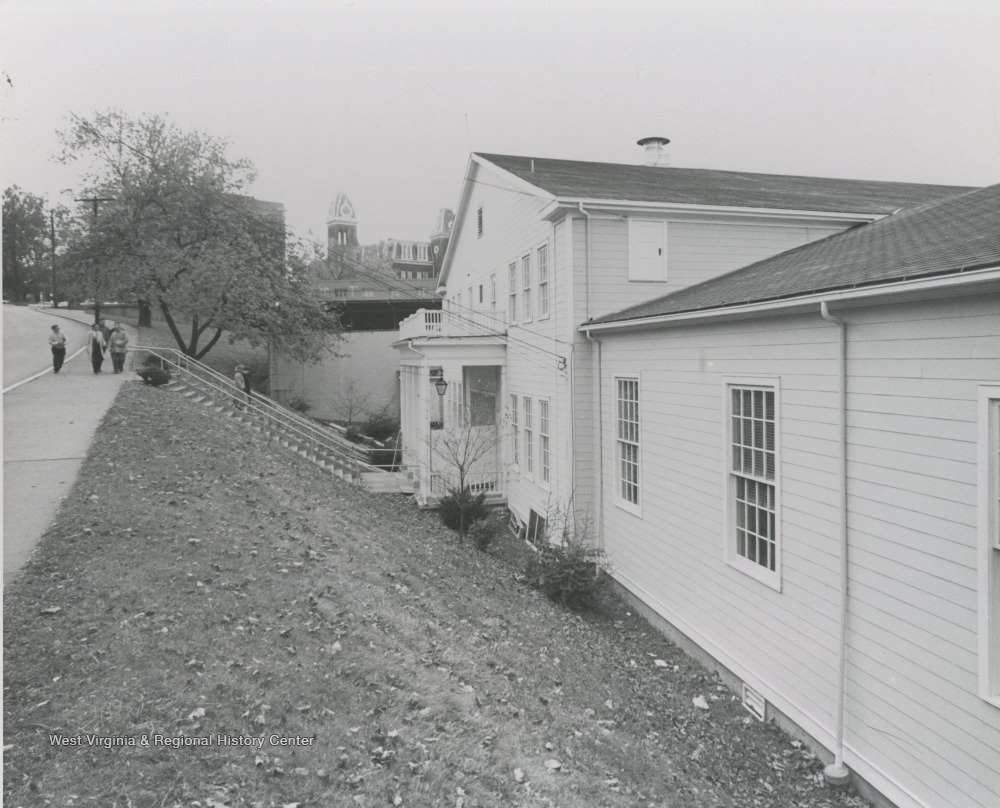 Sign on the Old Mountainlair announcing its closing in 1967: "We close Oct 22nd. See you the 28th at the New Lair." Photo courtesy of West Virginia and Regional History Center. 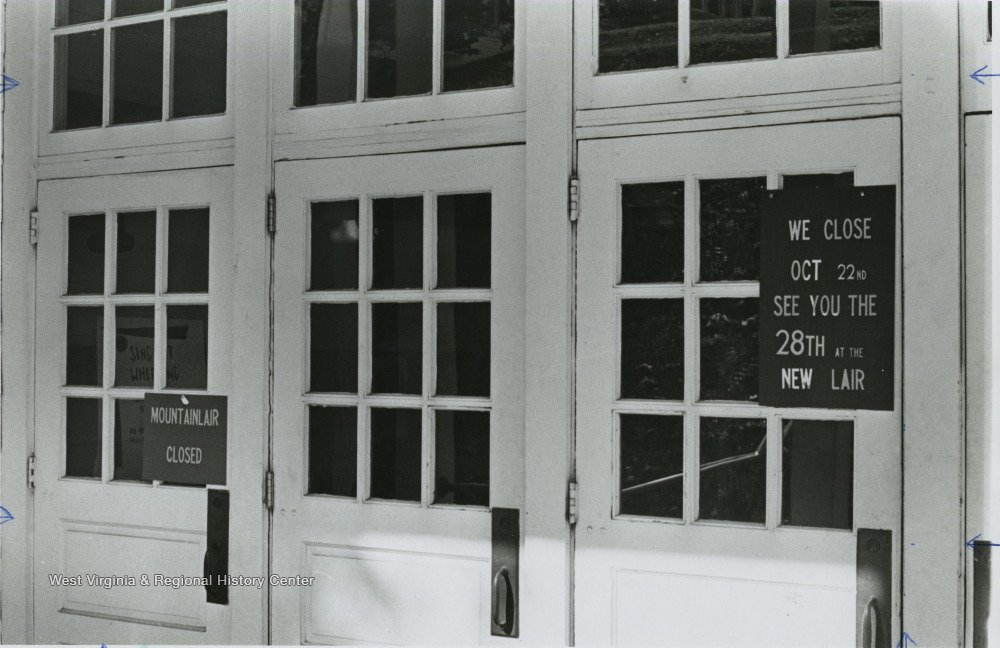 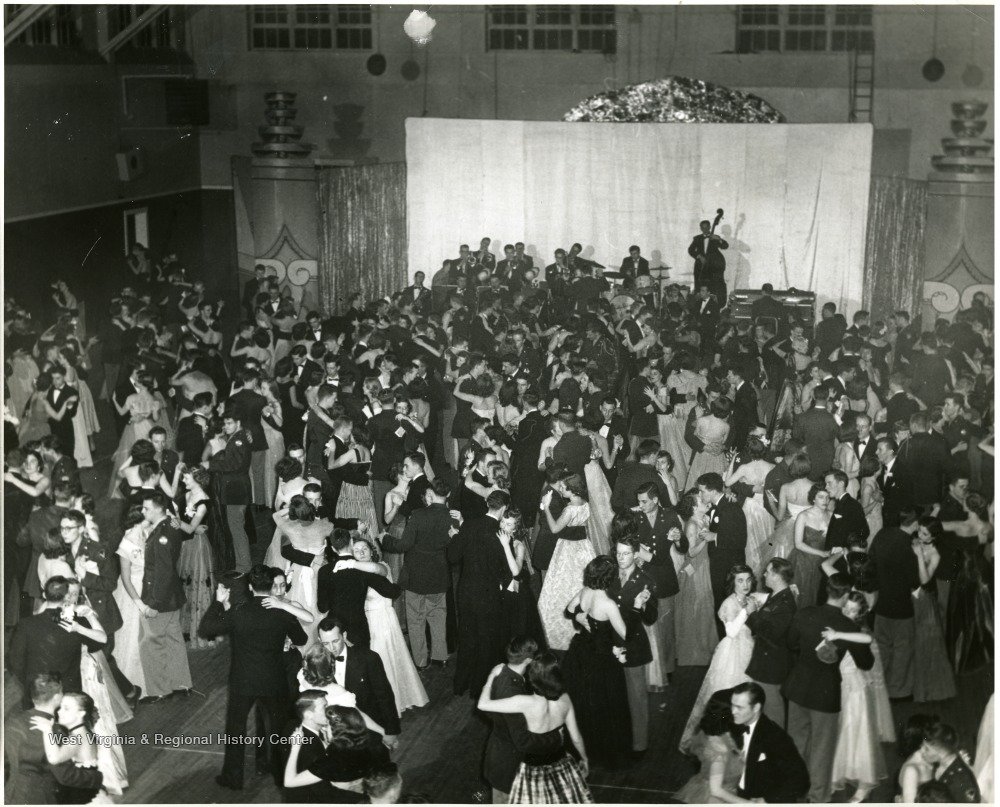 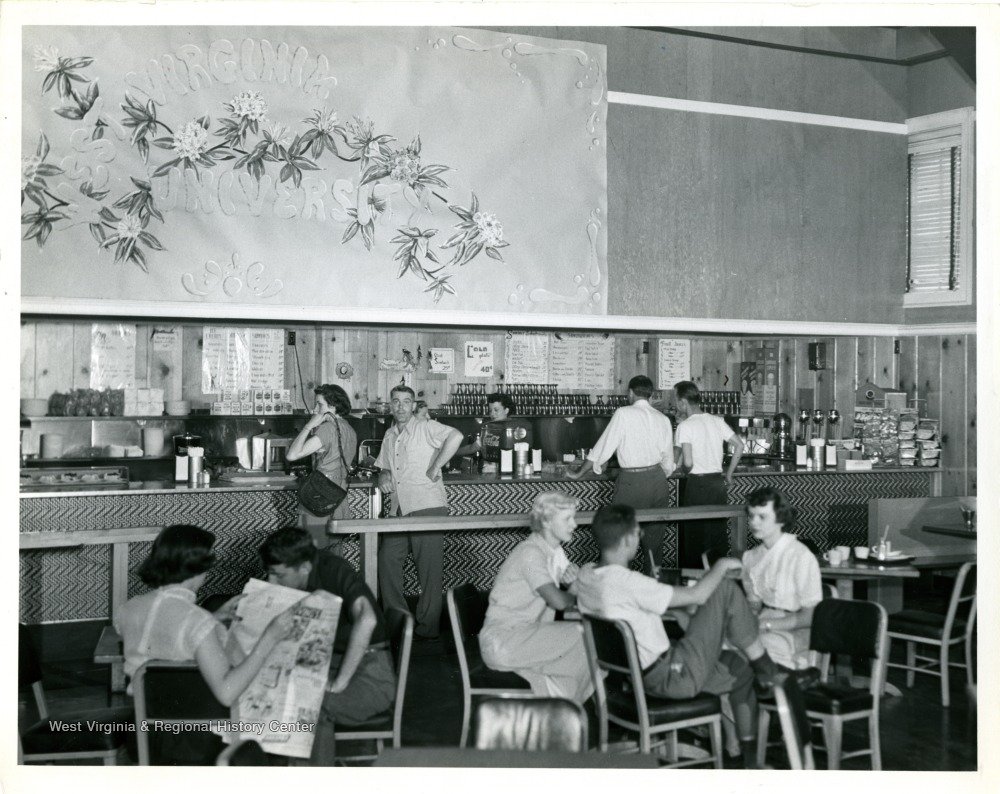 View towards Woodburn Circle and including Martin Hall during the construction of the new Mountainlair in 1966. Photo courtesy of West Virginia and Regional History Center, WVU Libraries. 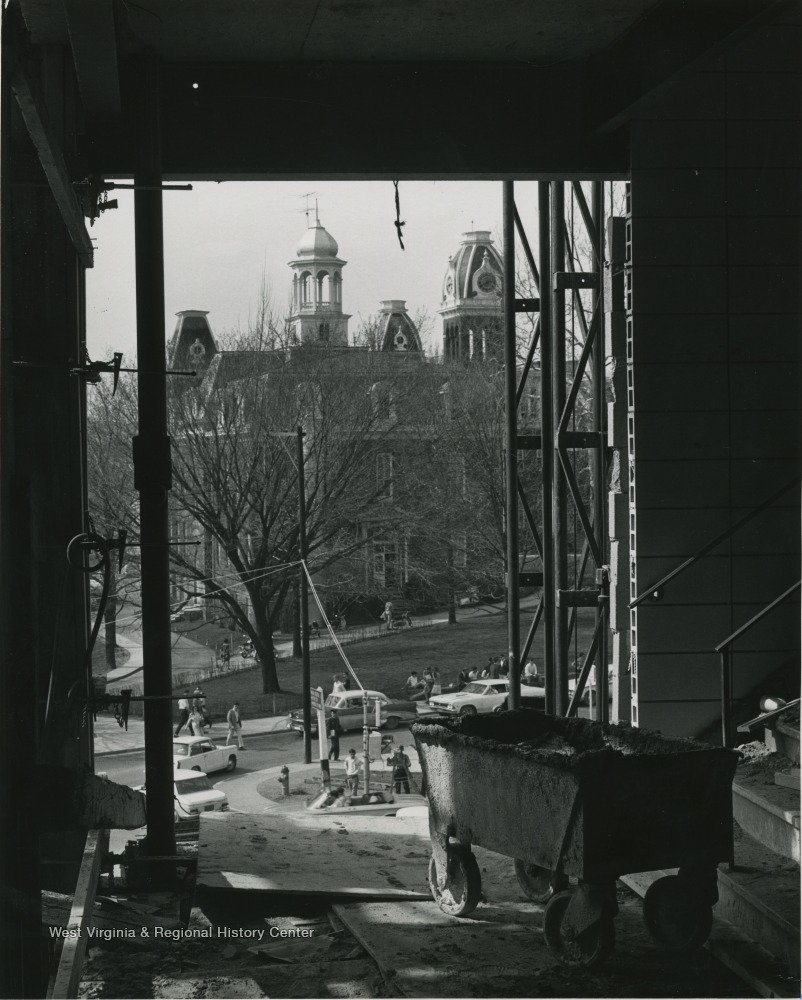 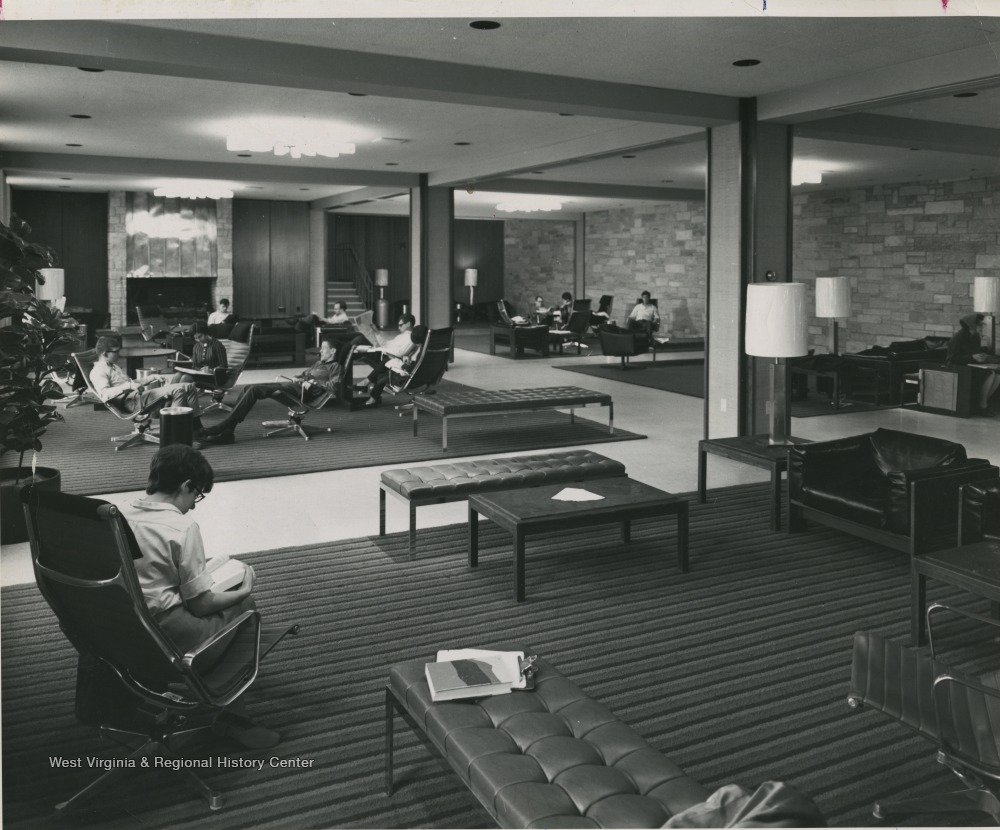 The front of the Mountainlair has long been a site for civic and political activism, like these students protesting the draft in 1980. West Virginia and Regional History Center, WVU Libraries. 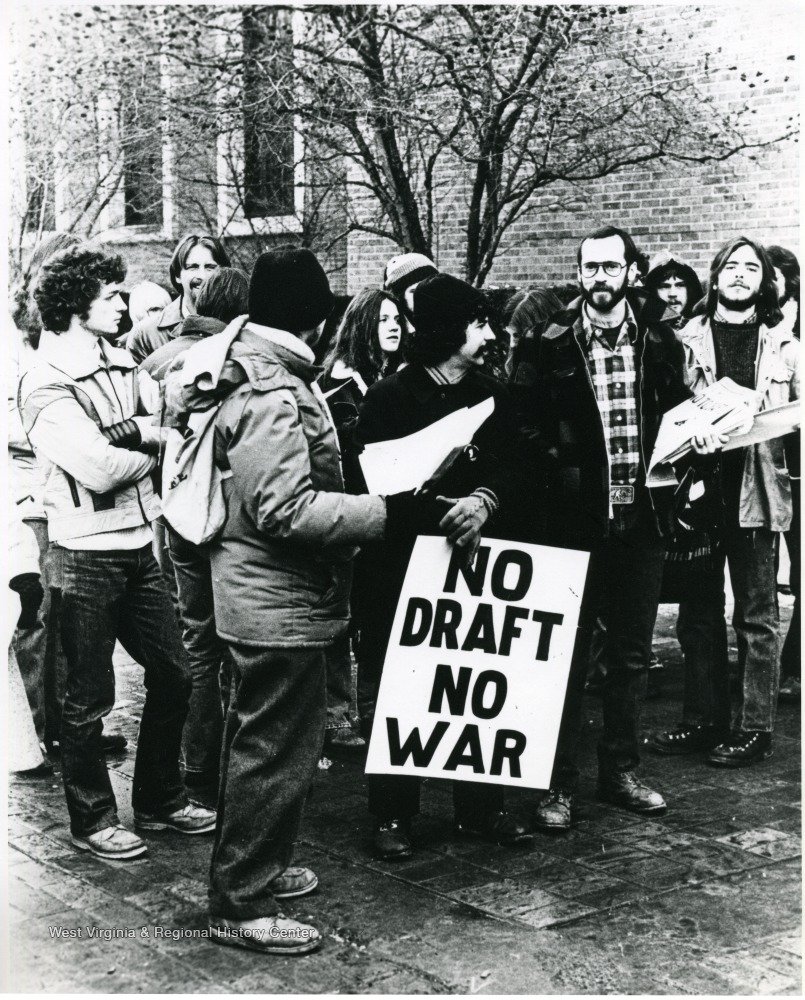 The biggest WVU student protest in the Vietnam era took place in front of the Mountainlair in May 1970, shortly after the bombing of Cambodia and Kent State shootings. Here, the National Guard sprays the raucous crowd with teargas. WVU Libraries. 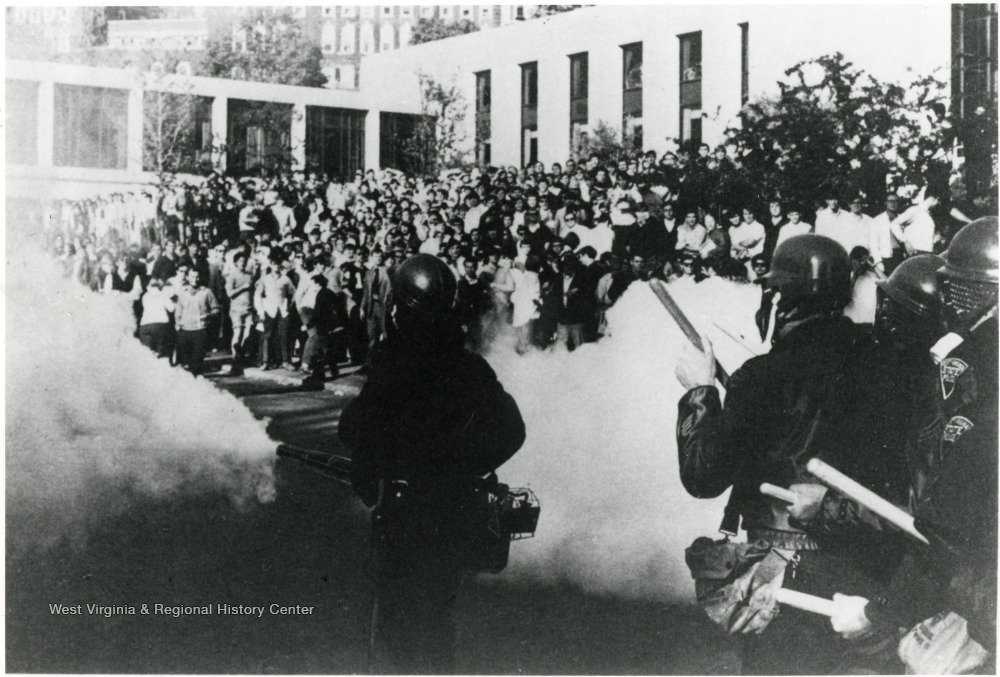 A photograph, possibly from a student exhibit held at the Mountainlair, in the Mountainlair Art Collection. Photo from around 1970 courtesy of WVU Multicultural Programs Facebook. 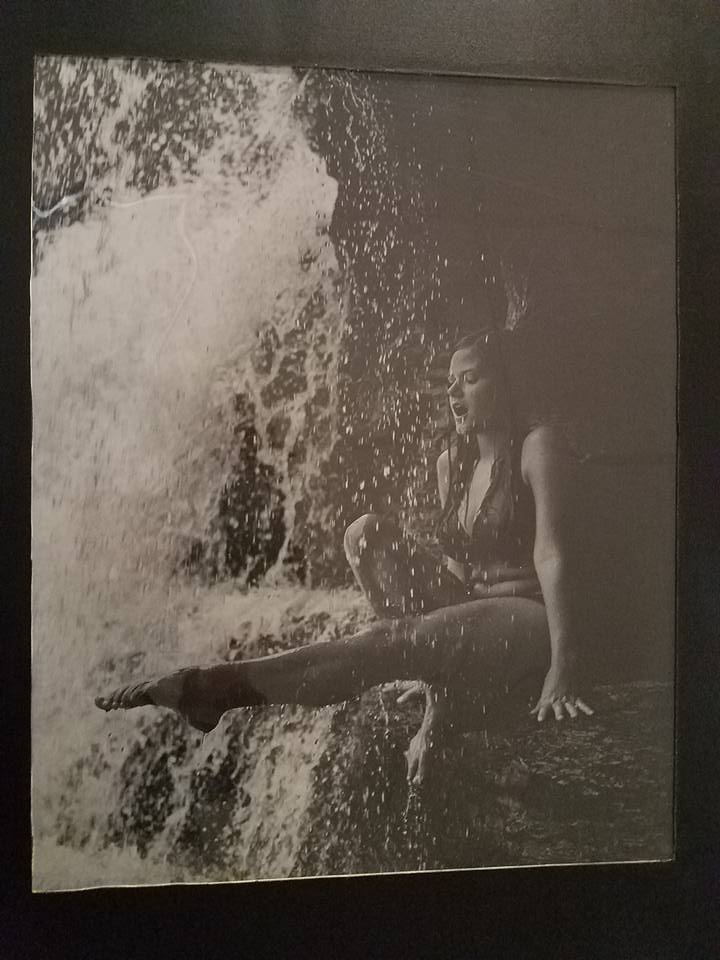 "Gray Sunday", by Michael Morin. Lithograph. On display on the second floor of the Mountainlair down the hall to the left after coming up the main stairs. In the permanent Mountainlair Collection. 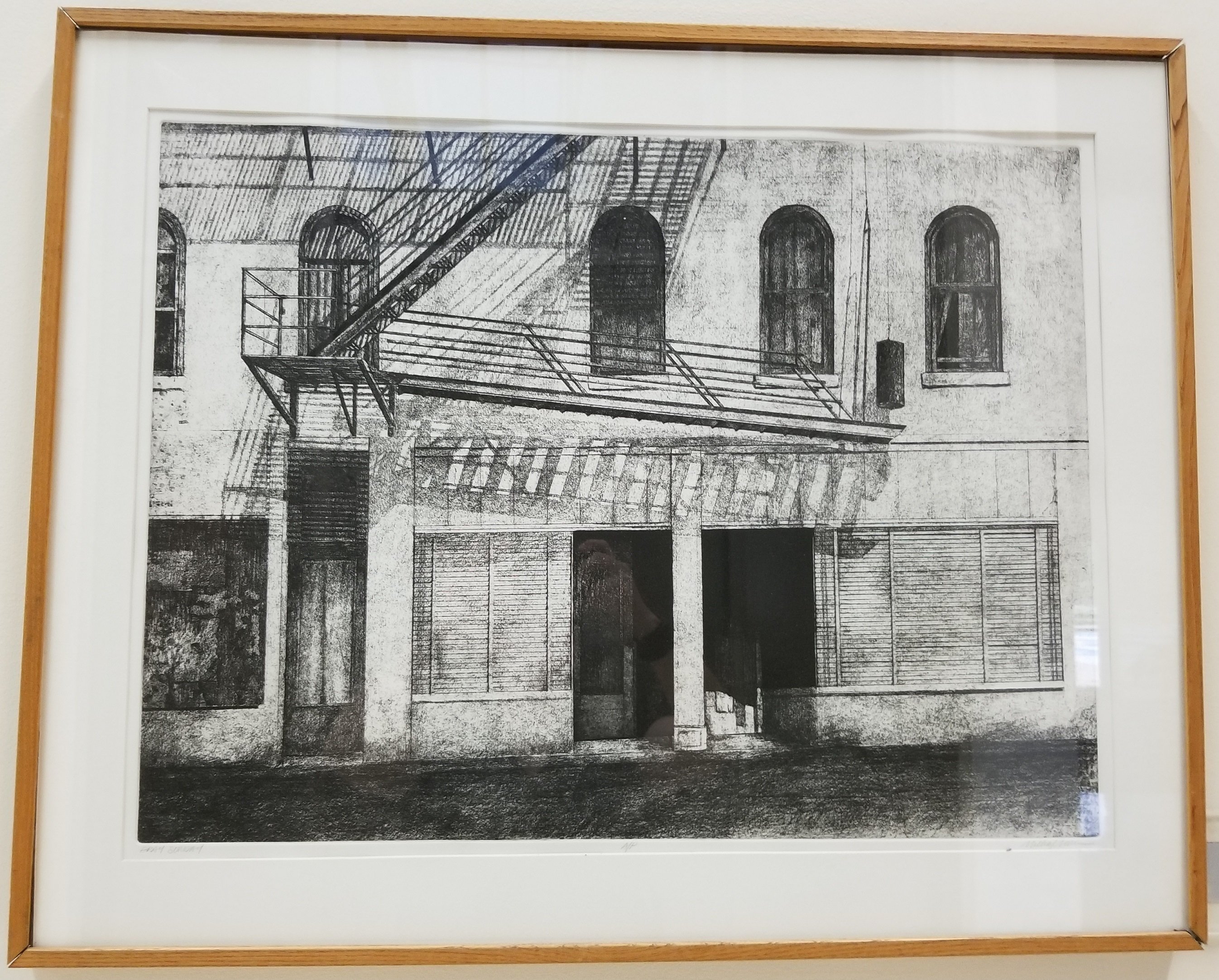 "Untitled Abstract" by Suzanne S. Bowles. Oil painting. On display on the second floor of the Mountainlair down the hall to the right after coming up the main stairs. In the permanent Mountainlair Collection. 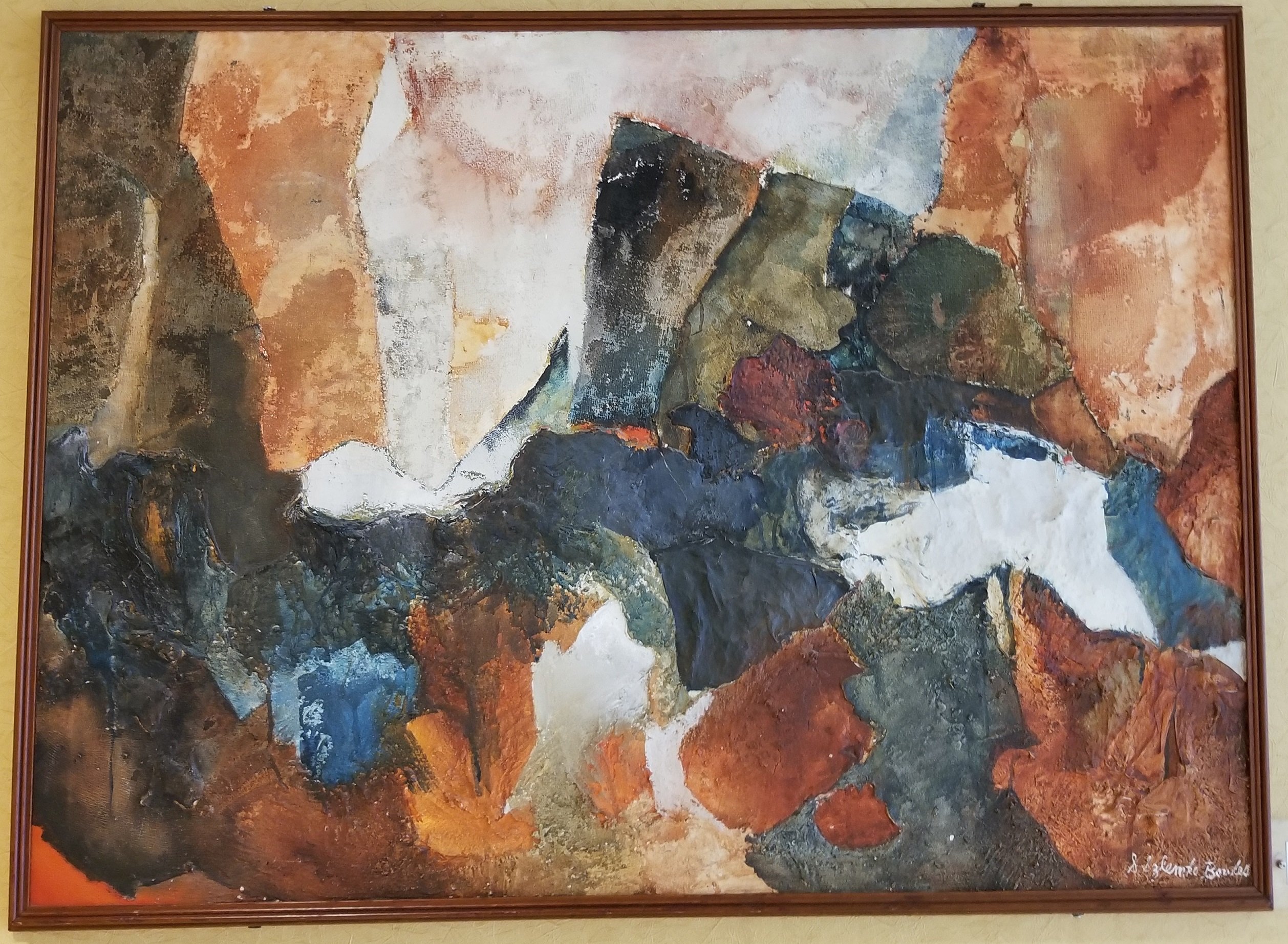 "Log Cabin" by Loiuse Piper. Glass vase. In a display case on the second floor of the Mountainlair, next to the Student Union Administrative Offices. In the permanent Mountainlair Collection. 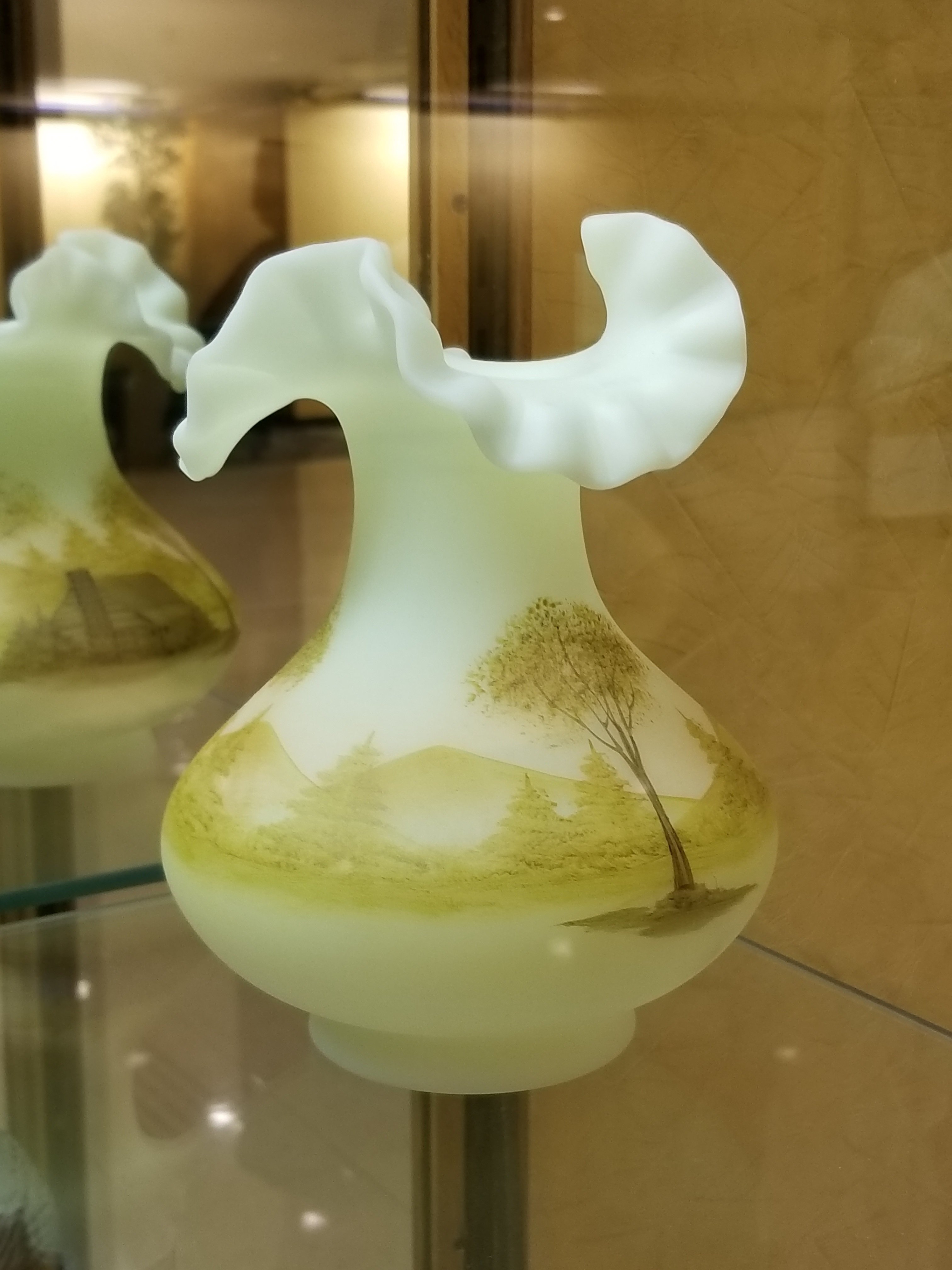 "Humphrey Mine" by Ben Freedman. Acrylic painting on canvas. On display on the second floor of the Mountainlair down the hall to the right after coming up the main stairs. In the permanent Mountainlair Collection. 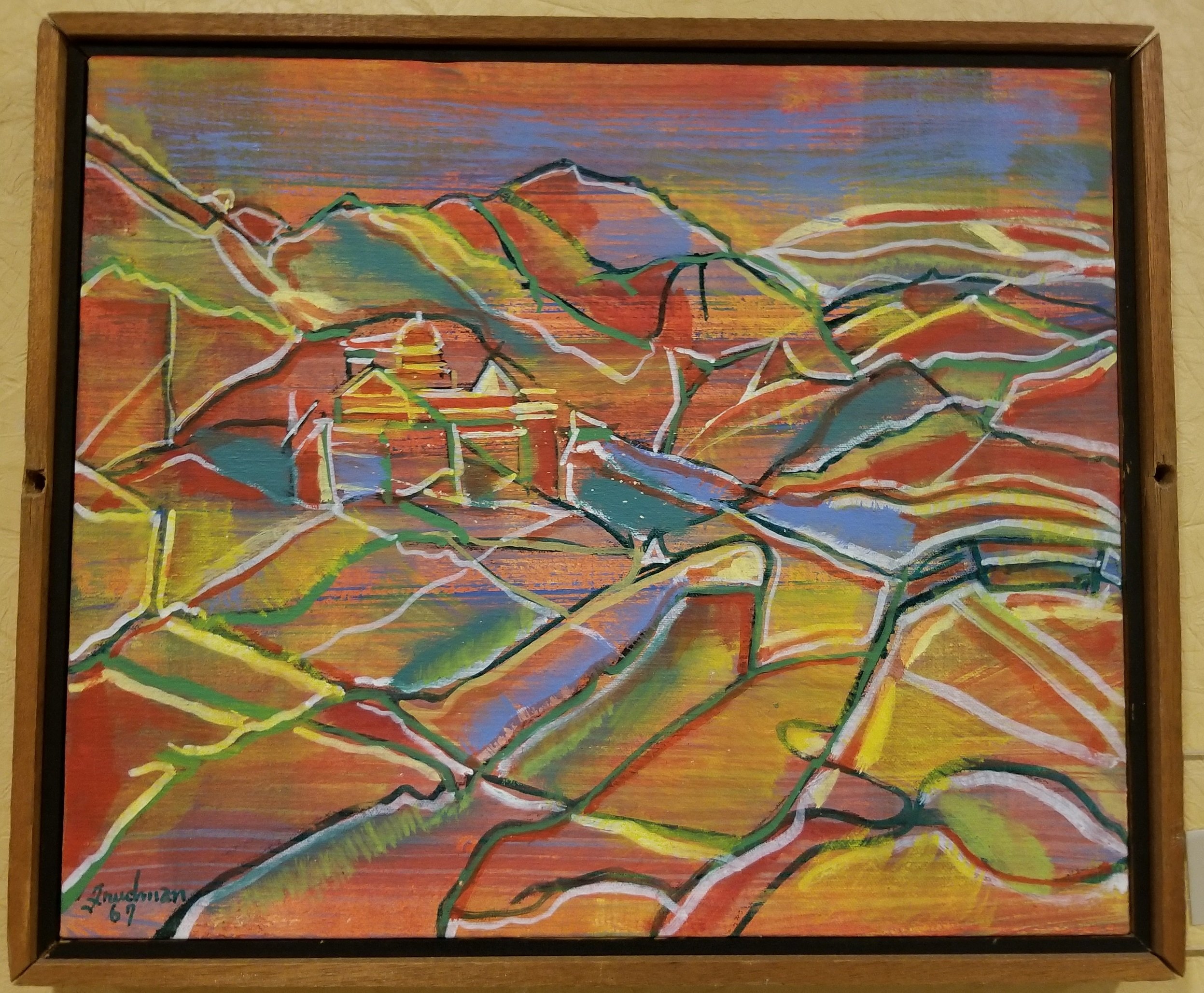 The first Mountainlair building opened on campus on May 15, 1948. The initial structure was a temporary building acquired by the University as part of the federal government's post-World War II surplus property disposal program. The student union building was formerly a recreation center at a Virginian naval base, so it came equipped with a bowling alley, snack bar, ballroom, ping pong table, and, most importantly, space for meetings and social gatherings to occur.

Due to the burgeoning student population in the postwar era, it was known that the temporary Mountainlair would need to be eventually replaced by a larger structure. The University originally charged admission fees for many student activities at the Mountainlair; this practice was then dropped in favor of an activity fee collected from all registered students. In 1955, the Board of Governors adopted a $3.00 student fee per semester that would be set aside to fund the eventual construction of the new student union building. In March 1958, that fund exceeded $55,000.

During the 1960 WVU campus facelift, a multi-million-dollar complex was slated to replace the old student union. The new three-story, $3 million Mountainlair was built at the current University Avenue location, across from historic Woodburn Circle. Dedication of the new building in the fall of 1968 brought new traditions and memories to the campus of West Virginia University. The Mountainlair quickly became the hub of activity on the downtown campus with more than 25,000 people passing through its doors each day.

In 1988, work began on a $4.9 million renovation project that added 30,000 square feet of space to the building. This resulted in increased space and a completely new building front. However, the former portico and balcony were maintained and incorporated into the new structure. The originally outdoor columns can now be seen demarcating the divide between the older and newer sections of the Lair. The new structure also increased the amount of natural light in the Lair as a two-level glass-enclosed food court replaced the outside Sunken Gardens. The new Mountainlair ended up at 220,000 square feet, hosted 10,000 events per year and was utilized by 35,000 people per weekday during the academic year. Following this renovation, the Mountainlair was featured as one of the 22 Most Outstanding College Facilities in the world by the Association of College Unions International.

The Mountainlair is now the home to many services and programs that foster a lively student community. The longest-running tradition is Mountaineer Week, established in 1947 by former Governor Arc Moore, who at the time was the student body president of WVU. Mountaineer Week celebrates Appalachian heritage with music, art, food, games, and friendly competitions like a fiddle contest and the PRT cram. Another famous program is "WVUp All Night," designed to provide a safe socializing environment for students during weekends. The program is held every Friday-Saturday during the Fall and Spring semesters and has been a Mountainlair staple since 1998. The University provides free food/drinks and entertainment (laser tag, game shows, astro bowling, comedy caravans, casino night, etc.). The program has garnered attention as a solution for reducing alcohol consumption and partying on college campuses.

The Lair also contains the Mountainlair Permanent Art Collection. The collection was conceived in 1968 as a way to showcase the educational and cultural values fostered by a modern university in West Virginia. The Mountainlair Art Collection includes approximately two hundred pieces of traditional and modern artwork. Some pieces are also reflective of the state’s culture outside of the University, both past and present, and have heavy Appalachian themes. Pottery, stained glass, weaving, woodcrafts, quilting, glass works, paintings, and mixed media are all part of the collection. Each piece of art displayed in the Mountainlair was judged and chosen by a committee based on its supreme quality and relevance.