The Round Church, Richmond, Vermont

Constructed between 1812 and 1813, this sixteen-sided building was designed to function as both the local government building and the place of worship for five different Protestant denominations. Unlike normal meeting houses of the period, which were rectangular in design, this church is 16-sided which led to many referring to the structure as the Round Church. Local builder and architect William Rhodes designed and supervised the building's construction from 1812-1813. The structure continued to function as both a civil and religious meetinghouse until structural problems led to its closure in 1973. Recognizing the historic value of the building, the city deeded the church to the Richmond Historical Society and the organization raised funds to restore and preserve the building. Today the church is open every day in the summer and fall thanks to local volunteers who offer free tours that include information about the history of the community.

Round Church, exterior. A number of local legends exist about the shape of the Round Church, including making it impossible for an enemy to hide around the corner. 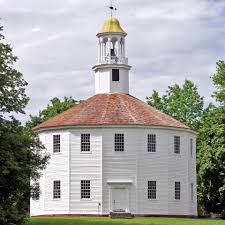 Round Church, interior. The church was renovated in the 1970s and once again in 2005, repairing the roof and repainting the entire building. 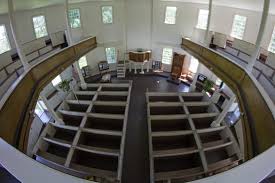 The Round Church, also called the Old Round Church, was designed by local builder and architect William Rhodes who constructed the Church from 1812-1813. His design was not only unique, but serves as one of the few surviving examples of a multi-purpose meetinghouse from the early 19th century. The National Park Services place the Round Church on the National Register of Historic places in 1974 for its social and religious importance.

When the town of Richmond, Vermont was incorporated in 1794 discussions began on where they would place their meeting house. The issue was controversial as each part of the town wanted the meetinghouse closer to them and was only settled in 1812 when Thomas Whitcomb and Isaac Gleason each donate sixty rods. Both men and James Butler were chosen to plan and advertise the new building for various Protestant denominations. William Rhoades led the project as its head carpenter and kept detailed notes on the construction in his journal. Paid $3,000 to construct the building, Rhodes raised funds by selling pews to the local denominations. There is no evidence that work was done on two similar churches in New Hampshire years prior influenced Rhodes. By 1815, one of these congregations also created a sixteen-sided church, but it is unknown if Rhodes inspired or gave instructions to its construction. Following a split in the church, the Claremont Round Church was demolished in 1852.

By 1843, the Baptist Church of Christ ceased to meet in Richmond, while in 1845 the Congregationalists began planning the construction of their own church, with work beginning in 1850. Similarly, the Universalists also left to create their own church in 1879, while the Methodists stopped using the building in 1885. The Round Church continued to serve as the local government building until 1973, when problems with the building’s structure forced its closing as a public meeting place. Three years later, in 1976, it was decided by a town meeting to lease the church’s deed to the Richmond Historical Society for forty years. The Church reopened after raising $180,000 to restore the building and remains open in the summer and fall for free. The church was leased to the Richmond Historical Society again in 2016 for another forty years.