After the War of 1812, a series of forts and arsenals, primarily on the Canadian border and coastline, were constructed for the defense of the Maine territory. Uniquely the arsenal in Augusta, Maine is located inland because of its central location on the Kennebec River. Built from 1820 to 1838 the arsenal comprised several buildings near the Kennebec River to move materials efficiently. The arsenal’s design was not changed until 1905 when it was renovated to become a mental hospital. This building is the only remaining structure of this type from pre-1840 and was named a historical site in 1970 but is currently closed and abandoned.

The Kennebec Arsenal. The current owners of the arsenal closed the site due to fears of illegal activity on the property. 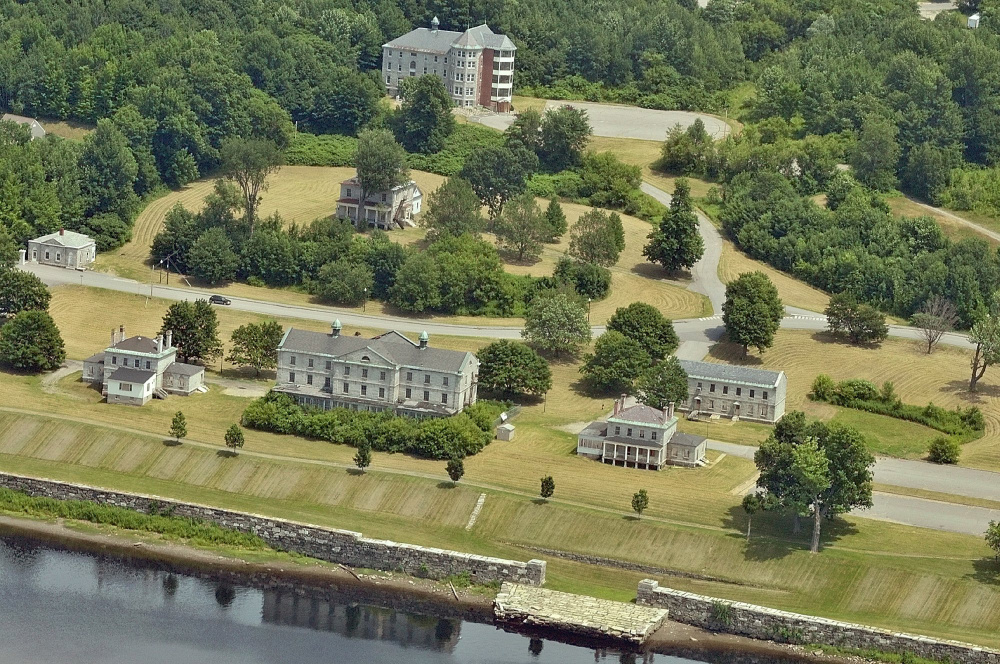 Kennebec Arsenal in Augusta, Maine and was constructed from 1828 to 1838 in response to the War of 1812. Maine was an easy target for the British in the event of another war because of its proximity to Canada and long coastline that was difficult to defend. In 1820 the newly formed State of Maine was capable of preparing defenses that the government in Massachusetts could not resolve. In 1821 the State Government began planning defenses for the entire State, but they knew it was going to take time, so they focused their efforts on disputed areas and the coastline.

By 1827 Congress authorized the creation of an arsenal in Augusta because of the central location of the Kennebec River, and within a month Augusta became the new state capital from the same reason. That summer, Major George Talcott surveyed the area to find a suitable location for the arsenal. Thirty acres were purchased to create “an arsenal and other public buildings” allowing construction to begin. Funding for the arsenal doubled from $15,000 to $30,000, because of the vulnerability of Maine and the likelihood a war would start in the region.

The arsenal's cornerstone was laid in June 1828 while work continued until the arsenal was completed in 1838. No major change was made in the building's design until 1905 when the Coombs & Gibbs company was hired to renovate the building into a mental hospital. No records remain of the arsenal's original interior, but the design shows it to be an open Greek Revival building. Built close to the river, for ease of moving materials, able to contain “2,640 boxes of rifles on the first floor, 2,376 boxes on the second floor, and 2,112 boxes on the third floor”. The original 1827 plans for the building also included both officer’s quarters and the use of granite in construction. Other than the main building the arsenal also has a wall and gate, an office building, two additional officer’s courters, and a barracks building, all of which were built during the same period. By 1829 Congress further increased funding to the arsenal to $45,000 to help with the ongoing construction. The Arsenal building is the only pre-1840 structures of its type across the nation that has survived. The National Park Service placed the Kennebec Arsenal on the National Register of Historical places on August 25, 1970, and today stands closed and abandoned.