This Neoclassical home is a unique building in Weirton, West Virginia because of its architectural and medical history. Constructed in 1936-37, Dr. Rigas lived in this house until his death in 1957. Born in Greece Rigas studied medicine in Athens and Paris before moving to the United States after hearing about the need for doctors in growing industrial areas. He hired E.R. Watson to design a new house for him, his wife, and her family to live in, once it was completed he moved his practice to be closer to his new residence. His home continued to be inhabited by his widow until her death in 2001, and today still functions as a home. His house was placed on the National Register of Historic Places in 2004 for its importance in architecture and medicine.

The Dr. George Rigas House. Like most of Weirton's citizens, Rigas was an immigrant from Europe drawn to Weirton by the growing steel industry. 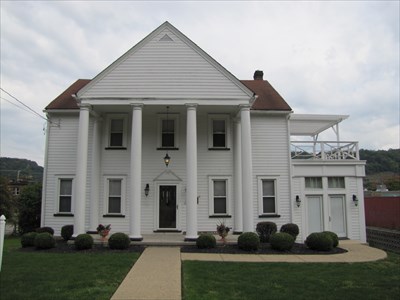 The Dr. George Rigas House, located at 3412 West Street in Weirton, West Virginia, has been occupied since it was completed in 1937. Dr. Rigas hired the architect who designed the home after seeing their other work during a trip to Charleston, South Carolina with his wife. The Nation Park Service placed his home on the National Register of Historic Places in 2004 for its architectural and medical importance. Designed using both the Neoclassical and Georgian styles, which were popular at the time, making it a unique home in Weirton. The two and a half story home was built using mainly using brick and wood has been maintained since its construction without any major additions. Dr. Rigas lived in the house until his death in 1957, from illness, his wife continued to live in the house until 2001.

Born in Kalymnos, Greece in 1895 George Rigas received his medical degree from the National University of Athens School of medicine in 1915. Taking an internship in Athens for two years, once finished in 1917 he moved to Paris, France for postgraduate studies. Rigas returned to Kalymnos in 1918 to open his private practice. He heard about the growing population in northern West Virginia, because of the steel industry, from a relative who lived in the United States. Dr. Rigas moved to Weirton, West Virginia in 1921 both to provide medical services and to help his father get out of debt, finally opening his practice in 1923. In 1935 he married Pauline Petrides and the next year he hired E.R. Watson to design a new house for him. Purchasing and destroying an existing house construction of his new home began in 1936 and was finished by 1937. After moving into the house with his wife, and her family, Dr. Rigas also moved his practice closer to his new home.

Dr. Rigas was an important citizen of Weirton who spoke at public events and joined several local organizations. Organizations included the “Pan-Rhodian Society, American Medical Association, West Virginia State Medical Society, and the Hancock County Medical Association,” all of which he was a member until his death. He worked as a doctor at Ohio Valley Hospital and Weirton General Hospital alongside his private practice. He and other helped in the creation of the All Saints Orthodox Church in Weirton. Dr. Rigas was too old to be draft, unlike others, making him one of the few doctors in Weirton during World War 2.

"History of Weirton" The City of Weirton, accessed August 3, 2018, https://www.cityofweirton.com/263/History-of-Weirton