This historical marker commemorates the achievements of Birmingham attorney and civil rights activist, Arthur Davis Shores. After attending only one year of formal law school at the University of Kansas, Shores passed the Alabama Bar exam in 1937. He won a number of victories for Black plaintiffs, including a 1938 decision for Black teachers who had not been allowed to vote and the 1955 case that led to Autherine Lucy's admission to the University of Alabama. He endured threats of violence for his efforts to represent prominent Civil Rights leaders, including Dr. Martin Luther King Jr. For example, white supremacists detonated explosives at his home in 1963 for his efforts to desegregate the schools of Birmingham. The marker is located on the north side of the Arthur D. Shores Law Center Building that was named in his honor. 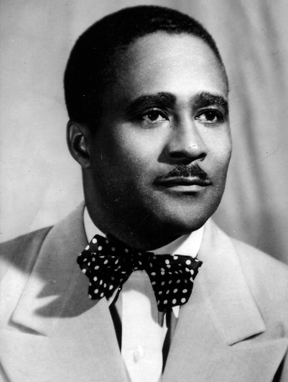 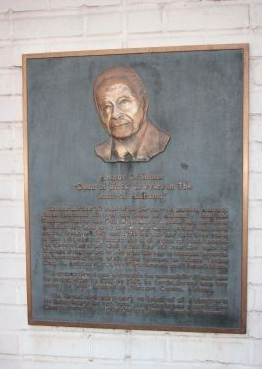 Located on the Fifth Avenue side of the Arthur Davis Shores Law Center Building, this marker commemorates attorney and civil rights activist, Arthur D. Shores. Shores was born in 1903 in Birmingham and completed his bachelor’s degree at Talladega College in 1927. After one year of law school at the University of Kansas, he completed his law degree through extension courses at LaSalle and passed the bar.

Shores was an integral part of the Black community in Birmingham. He is best known today for his efforts as a civil rights attorney who challenged exclusion, disfranchisement, and racial segregation. Between 1955 and 1956, he represented Autherine Lucy in a successful lawsuit that forced the University of Alabama to desegregate. Unfortunately for Lucy and other African Americans, the university decided to suspend Lucy in the wake of protests and violence by white supremacists.

Arthur D. Shores was also an important part of the 1963 Birmingham Civil Rights movement. As a member of the National Association for the Advancement of Colored People (NAACP), Shores defended many individuals who were arrested for protesting peacefully. Some of these protesters included leaders such as Martin Luther King, Jr., and Fred Shuttlesworth.

Another highlight of Shores’ career was his representation of L. and N. Railroad fireman Bester Steele in a case that was heard by the Supreme Court. Bester Steele had been released from his job and then rehired to do more strenuous work while being paid less money while his original job at been given to a white individual. This case provided evidence and arguments that formed Title VII of the Civil Rights Act of 1964 which prohibits any discrimination against an individual based on their race, religion, or gender in the United States.

Many of Arthur D. Shores successes were faced with violence from many whites. Shores home and his community were bombed multiple times by white supremacists. Due to the number of bombings, many people began to call this local community “Dynamited Hill” while the city was known as "Bombingham." Shores had to guard his house with a shotgun because the local police officials would not hold the guilty parties accountable for their actions.

In 1969, Shores was appointed to the City Council where he served the community for nine years. In order to celebrate Shores' significance in the civil rights movement, the University of Alabama awarded Shores with an honorary doctorate in 1975. On December 16, 1996, Arthur D. Shores died in Birmingham, Alabama, the city where he accomplished most of his successes. In 2004, Shores was inducted into the Alabama Lawyer’s Hall of Fame. The Arthur D. Shores Law Center Building was named in the attorney’s honor.