Founded in 1937, Putnam Stadium is a historic football stadium located in Ashland, Kentucky. Putnam Stadium was built by the Public Works Administration, a New Deal Agency. The stadium hosts the home football games of the multi-time state champion Ashland Tomcats. After undergoing significant renovations in 2014, the stadium is primed to continue its longstanding tradition as one of the premier stadiums in Kentucky. 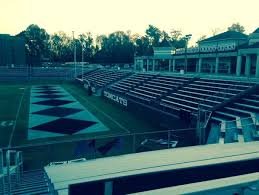 The Public Works Administration (PWA) was founded as part of the New Deal in 1933. This agency intended to create significant construction projects as an effort to decrease unemployment. In Ashland, the PWA focused on building a venue that could uplift the local community. According to The Living New Deal, Putnam Stadium was built at a cost of approximately $6,500.00.

Putnam Stadium underwent major renovations beginning early 2014.  Bleachers, locker rooms, and concession stands were all rebuilt in an attempt to modernize the proud stadium. Renovations were made possible thanks to the support of local donors, many of whom have their names listed within the stadium. A statue of former Tomcat coach Herb Conley stands in front of these donors’ names. The beginning stages of renovations for the “new” Putnam Stadium were completed in time for the start of the 2014 Tomcat football season.

Putnam Stadium is a gathering place for the local Ashland area. High school football games at the stadium provide entertainment and a sense of community. Putnam Stadium is able to serve as a bridge between generations due to its longevity.