The Kansas City branch of the Jackson County Courthouse was established in 1872. The current building was constructed in 1934 under Presiding Judge and future president Harry Truman. The ornate, Art Deco building was one of several structures built during the 1930s as part of a “Ten Year Plan” to sustain economic growth and provide employment in Kansas City during the Great Depression. Today the building primarily houses facilities for both municipal court and the Missouri 16th Judicial Circuit Court. 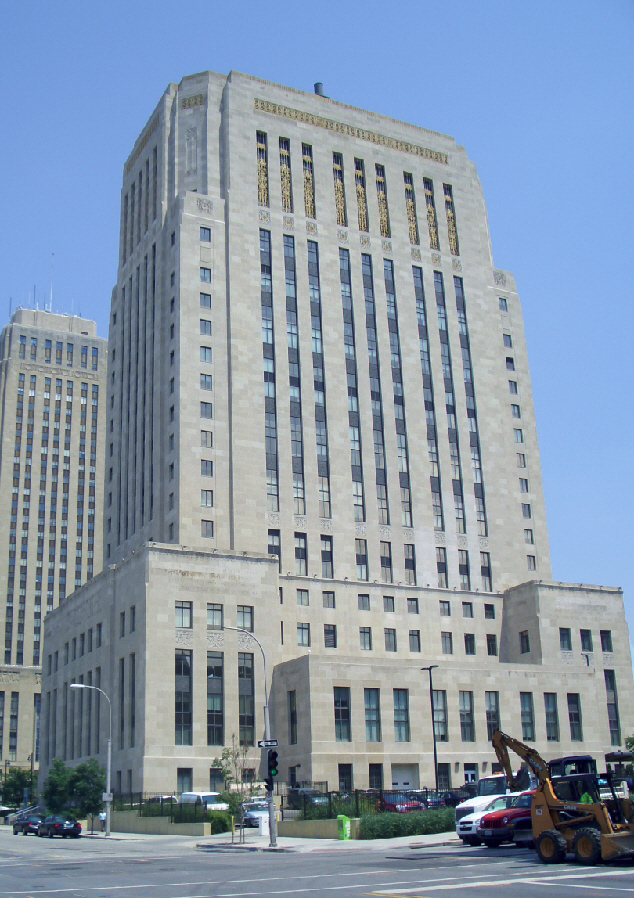 The first courthouse in Kansas City stood on Second and Main Streets from 1872 until a tornado destroyed the top two floors in 1886. Image courtesy of the Missouri Valley Special Collections. 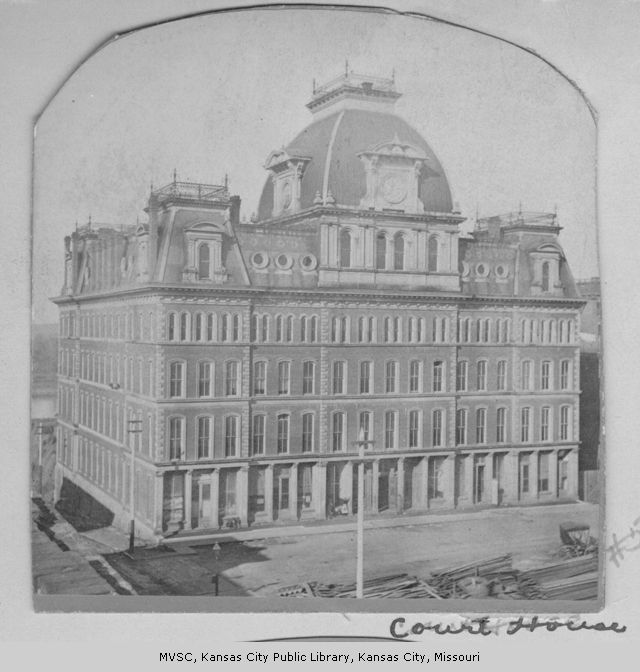 The second courthouse was built at Fifth and Oak Streets in 1892 and remained in use until 1934. Image courtesy of the Missouri Valley Special Collections. 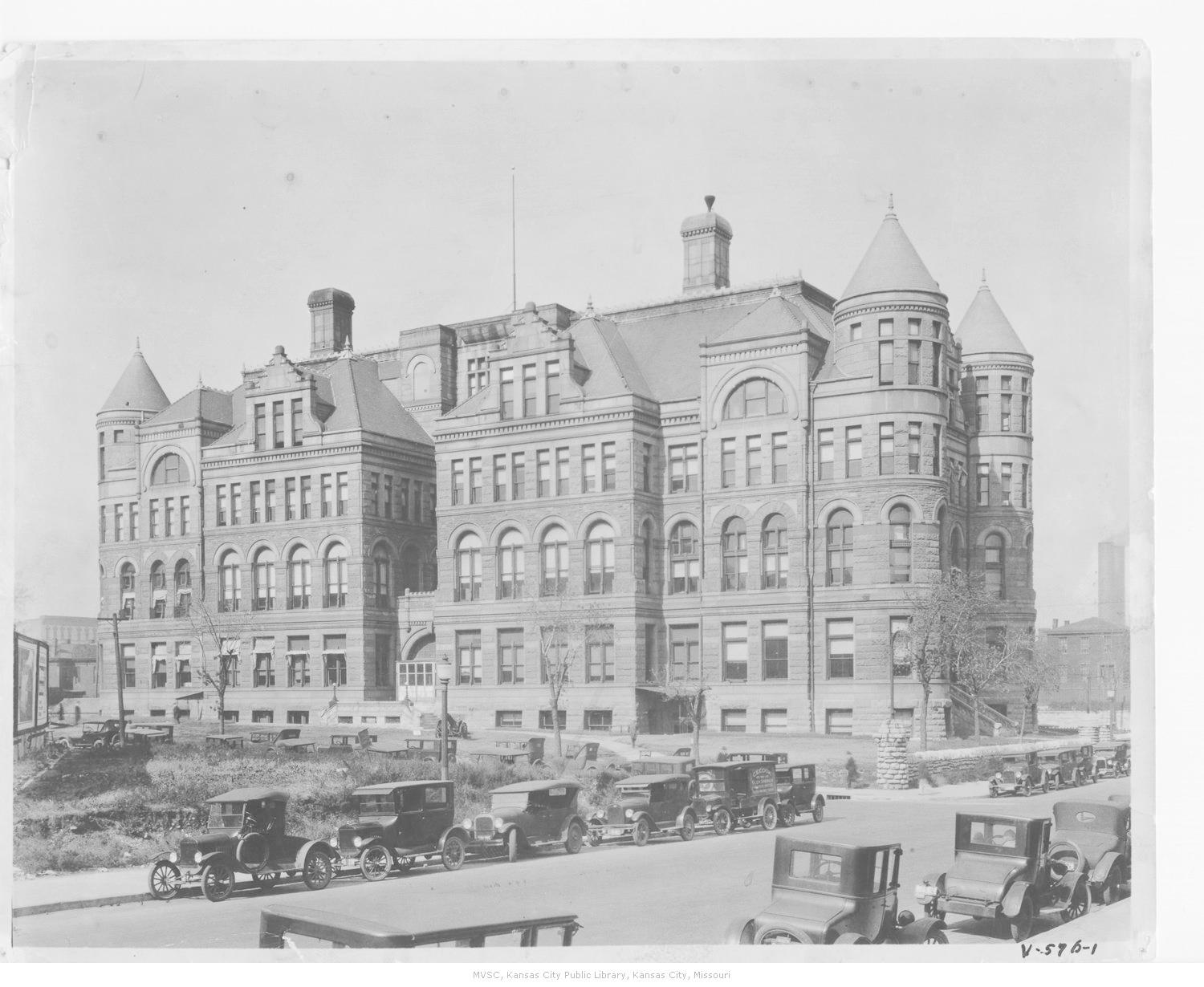 The current courthouse was constructed in 1934 in the Art Deco style. Image courtesy of the Missouri Valley Special Collections. 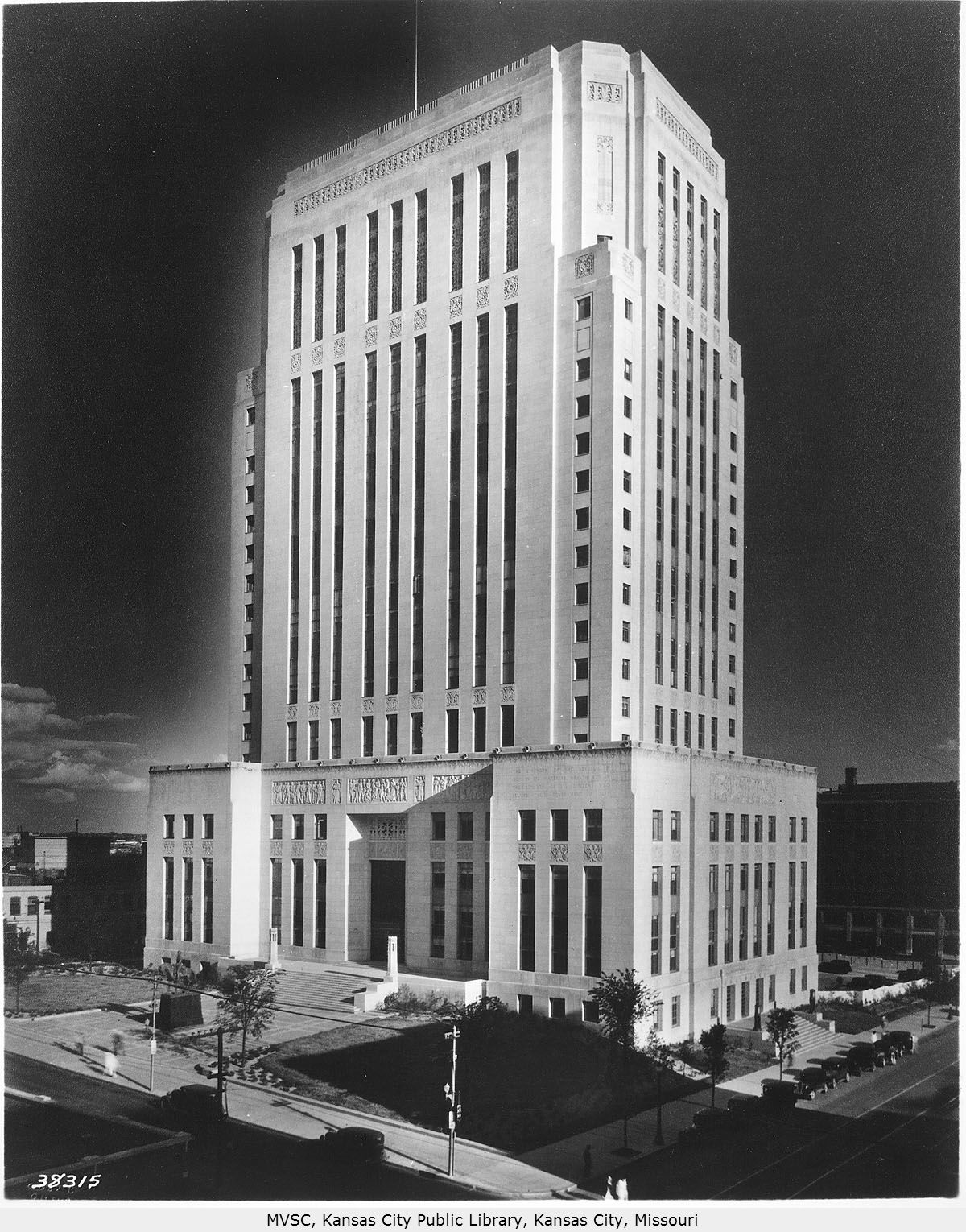 A statue in front of the main entrance depicts Andrew Jackson, the celebrated War of 1812 veteran, seventh President of the United States, and namesake of Jackson County, Missouri. Image obtained from presidentusa.net. 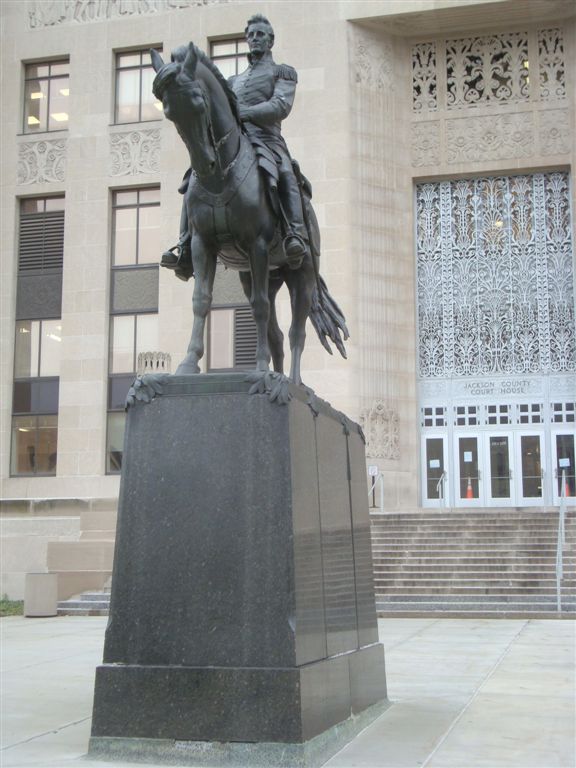 The 16th Circuit Court traces its origins back to 1826 when it was established as the First Judicial Circuit Court. At first its jurisdiction included half of the State of Missouri, but now only comprises Jackson County. The first courthouse was built in Independence, the Jackson County seat, in 1827. By the 1870s the rapid growth of Kansas City made it necessary to open a branch of the courthouse there to accommodate the increasing demand for court business. In 1872 an unfinished hotel building was purchased on Second and Main Streets and converted into Kansas City’s first courthouse. A tornado badly damaged the courthouse in 1886, creating the need for a new one. A replacement courthouse was built at Fifth and Oak Streets in 1892. By the 1920s it had become too small to suit the city’s needs, and also posed a fire hazard.

In 1926 future president Harry S. Truman was elected Presiding Judge of Jackson County, a position he would hold for the next eight years before he was elected to the U.S. Senate. During his judgeship, Truman supported the construction of a new, larger courthouse in Kansas City. In 1931 voters overwhelmingly approved a $40 million bond to pay for what was known as the “Ten Year Plan.” The plan called for the improvement of infrastructure and the construction of several new public buildings. Meant to boost the city’s economy during the Great Depression, the program provided employment to everyone from construction workers to architects. $4 million was set aside for the Jackson County Courthouse. Other public buildings created under the project included the Municipal Auditorium and City Hall.

Truman was reported to have traveled across the country, examining various courthouses to find an ideal design for Kansas City. He took a liking to the courthouse in Caddo Parish, Louisiana, and sought to have Kansas City’s courthouse styled similar to it. The architectural firms of Wight & Wight, Keene & Simpson, and Frederick C. Gunn each worked on the structure, designing it in the Art Deco style. The limestone-clad building contained fourteen floors and featured very detailed ornamentation both on the inside and outside. Examples include exterior friezes depicting Contentment, Peace, Mercy, and Law; interior medallions depicting Progress, Authority, Faith, Justice, and Aspiration; marble columnns, and metal plaques. A statue of President Andrew Jackson, the county namesake, was sculpted by Charles Keck and placed in front of the building. The courthouse was dedicated in a ceremony on December 27, 1934 with Harry Truman presiding. When it first opened the courthouse contained county government offices, courts, overnight accommodations for jurors, the county jail, and an execution chamber.

Kansas City’s Jackson County Courthouse remains in operation today, and is the seat for the majority of the 16th Circuit Court’s judges. In the early 1980s, renovations to update the courthouse resulted in asbestos being dispersed around the building and exposed to the public. The exposure and threat of asbestos-related diseases such as mesothelioma led to a class-action lawsuit being filed against Jackson County and U.S. Engineering, the company in charge of the renovations, in 2010. An $80 million settlement was agreed to in 2016. The courthouse underwent another series of renovations in 2005, this time to redevelop the landscape and repair the exterior.

This walking tour makes a loop through downtown Kansas City, Missouri and includes highlights of the city including historic buildings, markers and monuments, and several of the city's trademark fountains. The tour concludes at the location of a historic hotel that is now home to several popular bars and eateries. Enjoy!