Armory of the First Corps of Cadet

The Armory of the First Corps of Cadets in northern Boston, Massachusetts is a formidable structure located on the wedge-shaped corner of Arlington Street and Columbus Avenue. Standing proudly above the modern city that surrounds it, the Armory has been a well-respected local and national landmark for over 100 years. Completing its construction in 1897, the Armory was designed to be a military stronghold in the case of severe civil unrest. It has been preserved remarkably well, its castle-like appearance proving to be a dominant feature of the local area. The Armory’s lower floors house a luxury steakhouse known as Smith and Wollensky while the upper levels are home to a simple museum that houses numerous historical antiques relevant to the First Corps of Cadets. Throughout its long lifetime, it has been referred to by a number of names including the “Back Bay Castle,” the “Park Plaza Castle,” and it is open to the public during regular restaurant hours.

Photograph by Thomas Kelley, submitted to Wikimedia Foundation on 12 June 2008 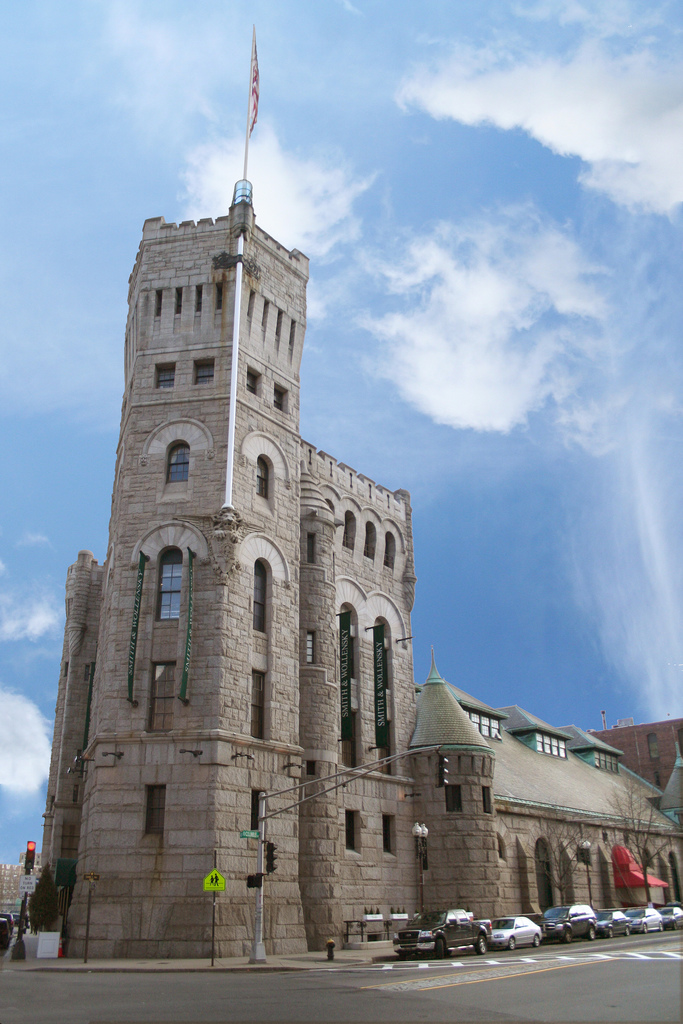 The Armory was built in 1897 by respected architect William Gibbons Preston, whose work was visible all across Boston and New York, largely in the form of public buildings.  Preston’s most well-known structures include the Museum of Natural History in Boston and the Rogers Building at MIT.
It was the National Guard who called upon William G. Preston, who was once himself a member of the Corps, to construct the Armory at the turn of the century as part of a wave of National Guard structures intended to mitigate the potential damage from armed mobs in New England and other major cities.  Governmental concern for civil unrest stemmed from a number of severe riots and strikes over the course of the preceding decade, many of which ended in violence.

The Armory itself never saw active use in any circumstance of civil unrest, and, as a result, came to be used for other purposes throughout the 1900s.  The First Corps of Cadets, also known as the Company of Gentlemen Cadets, however, would go on to become one of the first official units of the National Guard.  The First Corps of Cadets was converted in 1962 to the First Battalion, 220th Infantry, of the National Guard, just shortly before the Armory itself was immortalized on the National Park Service’s National Register of Historic Places.

The Armory has been at various times a military history museum, a Boston history museum, a library, and, most recently, a luxury restaurant.  The Armory structure was purchased in the early 1900s by famed hotelier E.M.Statler, who constructed the Boston Park Plaza Hotel next door to the Armory.  The hotel leadership kept both buildings in fantastic condition and, in fact, used the Armory as a stately banquet hall until 2014, at which point it was taken over by Smith and Wollensky.

The Armory was designed in the Romanesque Revival style, which is primarily associated with a rebirth of styles from medieval Europe.  This style was incredibly popular in the mid- to late-1800s, with other notable examples including the Smithsonian of Washington, D.C. and the famous Archdiocesan Cathedral of the Holy Trinity in New York City.  It has also been referred to as one of the only remaining “High Victorian” armories in the country, being the only remaining of such structures in Boston.

As of today, the Armory of the First Corps of Cadets finds itself recorded within and protected by the recommendations of the National Register of Historic Places, the Boston Landmarks Commission, the National Trust for Historic Preservation, and, by extension, the Historic Hotels of America.  The early appreciation for the Armory’s historical significance has certainly contributed to its fantastic preservation, both inside and out.  As a result, the Armory stands today as a testament to the incredible architectural mosaic of Boston.

Armory of the First Corps of Cadets. WhereTraveler.com. . Accessed July 22, 2018. https://www.wheretraveler.com/boston/armory-first-corps-cadets. Small profile of the Armory

Boston Back Bay. Smith and Wollensky. . Accessed July 22, 2018. https://www.smithandwollensky.com/our-restaurants/boston-back-bay/. Home website of the restaurant within the Armory