This antenna is a replica of the original used by Karl Jansky to make the first successful detection of radio waves from space. Jansky's only contribution to radio astronomy was in 1932, but his work inspired other to continue his research. Grote Reber recommended the creation of this replica to National Radio Astronomy Observatory in Green Bank, West Virginia. The NRAO created a lectureship program in his honor, awarded annually to scientists who contribute to radio astronomy. Today the Jansky Antenna Replica is located at the entrance to the Green Bank Observatory beside the Reber Telescope.

Karl Jansky, Since the creation of the Jansky Lectureship a total of 51 people have been awarded the honor. 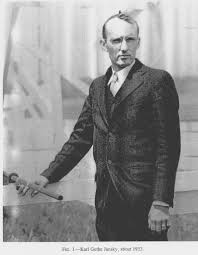 Jansky's original antenna, While Jansky's findings were popular the economic situation of the Great Depression meant observatories could not immediately continue his research. 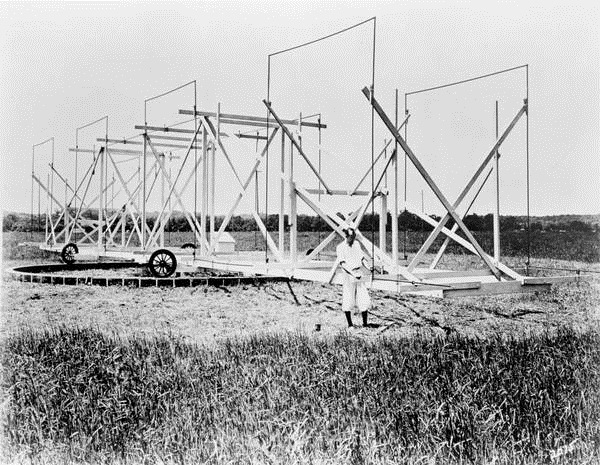 Born on October 22, 1905, in Norman Oklahoma Karl Jansky earned a physics degree from Wisconsin University and was hired by Bell Telephone Laboratories in 1928. He began investigating possible interference on a radio-based “transatlantic phone service” that his company was developing. This antenna was the first designed by Jansky in 1931, its turntable design earned it the nickname “Jansky’s merry-go-round” and gave it the ability to detect the direction of signals. After months of research, he discovered three origins for static interference, local thunderstorms, distant thunderstorms, and a then unknown source. Spending a year researching this third source, which rose and fell between days, he initially suspected it was the sun. Jansky published his discovery of interference from the galactic core nationwide in 1933. Bell Industries denied Jansky's request for further research into radio waves from space with a larger telescope because it had nothing to with developing a radio-based phone service.

Jansky’s work earned him the title “the Father of Radio Astronomy” and inspired the foundations of radio astronomy through the work of Grote Reber and John Kraus. Reber constructed a telescope in 1937 which he used to confirm Jansky's original findings. Kraus constructed an observatory at Ohio State University and wrote a text nicknamed "the Bible of Radio Astronomy" while there. During the reconstruction of the Reber telescope, under the supervision of Grote Reber, at the National Radio Astronomy Observatory in Green Bank, West Virginia, Reber suggested they also construct a replica of the antenna used by Jansky. Recreated to the exact specifications used by Jansky including the use of Model-T car tires for rotation.

The NRAO created an annual lectureship program in 1966 that recognizes the advancements in radio astronomy, during which the recipient gives the lectures in both Charlottesville, Virginia and Socorro, New Mexico. Bell Labs constructed a scaled model of the antenna as a memorial to Jansky. The NRAO's main laboratory and office, the Very Large Array in Socorro County, New Mexico, and the unit of brightness used in radio astronomy are all named after Jansky. Today the Jansky Anttena Replica is located at the entrance of the Green Bank Observatory next to the Reber Telescope.