Fort Pillow State Park is located on 1,642 acres in Henning, Tennesse, and was the site of the 1864 Battle of Fort Pillow. The fort was constructed in 1861 near a bend in the Mississippi River. The battle saw outnumbered Union troops surrender to Confederate forces under Nathan Bedford Forrest. The battle concluded with the massacre of nearly 300 African American soldiers and some of their white officers after they surrendered. Several Confederate veterans recalled the decision to kill the black soldiers rather than take them prisoner was ordered by their commander who later became the founder of the Ku Klux Klan. The park was established in 1971 and added to the National Register of Historic Places in 1973. 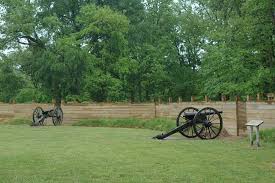 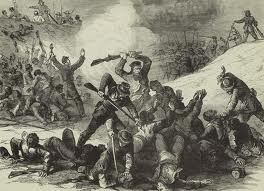 Built in 1861 by Confederate troops, Fort Pillow was named for Confederate General Gideon J. Pillow. Shortly after the fort’s construction, Confederate troops abandoned the fort as the Union army approached along the Mississippi River. The Union army took over the fort leaving it under the command of Major General Stephen A. Hurlbut who was leading the Union in West Tennessee. Four months prior to the infamous Battle of Fort Pillow, also known as the Fort Pillow Massacre, Hurlbut disregarded orders from General William T. Sherman and continued to occupy the fort.

On April 12, 1864 Confederate soldiers led by Major General Nathan Bedford Forrest attacked Fort Pillow which was held by 600 Union troops. The nearly 300 African American Union soldiers were killed at the Battle of Fort Pillow despite the fact that the majority of Union soldiers surrendered as the Confederates approached. The Confederate army lost fewer than twenty soldiers during the encounter. Though Confederate leaders claimed that they had only killed the solders when Union leaders refused to surrender, a federal investigation would later show that both Union and Confederate witnesses testified otherwise.

After the battle the fort was abandoned. Much of the fort was destroyed during the battle and subsequent damage from weather. When the state took over the land in 1971, the inner fort was rebuilt and the outer fortifications were restored. Today, the park’s museum showcases many Civil War artifacts including a canon and interpretive displays relating to the history of Fort Pillow. There is a 12-minute video on the 1864 Battle of Fort Pillow shown by request as well as tours of the museum and restored fortifications. The park also offers a campground with 32 campsites for tent camping. There is a moderately difficult five-mile hiking trail to backcountry camping. Fort Pillow State Park also has a picnic area overlooking Fort Pillow Lake providing visitors with tables and grills.