From 1934-1935, Waterloo High School had only 26 male students enrolled yet they possessed one of the greatest mens basketball teams in the State of Ohio. Waterloo High School was demolished, but this marker preserves the history of the basketball team that was known as the Waterloo Wonders or the Wonder Five. They won two class B state championships in 1934 and 1935. Their winning record was an impressive 94-3. The team defeated many class A schools, as well as, college teams. Four of the five high school players continued on to play professional basketball after they graduated, and the Waterloo Wonders not only beat many teams but filled the stands owing to their reputation for trick plays. 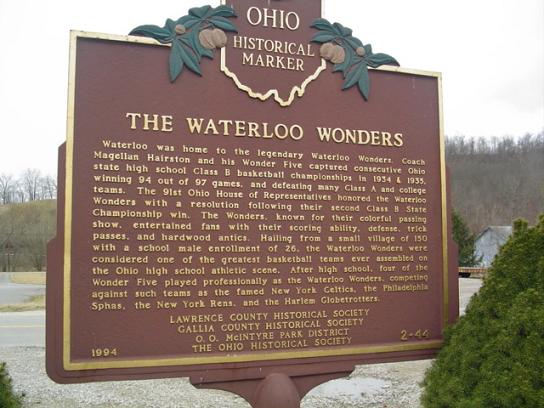 Back of Ohio Historical Marker 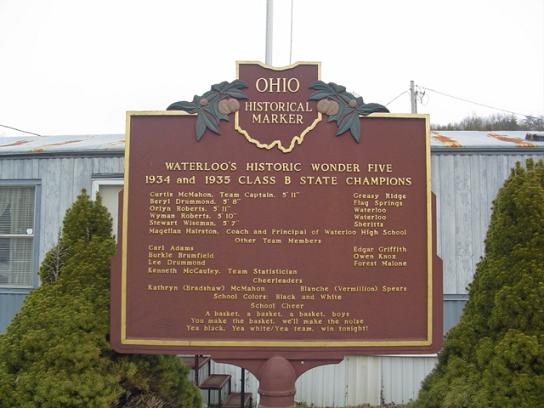 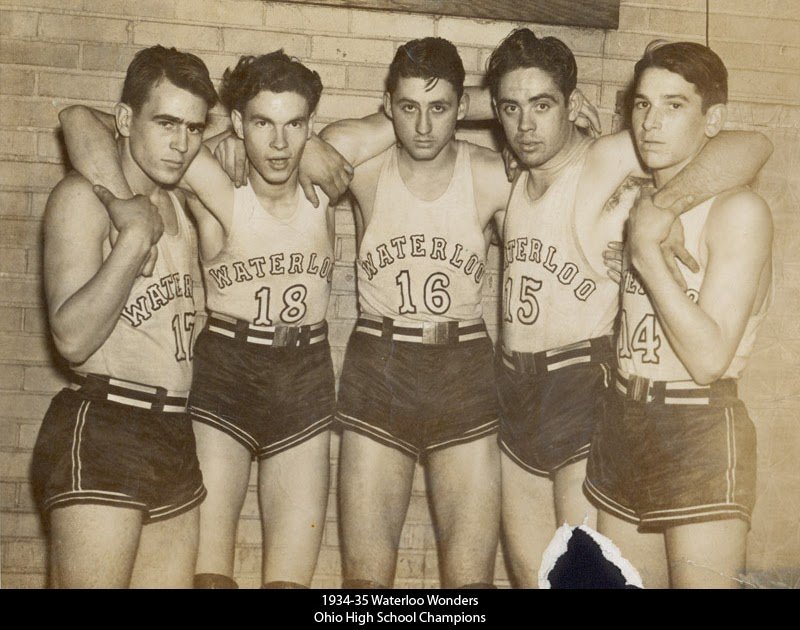 Imagine the Harlem Globetrotters. Now imagine them as five short, white, teenage farm boys. If you can't, then it's fair to assume you don't live anywhere near tiny Waterloo, in the southeastern corner of Ohio." -Thomas Kunkel.

Waterloo High school was formed in 1916 and originally consisted of only one male student and sixteen female students. In 1934 and 1935 the two seasons of the Wonder Five, the school only had 26 male students. The school's mascot was the "Little Generals," but once a sportswriter called the boys "The Wonders" the team became known by that moniker.  Waterloo High School closed in 1960 and now students from the town attend Symmes Valley High School in neighboring Willow Wood, Ohio. The trophy case of that school includes awards that were won by the Wonders.
The Wonder Five consisted of Curtis McMahon, Team Captain, 5'11", Beryl Drummond, 5'8", Orlyn Roberts, 5'11", Wyman Roberts, 5'11", and Steward Wiseman, 5'7." Magellan Hairston, the coach of the team was also the high school principal. To say that these five men and their coach were an excellent basketball team is a bit of an understatement. The Wonder Five played only two seasons of basketball together yet won 97 games and only lost three. The team at one time had a fifty-six game winning streak. The team won the Class B State Championship in 1934 and 1935.
The population of the town at the time was around 150 and even today the town is little more than a post office. The Wonders were not simply significant for their skill, but for their innovation. They were known for entertaining crowds, handing the ball over to defenders to let them have free shots, playing tricks on opponents, and fancy passes that were unseen in the time period. The Waterloo Wonders didn't just win,  they put on a show that even made opposing crowds cheer.
The links below include a Sports Illustrated article, that includes an interview with Wiseman who tells stories about the ways that the team members were forced to innovate owing to their poverty and lack of equipment. After high school, the University of Kentucky offered to recruit the entire team, but only Wiseman attended college. The other four Wonders formed a professional basketball team with the Waterloo Wonders name. They played many teams including the Globetrotters. In 1937, after two losses to the leading pro team during the time, the New York Celtics, the Waterloo Wonders beat the Celtics, 47-39,in front of a crowd of 7,000 in Cleveland.