Grand Vue Park is a county park operated by the Marshall County Parks and Recreation. The park was opened in 1974 and has gone through several stages of development. It was built on 125 acres that was formerly the Marshall County Poor Farm. Land from the former Darwish and Sibert farms was added as well as land from the Dobbs family. Today the park encompasses 650 acres and offers lodging, zip lining, an aerial adventure park, paintball, geocaching, outdoor amphitheater, banquet hall, picnic shelters, aquatic center, golf, playground, walking and biking trails as well as a calendar of events and day camps.

The view of the barn from Shelter #1. (Photo courtesy of Susan Jones) 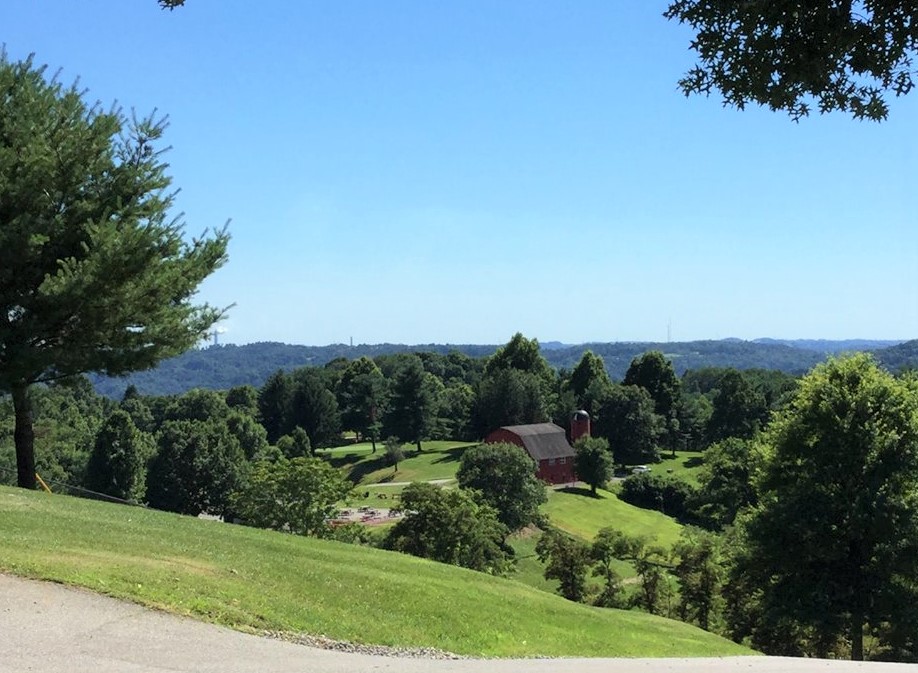 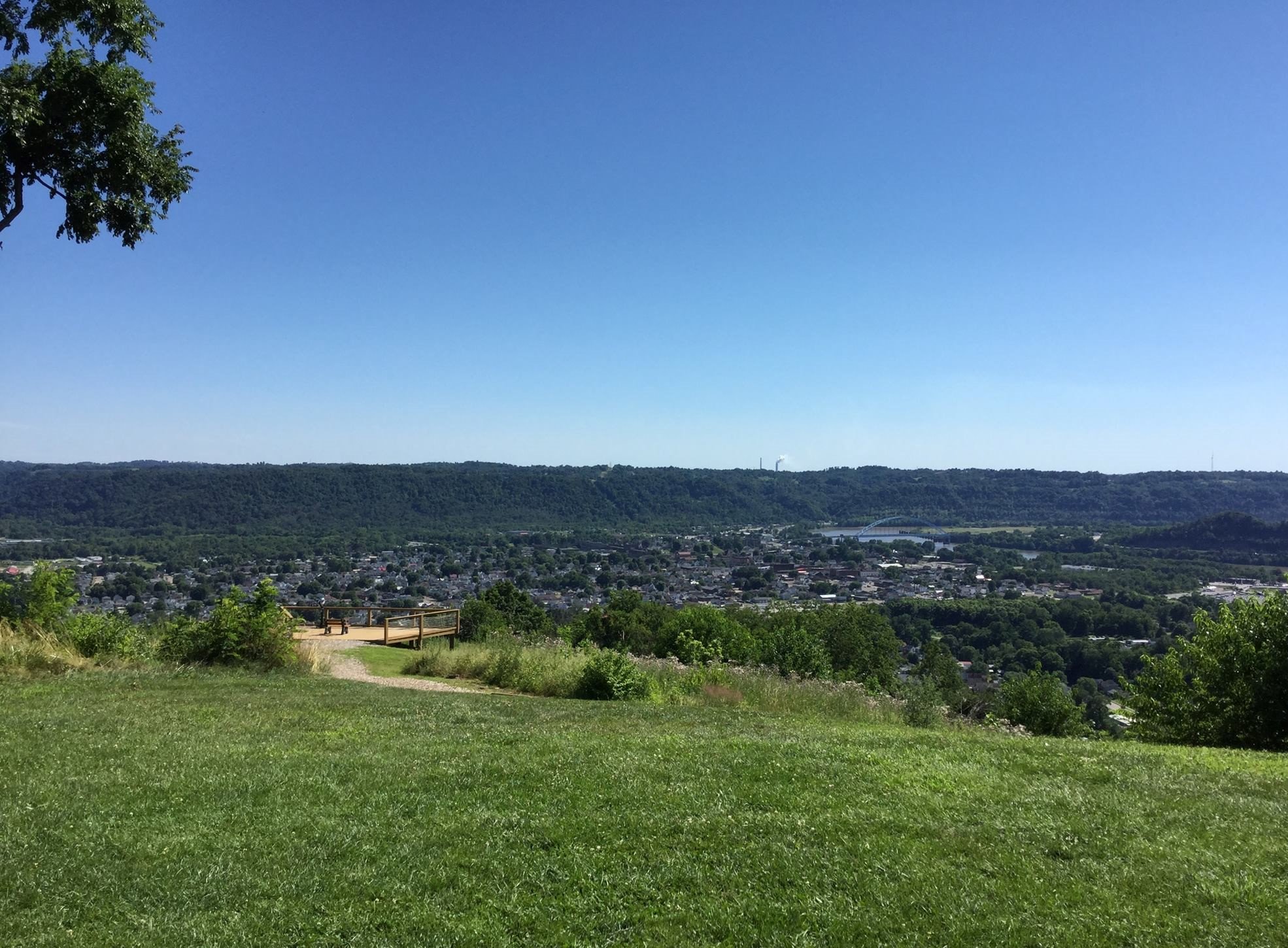 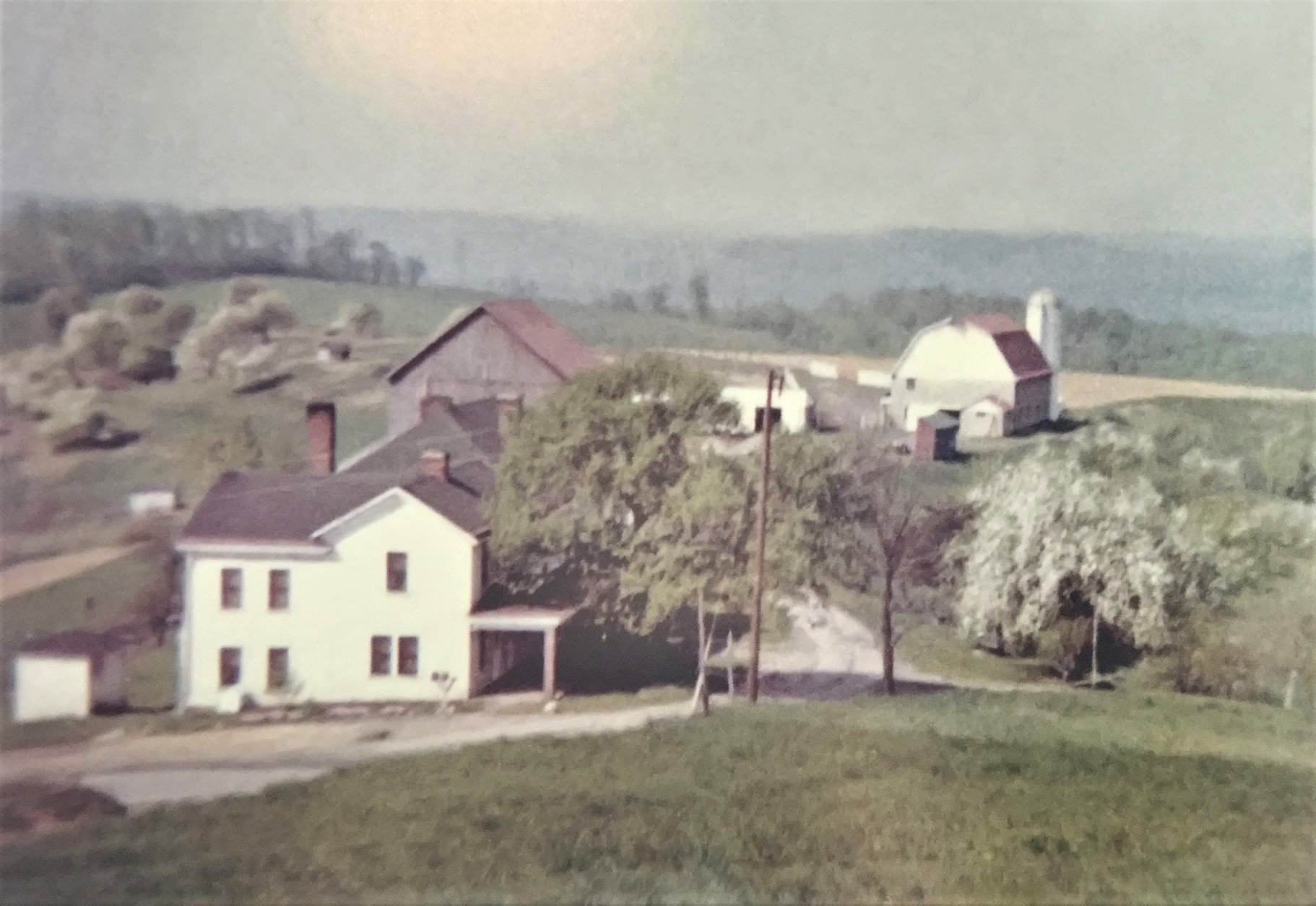 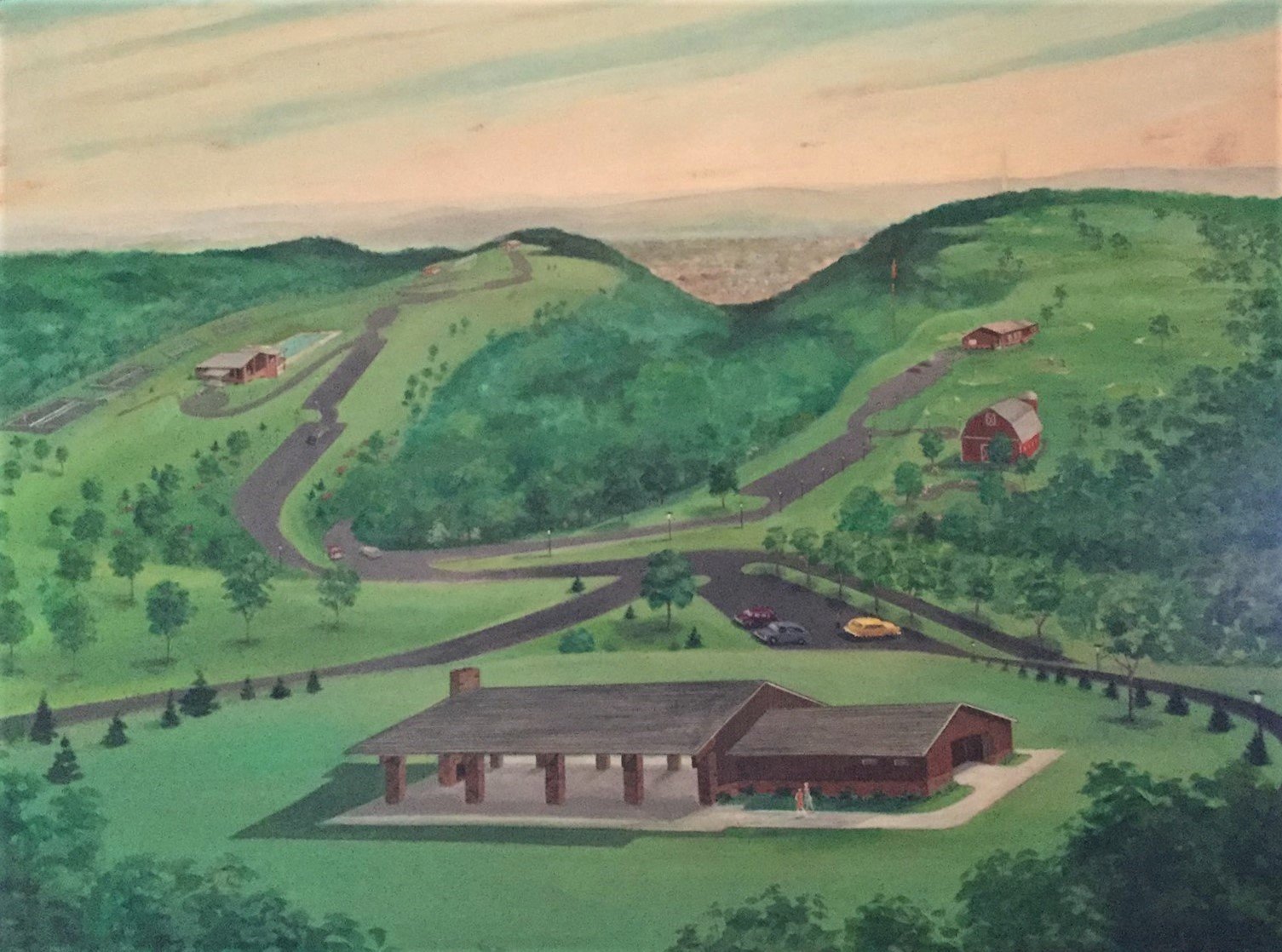 The water slide of the 1980s. (Photo courtesy of Grand Vue Park) 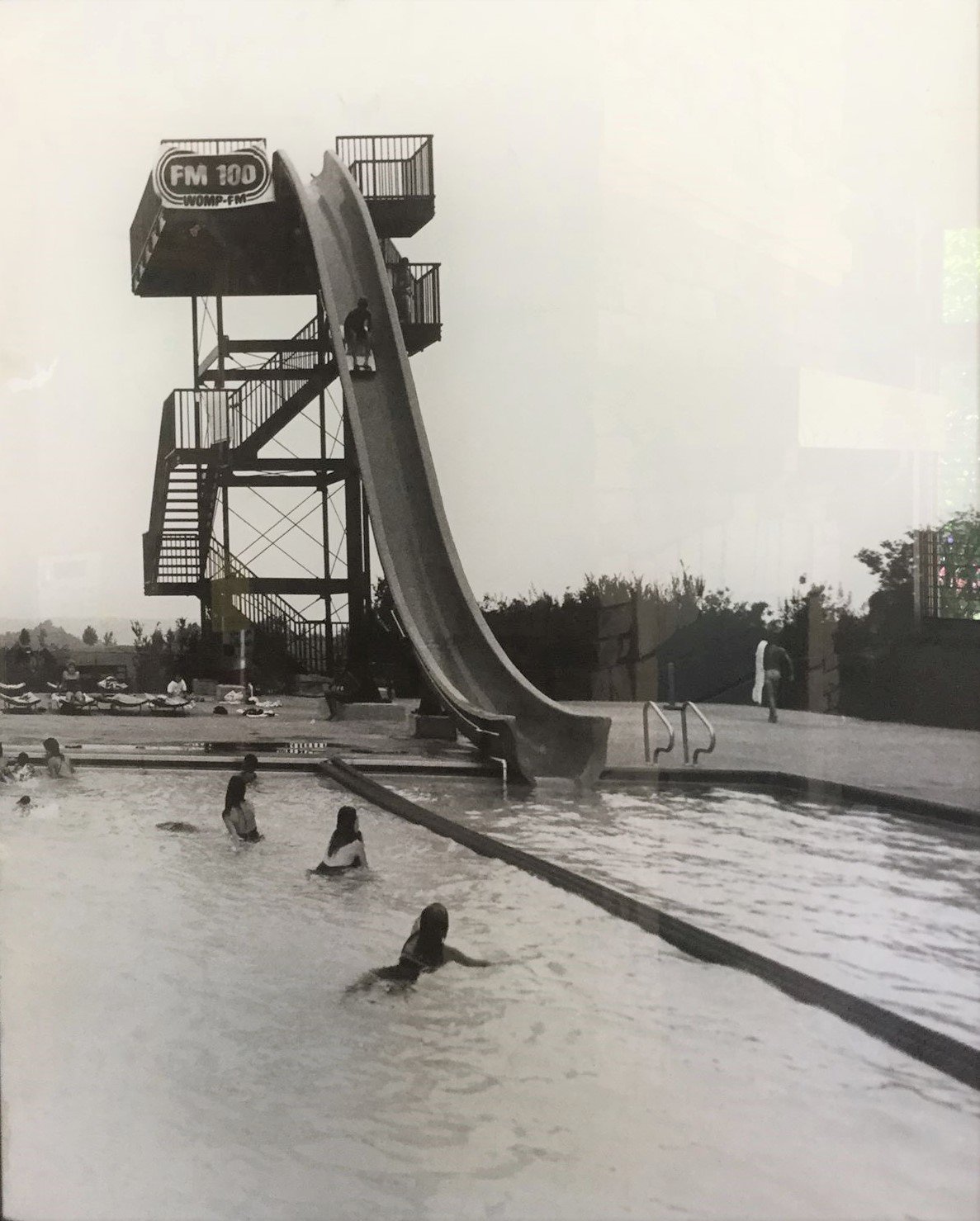 Snowflake and Flurry. Grand Vue Park's albino deer that resided in the park from during the 2010s. (Photo courtesy of Rick Vargo) 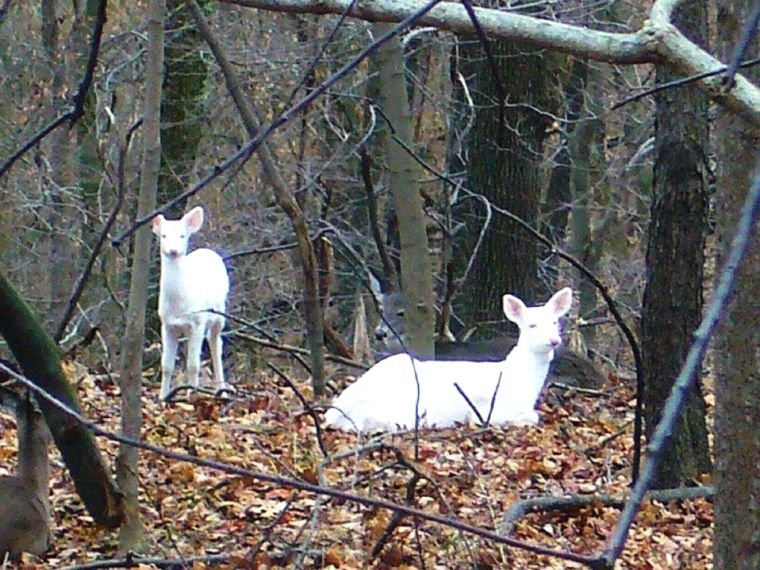 Several people were buried on the grounds of the one-time poor farm and sanitarium. This marker next to the white fenced off area is dedicated to their memory. (Photo courtesy of Susan Jones) 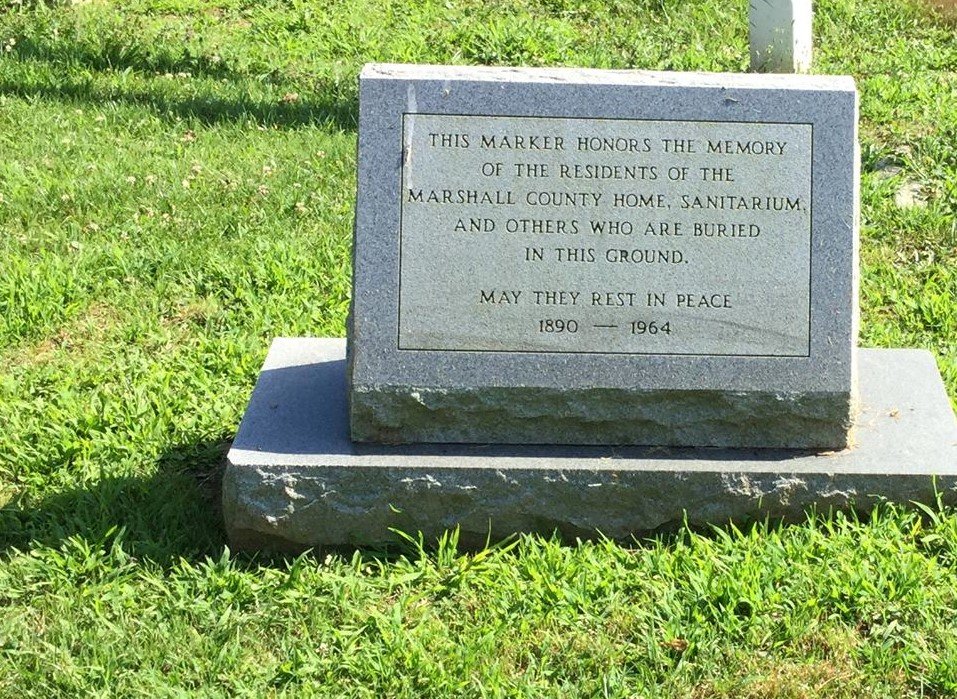 Before the U.S. welfare safety nets were put into place, local counties and townships across the country had to provide their own safety nets. "Poorhouse," as a term, is not well-known in the 21st century but it wasn't that long ago that you might hear someone say "You're going to run me to the poorhouse" when their fortunes were taking a turn for the worse or their finances were dwindling.

In an article written by Tracey Tyler, the poorhouse is explained in this way:

These "houses of industry and refuge," as they came to be known, were shelters of last resort for the destitute, homeless, "feeble-minded" and elderly. In exchange for their labour, they were provided with spartan accommodation, clothes and simple food, much of it grown themselves.

The need for such places basically disappeared once Social Security was in place. By the 1950s, "poorhouses" had become a thing of the past.

In Marshall County, the poorhouse and farm was located right on the bend of the road where present-day Grand Vue Park is situated. The iconic red barn is the only building remaining from the poor farm which closed in 1962. The farm covered the present-day golf course and continued over the hill, bordering the Cockayne farm in Glen Dale. The county-owned house had 4 rooms upstairs and 4 rooms downstairs. An average of 20 men and half a dozen women lived there. A county hospital was next to the house and generally held less then ten people. A county children's home was across the road where the present-day deluxe cabins are located and the county dog pound was located on the poor farm property.

Some of the residents were good with the animals and some worked the garden. Others helped with the housework. When they died, many were buried at the county-owned cemetery just beyond the barn by the present-day golf course. The farm kept dairy cows and the milk went to the house, hospital, and children's home. If there was extra, it went to the county jail. There was also hay to bale. The water for the county properties was dependent on a pump located down the hill toward Moundsville that needed to run a few hours each day to fill the reservoir.

The last family to serve as caretakers was the James and Eva Parsons family. They took over the farm in 1951 and stayed until it closed in 1962. Once the poor farm was shut down, the prisoners from the Moundsville Penitentiary continued to bale the hay.

In 1968, the county commission made the decision to use the property for a county park. It took 6 years to prepare the land, and Grand Vue Park opened in 1974 on 125 acres of land offering two shelters with electric, full kitchens and restrooms; non-shelter picnic areas; a heated outdoor pool and club room; tennis courts; 18-hole Par 3 golf course; and, barn with playground. Within 5 years, the County Commission had purchased the nearby Carter Darwish farm (the area of the present-day banquet hall and trails) and the Clarence Sibert farm, where the present-day traditional cabins are located. The park increased to 550 acres and a miniature golf course, driving range, outdoor amphitheater, additional shelters and four winterized cabins were added. In the 1980s, a large water slide was added to the pool and bumper boats were added to the area next to the barn. Neither of these attractions survived the passage of time.

In the 2010s, Grand Vue was the site of three albino deer. One of them, Flurry, lived in the park for 2-3 years and became a local celebrity. The ice cream shop at the park (located in the barn) is named in her memory.

Under current park director Craig White, there has been additional lodging and many activities added that include disc golf, zip lining and an aerial adventure park with more plans in the making.