Wooden Alley is a historic wood block paved alley spanning 530 feet that connects Astor Street to State Street in Chicago's Near North Side neighborhood. Thee wood block technique is a derivative of Nicholson paving, which was developed in Boston and admired by Chicago city planners as a good way to pave Chicago's still-swampy lands during the 19th century, notably because of Chicago's growing lumber industry. First paved in 1909 (restored in 2011), the alley is one of only two remaining wooden alleys in Chicago. 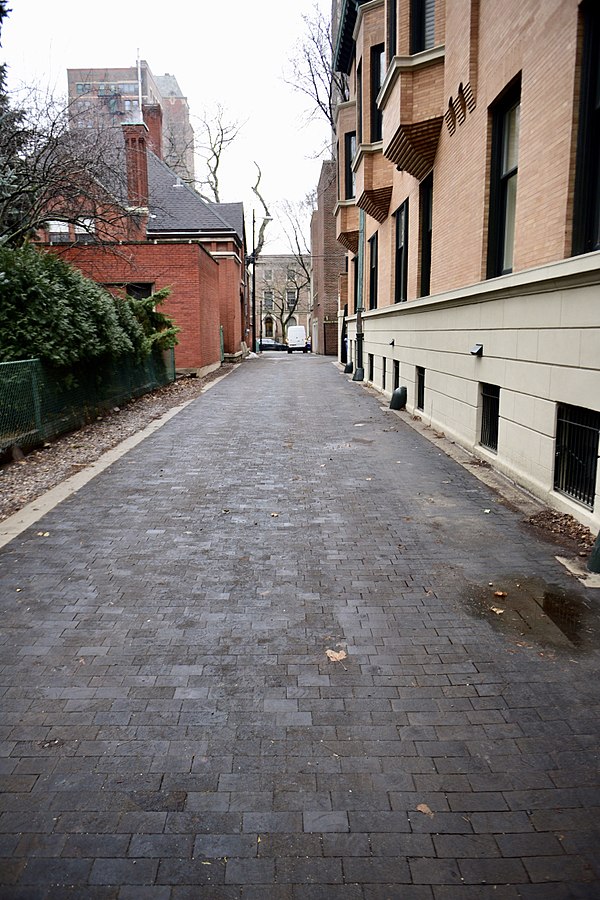 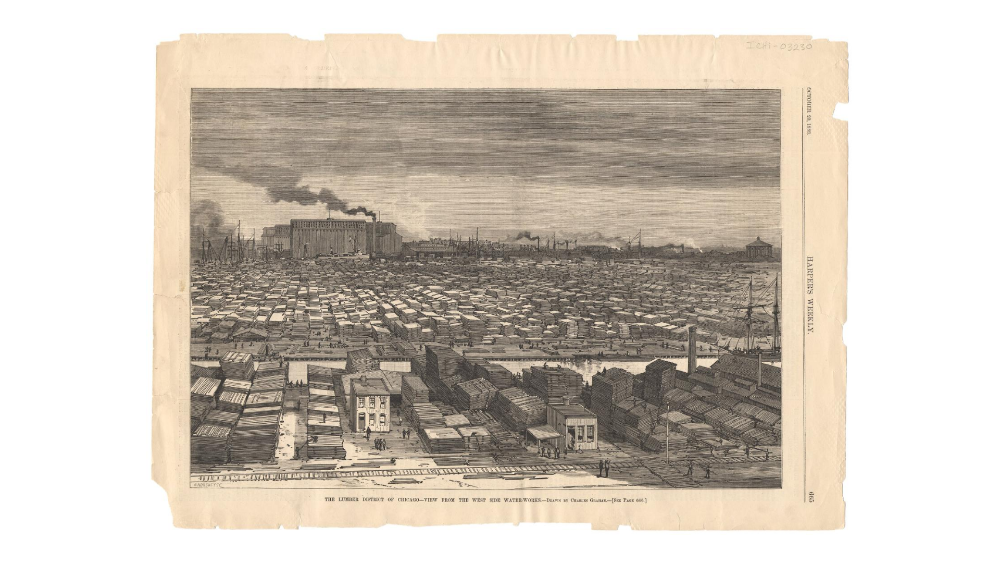 The wooden alley, built in 1909 and is currently located at 1535 North between Astor and State Streets, represents a period of Chicago when it transitioned quickly from a swampy town to burgeoning metropolis -- one with a flourishing lumber industry, all within the era of growing industrialization and a subsequent need for quality roads.  The alley embodies the engineering significance of wooden paving as it relates to urban planning and transportation during the last half of the 19th century.
As Chicago rapidly grew, urban planners struggled to find a solution to its needs for a quality road network that supported its ever-increasing heavy traffic. Though wooden street paving dates back to 1849, early uses of comprised of using wooden planks, but planked streets frequently needed repairs or complete overhauls. As a result, Chicago became the first western city to adopt the "Nicholson paving" technique, developed in Boston by Samuel Nicholson in 1848, which proved to be both affordable and durable.
Nicholson paving involved placing one-inch thick plank "flooring," which was treated with hot tar. Six-inch-tall blocks were then laid on the roadbed with the rows of six-inch blocks separated three inch-high and one-inch wide spacers or "pickets." Builders then filled the spaces between blocks with tar and gravel or cinders and then mashed down.
Many cities adopted the Nicholson Paving technique, but in 1867 the American Nicholson Pavement Company obtained an injunction preventing cities from continued use of the process because the American Pavement Company owned its rights. Thus, Chicago and other cities turned to similar wooden-block construction such as Boyinton Paving.
The 1871 Chicago Fire burned thirty-seven of the city's sixty-one miles of wooden roads, but that did not deter the city from developing wood-block streets. Indeed, wood-block roads made up 73% of the new streets paved in 1881, and that number barely dipped to 62% in 1891.  In fact, by the turn of the century, despite well-researched arguments that demonstrated how wooden streets were less durable and carried more disease than stone, Chicago maintained its love for wooden block roads for several decades, mostly because wood proved far more inexpensive than stone.
In part, Chicago's flourishing lumbar market helped make wood roads and alleys more feasible than stone and granite, even into the 20th century. The lumber market arose in Chicago during the late 1830s Chicago with the first shipment arriving via Lake Michigan from Michigan, an example of how Chicago's urban development, as well as the entire region, allowed humans to exploit the natural resources of the area for economic advantage -- both personally and for a community.  As well, the move towards developing cities notes the increased trend of transporting resources from its natural location to one used for human needs, such as transportation and fuel. All told, the abundance of pine forests in Wisconsin, Michigan, and the easy transportation provided for by Lake Michigan, and its ample connecting rivers helped turn Chicago into the nation's largest lumber market, easily surpassing older, Eastern U.S. markets.
In short, the alley, though reasonably small in size, stands as a monument to Chicago's massive urban growth and its tie to lumber. By 1879, Chicago produced five billion feet of lumber, shipping millions of feet each year to parts of the nation. In lumber each year. By 1889, that number rose to seven billion feet.  Not only did that lumber get shipped, but it also helped build Chicago -- the fastest growing city in history with 300,000 people in 1870 increasing to 2.1 million by 1910.  As the city grew, the need for lumber grew, and as the lumber industry grew, it helped Chicago grow.  Hence, there was not much push to move away from a love affair with wooden block roads.
The approach of World War I finally saw a rapid decline in Chicago's lumber market domination. That, along with a host of other variables, finally made wooden roads less feasible. Thus, the historic wooden alley built in 1909 also represents the tail-end of Chicago's lumber dominance. In fact, by 1900 only 15% of the city's paving involved wood blocks and by 1905 the only roads using wood were alleys. Thus, to view the historic wooden alley between Astor and State Streets is to see an excellent example of Nicholsonesque wooden pavement. As well, observing the street also allows one to peer into a time when Chicago experienced dramatic growth, much of it tied to lumber, and needing better roads to handle the flow of traffic (read: transporting goods).

Lumber District: Harper's Weekly, 1886. Now held by the Chicago Historical Foundation and found digitally at the Encyclopedia of Chicago via the Newberry Library at http://www.encyclopedia.chicagohistory.org/pages/3030.html.