In the historic town of Berkeley Springs, West Virginia, once known as the Town of Bath, lies a museum, a bathtub, and a very old swimming pool. Berkeley Springs gets it's name from the bubbling springs underneath the town. They stay at a constant 74 degrees year round and are known for being healing. Far before white settlers came to the little town, Native Americans had frequented the springs because of their great healing powers and year-round warmth. The town was first noted as Medicine Springs in 1747 on a map drawn by Thomas Jefferson's father. The Museum of the Berkeley Springs is located on the second floor of the Roman Bath house that resides in Berkeley Springs State Park, built in 1815- it is the oldest public building in the park. The museum was established in 1984 and exhibits include the Geology of Berkeley Springs which has some of the beautiful crystals found within the area, the Native American exhibit which displays tools, arrowheads, and different maps of the area. The museum also has many documents belonging to James Rumsey, the steamboat inventor. The museum's greatest exhibits are those of the history of the beautiful Town of Bath. It has original documents from the formation of the town, old pictures of the town from long ago, a section of historic swimsuits and other oddities related to the springs. The one thing that always interests outsiders about Berkeley Springs is their bathtub. This particular, and very small, bathtub resides in the park outdoors, it sits next to a stone wall that borders the park and the springs, and is nestled into the ground. It is only famous because George Washington made it so. At 16 years old in 1748, George Washington was surveying land for Lord Thomas Fairfax when he discovered the healing springs. Washington later returned with his half-brother Lawrence who was ill, in hopes of curing him. It is said that both Thomas Fairfax, who eventually built a private bath in the town, making it a popular spot for the elite, and George Washington himself actually used the small bathtub in the ground. It was the discovery of Washington's mentions of it in different letters that finally gave it the name of George Washington's bathtub in 1903. Washington and Fairfax brought and welcomed soldiers to the town in hopes of giving them healing that they could not find anywhere else. Today the pool that resides in the center of the Berkeley Springs State Park is one of the busiest parts of the town in the summer. The pool is believed to be the same Ladies' Bath House that was mentioned in 1816. In 1851 it was described as having 9 different bathing chambers. Finally in 1854 it was described as having two large buildings, one designated for women with the 9 individual baths, and a community one just for women. Another building being for men's swimming baths. In 1887 park superintendent Henry Harrison Hunter demolished both buildings and replaced it with one 150 foot long structure that he designed and built. It was divided into two separate pools, one for each gender. However, by 1921 the genders bathed together. The victorian pool building was demolished in 1948, but the pool remains. It is now filled with the spring water and is chemically treated. 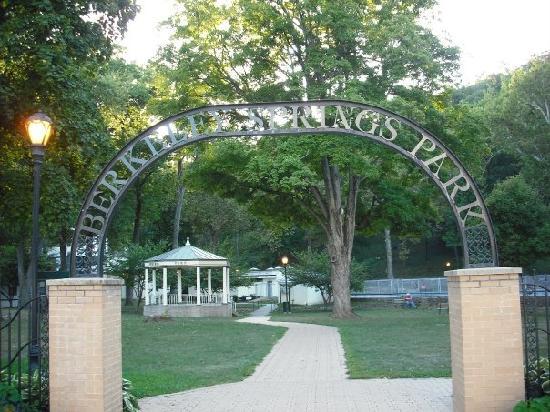 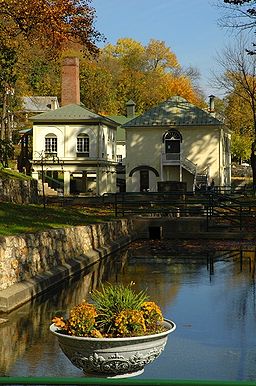