This monument dedicated in 1998 commemorates the military service of Japanese Americans in Hawaii who served during World War II. The monument is historically significant given the important contribution of people of Japanese descent despite the opposition they faced from many Americans after Pearl Harbor. The monument pays tribute to the veterans from Hawaii who despite the prejudice they faced decided to serve the United States and was inspired by a series of oral history interviews of veterans of Japanese descent. Japanese Americans served in four highly decorated military units that are represented in the design of the marker. These units included the 100th Infantry Battalion, 442nd Regimental Combat Team, Military Intelligence Service and 1399th Engineer Construction Battalion.

This piece of the memorial depicts the four unit symbols that represent the units that are honored. 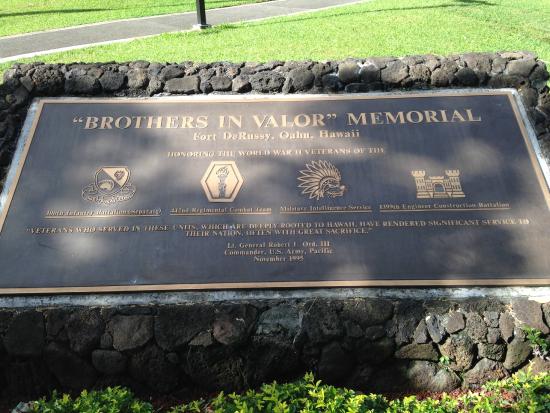 The memorial offers a tribute to the soldiers of each of the four units, one on each side, and describes some of their accomplishments and relevance to the memorial.

This plaque commemorates Judy M. Weightman whose work made this memorial possible. 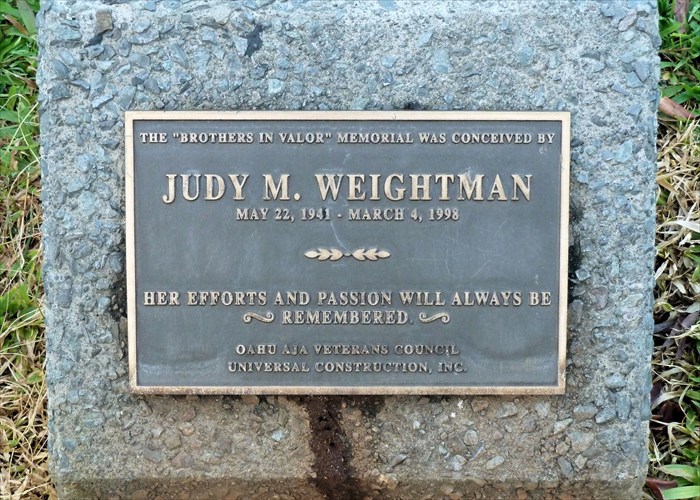 The Brothers of Valor Memorial was first proposed by city council member Judy M. Weightman, who also served on the Oahu AJA Veterans' Council. Motivated by the stories of Japanese-American soldiers she interviewed, including some who had liberated the Dachau concentration camp, she developed the idea of creating the memorial. More than $305,000 of the funds requested by City Council were appropriated for the monument with another $200,000 raised by AJA veterans.

The sculpture was designed and constructed by Bumpei Akaji (1921-2002), a native of Kauai who served in the 100th Battalion of the famous 442nd Regimental Combat Team in WWII, one of the four units recognized at this memorial. Akaji spent time in Italy during the war and later studied at the Florence Academy of Fine Arts and Academia de Belle Arti, Brera in Milan on a Fulbright Scholarship. He was the first to receive a Master of Fine Arts from the University of Hawaii in sculpture in 1951 and is best known for his large copper and brass welded sculptures, which have been displayed in many public spaces throughout the state. Many of his works were commissioned by the state as part of Hawaii's Art in Public Places program, which designates 1% of construction funds in new public buildings to acquiring art.

The memorial is situated on a 5,100 square foot site on Ft. DeRussy, was dedicated on July 4, 1998. The bronze sculpture consists of four metal prongs reaching skyward, intertwined at the base, each about ten feet tall, (pictured). The base is polished black marble about six-feet tall, and on each of four faces is a bronze plaque with the history of each group honored. The monument is centered in a circle of paving stones and at the outer edge of each quadrant are individual bronze plaques mounted on granite stones identifying each of the four groups.

The monument includes a time capsule with scrolls containing the names of those killed in action, all members of the groups honored, and the names of the donors to the creation of the memorial. Local residents say it is well worth one’s time to stop by to read each unit's dedication plaque and learn about how these men became called “Brothers in Valor”.

The four honored units this sculpture represents hold an enormous amount of history. The 100th Infantry Battalion, also known as the “Purple Heart Battalion” guarded Hawaii after the Pearl Harbor attack on December 7, 1941. Led by its battle cry “Go For Broke,” the 442nd Regimental Combat Team earned the honored distinction of being recognized as “the most decorated unit of its size and time of battle in United States military history.” Little is known of the invaluable services of the Military Intelligence Service unit also called “Nisei,” because they worked in strict confidentiality. They were America’s “secret weapon” in the war against Japan. The 1399th Engineer Construction Battalion, with the exception of its officers, was an all Japanese-American military unit stationed in Hawaii during World War II and the only one of its kind to serve in the Pacific War against Japan.