Established in the 1646 and active until around 1670, the Saugus Iron Works was the first North American iron and steelworks. The site today is a reconstruction of the original works, with restoration beginning in 1916 and archaeological excavations beginning in the 1940s. The site was opened to the public in 1954 and became part of the National Park Service in the 1960s. Today, the Saugus Iron Works consists of features including a visitor's center with tours; a museum focused on archaeology, ecology and industrial development, and the history of the area's Native Americans and the Massachusetts Bay Colony; the Iron Works House; the blast furnace with its original 17th century water wheel; the forge, with an original anvil base and hammer; a 17th-century herb garden; the rolling and slitting mill; a Blacksmith shop with live demonstrations; a warehouse and dock; and a nature trail along the Saugus River. 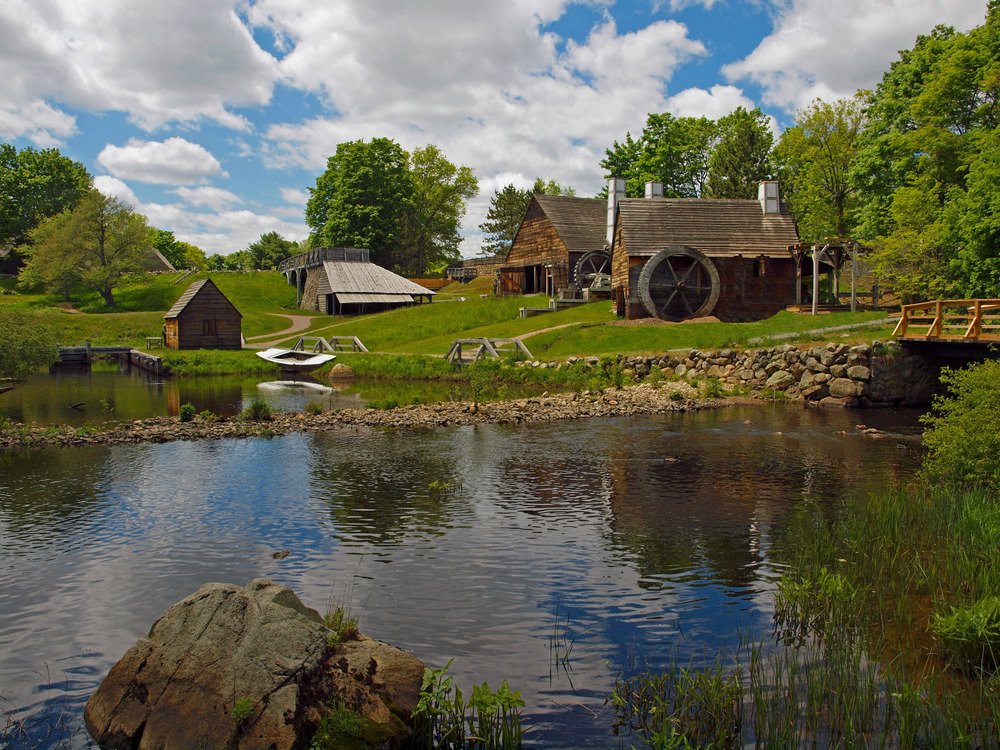 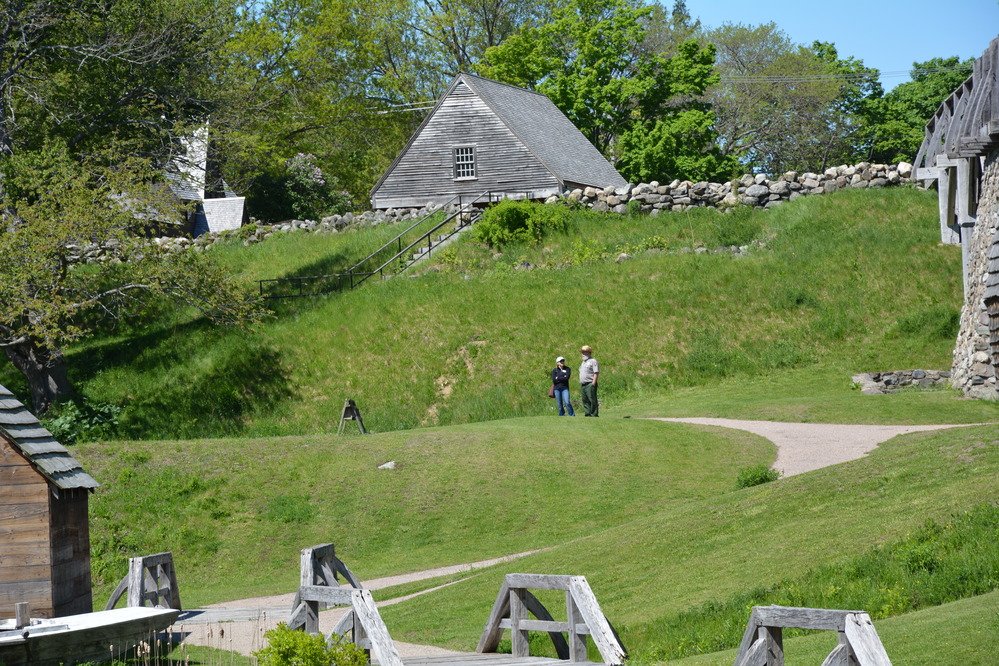 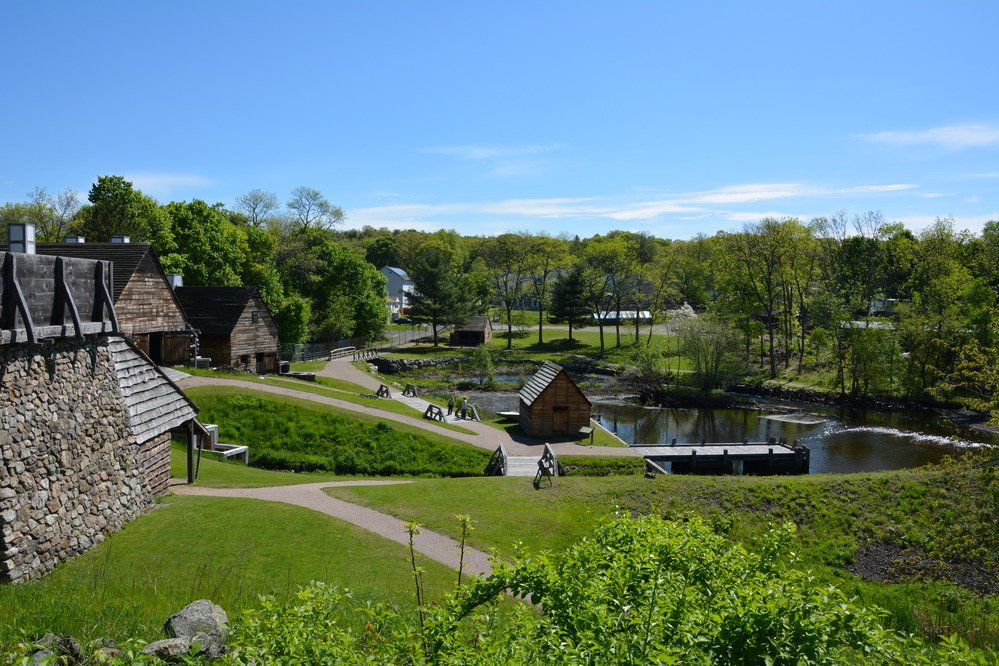 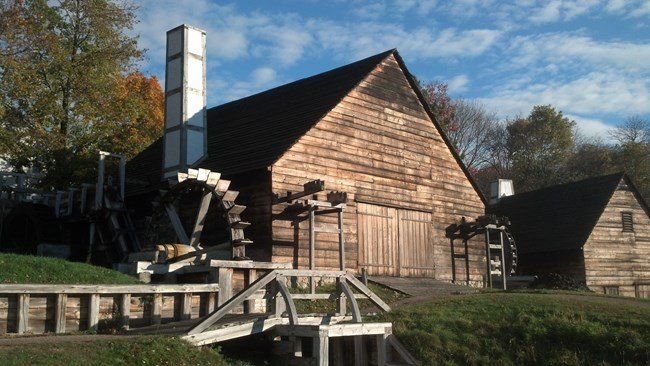 Blacksmith demonstration at Saugus (image from the National Park Service) 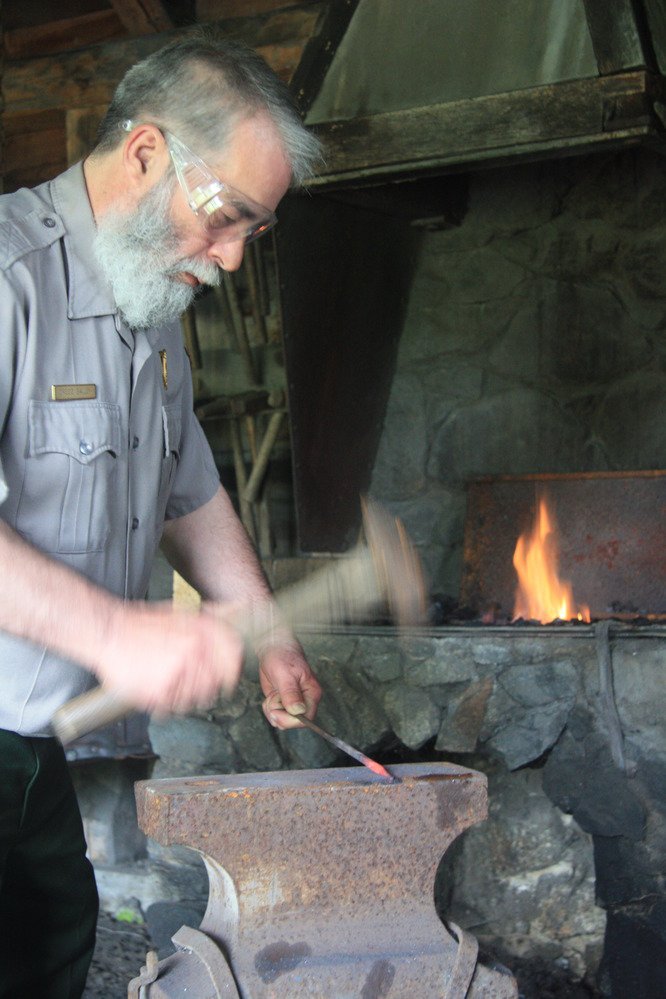 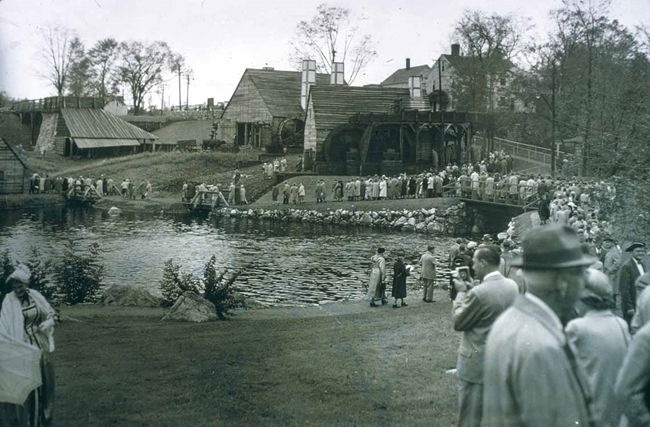 A Brief History of the Site
The region in which modern-day Saugus lies was occupied before European settlement by the Pawtucket people. By the time the iron works was established, the Pawtucket had suffered heavy losses from the introduction of European diseases and inter-tribal conflicts, and many assimilated into Colonial culture as their communities broke up due to European disruptions to Pawtucket populations, crops, hunting, and fishing. The community in the vicinity of the iron works was led, at the time, by a woman known as Great Squaw Sachem, one of at least five women leaders in the Pawtucket territory. Before her death, she had sold all her people's land but a small parcel near the Mystic Lakes, which went to a Puritan upon her passing. The Saugus Iron Works employed at least two Pawtucket men, called Thomas and Anthony, as woodcutters.
As for the settlers, the Puritans established the Massachusetts Bay Colony under Governor John Winthrop in 1630. The colony allowed only male members of the Puritan Church to vote or own land, and was run on strict religious laws. Women could not participate in government, but were allowed to work as schoolteachers, midwives, and "physicars" (essentially nurses). Men worked primarily as farmers, tradesmen, or merchants. The Governor's son, John Winthrop the Younger, promoted the establishment of the iron works for the Massachusetts Bay Colony, which was co-owned by several wealthy Puritans and worked part-time by farmers for extra money. Skilled iron workers were brought from England. As these workers were non-Puritan, they were excluded from land ownership or participation in government; conflicts naturally arose regarding religion, law, and behavior within the community. Captive Scottish soldiers defeated in the Battle of Dunbar in 1650, were imprisoned or exiled to the Massachusetts Bay Colony. Some of the latter were sold as indentured servants to the iron works as woodcutters, colliers, and laborers and placed in company housing. Though utilized as unskilled laborers, some learned trades such as Blacksmithing and carpentry from other workers during their indenture. As these skilled workers and their families spread out to other parts of Colonial America, they established new centers for industry and technology, creating new jobs and opportunities in the New World.
The property encompassed by the Iron Works today also includes a separate Blacksmith's shop owned by an individual, Joseph Jenks, established in 1646. Jenks registered the first machine patent in Colonial America.

The oldest remaining building from the original Saugus Iron Works, the Iron Works House (built circa 1680) was purchased in 1915 by photographer Wallace Nutting, who restored the building at the urging of William Sumner Appleton. Appleton founded the organization which became Historic New England, and had a family connection to the Iron Works. Local residents, particularly women (including the local chapter of the Daughters of the American Revolution), advocated for historic preservation of the site, and formed the First Iron Works Association to organize their efforts. After fundraising efforts led, in part, by Louise Hawkes, the Town of Saugus purchased the property in 1944. Archaeological excavations funded by the American Iron and Steel Institute during the 1940s-50s, under the supervision of Roland W. Robbins. Archaeological findings were incorporated into the reconstruction process, and artifacts displayed in the museum. Opened to the public in the early 1950s, the site was added to the National Parks System in 1968.

Today, the Saugus Iron Works consists of features including a visitor's center with tours; a museum focused on archaeology, ecology and industrial development, and the history of the area's Native Americans and the Massachusetts Bay Colony; the Iron Works House, which can be toured; the blast furnace with its original 17th century water wheel; the forge, with an original anvil base and hammer; a 17th-century herb garden; the rolling and slitting mill; a Blacksmith shop with live demonstrations; a warehouse and dock; and a nature trail along the Saugus River. The park around the site contains more than 200 plant species and 74 bird, 11 mammal, 4 reptile and amphibian, and 11 fish species.