This historic campus building was completed in 1937 with the support of the Public Works Administration and became the first dormitory for men at West Liberty State Teachers College. Following the completion of this structure, the state of West Virginia invested funds to create additional academic buildings, a new library, and new programs. With more students taking classes leading to degrees in the liberal arts, the former normal school was renamed West Liberty State College in 1943. This campus building was named in honor of Reverend Nathan Shotwell. In 1838, Shotwell became the first teacher of the private subscription school that grew into one of West Virginia's state-funded universities. The building was known as Fraternity Hall for most of the 20th century owing to its status as a dormitory for men until 1964. The Colonial Revival structure now serves as the home for many faculty offices.

Main Hall was constructed in 1926. 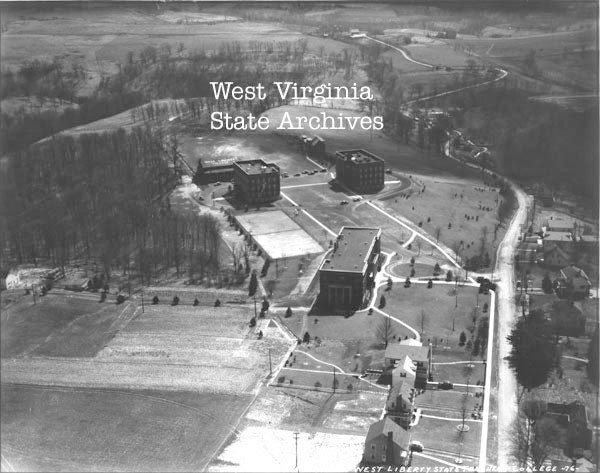 A postcard from the 1930s showing Shaw Hall (right) and the President's Mansion (center). 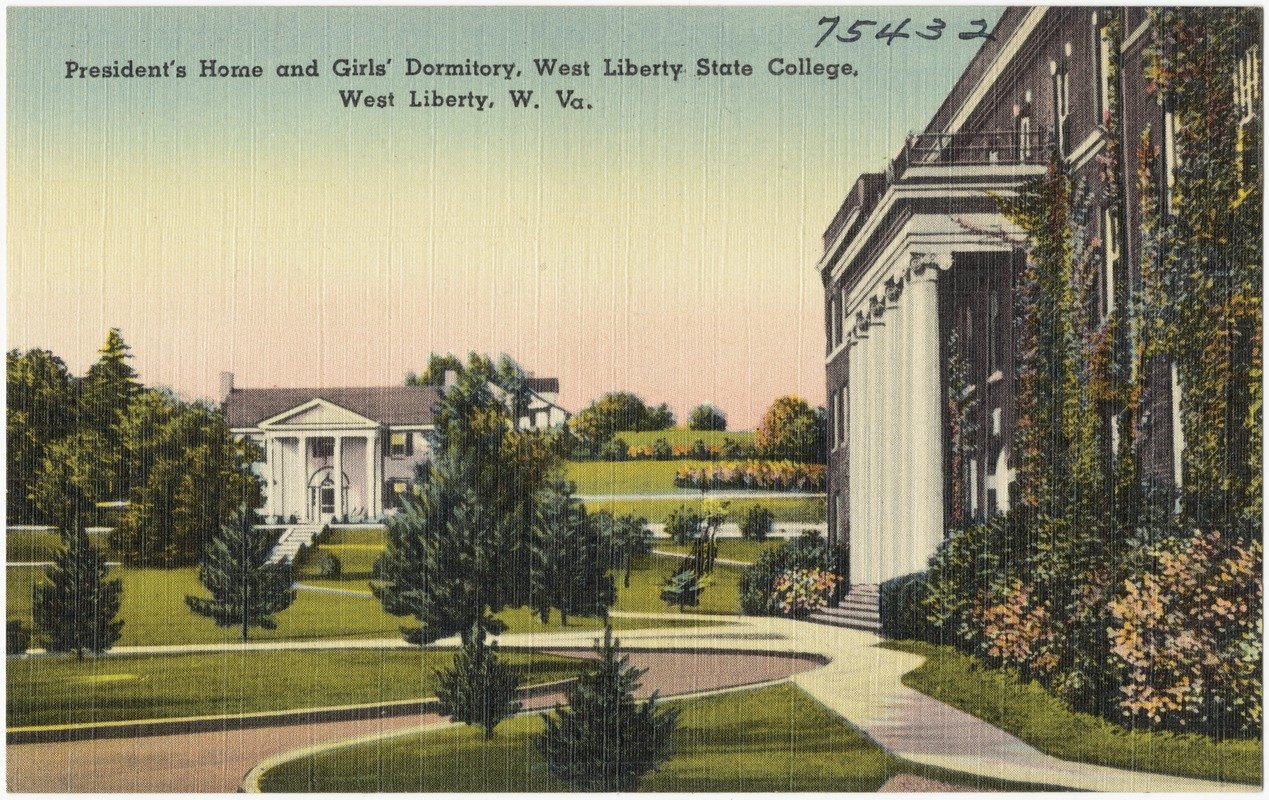 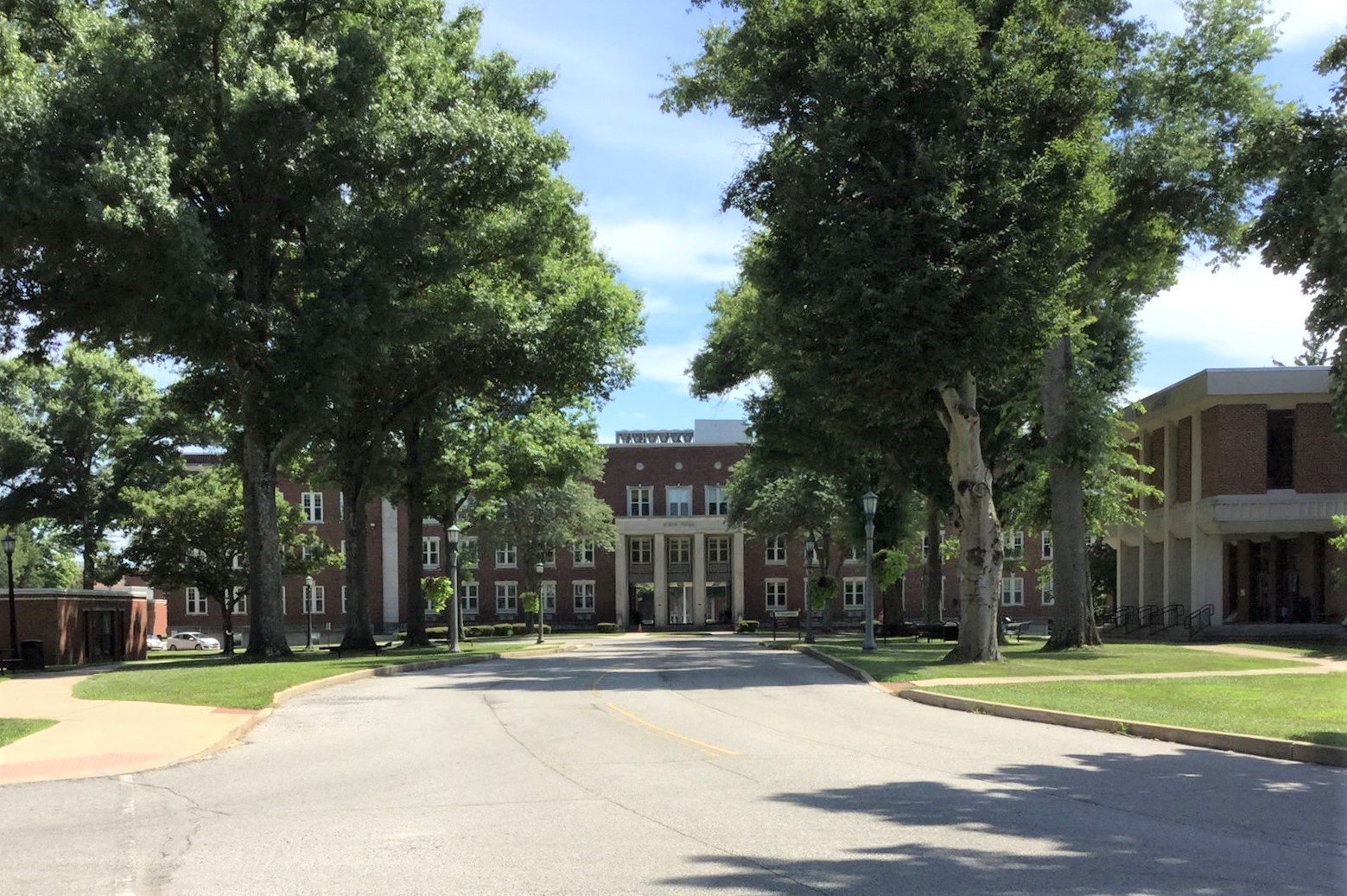 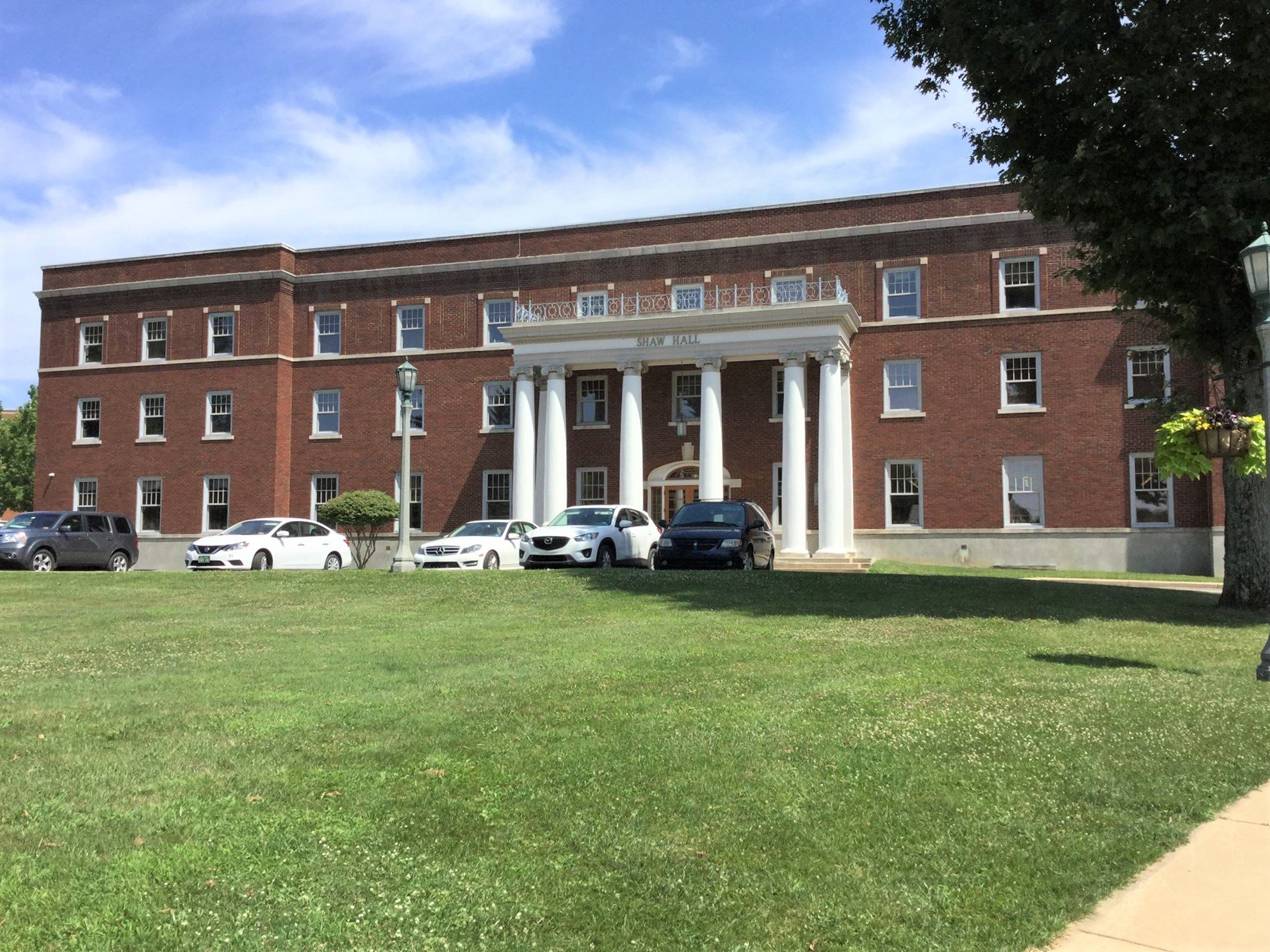 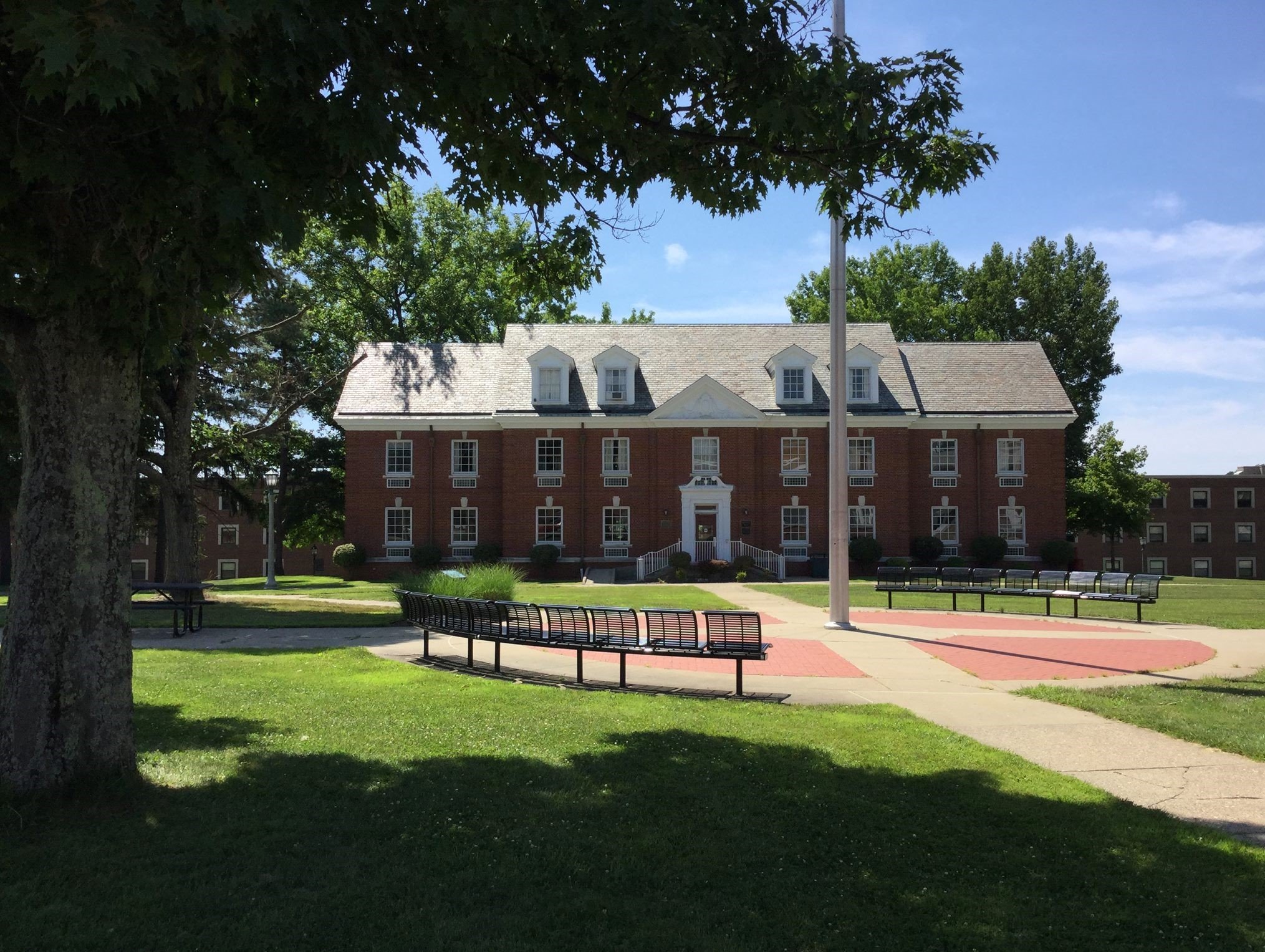 View of the Hall of Fine Arts across the "Quad" from Main Hall. (Photo courtesy of Susan Jones) 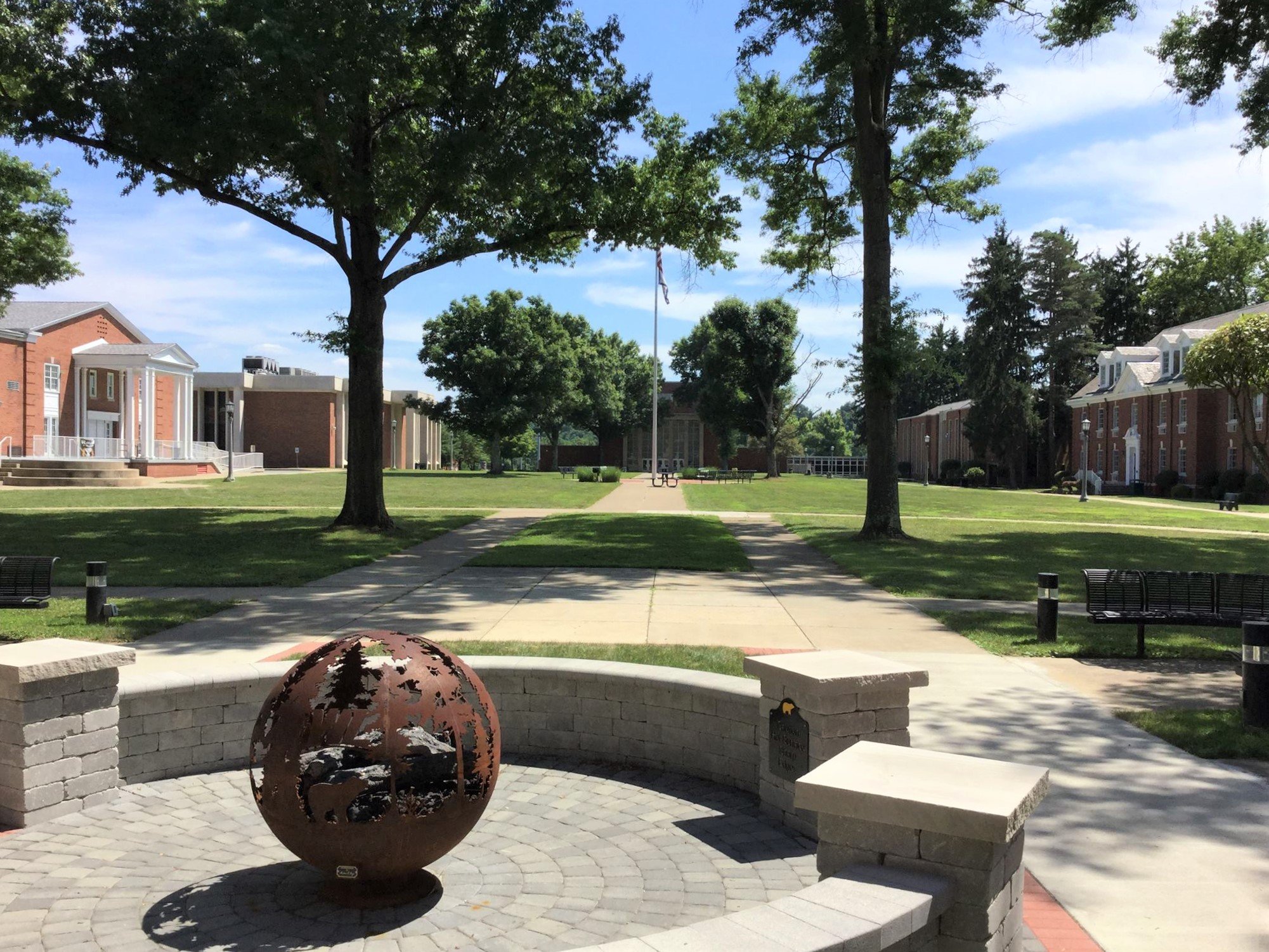 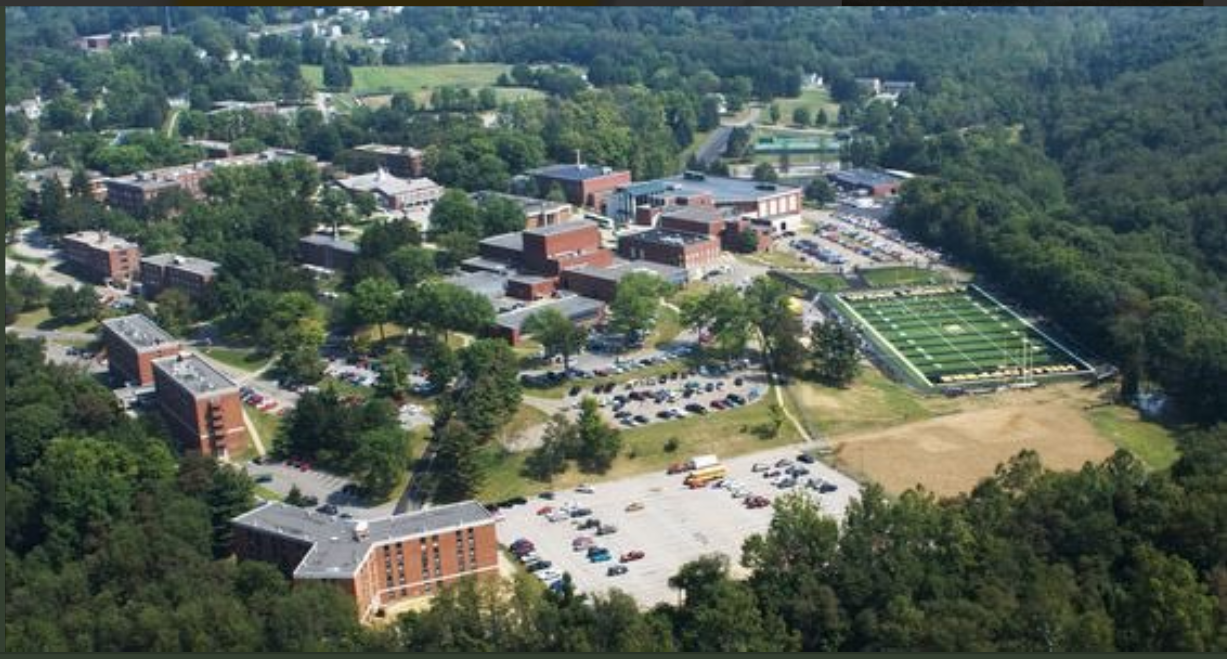 The town of West Liberty was established in the early years of the American Revolution and served as the county seat for Ohio County, Virginia from 1777-1797. The town was given the name "West Liberty" due to its position as one of the western-most settlements of the thirteen colonies declaring independence from England. West Liberty remained the county seat until 1797 when the county seat was moved to Wheeling.

The first academy of higher education in this part of what would become West Virginia was established by a charter from the Virginia legislature on March 30, 1837. This private subscription school met in Shotwell's West Liberty home the following year. While most subscription schools were short-lived, this school evolved and grew in the subsequent decades. Classes were held in private homes and rented spaces until the construction of Academy Hall in 1857, a building that remained standing until the 1970s. The academy was nearly closed or relocated on several occasions, but it survived largely owing to its reputation for training teachers and became an official state normal school before becoming a state college. In 2009, West Liberty was granted university status and today it offers more than 70 programs of study for a student body that fluctuates between two thousand and twenty-five hundred full-time students.

In an 1859 school catalog there was allowance for both male and female students although the coursework was based on gender with boys studying Latin, Greek and philosophy and girls studying literature, writing and geography. Both groups worshiped together on the Sabbath. Housing was done privately in the town. The first dormitories were not built until the 1920s.

Following the American Civil War the school became a Normal school, focusing on preparing teachers for the greater demand for education. The current campus was developed during the 1920s on farmland that was just south of the Academy Hall building. Main Hall was the central building. In 1931, the school changed its name to West Liberty State Teachers College. In 1938 a branch campus opened in Wheeling. It would later become known as West Virginia Northern Community College.

During WWII the hilltop campus became known as West Liberty State College and saw its highest enrollment due to the GI Bill. Many additional academic buildings and dormitories were added to the campus during the 1960s to accommodate the baby-boom generation.

In recent years, the campus has seen numerous new buildings including dormitories, laboratories, and athletic facilities. The campus includes nine academic buildings, seven residential buildings, two cafeterias, and additional office and athletic facilities. The university serves over 2300 students from 27 different states and 23 countries from around the world. West Liberty also opened a secondary campus in Triadelphia at The Highlands.

West Liberty's Shotwell Hall and Shaw Hall are both listed in the National Register of Historic Places. Shaw Hall was built in 1919 and served as a women's dorm. The Neoclassical designed building was the first building on campus and the only dormitory on campus until Shotwell Hall was added as a men's dormitory in 1937. Shotwell Hall was designed by noted Wheeling architect Frederick F. Ferris. The design was Colonial Revival and was built during the Great Depression as part of a PWA project. It was named for the college's founding father, Rev. Nathan Shotwell.

In 2018, West Liberty University ranked #37 in the Top 50 regional colleges in the South. Furthermore, it was ranked the highest public university in the state of West Virginia.