This building served as the headquarters for Trans World Airlines (TWA) from 1956 until 1964. Once one of the leading airlines in the world, TWA was in business from 1930 to 2001. The company pioneered many aviation achievements such and was known for being the first to utilize the Lockheed Constellation. TWA’s presence in Kansas City up until the late 1960s was a boon for the city’s economic development,as was the company's flight attendant training school that operated in Kansas City from 1969 to 1988. The corporate headquarters building was the first major commercial structure built in the city in decades. It was notable for being constructed with prefabricated concrete and steel. In the early 2000s the building was restored to its original appearance, and today it houses offices for a local advertising company. The building was added to the National Register of Historic Places in 2002.

The TWA building has been restored to its original appearance and today houses an advertising agency. Image obtained from David DeHetre, Wikimedia. 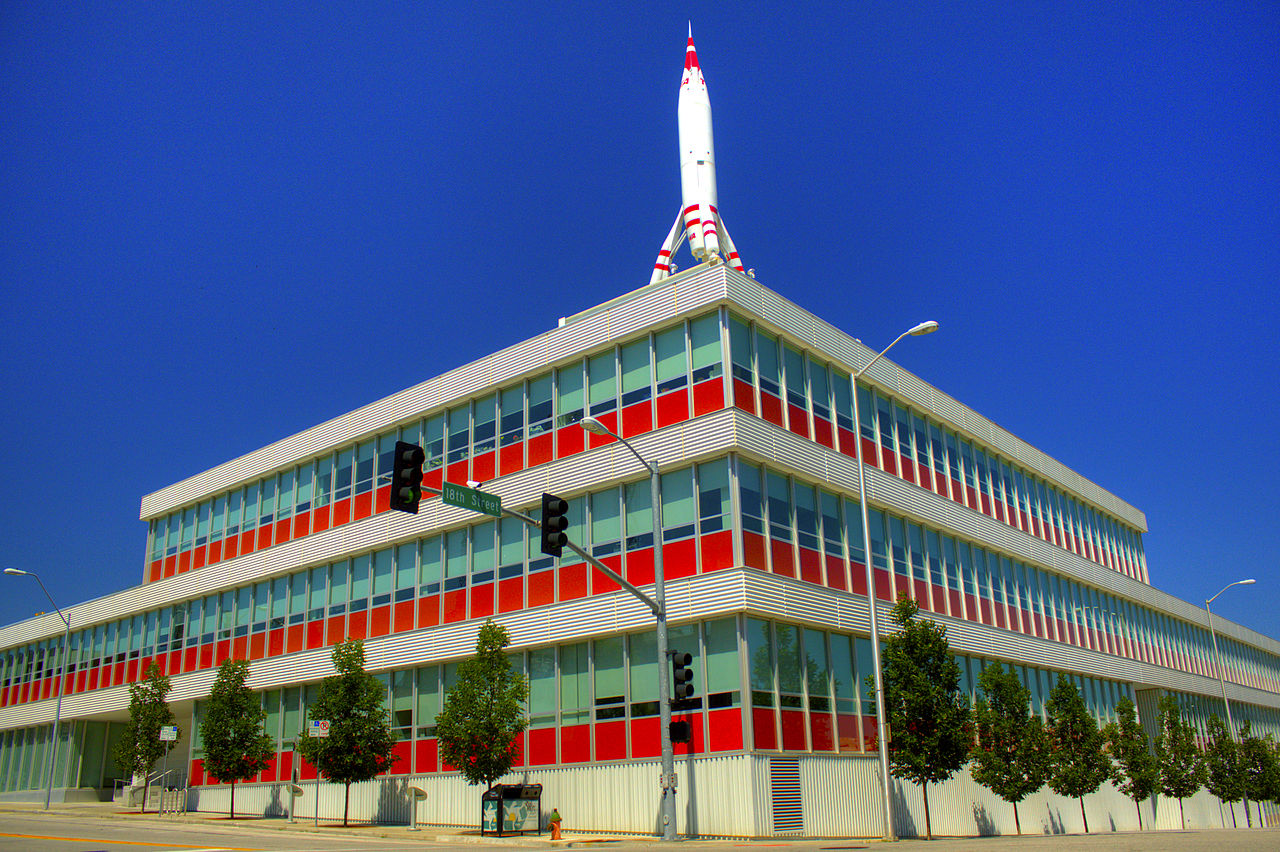 The TWA building shortly after its construction in 1956. Image obtained from Architect Magazine. 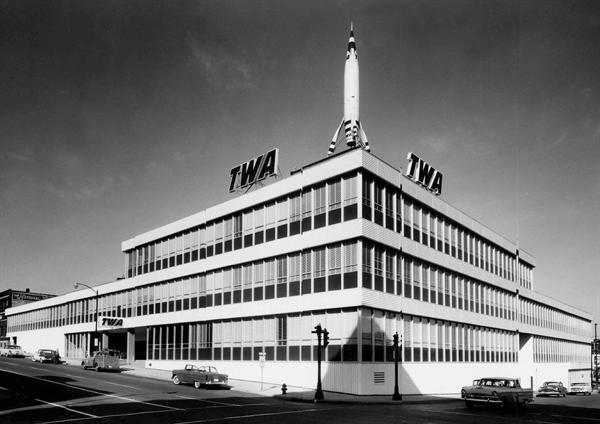 In the 1980s the building's red and white metal paneling was covered with brown stucco. It was later removed during restorations in the early 2000s. Image obtained from Architect Magazine. 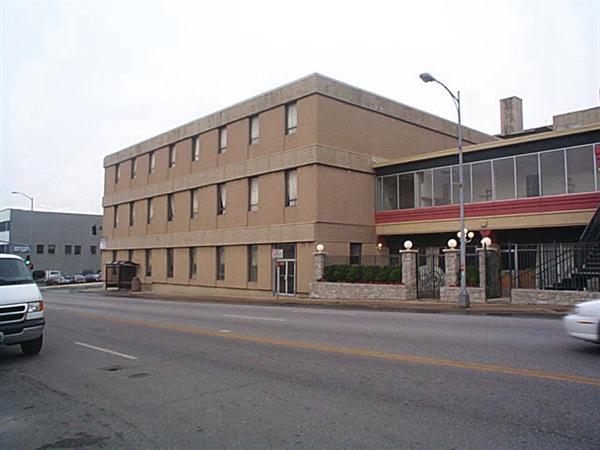 Trans World Airlines (1930-2001) was a popular airline known for its innovations and luxury before financial problems in the 1980s and 1990s forced it into bankruptcy. Image obtained from Fandom. 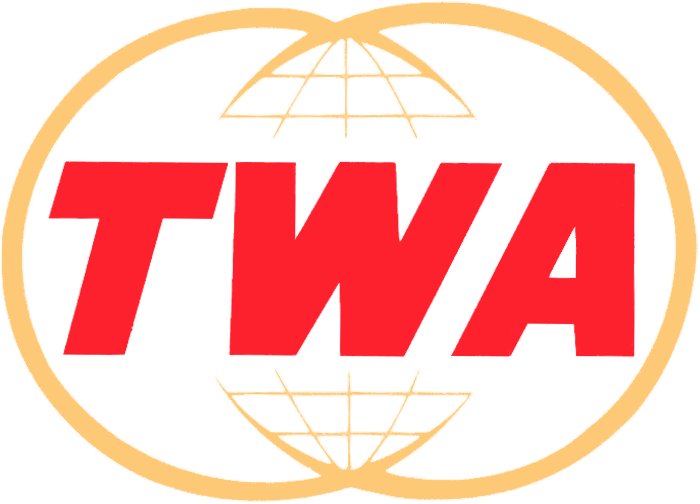 Transcontinental and Western Air was formed in 1930 when two mail carrier airlines, Western Air and Transcontinental Air Transport, merged together and switched their focus to passenger travel. TWA set up its headquarters in Kansas City, supposedly at the recommendation of Charles Lindbergh, who had been associated with Transcontinental Air Transport. In 1939, wealthy aviator Howard Hughes purchased a controlling stake in the company and became its de facto leader. TWA initially prospered under Hughes. It became the first company to use planes with pressurized cabins for domestic service, which dramatically reduced the time of flights. It also commissioned the development of the popular “Connie” Constellation plane from Lockheed Aircraft. As it grew, the company began adding international routes and in 1950 was renamed Trans World Airlines. The company also developed a reputation for luxury and glamour. It flew a number of celebrities, and introduced amenities such as in-flight movies. In 1960 Howard Hughe’s erratic behavior and somewhat-questionable financial decisions caused the company to pressure him into leaving. In 1967 TWA began offering jet service for all of its domestic and international routes, the first airline to do so.

TWA had its first headquarters in the Kansas City Municipal Airport, and additional offices were scattered throughout the city. In 1956 the company decided to consolidate all of its operations into one facility. A new headquarters building was constructed on 18th street at the site of the former Muehlebach Brewery. The 124,000 square foot building was designed in the International Style by architects Raymond Bales Jr. and Morris Schechter at a cost of $1.5 million. It was notably constructed using a process called Youtz-Slick, in which prefabricated slabs of concrete were lifted by hydraulic jacks and attached to the steel beams. The exterior was covered in red and white metal paneling.

Due to its significant growth in the 1960s, TWA made the decision to relocate its headquarters to New York City in 1964. It maintained a number of offices in the Kansas City building until 1969. The corporate headquarters building was actually owned by the Kansas City Life Insurance Company, which leased it out to TWA. Starting in 1975 the building contained offices for the Bureau of Hearings and Appeals Regional Development Center. In 1981 the classic white and red paneling were covered in brown stucco surfacing.

By the 1980s TWA was plagued by a number of financial issues. It now lagged behind in innovation, and was burdened by a large amount of debt. In 1985 the airline was acquired by Carl Icahn. Icahn was reportedly interested only in personal profit for himself, and was accused of mismanaging the company into worse financial problems. TWA struggled to be profitable, and declared bankruptcy twice in the 1990s. Finally in 2001 the company was acquired by American Airlines and ceased to exist.

When TWA went out of business, the Kansas City headquarters building had been vacant for a number of years and was in a state of disrepair. In 2002 it was added to the National Register of Historic Places, and efforts began to restore the building. The El Dorado Architects firm embarked on a $15 million project to refurbish the TWA headquarters into a modern office building. The brown stucco was removed and the original exterior restored, complete with a reproduction of the Moonliner II rocket. One new feature was the addition of a green roof to absorb stormwater runoff. Since 2006 the building has been occupied by Barkley Inc., an advertising agency.

This short walk through the heart of Kansas City's Crossroads District was designed to offer an introduction to both the neighborhood and the larger history of Kansas City. Starting at one of the early 20th century warehouses that now house an art gallery, the tour moves north to include several historic buildings related to Tom Pendergast and the Jazz Age, as well as one of his powerful predecessors who built a streetcar empire. The tour then explores the history of Nelly Don, the most powerful businesswoman in the garment industry before moving on to Kansas City's Automobile Row and several other historic buildings before returning to the starting point with stops at structures that are now home to art galleries. Demonstrating the rise of what was then known as Midtown, the tour then stops at the City Bank Building and the headquarters of the Kansas City Star before winding its way to a former candy factory. After a pause to enjoy a libation at Toms' Town Distillery, the tour continues with a former school that is now home to the Kansas City Symphony. The next stop is a series of representative buildings within the four-block area known as Film Row. Thanks to preservationists, many of the buildings where leading Hollywood Studios maintained offices have been repurposed. After visiting Film Row and the place where Walt Disney once worked, the tour turns south to return near the starting place with stops along the way at the iconic TWA Building, the Columbia Building, and Safeway Stores Office. Be sure to explore individual entries within Clio to discover landmarks and histories within the Crossroads District that were not included on this short tour.