The Delta Kappa Epsilon Fraternity House is a historic chapter house constructed in 1912. The house is representative of the flourishing of the Greek Letter Society movement at the Urbana-Champaign campus of the University of Illinois in the early twentieth century. It was designed in the Tudor Revival style by fraternity member E.G. Oldefest. Although originally constructed as a residence for Delta Kappa Epsilon members, the house has subsequently been home to other fraternities including Alpha Sigma Pi (1921-9), Tau Delta Phi (1929-40), and Chi Phi (1986-present). 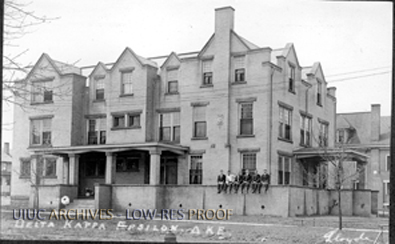 Greek Life at Urbana-Champaign:
The Delta Kappa Epsilon house is one of 77 fraternity and sorority chapter houses located on or around the campus of the University of Illinois at Urbana-Champaign. In the first decades of the twentieth century, university administrators across the country were adopting a more laissez faire attitude towards student life based on the model of the German university. Students were encouraged to exercise their freedom as a means of developing personal responsibility, and extra-curricular activities grew in importance.

The Delta Kappa Epsilon house is part of the first wave of chapter house construction on the campus of the University of Illinois at Urbana-Champaign, lasting from 1906 to 1917.

Architectural Features:
The architecture of chapter houses was seen as a way of educating students by exposing them to classical design. On the Urbana-Champaign campus, the majority of chapter houses were built by local architects in revival styles (e.g. Classical Revival, Gothic Revival, etc.) The Beta Theta Pi house was constructed in the Tudor Revival style by developer Marion F. Tackett using plans drawn by chapter member E.G. Oldefest.

Occupants:
Delta Kappa Epsilon was founded at Yale in 1844. The Delta Pi chapter of the University of Illinois at Urbana-Champaign was chartered in 1904 and subsequently ordered construction of the house. Notable residents from this period include football player Ralph E. Fletcher and Illinois State Treasurer Richard Rowe.

In 1921, Delta Kappa Epsilon sold the building to Alpha Sigma Phi, who occupied the building until 1929. During this time, the house was residence for a number of notable athletes including Lloyd Burdick (football and wrestling) and Bernard F. Oakes (football and track.). It was also home to future investor Hal Yaeger and Raymond Glos, a future Assistant Dean of Men (1929-7).