A National Historic Landmark, the Jacob Broom House was originally constructed by its namesake in 1795. The home is significant for its age and association with Jacob Broom, who was one of the signers of the Constitution. The Late Georgian-style home has gone through several alterations and additions but the section of the home with main entrance largely consists of the home Broom built. Broom worked as a surveyor, businessman, real estate developer, and even invested in building toll roads, canals and bridges. Although a signer of the Constitution, his role its is drafting was minor and was not nationally known at the time. Among his ventures was building a cotton mill on the property. The house is also notable for its association with the Éleuthère Irénée du Pont who bought the house in 1802. Du Pont was a French chemist who founded a gunpowder manufacturing company (south of the house where the Hagley Museum is) that would evolve into the DuPont chemical company. The Du Ponts have been one of the richest families in the country.

The Jacob Broom House was originally built in 1795 by its namesake, Jacob Broom, who was one of the signers of the Constitution. 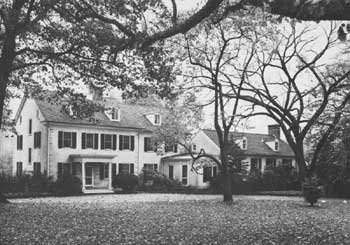 Jacob Broom received formal training in surveying which he used to start his business career. In 1784, he was elected to the state legislature and then in 1787 was elected one of the state's delegates to the Constitutional Convention in Philadelphia. It was there that he signed the document. Broom did marry and had eight children with his wife, Rachel.

The house is a private home and not open to visitors.