On September 13, 1781, the settlers of Painted Stone Station, established by Squire Boone, were ambushed after evacuating their homes in Shelby County, Kentucky, not far from Louisville, on their way to Linn's station. They were attacked by a group of Native Americans led by British Captain Alexander Mckee, where around 15 settlers were killed. The following day, a group of 28 armed men led by John Floyd of Linn's Station made their way to bury the dead. They were again ambushed by the same natives; 17 men were killed in Floyd's Defeat. These coinciding events were some of the bloodiest in Kentucky up to that time.

A modern day reenactment of Long Run massacre. This can help us understand the context of the massacre, what kind of settlers were part of the group that was attacked. 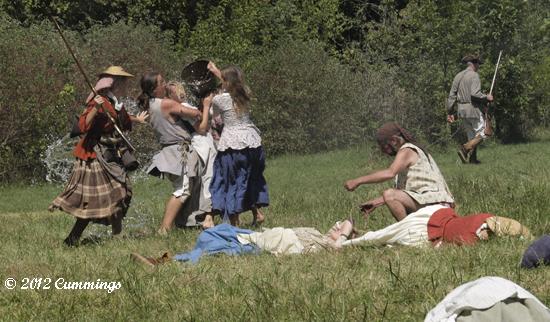 A painting of Squire Boone as a pioneer, who was the founder of Painted Stone Station. 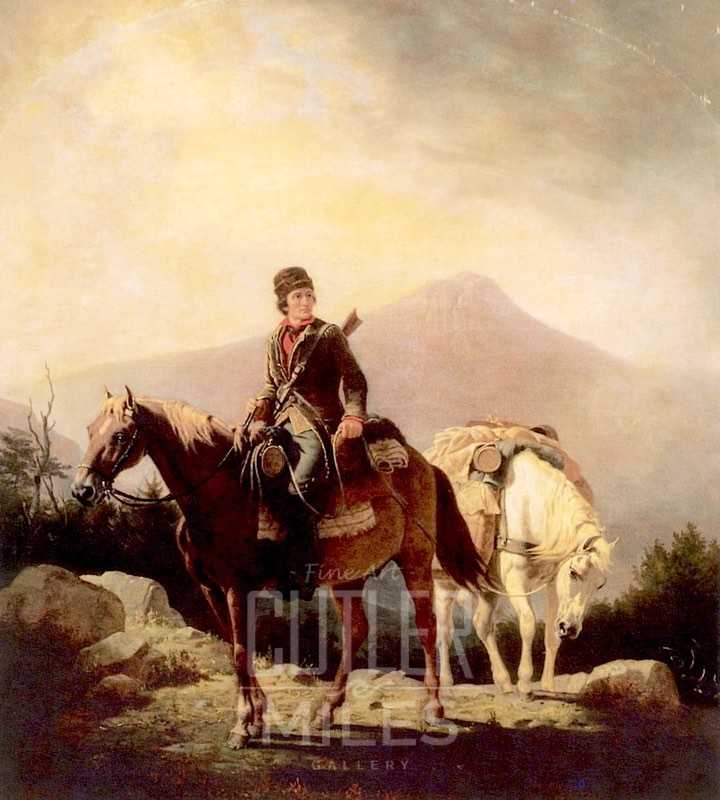 The modern site of Long run Massacre. The surrounding terrain left little room to seek shelter during the ambush, and left the settlers vulnerable to gunfire. 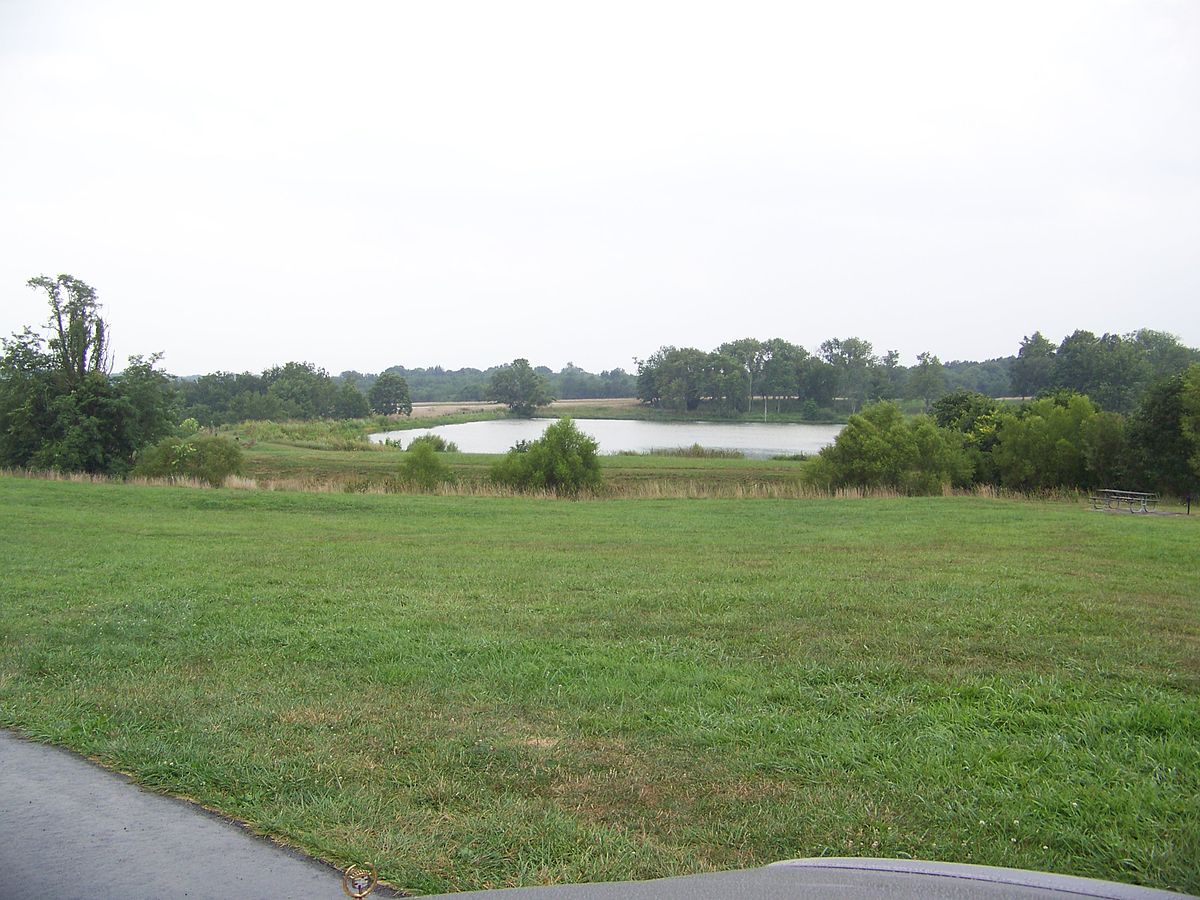 Squire Boone was a brother to the famous pioneer, Daniel Boone. Like his brother, Squire was also a pioneer in Kentucky. Boone helped his brother and his team to establish Boone Station, known today as Boonesburough. In 1779, Boone was shot in the shoulder in the Siege of Bonesborough, and was taken out of action. In 1780, Squire Boone moved his family north and set up a station with 13 other families in Shelby County, Kentucky, called Painted Stone Station, which acquired its name from when Squire first visited in 1776 and marked the spot with a stone which he wrote his name and the date on. The area where the station was located was not far from what would become the city of Louisville, and was deep in Shawnee native territory.

The station was located in a relatively populated area with several other stations, including the settlement at the Ohio River Falls (Louisville). The settlement was subject to repeated Indian attacks and raids. In one of such attacks, Squire Boone was shot twice, once through his side, and the other through his arm. The wounds did not kill him, but eventually may have saved his life. Boone and the settlers of Painted Stone Station became aware of an impending attack through Major Bland Ballard, who helped settlers evade native attacks. Some settlers decided to abandon their homes in search of safety in the other stations near Beargrass Creek, which were better protected. Due to his injuries, Squire Boone was forced to stay in the fort with one other family while others evacuated.

Leading up to the attack, Governor Thomas Jefferson had instructed George Rogers Clark to form a campaign to drive the British from Detroit the next year on December 25, 1780. Because not enough men could be recruited, Clark followed his plans of sending men down the Ohio River with around 400 troops, hoping to recruit more in Kentucky. After waiting in Wheeling for several days for additional men from Colonel Archibald Lochry, Clark assumed his mission had failed, and began traveling down the river just 12 hours before Lockry arrived with 80 men on August 8, 1871. To engage forces against Clark’s army, the British Superintendent of Indian Affairs sent his best warrior into the Ohio Valley, Mohawk Chief Thayendanegea, known as “Captain” Joseph Brant.

Brant gathered around 100 Native Americans and arrived in Ohio ahead of Clark, but let him pass from fear of the impending battle. When Lochry’s men landed on August 24, however, the group of Native Americans attacked, killing or capturing almost all of Lochry’s men before he surrendered. Several days later, Brant was joined by 100 white men commanded by Captain Andrew Thompson and 300 Native Americans under Captain Alexander McKee, who proceeded down the Ohio River. As Clark erected a fort at the mouth of the Kentucky River, scouts from the Native Americans returned with prisoners who informed them that no expedition was set to be carried out against their village that season, causing the Native Americans to break off into smaller raiding parties, some of which went home. Brant and McKee managed to keep around 200 Native Americans, which was too small a force to attack Clark, but large enough to attack the easiest nearby target, Squire Boone’s Station.

After warnings of the attack and dispersing the station, about 8 miles from the nearby Linn Station, the settlers encountered the group of Shawnee natives and British soldiers led by McKee. The British force attacked the group of men, women, and children, and the scene quickly became a dash to reach Linn's Station. The resulting ambush killed at least 7 but no more than 15 settlers, including some women, although conflicting numbers on historical markers report that 60 settlers were killed. The surviving families escaped and made it safely to Linn’s Station that night. The following day, 28 armed men from Floyd's Station set out on a mission to bury the dead and rescue survivors from the ambush. The men were members of the Jefferson County militia, led by Colonel John Floyd, who was responsible for the settler's defense in the area. Before the men could reach the site of the attack, they were also ambushed by the Native Americans, who waited in the area for them. During the attack, 17 of Floyd's men were killed, and he was forced to retreat with the small group of men he had left.

A few days later, a force of 300 armed men from the Ohio River Falls settlement arrived at Painted Stone Station to rescue those who remained. After the station was abandoned, Squire Boone attempted to return to the station multiple times, but failed until 1783, when he found the station had been burned. The Long Run Massacre marker is located near Boston, Kentucky, along Shelbyville Road. A historical marker was erected on the site in 1966 by the Kentucky Historical Society and Kentucky Department of Highways. The inscription reads:

"One mile south. Scene of massacre, undoubtedly the bloodiest in early Kentucky, which took place, 1781. A Miami Indian party killed over 60 pioneers en route from Squire Boone’s Painted Stone Station to safety of forts at Falls of the Ohio. Next day, reinforced by British Capt. McKee’s Hurons, they killed 16 of 25 militia led by Col. John Floyd to bury massacre victims." (5)