Completed in 1900, this former county courthouse is one of the most recognizable buildings in the region and is home to the Harrison County Historical Museum. The Neo-Classical building was designed by J. Riely Gordon and served as the county courthouse until 1964. The building is known for its iconic columns, towering dome, and the bronze statues that surround the dome and stand over the public square.

The Goddess of Justice soars above the city of Marshall. The clock faces and eagles are also clearly visible. 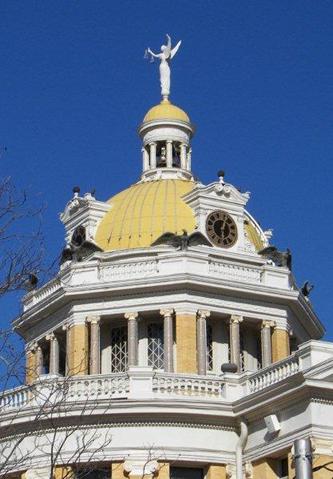 Every winter, Marshall celebrates the Christmas season with a Wonderland of Lights; the pinnacle of the light display is the former county courthouse. 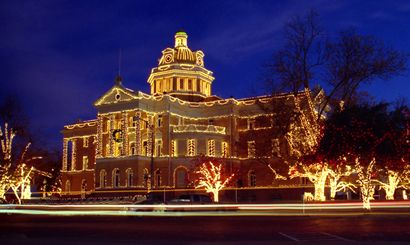 The current county courthouse is of a much more modern style and sits across the square from the original building. 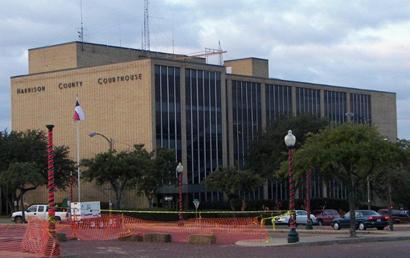 Standing three stories, the Old Courthouse was built in the Neo-Classical/Beaux Arts style.  This structure was the first in this style for architect James Riely Gordon. Yellow brick and carved Leuders limestone make up the main structure of the building and are accented by towering pink granite columns.

During the building's operation, a worker hand cranked two hundred pounds of weights to the top of the tower every eight days to keep the chimes of the original clock in working order.  At the apex of the dome rests a statue of the Goddess of Justice with scales on a lantern base.  The interior of the building is known for its stained glass and paintings decorating the atrium and courtroom.

Harrison County was named for Jonas Harrison, a well-known lawyer and public official in the area, in 1839, when it was organized.  In the same year, Marshall was established as a town in East Texas.  In 1842, Marshall was named county seat as it was located in the geographical center of the county.  By 1850, Marshall had become the fourth largest town in the state and was known for the class of wealthy land and slave owners that occupied the thriving plantations of the area in the 1860s.  At the turn of the century, J. Riely Gordon’s design had come to life at the hands of C.G. Lancaster in the form of the Harrison County Courthouse. The original building did not include the east and west wings that are part of it today; those were additions built in 1924 and 1927.

The age of the building made extensive restoration and preservation a priority for the people of Harrison County. Throughout the mid-1900s, the statues surrounding the building saw more restoration, as the arm, wing, and scales on the Goddess of Justice and several damaged eagle wings were replaced with new metal.  The wings were reoriented to face down in 1965 in an effort to reduce wind friction, but they were returned to the original upright position in 2009. In 2004, Harrison County students participated in a restoration fundraiser, a program called Eagles for Eagles, where they competed to raise the most money to aid the replication of their “adopted” eagle. All of this effort to restore the building wasn’t done to keep it as the courthouse, but instead to renovate the building for the new Harrison County Historical Museum in 2010. This museum has thousands of artifacts and a wide variety of exhibits featuring local history and attractions. The third floor of the building still houses government offices.