This historical marker at the Newton railroad depot commemorates the Union's raid of Confederate supplies and an attack on the Confederate-held rail line in Newton as part of Grant's larger mission to divert Confederate soldiers and allow his army to cross the Mississippi River undetected as they prepared to attack Vicksburg. Grant assigned Colonel Benjamin Grierson to lead the diversionary raid which occurred in this area from April 17th to May 2nd, 1863. On April 24, 1863, Grierson arrived at Newton and destroyed part of the railroad and the depot. This made it difficult for the Confederate Army to send supplies to their soldiers further down the line and helped divert General Pemberton's attention as General Grant's army crossed the Mississippi River.

Grierson, seated center with hand on chin,surrounded by his staff. 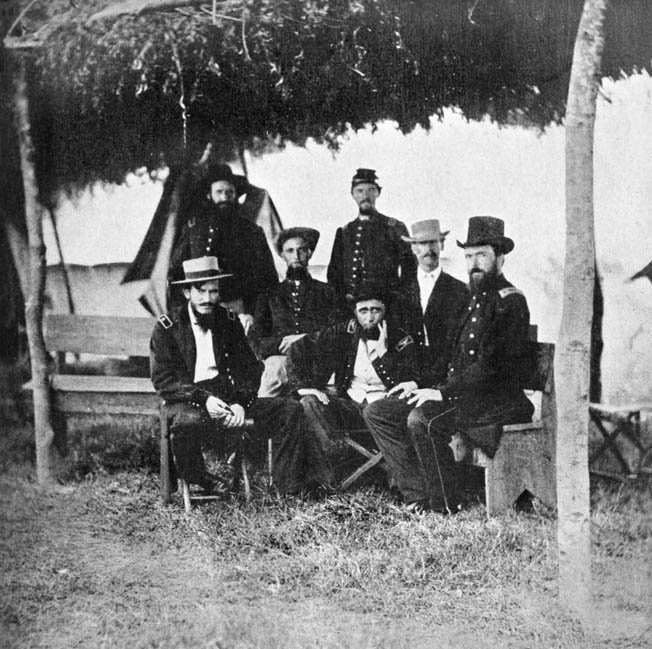 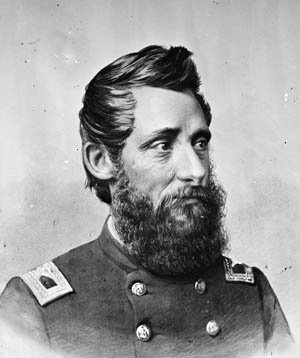 The train depot at Newton. 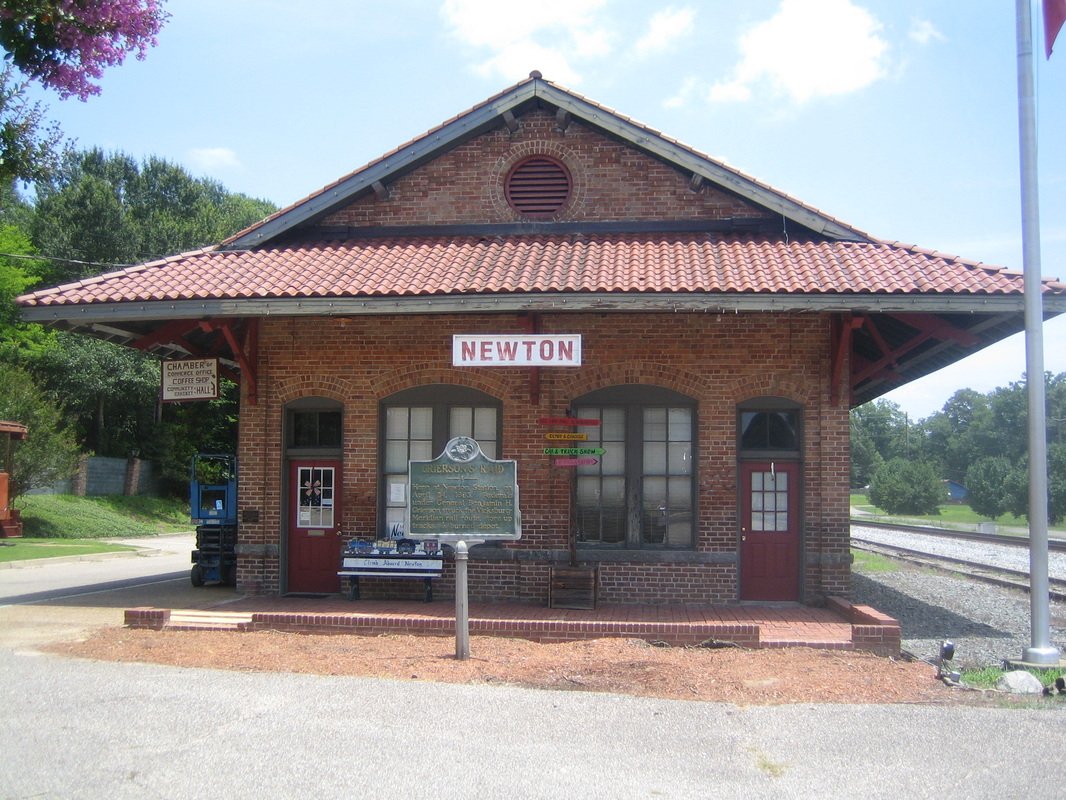 Marker for Grierson's Raid is at the train depot in Newton. 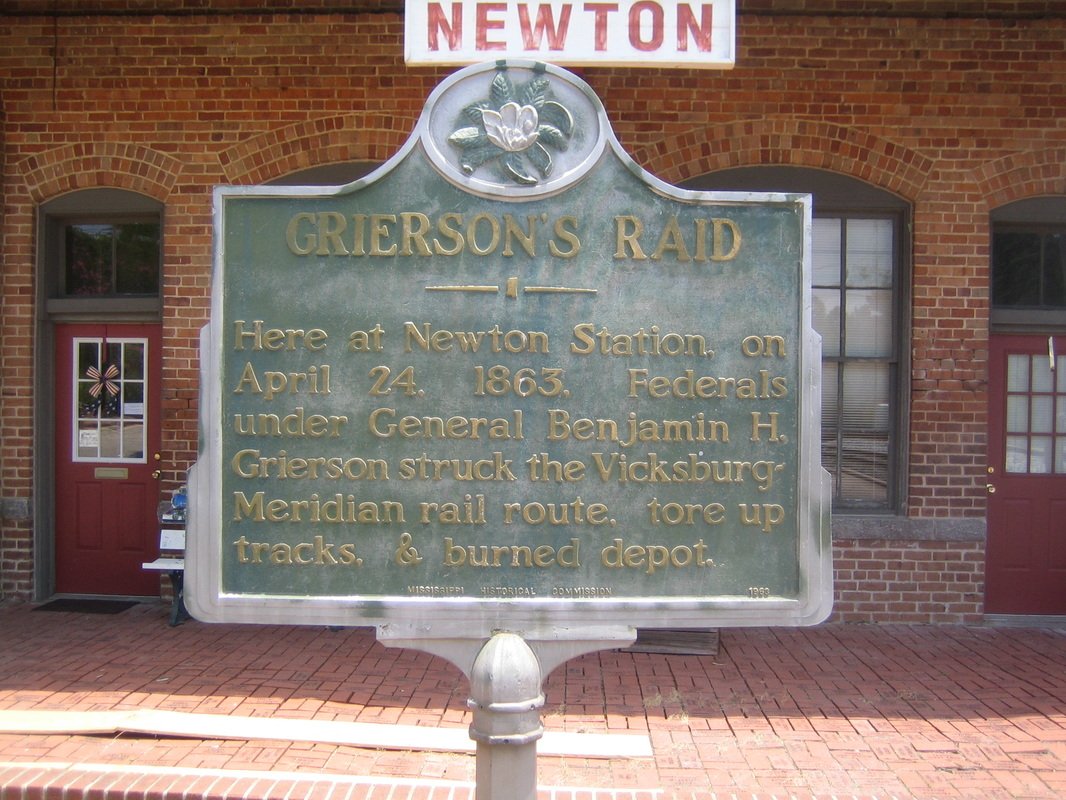 Recreation of the Woodruff Gun "2 Pounder" used during the raids. 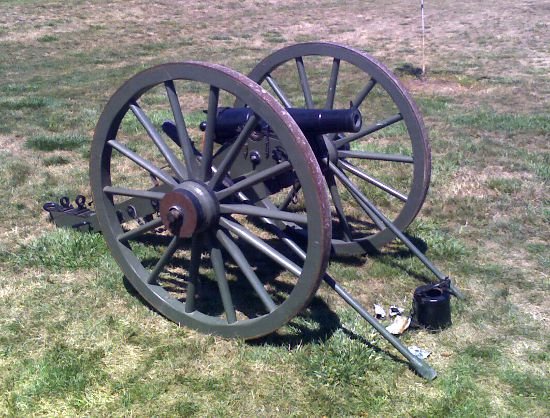 As Vicksburg was the last Confederate stronghold on the Mississippi River, the Union made the elimination of the Confederate defenses along the river a leading goal of their 1863 campaign in the West. Major Ulysses S. Grant led the attack on Vicksburg and decided that he would need a diversion to get John Pemberton's attention away from his soldiers crossing the Mississippi River. General Grant and William Tecumseh Sherman chose Colonel Benjamin H. Grierson to lead raids down the Mississippi, and in the process destroy any Confederate supplies.

Grierson commanded 1,700 men- the 6th Illinois Cavalry led by Colonel Reuben Loomis, Colonel Edward Prince’s 7th Illinois Cavalry, and Colonel Edward Hatch’s 2nd Iowa Cavalry, along with a battery of six 2-pounders, on the17th. His orders were to travel as deep into the state as possible, cut any Confederate supply lines and return back to the Union line when possible.

On day eight of the mission, Grierson reached Newton Station in Mississippi. They arrived and destroyed Vicksburg-Meridian rail route, burning the depot and tore up the tracks. Two locomotives, 25 freight cars filled with commissary stores and ammunition were burned, along with additional stores and 500 muskets found in town.1

"The damage to the Southern Railroad extends over a distance of four and a half miles, commencing a mile west of Newton, and running east. Two bridges, each about a hundred and fifty feet long, seven culverts and one cattle gap constitute the track injury done. Most of the culverts are small and easily repaired. An experienced gentleman informs us that proper energy will again place the road in working order in four days or less. Twenty freight cars were burned at Newton, and the depot buildings and two commissary buildings. The telegraph wire was taken down for miles, and cut into pieces."2

Grierson's Raids were successful in diverting Confederate attention from General Grant's Main effort to cross the Mississippi to get to Vicksburg.