Castle Rock was once only land used by Native Americans to hunt and thrive. The conditions of the area was perfect for the different game that the people lived off of, such as antelope, buffalo, deer, and rabbit. Rumors of gold and more land eventually brought the white settlers west, but the discovery of rhyolite stone near Plum Creek brought even more people, and put Castle Rock on the map. In 1874 Jeremiah Gould donated 120 acres of land to create the town of Castle Rock. The town Courthouse was designated and 77 lots were auctioned off. Soon after that, railroads made their way past the community and trading of the rhyolite stone increased and the town continued to grow. Within the town of Castle Rock lies the Castle Rock Museum. Before it was a museum, the small building was a depot that resided right next to 3rd Street in the bustling town that Castle Rock was in 1875. The building was constructed of the rhyolite stone that was native to the area, and the work was incredibly detailed and in the style of the period. In 1970 the depot was moved from the trackside and to it's current location on Elbert Street, one of the Streets named and created by Gould in 1874. In 1996 the building was to be a museum and it was carefully restored by the recently formed Castle Rock Historical Society. The museum still has some of it's original fixtures in it such as the old ticket window, and baggage area, along with 125 years of graffiti on it's walls. Even though Castle Rock is small, it was very important to Colorado's growth. Its large amount of rhyolite stone made it important. In 1991 a group of citizens who realized the importance of their small town began the Castle Rock Historical Society. They carefully restored the museum itself and many other old buildings that resided in Castle Rock in order to preserve so much of their history and heritage. The society organized things such as tours of the actual houses owned by people during the historic time of when Gould lived in the town. Bus tours and significant speakers are other things that the society organized and held for their community. Within the museum are many different exhibits, one of them being the history of firefighting within the town. Inside the exhibit there is a self-propelled fire hose nozzle, a backpack fire pump, a hand pulled fire cart, and a rescue basket that is one that was often seen hanging down from rescue helicopters. There are also color images of the fire that destroyed the Douglas County Courthouse in 1978. One of the biggest exhibits within the museum is the Continental Divide Raceway exhibit that is on permanent display. The Continental Divide Raceway was located about two miles south of Castle Rock. It was 2.66 miles total, half a mile of oval with a quarter-mile drag strip. It opened in 1959 and it closed in about 1983 when the land was sold for development. The official Castle Rock Museum site claims that "a number of USAC and SCCA professional races, including on Trans-Am race, were run at CDR. The track attracted racers such as Mario Andretti and A.J. Foyt as well as stars like James Garner and Dick Smothers." As brief as the history of the track may have been, it was an exciting time for the residents of Castle Rock, and will now be remembered forever. 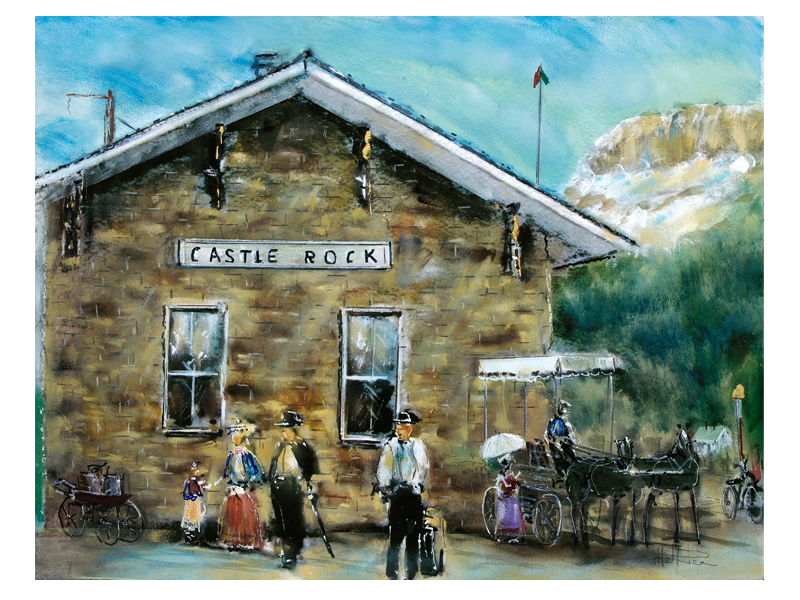