The Palmolive Building (A.K.A. Playboy Building)

Built in 1929 at the tail end of a long period of economic growth and construction in Chicago, this served as the home to the Palmolive-Peet-Colgate company for only five years although the company continued to own the building until 1943. Hugh Hefner and his Playboy Enterprises began leasing the company in 1965 and for awhile, the Playboy name was illuminated at the top of the building. Atop the building, a powerful beacon named after famed pilot Charles Lindbergh was put in place to help traffic into Chicago's Midway Airport, but it also helped turn the building into a highly-recognizable landmark along Chicago's Lake Michigan shoreline. The light shines today atop what is now a building filled with high-end condominiums. The Palmolive Building is renowned among architectural historians for its stepped design and Art Deco features.

Playboy Building and the Lindbergh Beacon, 1969 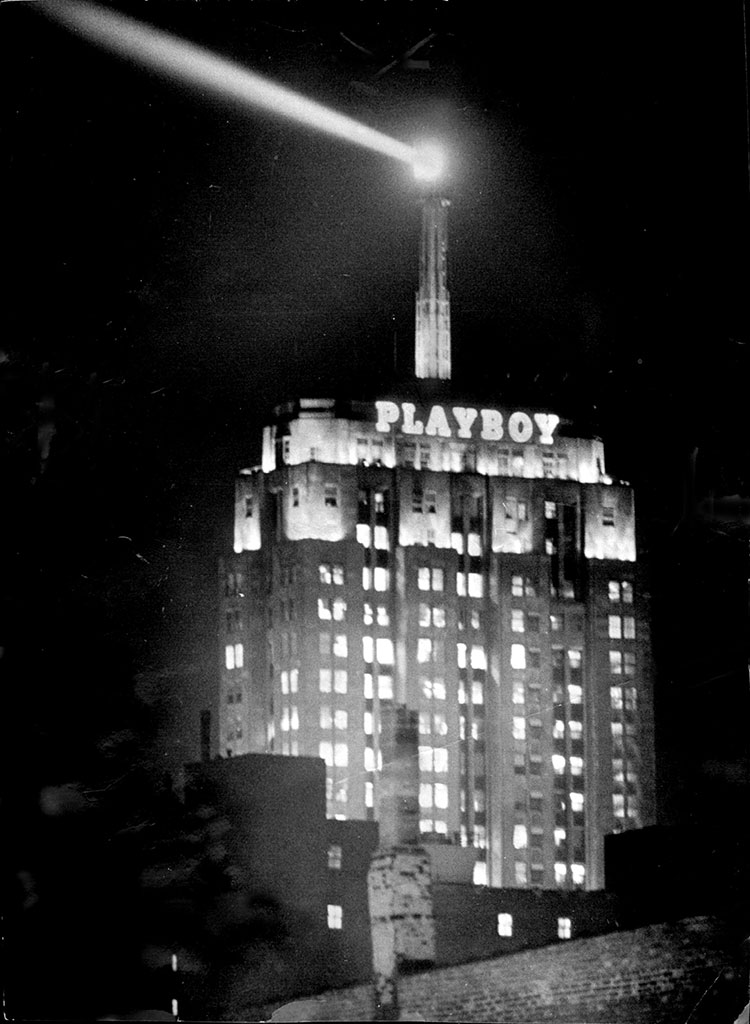 Oak Street Beach View: This is a photograph of Oak Street Beach in Chicago, IL on a cold night in January. The road in this picture is Lake Shore Drive. The bright, art deco building with the lit beacon is the Palmolive Building. 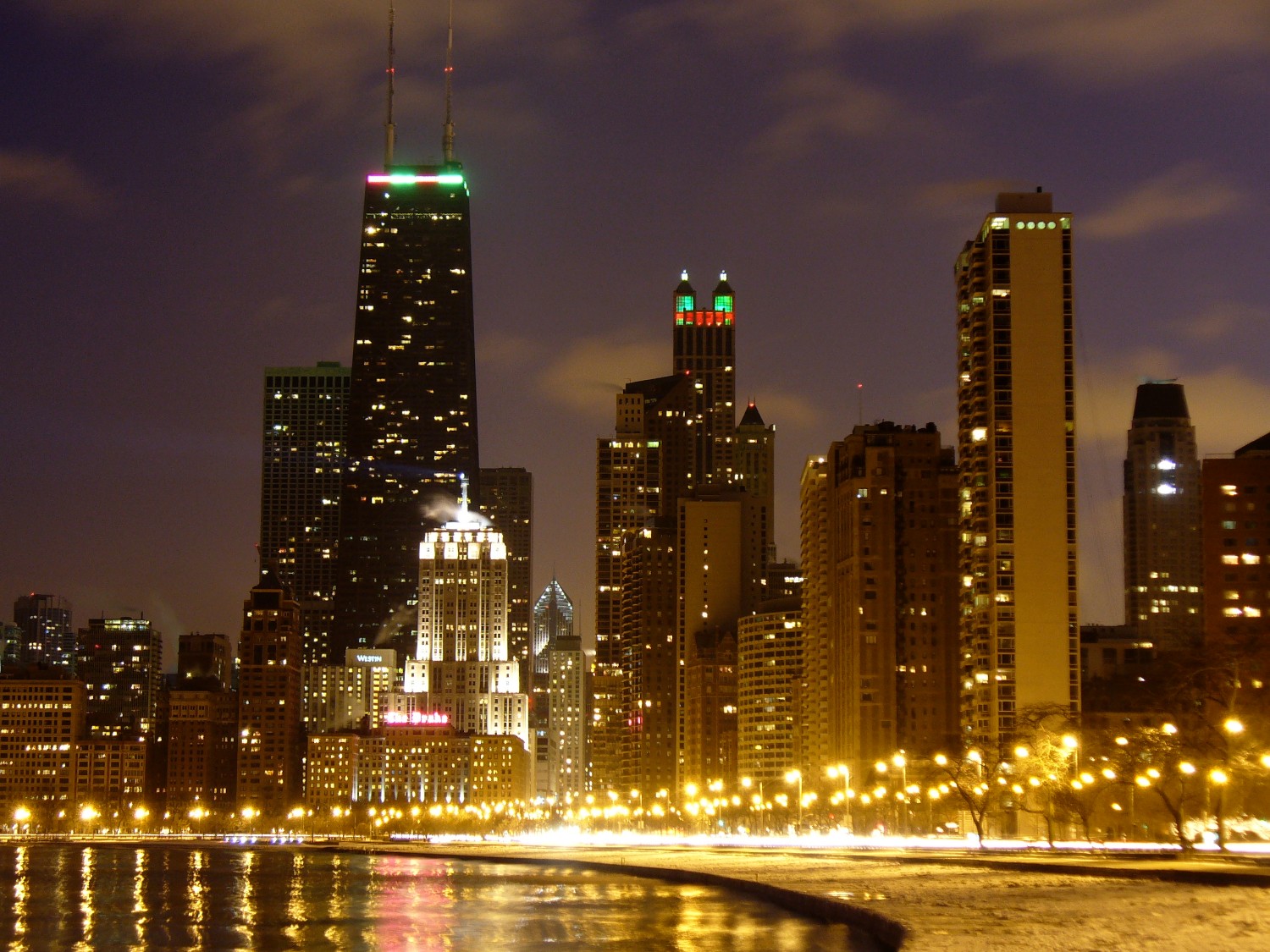 Chicago's urban planning fostered tremendous growth along its now famous Michigan Avenue and a boom in skyscraper construction in the early 20th century. 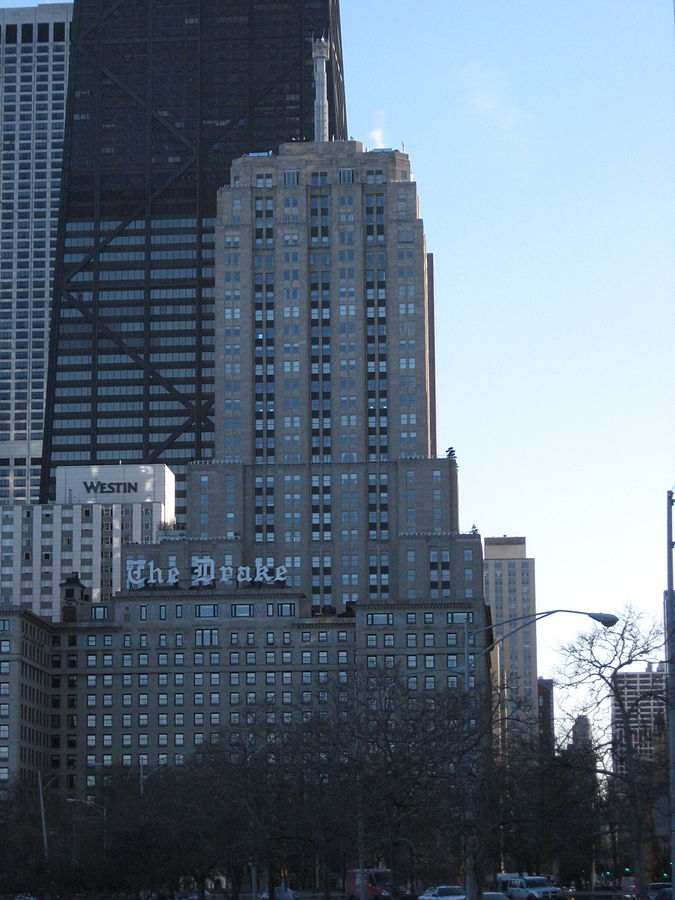 The Palmolive Building (919 North Michigan Avenue) was built in 1929 after years of a national and civic economic boom that fostered a demand for office space. The demand for space inspired Chicago to change its zoning laws in 1920 and 1923 that had restricted heights, which led to the led to a profound increase in the construction of taller, larger skyscrapers within the city, including the Palmolive Building. But, the Palmolive Building is likely most remembered for its role as the office headquarters to the Playboy Enterprise, from roughly 1965 to 1989. While Playboy occupied the building, a large "P-L-A-Y-B-O-Y" sign adorned the exterior, which lit brightly at night, easily seen to those approaching downtown from the north on Lake Shore Drive.
The Burnham Plan (Plan of Chicago) in 1909 and subsequent plans resulted in the eventual widening of Michigan Avenue and a bridge that connected the road to the north side of the city. The street grew to become a commercial hub of Chicago by the 1920s, helped in part by a booming national and local economy and the city's decision to remove height restrictions, which had been put in place at a time when the economy lagged. Modern technology, a strong economy, a need for large offices, and a legacy of innovative skyscraper-architecture in Chicago all worked towards making North Michigan Ave in Chicago -- now known as the Magnificant Mile (or "Mag Mile") -- a home to many of Chicago commercial skyscrapers, including the Palmolive Building. The building at 919 North Michigan gained fame because of its eye-catching, innovative stepped design and what most consider to be one of the finest examples of Art Deco architecture in the world.
The Palmolive Company started in 1864 as the B.J. Johnson Soap Company in Milwaukee. By 1916, the company changed its name to the Palmolive Company and moved to Chicago. Later, Palmolive merged with Peet Brothers Manufacturing Company which generated a need (or desire) to find a tall office building for which to conduct business. Thus, the Palmolive-Peet Company commissioned the Palmolive Building in 1927 as the first tall office building to be built at the far northern end of North Michigan Avenue.
Original plans called for the construction of a 42-story building built incrementally over several years. However, a final merger with the Colgate Corporation in 1928 ultimately led to a new design -- a 37-story, 468-foot structure built continuously. Despite harsh weather conditions due to the building's location near the Lake Michigan shoreline, the Palmolive Building was completed in April 1929 and then occupied by June.
The Palmolive Building added, in 1930, a two-billion candlepower, 360-degree-rotating beacon, named the Lindbergh Beacon to honor famed aviator Charles Lindbergh. The beacon was intended to help with airport navigation into Chicago's Midway Airport.  That striking feature turned the building into a popular landmark and it remained in operation until 1981.
Complaints from nearby residents forced building owners to turn off the Lindbergh Beacon in 1981 and it remained that way until 2007 when new owners turned it back on, but in modified fashion -- it now runs only from 8 p.m. to midnight and focuses all its light over Lake Michigan by rotating north and south along the lakeshore.
The Colgate-Palmolive-Peet Company moved its central offices to New Jersey in 1934 but retained ownership of the building until 1943. Ownership of the building varied in subsequent years until it was leased by Hugh Hefner and his Playboy Enterprise in 1965. The building operated as the home to Playboy until 1989 when it officially moved all its offices to Southern California. Since then, the building's ownership has changed on numerous occasions but currently operates as a high-end condominium complex.