This historical marker, erected by the State of Texas in 1936, commemorates the clash between U.S. troops and Mexican forces that ultimately led to the Mexican-American War. At this location on April 25, 1846, a little less than 70 U.S. Dragoons (cavalry) led by Captain Seth Thornton were ambushed by roughly 1,600 Mexican troops led by General Anastasio Torrejón. At the time, most in Mexico considered the Nueces River to be the border between the two nations. Following the skirmish, eleven U.S. soldiers were dead while 46 U.S. troops, including Captain Thornton, were taken prisoner.

Sketch of Captain Seth B. Thornton's cavalry skirmish at Carricitos Ranch on April 25, 1846. 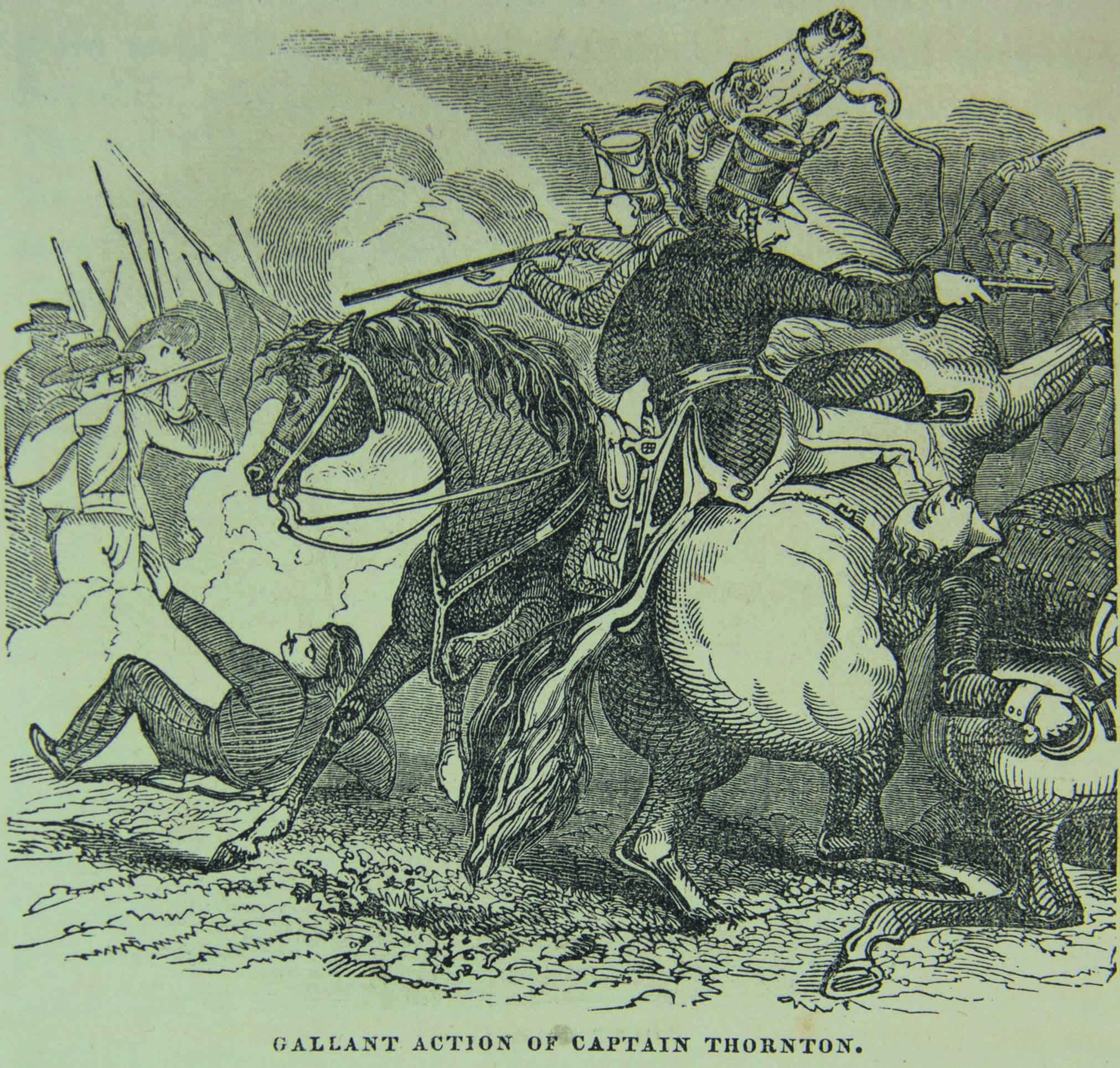 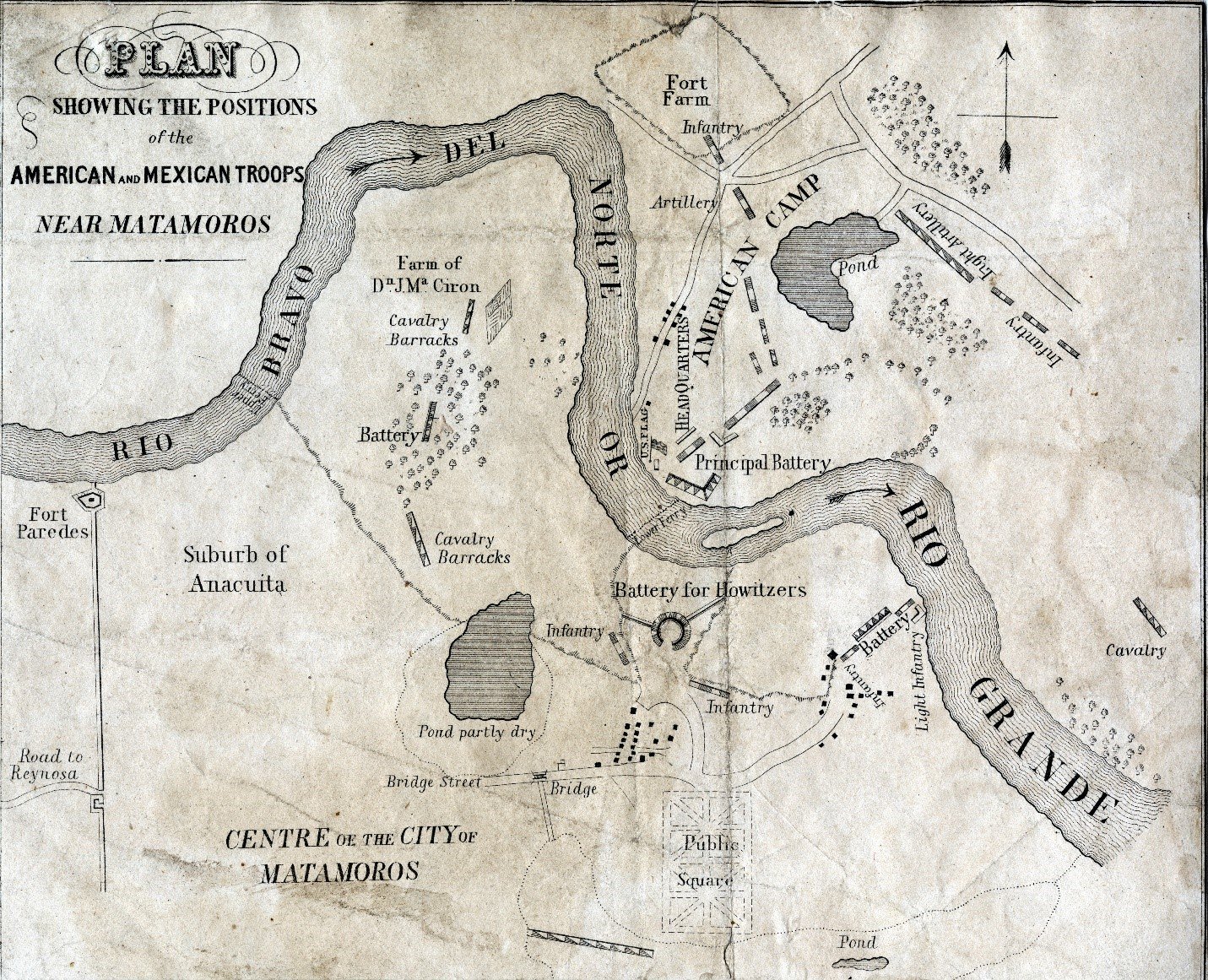 This monument was erected by the state of Texas in 1936 to commemorate the incident which sparked the war. 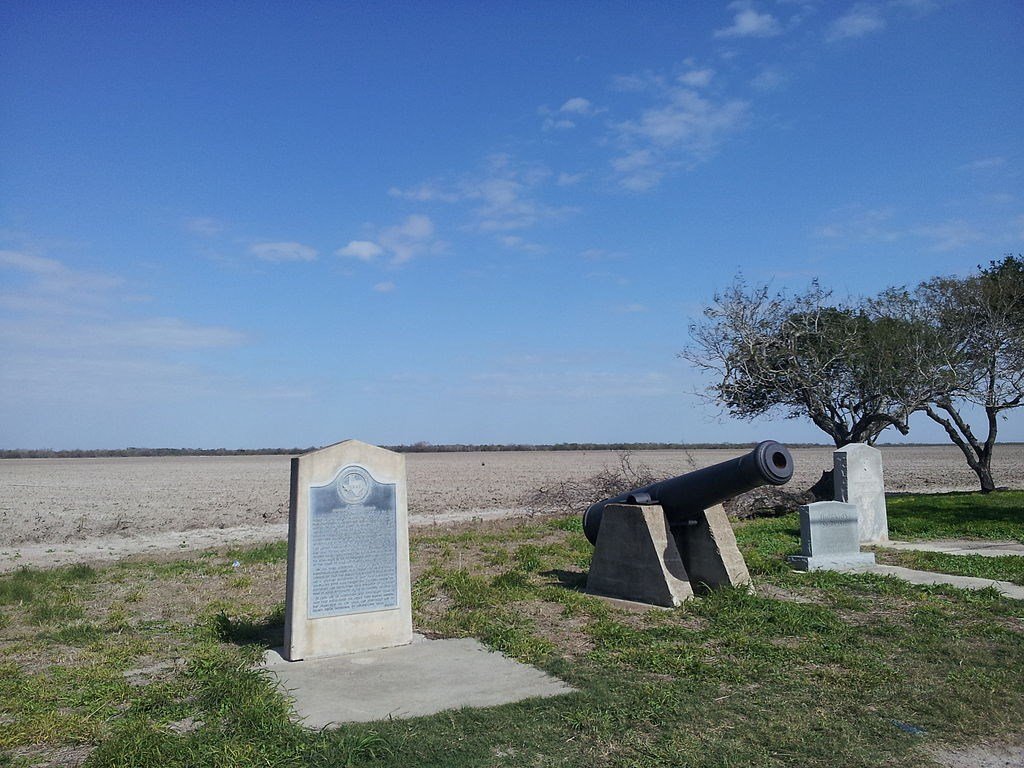 On December 29, 1845, Texas was annexed by the United States. This caused Mexico to break relations with the United States as Mexico never accepted Texas independence and feared that American would attempt to expand their territory beyond the Nueces River that had served as the boundary of Texas.

American President James K. Polk favored expansion and was willing to start a war, believing that such a provocation would lead to victory and enhance his reputation. To both guard the newly-acquired land in Texas and provoke a Mexican reaction, Polk ordered Brigadier General Zachary Taylor to position 1,500 troops along the Nueces River in Texas. As negotiations between Mexico and America failed, Polk sent Taylor’s force to the Rio Grande. In late March 1864, Taylor's force had created what they dubbed "Fort Texas" just north of the Rio Grande in the modern-day city of Brownsville. On April 24, 1846, Taylor received reports of Mexican troops crossing the Rio Grande below his camp and upriver. He ordered Captain Seth Thornton to investigate the reports.

The morning of April 25, 1846, Captain Seth Thornton and his 60 dragoons were investigating reports of the crossing. As they approached a ranch, they spotted a cluster of horses and entered through the only gate. As Americans were heading towards the huts at the end of the field, 1,600 Mexican troops led by General Anastasio Torrejón had arrived at Rancho de Carricitos. Unseen by Thornton’s force Torrejón ordered his troops to surround the ranch. Torrejón then sent his remaining troops in through the only gate to block the Americans in. As the Americans were suddenly surrounded by Mexican troops they decided to direct an offensive at one point of the line in hopes of charging through the Mexican line. Heavy gunfire by the forces inside the ranch immediately turned the dragoons around.

As they attempted to escape, Thornton’s force tried to cut through fences surrounding the ranch but soon saw themselves facing even more troops and were soon forced to surrender. Eleven U.S. Soldiers died while the remaining 49 including captain Thornton were captured. After the skirmish, General Taylor immediately sent news to President Polk informing him of the incident. On May 10, 1846, the news had reached Polk where he delivered a speech that inspired Congress to declare war on May 13, 1846.

"The cup of forbearance had been exhausted even before the recent information from the frontier of the Del Norte[Rio Grande]. But now, after reiterated menaces, Mexico has passed the boundary of the United States, has invaded our territory and shed American blood on American soil. She has proclaimed that hostilities have commenced, and that the two nations are now at war."3

This skirmish resulted in two historically significant consequences. First, it allowed the American press to state that “American blood had been shed on American soil.” This led many Americans to support the war, believing that they had been attacked instead of recognizing that their President had risked American lives to provoke an attack on land whose ownership was disputed. It also led to some degree of overconfidence among some Mexican military leaders that they would be able to defend a direct attack at their northern border when the U.S. military instead chose to bypass most of the border area and attacked Mexico by sea instead.