Built in 1923, the American Fore Building stands a a reminder of Chicago's transition from growing city to an established metropolis in need of urban planning and an expansion of its business district. As a result, Chicago widened Michigan Avenue and constructed a bridge across the Chicago river that opened its North Side, allowing for the development of such buildings at the American Fore Building and a slew of white-collar industries, such as banking, insurance, wholesale commerce, hotels and more. Over time, the entire northern section of Chicago grew tremendously, with Michigan Ave (and Rush Street) servicing as the city's most popular tourist destination.

1918 picture of Michigan Ave. prior to the widening and building of the bridge (five years before the American Fore Building opened). 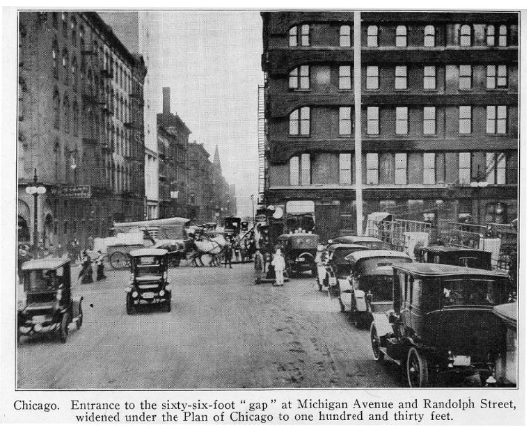 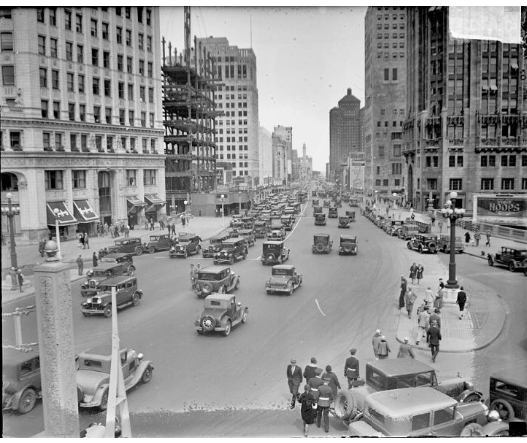 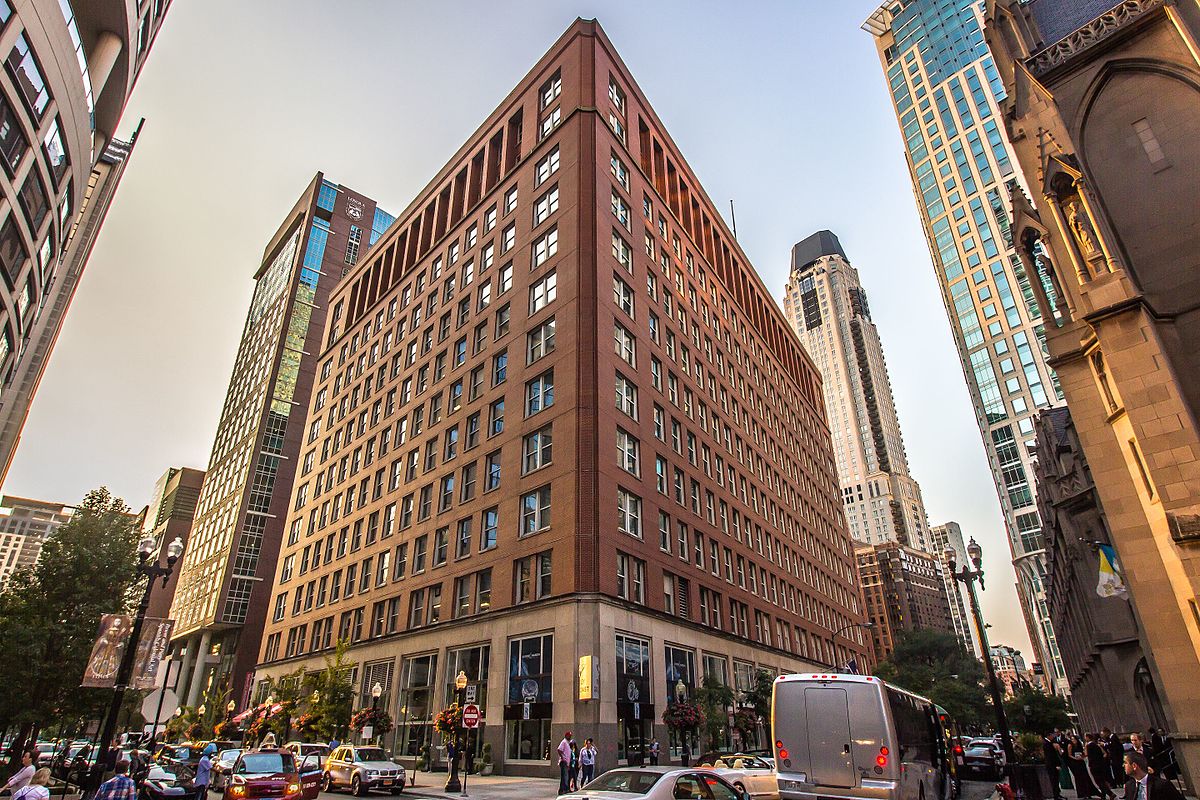 The America Fore Building, located in Chicago's Near North Side neighborhood, opened in 1923 for the America Fore group, a group of four insurance companies with shared leadership. After decades of meteoric growth, notably in the wake of the Great Fire in 1871, Chicago had emerged as a dominant hub of transportation, commodities, and finance. The 1909 Burnham Plan, or "Plan of Chicago," sought to help organize a city that had grown faster than it could adjust its structures. Two decades later, the North Central Business District Association amended that broad plan. The American Fore Building grew out of those plans, which mostly focused on developing Chicago's now-famous Michigan Avenue and surrounding locations, all north of the Chicago River. Today, Michigan Ave (and Rush Street) exists as a center for commerce, nightlight, restaurants, shopping, and tourism.
Though Chicago was platted in as early as 1830 and incorporated in 1837, the city's significant growth occurred in the post-Civil-War area. Chicago's position far north of the fighting and its natural resources, among other variables, led investors and speculators to gamble on Chicago as a city worth developing. As a result, Chicago grew into the nation's largest commodities market and served as the center of the country's transportation network both for railways and maritime shipping. Thus, Chicago promptly expanded into a major metropolis and subsequently became home to a bevy of wholesale and manufacturing firms, wholesale commerce, large banks, insurance agencies and entrepenuers, to name a few.
The money pouring into Chicago resulted in the evolution of a dedicated financial center consisting of banks, commodities exchanges, stock traders, and insurance companies, mostly located within the central downtown region surrounded by its Elevated Trains, or "EL," an area affectionately referred to as the "Loop."
Between 1912 and 1914, more than one-million square feet of office space was added to the Loop, only to see that pause due to World War I and a Recession during 1919-1920. By the 1920s, amidst a booming national economy, the amount of office space in Chicago nearly doubled, mostly within the Loop and also on the newly developed Near North Side, which enjoyed notably development after enduring significant damage during the Chicago Fire of 1871
At first, The Near North Side stood divided with its western edge dominated by factories and warehouses and its eastern side noted for its wealthy residential areas. As well, the eastern section saw the creation of the Newberry Library (1891) and the Chicago Historical
Society (1892) while rooming hotels and low-income housing filled the dividing lines.
The constant rebuilding and re-zoning created issues for Chicago with crowded roads. blight and a lack of cohesiveness. Thus, in 1909. prepared by Daniel Burnham and Edward H. Bennett the Plan of Chicago was devised and addressed the need to expand the central business district and improve connections north across the Chicago River.  Michigan Avenue and nearby streets were identified as the major connecting link between the Loop and the area north of the Chicago River, and the plan called for extending and widening the avenue, as well as for constructing a prominent bridge over the river and widen Michigan Avenue.
The North Central Business District Association (NCBDA) was founded in 1913 and promptly provided recommendations to limit the height of buildings to ten stories, with a continuous “balcony” line between the second and third floors that would allow for the formation of a consistent uniform base of two stories, all part of a plan to create a look similar to the large boulevards found in Paris and other European center, while also creating a commercial corridor similar to New York's Upper Fifth Avenue.
The NCBDA plan included construction of office buildings, banks, hotels, and shops and recommend the city refrain from building automobile showrooms, saloons, warehouses, and industrial buildings along Michigan Ave and vicinity.  Although Chicago largely accepted the NCBDA recommendations, the city in 1923 adopted its first comprehensive zoning ordinance, allowing North Michigan Avenue to serve as the “fifth volume district,” which including allowances for buildings to far exceed the building height recommendations, although they were still limited to 25 percent of the lot area.
The Michigan Avenue Bridge over the Chicago River and the widening of Michigan Avenue, completed in 1920, opened up the Near North Side for redevelopment as an extension of the central business district and made it easily accessible. As such, building such as the American Fore -- owned by four united insurance companies -- arose in 1923, which at twelve stories made it the tallest building in the district at the time. However, new ordinances offered architects to turn Michigan Avenue into a street filled with high rises.
The American Fore Building represents the turning point of Chicago, from one that had enjoyed tremendous growth after the Civil War through World War I to one that operated as an established metropolis in need of planning and organization. Moreover, the development of Michigan Ave profoundly changed Chicago's makeup, with the north side seeing tremendous growth in white-collar industries, skyscrapers, shopping and eventually becoming a popular tourist destination (known as the "Mag Mile," or magnificent mile). Streets near the Mag Mile, such as Rush Street, are at the heart of the city's nightlife and restaurant industry.

1918 Picture of Michigan Ave - obtained from Northwestern University by the Encyclopedia of Chicago (located, digitally at http://www.encyclopedia.chicagohistory.org/pages/11258.html)