Mount Rose Cemetery is the oldest in Moundsville and serves as the final resting place for many of Moundsville's prominent families including the Tomlinson family, founders of Elizabethtown (the older northeastern part of present-day Moundsville). Graves date back to the late-18th century with the remains of the 22 men who were ambushed by natives during the Revolutionary War in what became known as the Foreman Massacre. The oldest original burial in the cemetery took place in 1799. The cemetery displays many beautiful head stones and monuments and is home to an abundance of wildlife, including deer, rabbits, squirrels, mice, chipmunks and birds. 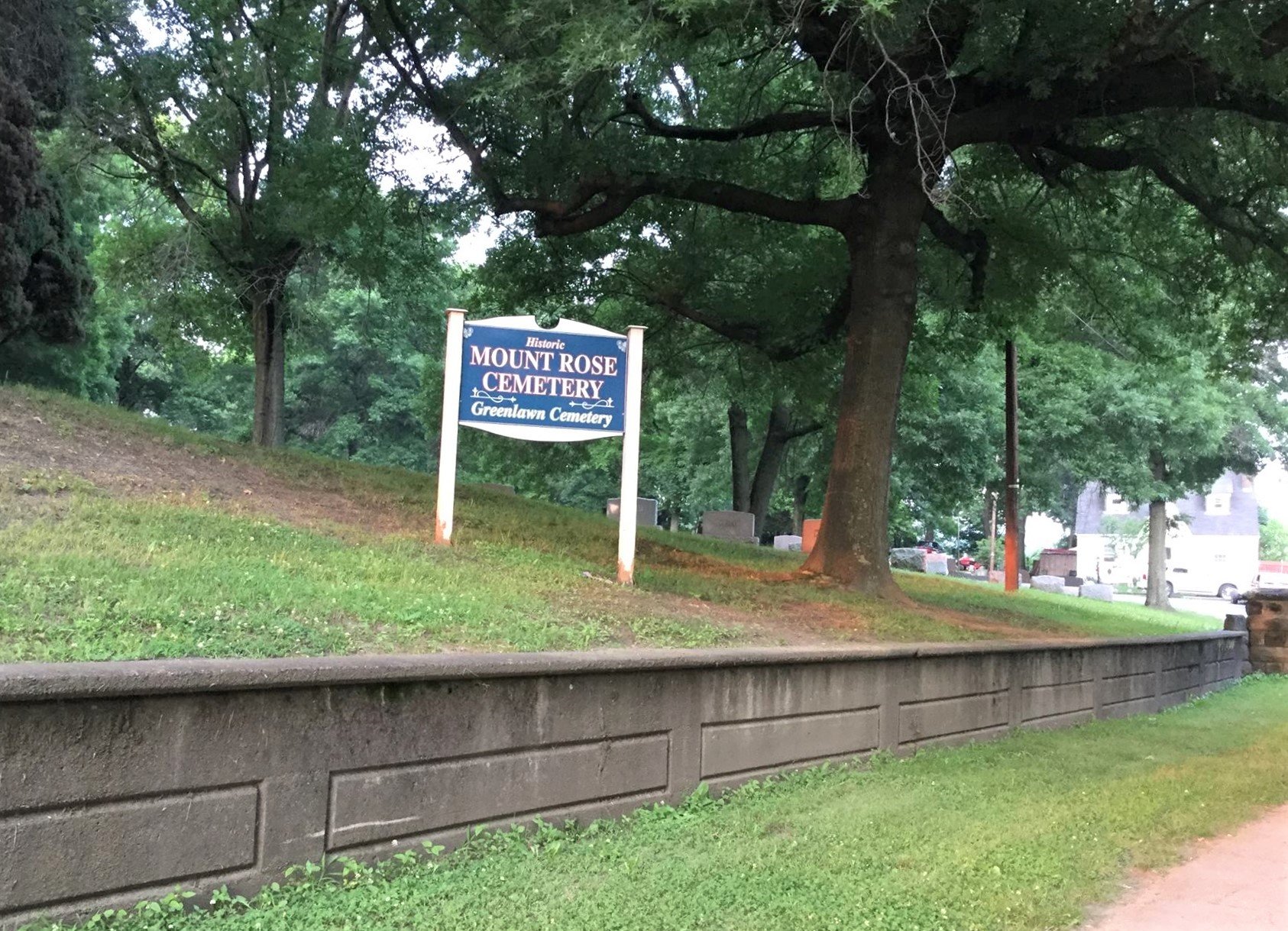 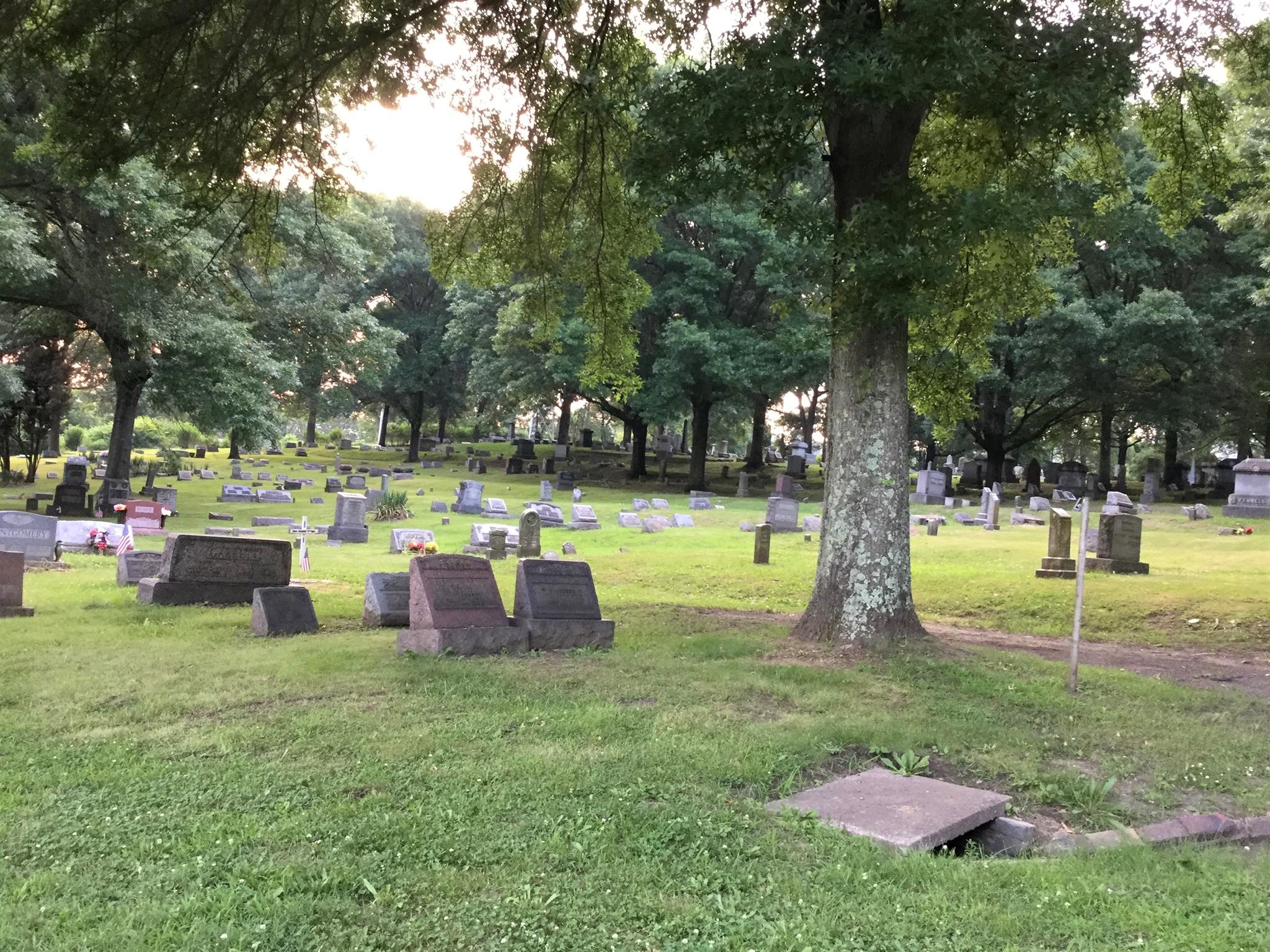 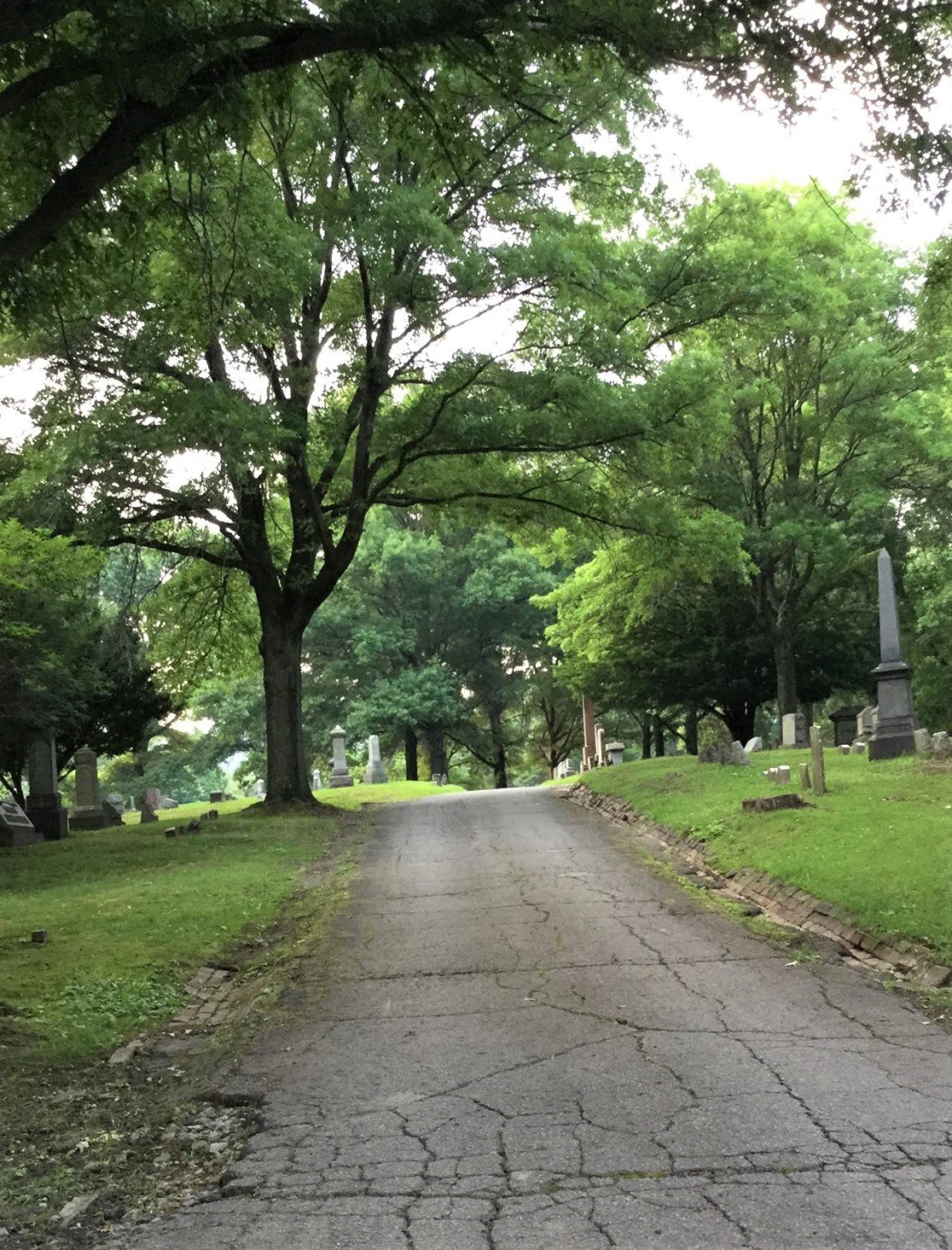 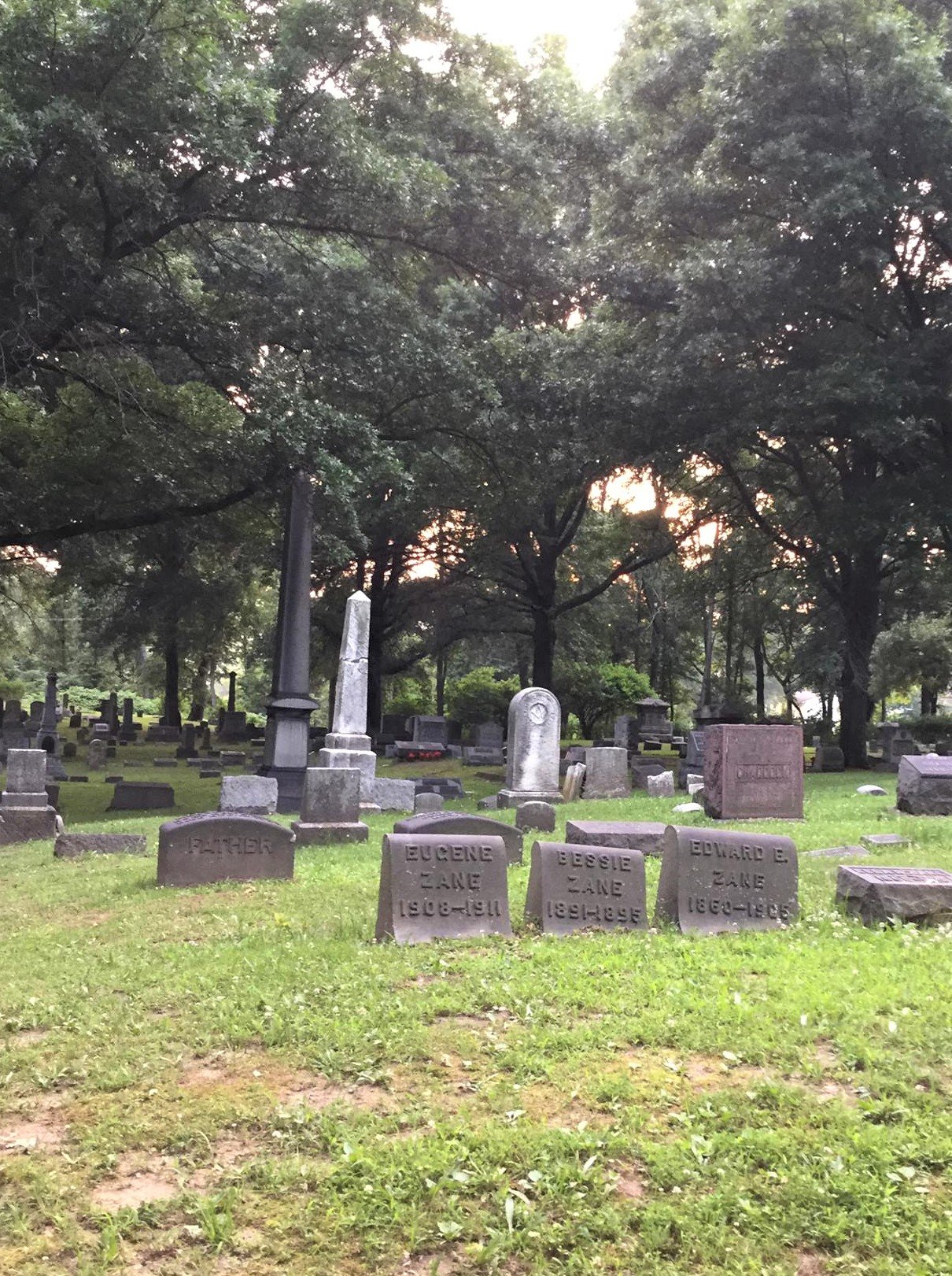 The marker for the Foreman Massacre. 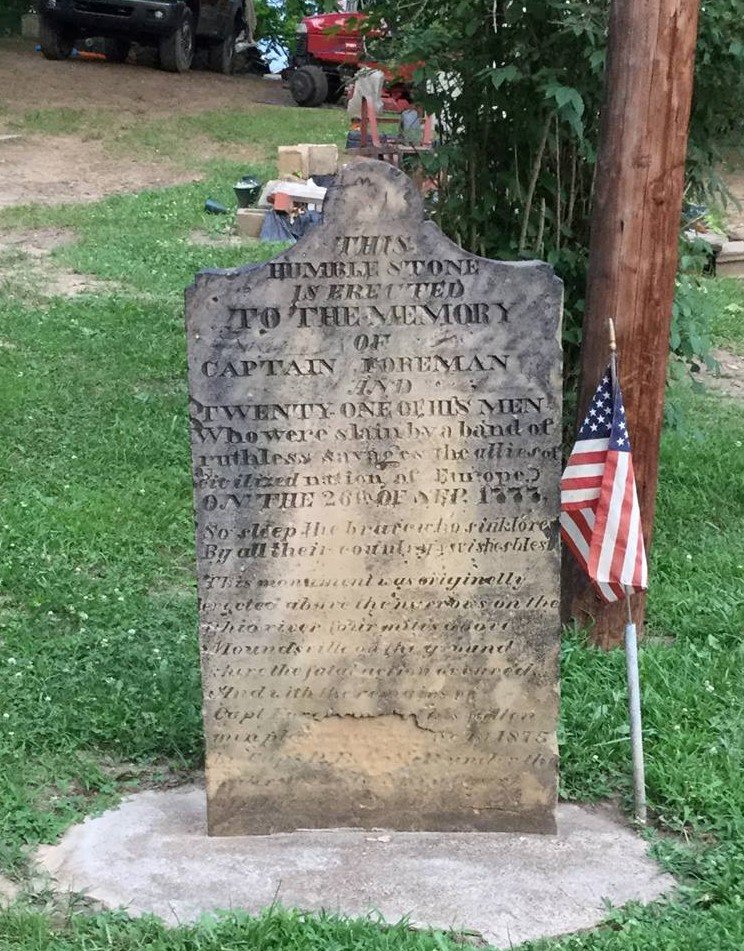 A young buck and what is likely to be his mother. 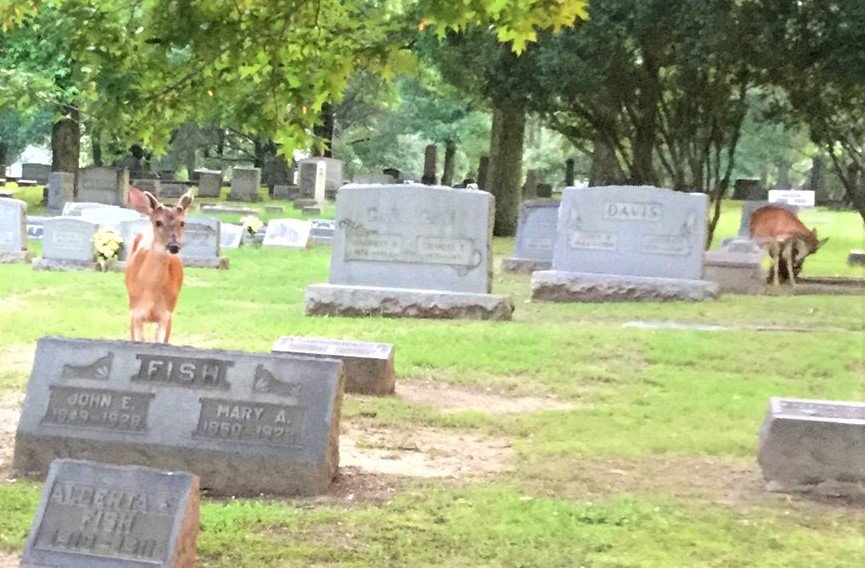 One of the prominent graves in the cemetery belongs to Joseph Tomlinson. Tomlinson scouted the area with his brothers in the 1760s, and was the first settler to build in what is present-day Moundsville, WV. He named his settlement Elizabethtown, after his wife. Along with the Tomlinson family, best-selling author Davis Grubb is buried in the cemetery. Grubb is known for his top-selling books The Night of the Hunter and Fool's Parade, both of which were made into movies and set in Moundsville. Along with members of the Foreman Massacre, there are several other Revolutionary and Civil War soldiers buried in Mount Rose Cemetery.

Among the infamous buried there are prisoners from the Moundsville Penitentiary including Hugh Bragg who was sentenced to death by hanging for the murder of Sheriff John Morton Dennis of Webster County. Other prisoners were buried there, but most are in unmarked graves.

The Foreman remains were moved from their two common graves on location to Mount Rose in 1875. Foreman and his group were a part of a militia numbering 46 men who had come from Hampshire County to defend the frontier during the Revolutionary War. They had been sent from Fort Pitt (Pittsburgh, PA) to Fort Henry (Wheeling, WV) prior to the ambush. The men split into two groups and Foreman took his group of 24 along the river path where they were overtaken by 50 Wyandot warriors led by Half King. Foreman and two of his sons were among the dead. The location of the attack is the north end of the "narrows" between Glen Dale and McMechen, WV (WV Route 2). A roadside historical marker marks the location of the attack, but the original marker and remains are located in Mount Rose.

Greenlawn Cemetery is a newer cemetery separated from Mount Rose by a row of trees. Greenlawn is only approachable by driving through Mount Rose.