The City of Kingwood was named for a grove of big trees. Southeast of the city is Dunkard Bottom, settled by Thomas Eckarly in 1754. Nearby, during Indian raids in 1778 and 1788, many settlers were killed. Martin Wetzel and William Morgan, noted frontier scouts, had narrow escapes.

Historical Marker located on the courthouse complex along Main Street. (view of marker from east to west) 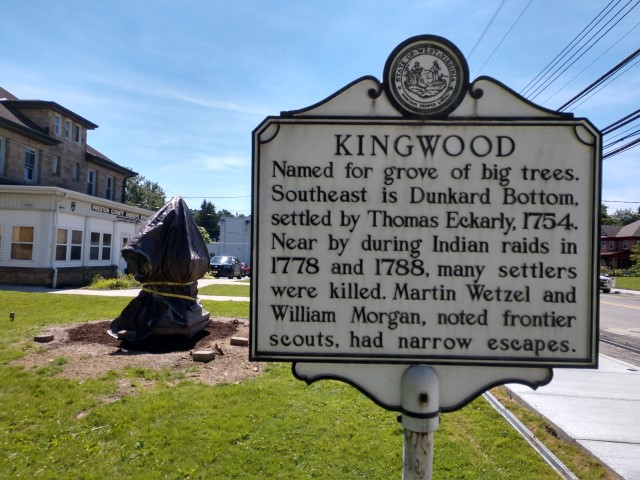 Kingwood was established as a town on January 23, 1811 and was the first town in the Territory of Preston. John Miller and Hugh Morgan owned most of the land upon which Kingwood now stands. They did surveying and began to plan for the town shortly before 1800.

The area was heavily forested and the Great Indian War Path crossed the land. The town was named for the beautiful grove of large trees where travelers stopped to picnic and drink from a nearby spring. At this time, the site was a part of Monongalia County and the State of Virginia. Later, Kingwood became the seat of county government and the courthouse today is located where the grove of trees stood. The downtown section today basically follows the same mapping as the original boundaries of the town.

Many of the homes and commercial buildings were built of local stone and brick. A characteristic feature in the town's landscape is the preponderance of stone walls for retaining walls and fence walls. The stone work in the facades, foundations, and chimneys, along with these walls, bears evidence of the quarry and masons of the past.