Original Site of The Pioneer

Original site of Solon Borglum's Pioneer statue. The plaster statue of a bearded white man on horseback was created for the 1915 Panama-Pacific International Exposition. It stood at the entrance of the Court of Flowers. After the fair ended, this area was razed for redevelopment. The statue moved to Visalia, California. 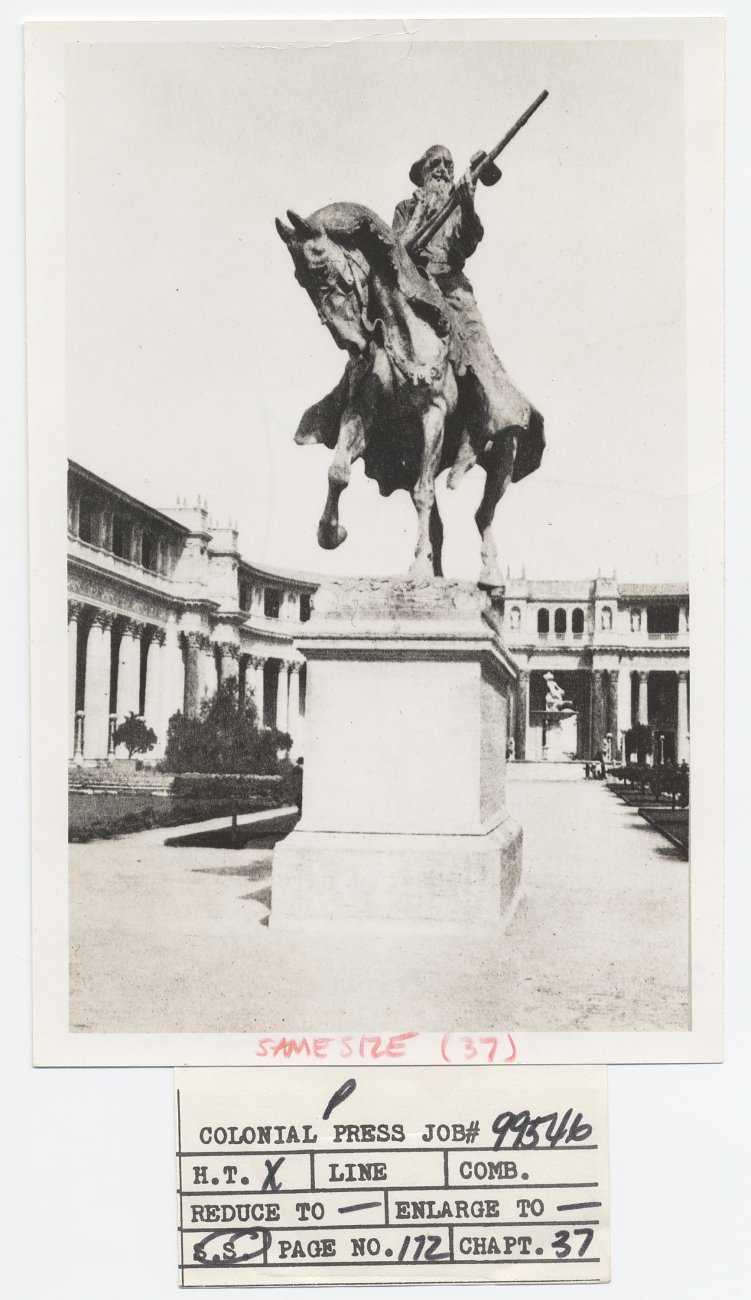 Original site of The Pioneer (also known as American Pioneer), which was sculpted by rancher-turned-sculptor Solon Borglum (1868-1922). Borglum sculpted The Pioneer for the 1915 Panama-Pacific International Exposition (PPIE) in San Francisco, California. His older brother Gutzon would later carve faces of four United States presidents into Mount Rushmore in South Dakota.

Borglum’s Pioneer was an older bearded man, evoking an American national patriarch. His dignified pose atop a prancing horse evoked the nineteenth-century equestrian monuments to military leaders.  Clad in rough Anglo-American clothing, he was armed with a rifle and ax that spoke to his work ethic, his economic aspirations, and his contributions to manifest destiny. With the rifle he would hunt to support his family, and will protect his family from both wild animals and wild Indians. With the ax he would transform untamed forests into civilized farmland and build a log cabin, that lasting symbol of white civilization. The statue merged martial pageantry and rough frontier realities. The statue at once honored white settlers for their willingness to face frontier privations – the “fine old men and women came first and made a way for us”1 – and celebrated the mastery of “civilized” white society over the “untamed” wilderness and native peoples. The pioneer’s advanced age indicated that the frontier period had passed, giving way to a more settled and civilized society.

Borglum’s Pioneer stood at the entrance to the Court of Flowers. It received a good bit of attention from fair visitors, including that of California native and United States Secretary of the Interior Franklin K. Lane. In his remarks at the fair’s opening ceremony, Lane argued that the spirit of the American pioneer lived on in twentieth-century imperialism. Lane pointed to Borglum’s Pioneer statue as embodying those characteristics of civilized white manhood. “The greatest adventure is before us, the gigantic adventure of an advancing democracy, strong, virile, and kindly, and in that advance we shall be true to the indestructible spirit of the American Pioneer.”2 Borglum’s Pioneer and its counterpart, James Earle Fraser’s End of the Trail, both spoke to the end of an era. They declared at the exposition that the frontier spirit lived, but was reborn and recast as leaders of the twentieth-century project of American imperialism.

Both fair organizers and visitors interpreted Borglum’s and Fraser’s statues as depicting the demise of indigenous peoples and coming of white civilization. One declared that “The symbolism of the ‘Pioneer’ and ‘The end of the Trail’ is … a very fine expression of the destinies of two great races.”3

After the fair closed, the Exposition Company was responsible for cleaning up the site. They sold buildings, fixtures, and equipment to the highest bidder. Because they were made of staff (plaster, faux travertine and chicken wire), the buildings and artwork did not last as long as normal stone, brick or wooden buildings. Part of the fairgrounds became Golden Gate Park. The Palace of Fine Arts was spared, and later rebuilt on the same spot. But construction workers regraded most of the site for redevelopment, including the Court of Flowers where The Pioneer stood.

Like most PPIE art, The Pioneer was made of plaster and abandoned after the fair closed. The Tulare County Board of Forestry acquired the heroic-sized sculpture for only the cost of shipping it from San Francisco to Visalia: $150. The statue was placed on a stone base in Mooney Grove Park in the late 1910s. It was listed in the National Register of Historic Places in 1977. It was severely damaged by an earthquake on May 28, 1980. While pieces of the statue are rumored to survive in private collections, only the stone base remains in Mooney Grove Park.

1. Elizabeth Gordon. What We Saw at Madame World’s Fair: A Series of Letters from the Twins at the Panama-Pacific International Exposition to Their Cousins at Home. San Francisco: Levinson, 1915. https://archive.org/details/whatwesawatmadam00gordrich p. 53.

2. Quoted in Frank Morton Todd.The Story of the Exposition: Being the Official History of the International Celebration Held at San Francisco in 1915 to Commemorate the Discovery of the Pacific Ocean and the Construction of the Panama Canal. Panama-Pacific International Exposition Company, 1921. Vol. II: 269-70. https://archive.org/details/storyofexpositio02todd

Elizabeth Gordon, What We Saw at Madame World’s Fair: A Series of Letters from the Twins at the Panama-Pacific International Exposition to Their Cousins at Home (San Francisco: Levinson, 1915), https://archive.org/details/whatwesawatmadam00gordrich, 53.