The Thomas Jefferson Memorial is a presidential memorial in Washington, D.C. dedicated to Thomas Jefferson, an American Founding Father and the third President of the United States. Built between 1939 and 1943, the Jefferson Memorial was designed by John Russell Pope in neoclassical architecture styles reminiscent of Jefferson's estate Monticello, the Rotunda at the University of Virginia, and the Pantheon in Rome. The memorial interior includes a bronze statue of Jefferson by Rudulph Evans and five of Jefferson's notable quotations. It is situated on the picturesque Tidal Basin on the National Mall, managed by the National Park Service.

View of the Jefferson Memorial from the Tidal Basin at dusk. Photo by Joe Ravi, CC-BY-SA 3.0, Wikimedia Commons. 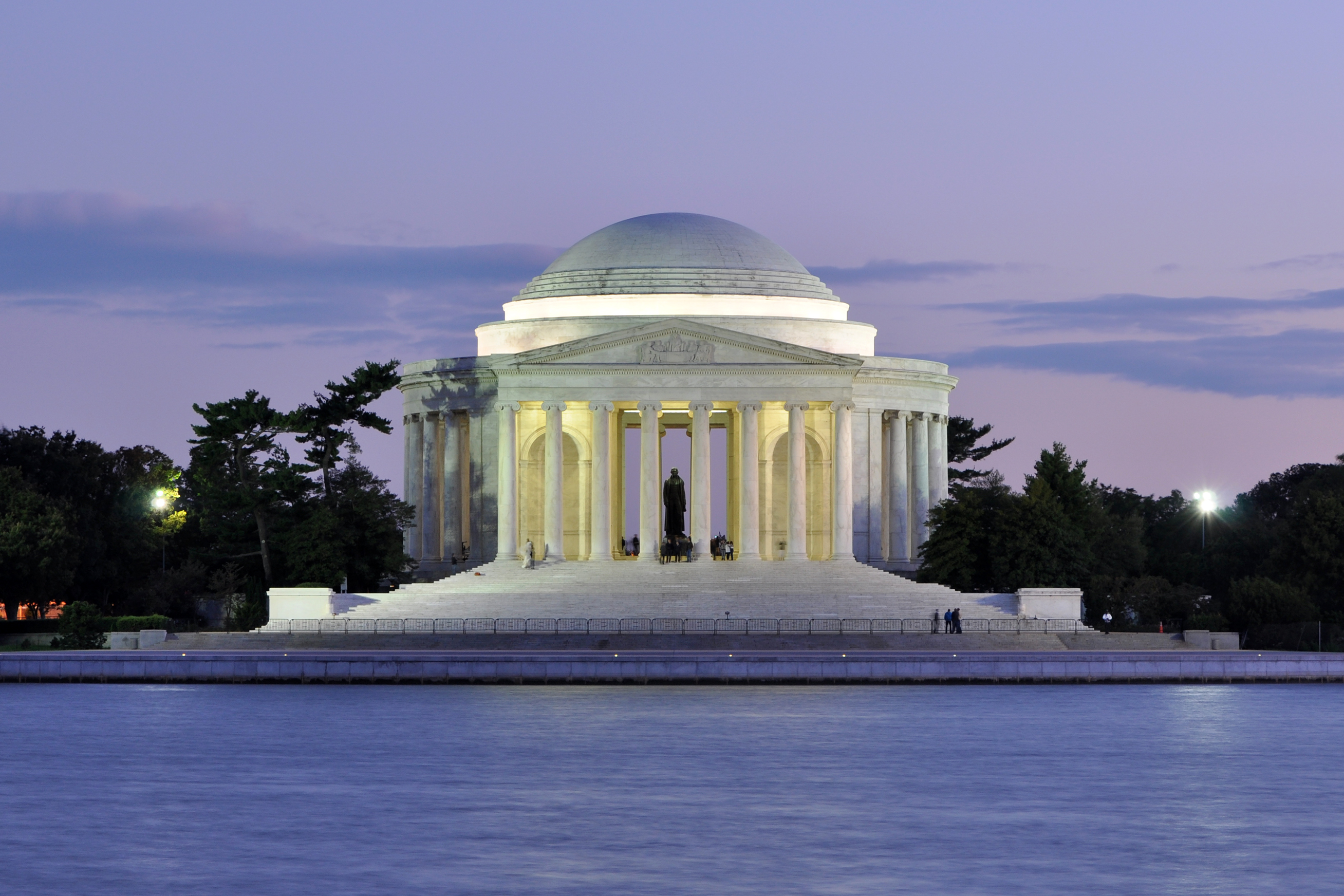 The 19-foot bronze statue of Thomas Jefferson stands by an engraving of the Declaration of Independence. Wikimedia Commons. 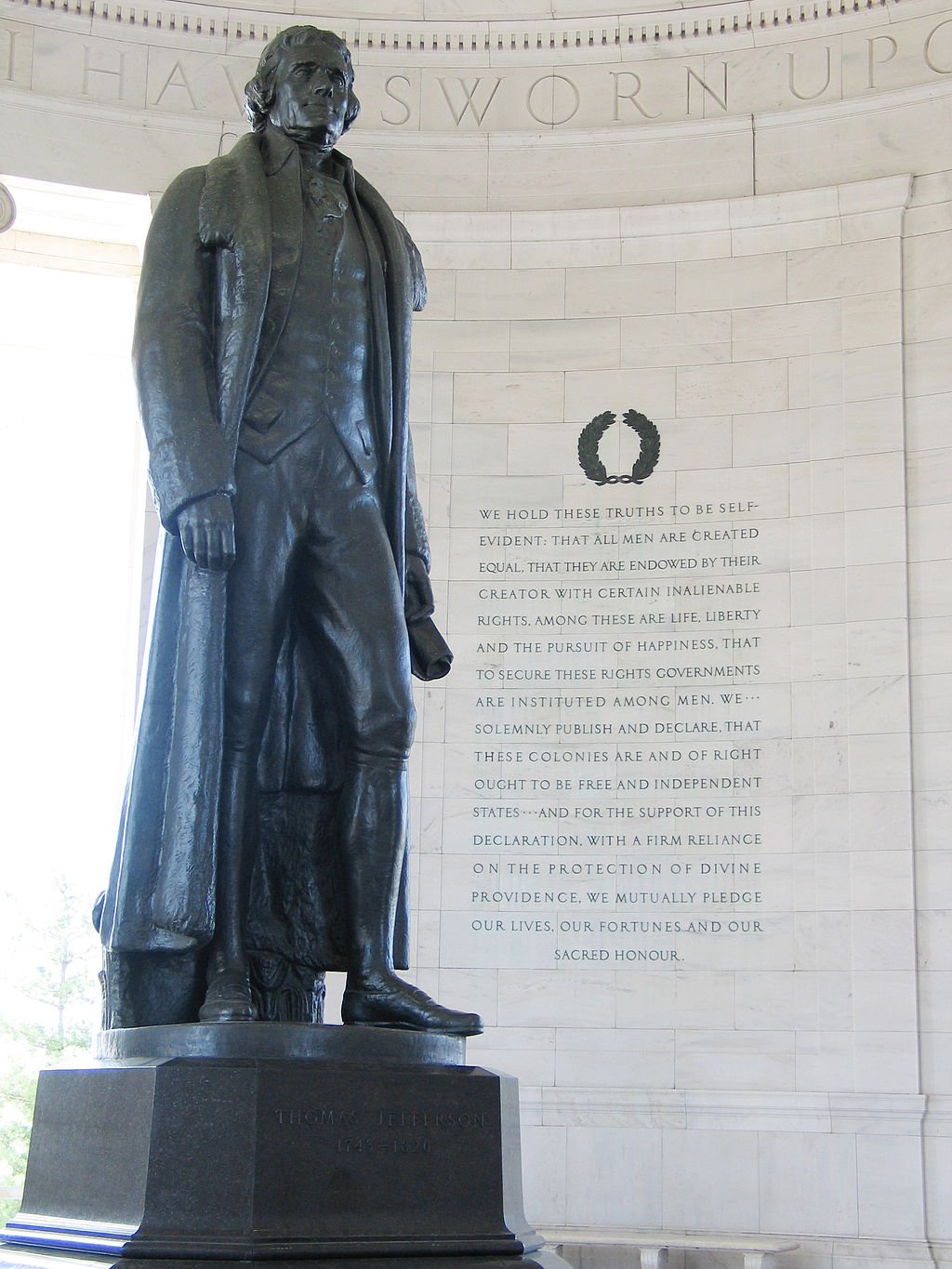 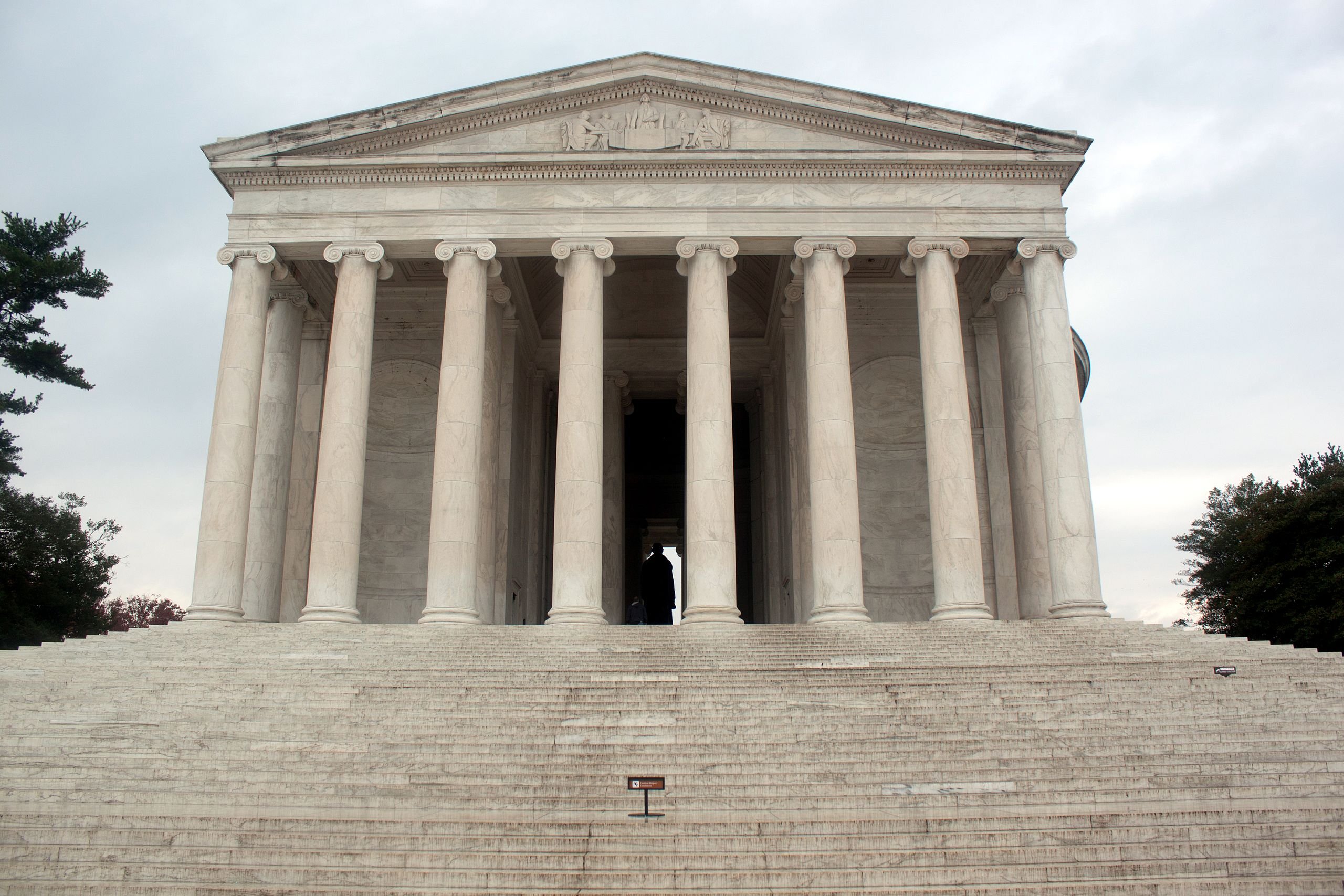 The Jefferson Memorial location was originally identified by the 1902 McMillan plan as an ideal site for a memorial, aligning directly with the Washington Monument and White House. Photo by Carol M. Highsmith, Library of Congress. 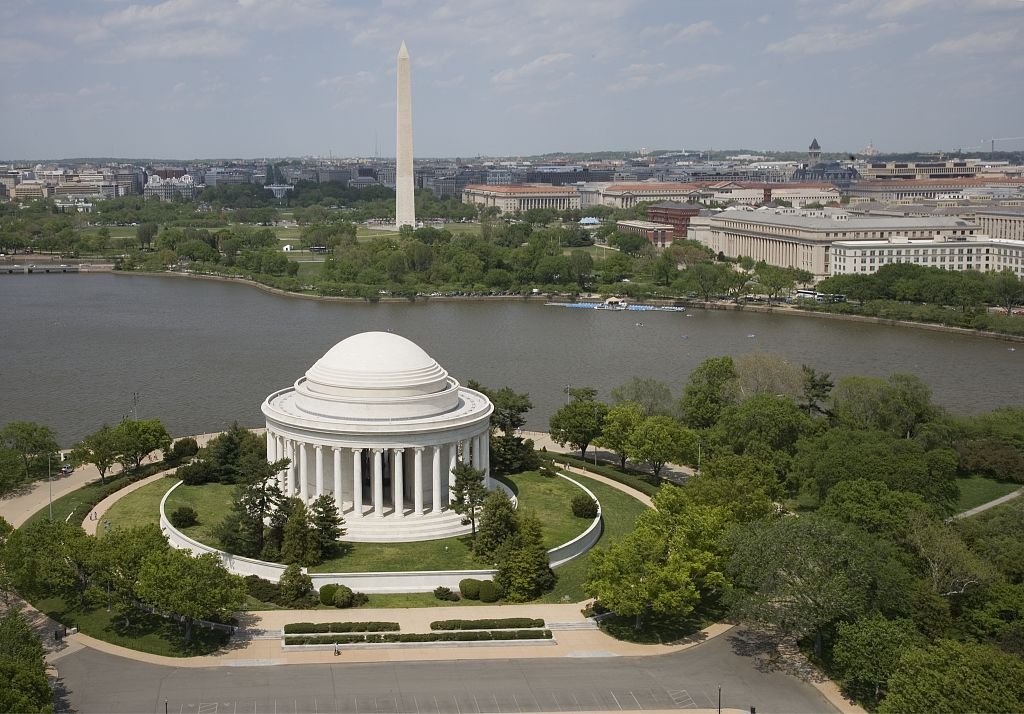 The Jefferson Memorial under construction in 1940. Photo courtesy of the National Park Service. 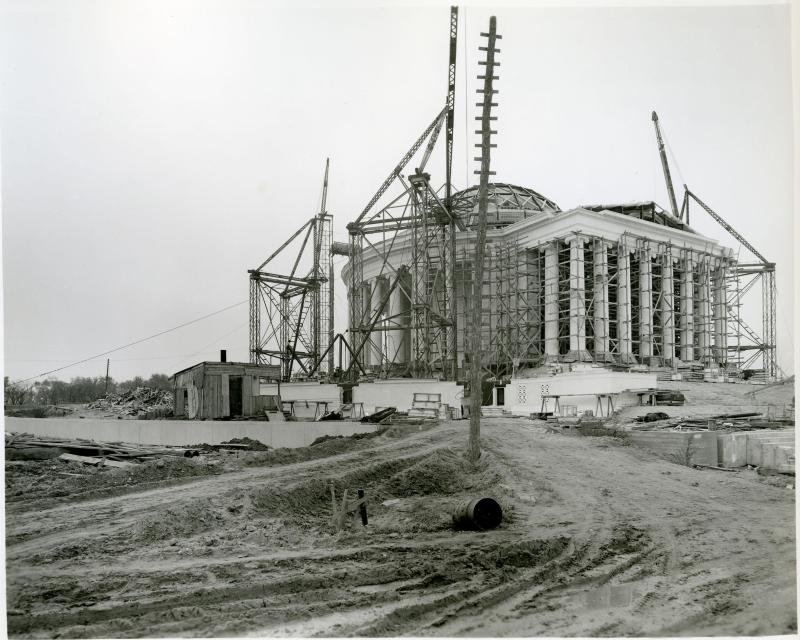 The temporary plaster statue of Jefferson was disassembled after World War II and replaced with the permanent bronze replica. Photo courtesy of the National Park Service. 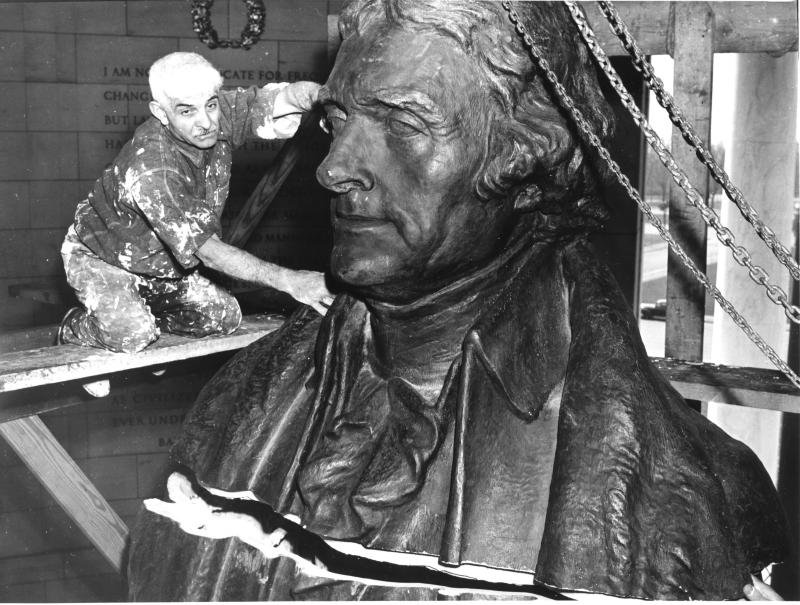 The 5-ton Jefferson statue was rolled up a ramp to the memorial. Photo courtesy of the National Park Service. 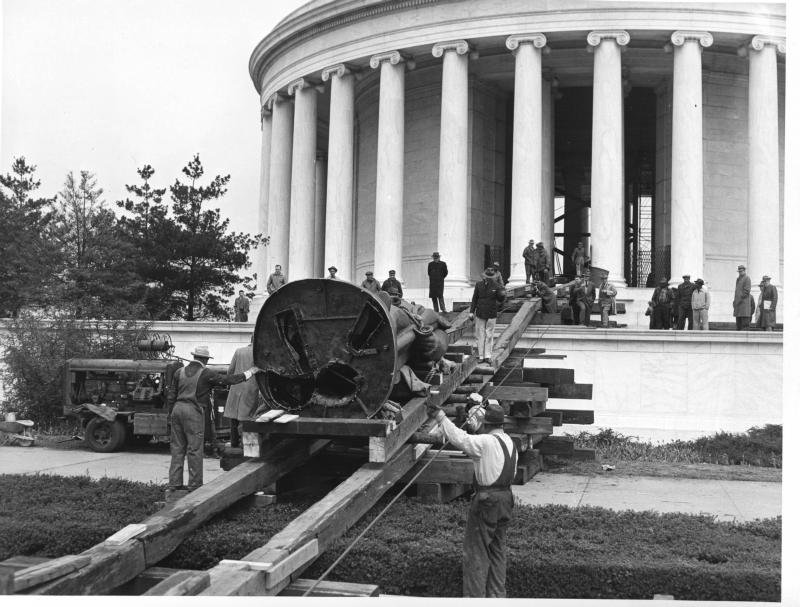 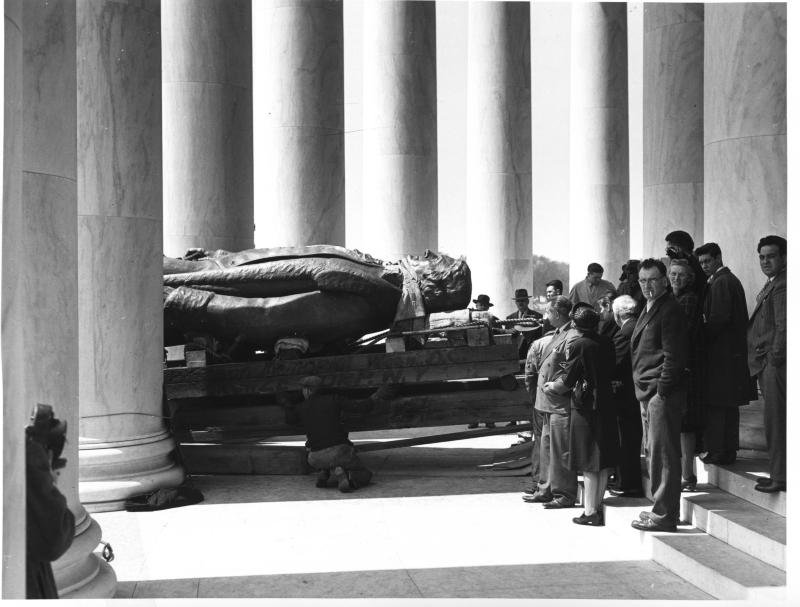 The Jefferson statue was hoisted into place atop a granite pedestal. Photo courtesy of the National Park Service. 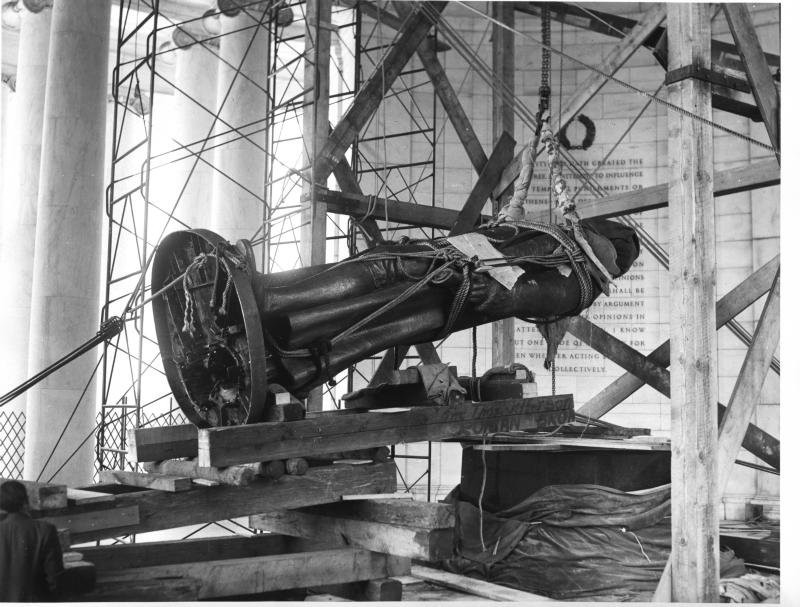 The Thomas Jefferson Memorial Commission was created by an Act of Congress in 1934, to design a memorial honoring the Founding Father and third President of the United States. This memorial was part of larger efforts throughout the twentieth century to populate the National Mall and surrounding areas with memorials and monuments to American history and culture. With the Washington Monument and Lincoln Memorial already completed, federal planners, including President Franklin D. Roosevelt and the Commission of Fine Arts, felt that a memorial to Jefferson was an appropriate next step. Additionally, the Jefferson Memorial fulfilled part of the McMillan Commission Plan of 1902, used as a guide for urban planning in Washington, D.C., which envisioned a grand memorial on the Tidal Basin on the cross axis of the White House and Washington Monument. Originally, this was a proposed site for the Theodore Roosevelt Memorial.

In 1937, the Thomas Jefferson Memorial Commission chose the Tidal Basin as the site and hired architect John Russell Pope, designer of the National Gallery of Art. Frederick Law Olmstead, Jr. oversaw landscape design, which redirected streets, established grassy areas, and removed some trees to improve the viewshed. Though it may have seemed like all the pieces were coming together, there were a number of debates over the memorial location and design. Some members of the Commission of Fine Arts and the National Capital Parks and Planning Commission disliked the Pantheon design or thought the neoclassical architecture was too similar to the Lincoln Memorial. Due to delays, President Roosevelt overrode the authority of the Commission of Fine Arts and ordered construction begin. The President laid the cornerstone on November 15, 1939, in which a number of documents were placed: copies of the Declaration of Independence, the Constitution, the 1939 Thomas Jefferson Memorial Commission Report, the "Writings of Thomas Jefferson" by Paul Leicester Ford, Jefferson's “The Life and Morals of Jesus of Nazareth,” and one edition each of four prominent Washington, D.C., newspapers. It was dedicated on April 13, 1943, the bicentennial of Jefferson's birth.

Architect John Russell Pope took inspiration for the memorial from civilizations both young and old. He borrowed designs from Jefferson’s most famous buildings, Monticello and the University of Virginia Rotunda, along with the ancient Pantheon in Rome, which Jefferson admired. These designs reflected Jefferson’s architectural tastes. Pope planned a memorial that would symbolize all the roles Jefferson played in American history—statesman, architect, drafter of the Declaration of Independence, founder of the University of Virginia, and President of the United States. Pope designed a circular, open air structure with 54 columnns. The porch, or portico, supports a triangular pediment with sculptures by Adolph A. Weinman depicting Jefferson and members of the Declaration of Independence drafting committee. Jefferson stands at the center, with (from left to right) Benjamin Franklin, John Adams, Roger Sherman, and Robert Livingston. The granite steps lead up to a floor of pink Tennessee marble, with Georgia marble on the interior walls.

The interior of the memorial contains five of Jefferson’s most famous quotations. The memorial designers often edited or combined quotes so that they would fit on the wall panels:

Rudulph Evans designed the 19-foot statue of Jefferson at the center of the memorial rotunda. His design was selected from a group of 101 proposals in a nationwide competition. From 1943 to 1945, the memorial displayed a temporary plaster statue because of wartime restrictions on metal. After the war, the plaster statue was replaced with a 5-ton bronze replica on a granite pedestal, which has stood in the Jefferson Memorial ever since. The statue depicts a middle-aged Jefferson looking toward the White House and holding the Declaration in Independence in his left hand.

Protected by the National Park Service, the Jefferson Memorial is an iconic part of the National Mall. Walkways along the Tidal Basin provide beautiful views of the Jefferson Memorial, while the vista from the memorial of Washington, D.C. and the Potomac is equally stunning. Cherry trees brought from Japan in 1912 bloom each spring around the Tidal Basin. The statue of Jefferson continues to look toward the White House and the democracy he helped found.

Savage, Kirk. Monument Wars: Washington, D.C., the National Mall, and the Transformation of the Memorial Landscape. University of California Press: 2009.

“Rudulph Evans statue of Thomas Jefferson with excerpts from the Declaration of Independence to the Right.” Photo. 2005. Wikimedia Commons. Accessed October 2017. https://en.wikipedia.org/wiki/Jefferson_Memorial#/media/File:Jefferson_Memorial_with_Declaration_preamble.jpg