The first three decades of the twentieth century involved profound changes to Chicago's Near Northside neighborhoods, as the wealthy largely vacated the region as lower-class residents moved there. The Marshall Hotel served as the permanent home to many of them, usually comprised of Southern and Eastern Europeans working as laborers and lower-paid white collar jobs. Rooming Hotels offered limited amenities, but the Marshall Hotel enjoyed modern plumbing and electricity, as well as an elevator. It stands as a monument to the changing culture, that also included an influx of anarchist and labor meetings, artists and other "free thinkers." 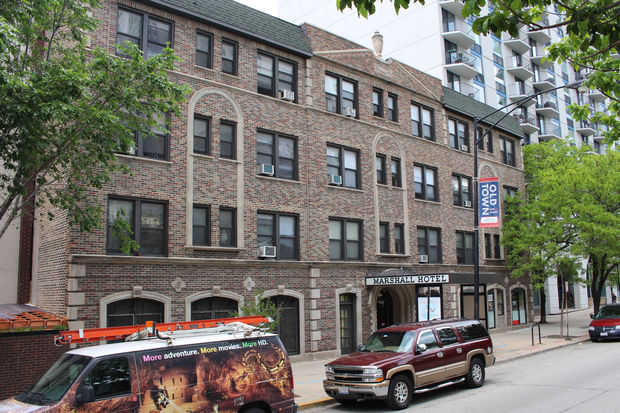 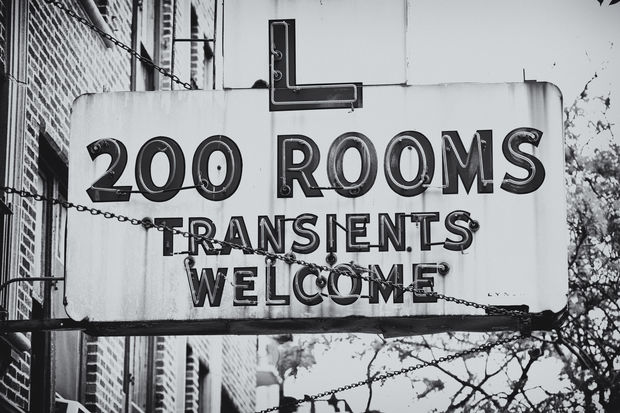 The Marshall Hotel is undergoing a renovation -- will soon offer 90 affordable apartments. Picture taken in 2018. 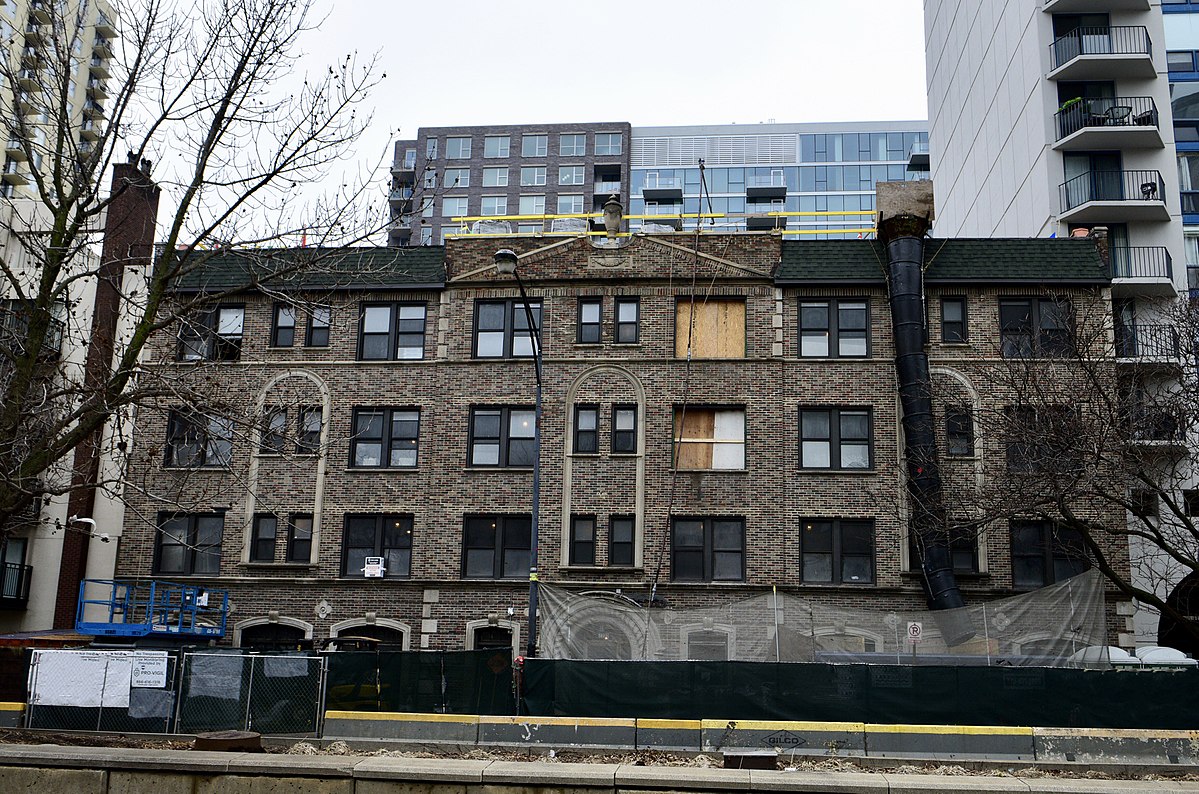 The E-shaped Marshall Hotel (opened in 1927) operated as a residential “rooming” hotel, a popular type of residential hotel constructed in Chicago primarily between 1900 and 1930. Like most rooming hotels, the Marshall Hotel catered mostly to the influx of skilled, but low paid white- and blue-collar workers moving to Chicago during the first few decades of the twentieth century, and their popularity signified a demographical change, from wealthy to those enjoying far less financial prominence.
The development of rooming houses can almost be described as the third chapter of what is now Chicago's Near Northside neighborhood. Prior to the Civil War, most of the region north of Chicago's downtown remained undeveloped. From the Civil War through about the first decade of the twentieth century, areas such as the Gold Coast and around Washington Square existed as a home to the city's wealthy residents -- mainly those of English, Irish, and German descent. However, that first decade of the new century through about the interwar period consisted of an influx of industry, laborers, and subsequently lower-income housing, which inspired the wealthy residents to vacate the area. New residents typical arrived from Eastern and Southern Europe, creating not only a change in the neighborhood's economic make-up but also its culture.  The one place unaffected (mostly) by the cultural and metamorphosis was the Gold Coast area near Lake Michigan.
In fact, the areas in the Near Noth side (outside of the Gold Coast) that once abounded in entrepreneurs became such a haven for laborers and low-paid white class workers,  that by the 1920s and 1930s, the region was known for its free thinkers, artists, and revolutionaries. Indeed, the Industrial Workers of the World (IWW), as well as members of the Proletarian Party, Revolutionary Workers' League, and other related groups met regularly in the neighboorhood, notably near what is now the Newberry Library located a few blocks south of Marshall Hotel. As the Encyclopedia of Chicago states, "Many speakers became legendary, including anarchist Lucy Parsons, 'clap doctor' Ben Reitman, labor-wars veteran John Loughman, socialist Frank Midney, feminist-Marxist Martha Biegler, Frederick Wilkesbarr (“The Sirfessor”), Herbert Shaw (the “Cosmic Kid”), the Sheridan twins (Jack and Jimmy), and one-armed “Cholly” Wendorf."

Concurrently the city’s first artists’ colony, referred to as “Towertown,” developed to the west and south of the old Water Tower (that survived the Chicago Fire) on the far north side of Chicago's downtown. The area drew many comparisons to New York’s Greenwich Village.  All told, the place once known for its wealth transitioned to a place of cultural heterogeneity, free speech, and anti-establishment speeches.
Meanwhile, in the pockets close to the Marshall Hotel, rooming hotels and lower-income housing arose quickly as numerous immigrants moved to the Near Northside. Rooming hotels rates consisted of daily, weekly, and monthly prices. Hence, both transients and permanent guests occupied the hotel. Single rooms occasionally included private baths, but most guests shared toilets, sinks, and showers. Some offered maid and laundry services, and higher-tier rooming hotels provided a meal service. However, the Marshall Hotel offered little, if any, extra comforts. but it did operate a restaurant in the building.
Because the Marshall Hotel was built towards the late stages of the rooming hotel construction boom, the building included modernized plumbing, heating and electricity, and an elevator.  The Marshall Hotel was completed in November 1927. Throughout the 1940s, the vast majority of guests considered the hotel their permanent home.
The Marshall Hotel is the only early-twentieth-century residential hotel that remains in the area. It stands as a monument to changing nature of U.S. immigration during the era, including in Chicago, as well as Chicago's  Near Northside's changing culture after the turn of the century. Moreover, the building exists as a reminder of Chicago's' broader history often tied to an ever-present class-orientated clash between the police and wealthy -- and the political far right, vs. laborers and those on the far-left of the political spectrum.

Zorbaugh, Harvey Warren. The Gold Coast and the Slum: A Sociological Study of Chicago's Near Northside. Chicago: University of Chicago Press, 1983.

The sign outside the hotel, 2009: Flickr/Thomas Hawk - found at https://www.dnainfo.com/chicago/20170601/old-town/old-marshall-hotel-on-lasalle-street-join-carling-...

The Marshall Hotel is undergoing a renovation -- will soon offer 90 affordable apartments: By Jim Roberts - Own work, CC BY-SA 4.0, https://commons.wikimedia.org/w/index.php?curid=66745074