The Savage House, also known as the Smith House, is a historic three-story townhouse that was built in downtown Nashville circa 1840. The building is the last surviving example of the Italianate townhouses that flourished in Nashville during the 19th century, and one of only two pre-Civil War buildings remaining in downtown Nashville. The exact date of the home's construction is unknown but records suggest that the home was completed in the 1840s. Over the past two centuries, the house has variously served as a rooming house, the headquarters of a Jewish social club, and the residence and office of a distinguished ophthalmologist, Dr. Giles Christopher Savage and his daughter who took over the practice. In January 1983, it was entered in the National Register of Historic Places. The building is currently home to the Standard Restaurant & Club. 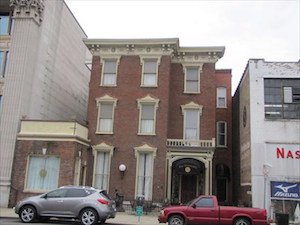 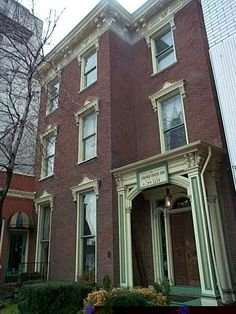 What is now the Central Business District in Nashville was once the location of many blocks of residences that represented the full range of Italianate Victorian building styles. These homes would fill entire city blocks in this area of Nashville. The structure now called the Savage House, which predates the Civil War, is the only such town house remaining in downtown. It is an excellent example of the Italianate Style.

Though the actual date of its construction is obscure (one source says it was built in the late 1840s), it definitely existed by 1959, when it was sold to Mrs. Mary E. Claiborne, who operated it as a respectable boarding house until 1881, and whose guests included many socially prominent people of the time. However, during the Civil War, Northern soldiers occupied it and used the second floor library to plan the Battle of Nashville -- a massive Union victory. The house was sold in 1884, and then leased in 1891 to a Jewish social club named The Standard Club, now called the Old Natchez Country Club. Nashville's very first bowling alley, with an ornate tin roof, was constructed beneath the ballroom.

The house was purchased in 1898 by the distinguished ophthalmologist Dr. Giles Christopher Savage, who taught at both the University of Nashville and Vanderbilt and was a pioneer in this field. The structure provided for all Dr. Savage's needs: it was a residence for him and his family, it contained the office where he received patients, and the large upper-floor room in the rear addition served as an infirmary with beds for the sick. The family had moved out by 1905, but Dr. Savage continued to practice there until his death. His youngest daughter, Kate Savage Zerfoss, followed in her father's footsteps, specializing too in ophthalmology. She graduated from Tulane University Medical School in 1922 and joined her father's practice the same year. After his passing in 1930, she continued her practice there until her retirement in 1975. Dr. Zerfoss even influenced legislation: she insisted that road crews paint white lines rather than yellow lines at the sides of roadways, knowing, because of her training, that the human eye sees white peripherally much more clearly than yellow.

The Savage House is a three-story Italianate style townhouse of dark red brick on a limestone foundation. The original house dates from the mid-nineteenth century but there are several later additions. It faces east on Eighth Avenue North, occupying almost the entire area of a 155 foot by 50 foot lot that runs through to Ninth Avenue on the west. The Eighth Avenue facade remains basically intact. To the right of the central section, in a bay recessed five feet, is the main entrance, which is sheltered by a wooden porch. The facade is punctuated regularly by rectangular, one over one, double-hung windows. Each is topped by a wooden cornice with iron consoles. The first-floor windows at the center extend from the floor to nearly the ceiling and are noticeably taller than the upper floor windows.

In 1980 the house was converted to Savage House Bed and Breakfast (upstairs), The Towne House Tea Room (main floor) and The Gas Light Lounge (the ballroom). It served in this role for a quarter century, and was the scene for several music videos by prominent artists, e.g., Allison Krause. In 2005, the house was purchased by the Smith family (hence its alternative name), who restored it extensively. Although Mr. Smith and his wife Sharon at first resided there, they eventually made room for their son Joshua, a real estate executive, to develop it into a restaurant called the Standard Club, reviving its 19th Century name. The dining rooms at the restaurant contain such Victorian trappings as a pendulum clock, gas lamps and pink china. There is a carved mantlepiece taken from the house where Andrew Jackson was married. The restaurant has since won awards and been recognized as one of the Top 5 private cigar clubs in the U.S.