The Alpha Gamma Delta Fraternity House on the campus of the University at Urbana-Champaign is a historic home built in 1928. The house represents the flourishing of the Greek Letter Society movement at the Urbana-Champaign campus of the University of Illinois in the 1920s. It was designed in the French Eclectic style by local architect George Ramey and built by local contractor Walter Villard. It continues to serve as a residence for the Alpha Gamma Delta women's fraternity. 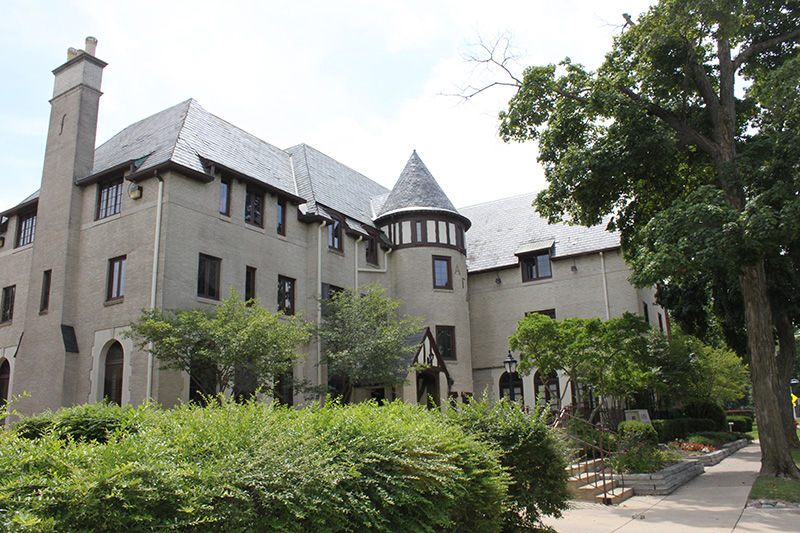 The Alpha Gamma Delta house is one of 27 chapter houses built during a second wave of construction between 1926 and 1930, following an initial wave of building from 1906 to 1917.

The French Eclectic style is based on French domestic architecture, particularly that of northern France, and is closely related to Tudor Revival style. The style became particularly popular in the United States after World War One exposed Americans to the elements of French design.

Notable exterior features include the asymmetrical plan, the central stair tower, and the grey concrete brick. On the interior, French details include the central gallery plan, the cast-plaster ornament of the ceiling, the stone fireplace in the living room, and the original wood doors.

Alpha Gamma Delta was founded in 1904 at Syracuse University by a group of female undergraduates at the suggestion of Dr. Wellesley Perry Coddington. The Sigma Chapter was established at Urbana Champaign in 1917.