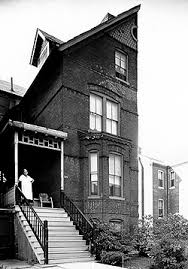 It is estimated that the Mary Church Terrell House was constructed in 1899. The exact architect of the home is unknown. However, the Mary Church Terrell House has a traditional, Victorian design. It rests on Washington's LeDroit Park and is close to Howard University. The house is a 2 1/2 story, brick home with a polygonal window that allows the house to stand out from other homes in the area.

The D.C. house was the home to civil rights activist, Mary Church Terrell. Terrell was a graduate of Oberlin College in Ohio. There she obtained both her bachelor's and her master's, making her the first African American woman to earn a college degree. She spent two years teaching at Wilburforce College before settling into Washington D.C.

Terrell's activism started in the 1890's after her friend was lynched due to the fact this his business competed with white-owned businesses. This lynching occurred in Memphis but inspired Terrell to join forces with Ida B. Wells-Barnett. The two began anti-lynching campaigns. Terrell then began to focus on the advancement of African American people through education, work, and community activism. In 1909, she became active in the NAACP.

Terrell expanded her activism to the Women's Suffrage Movement. After the passing of the 19th amendment, Terrell advocated for Black women's rights. Se became the first Black member of the American Association of University Women after she won an anti-discrimination lawsuit. This lawsuit helped pave the way for integration, especially in Washington D.C.

The Mary Church Terrell House remains standing. It became a National Historical Landmark in 1975. However, the house is privately owned and is not open to the public.