Boston’s Chinatown is one of the largest Chinese neighborhoods in the United States, the third most populous behind Manhattan and San Francisco. At the entrance to Boston’s Chinatown neighborhood, there is a large paifang gate which was given to the community by the Taiwanese government in 1982. It is an elaborate structure decorated with stone lions, Chinese characters, and lanterns. The gateway also stands before the entrance to the small, ¾ acre “Chinatown Park” – the largest open area in the dense neighborhood. 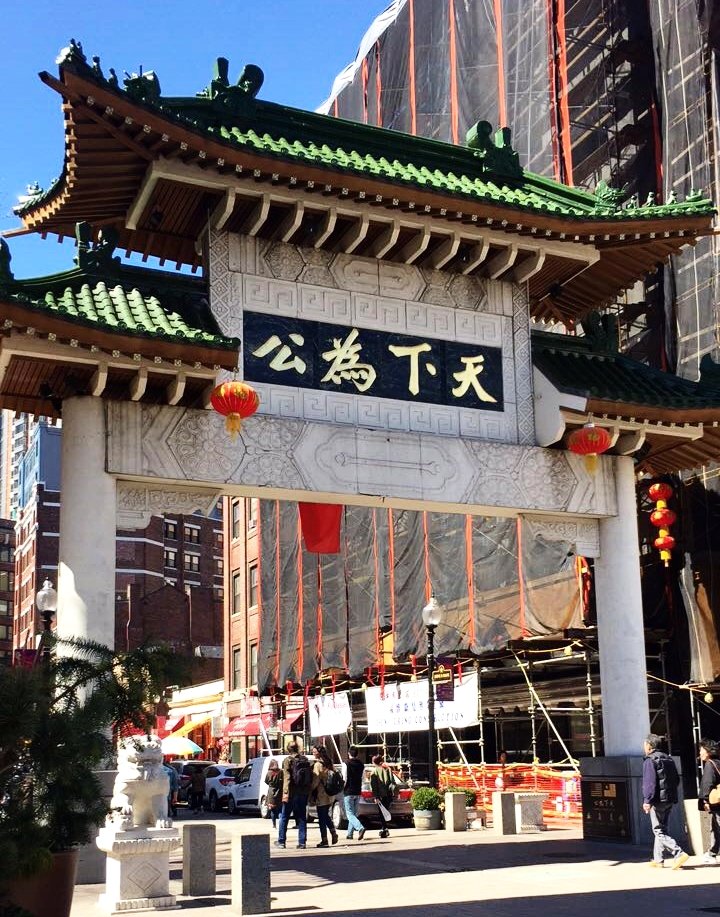 A view of some of the gate's details and the hanging lanterns. 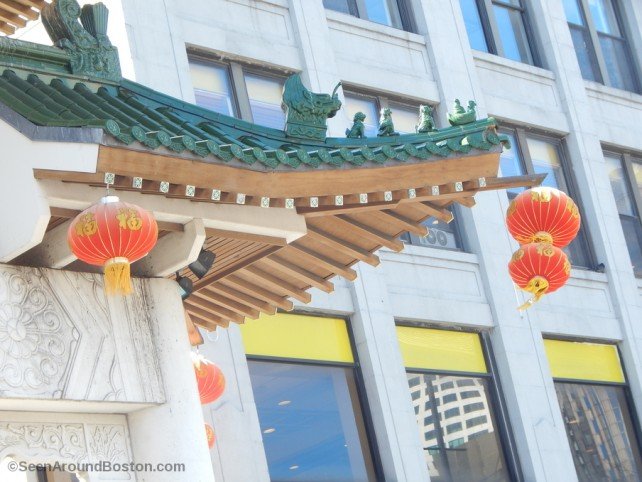 A wider view of Chinatown Park 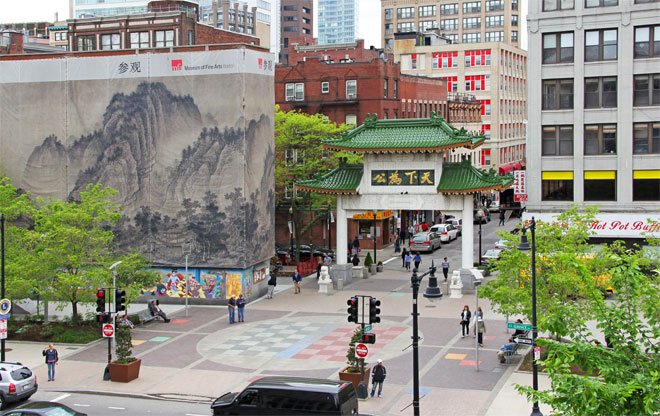 "Tian xia wei gong" or "All men are brothers."

Chinatown’s Asian population had declined over recent years due to the demand for housing in downtown Boston and subsequently, the rising rents.  However, much of their beautiful artwork remains in the neighborhood, including a towering gate at the intersection of Beach Street and Surface Road.  The paifang gate marking the entrance to Boston’s Chinatown neighborhood is not far from the Boston Common and Downtown Crossing shopping area. The Taiwanese government gifted the gate to the Chinese community of Boston in 1982. It was designed to ward off evil.  Two foo lions made of marble adorn either side of the entryway.

The gate is also decorated with various inscriptions.  Four Chinese characters are written on either side of the paifang:

“Tian xia wei gong” – on the Surface Artery side, means “All men are brothers” or “everything under the sky is for the people.”

“Li yi lian chi” – on the Beach Street side, means the 4 societal bonds of propriety, justice, integrity, and honor, or that every good person will know manner, loyalty, honesty and shame.

Pictures of these characters are shown above.

Once travelers pass through the elaborate gateway, they are standing in Chinatown Park.  The park consists of approximately 3/4 of an acre and is the largest open space in Chinatown. The community comes together in the park for large social gatherings, including celebrations, or simply to relax and bask in the sunlight on a nice day.  A portion of the park is designed as a winding pathway which curves through rich botanical gardens filled with Asian plants. The park was designed by Carol R. Johnson Associates (CRJA-IBI Group) under the direction of the Massachusetts Turnpike Authority.  Several neighborhood groups were also involved in the planning and implementation of the community park.

The area now known as Chinatown was filled in to create more space for residential housing in the city. Various ethnic groups settled on the land over time, until a Chinese community was transplanted here from San Francisco in the 1870s.  They were brought here to end a strike at the Sampson Shoe Factory and their families have remained for generations.  More laborers came to the city by the end of the century.  Many textile factories also moved into the area during this time, creating Boston’s historic garment district which remained active for the next century.  During the late twentieth century, the Big Dig transportation project moved some of the major roadways underground and the community regained some much-needed urban open space, such as Chinatown Park.