It might not seem like much today, but this tower has an interesting history. It was built in 1952 as an observation tower for a national defense program called Operation Skywatch, which was a program of the U.S. Air Force's Civilian Ground Observer Corps (GOC). The corps consisted of hundreds of thousands of civilian volunteers in all the lower 48 states who took turns watching the skies for signs of enemy aircraft. Observers' age ranged from 7 to 86. The Cairo Tower was the first officially-commissioned rural tower built. As the national radar system was being built, the tower and many others helped fill in the gaps where there was no radar. The Cairo Tower is 40 feet tall and had an enclosed room at the top with phone observers could use if they saw something. They were trained to know the difference between commercial and military aircraft. About 90 people manned the tower 24/7

The Cairo Skywatch Tower was built in 1952 as part of a national defense program where civilians kept an eye on the skies for enemy aircraft. 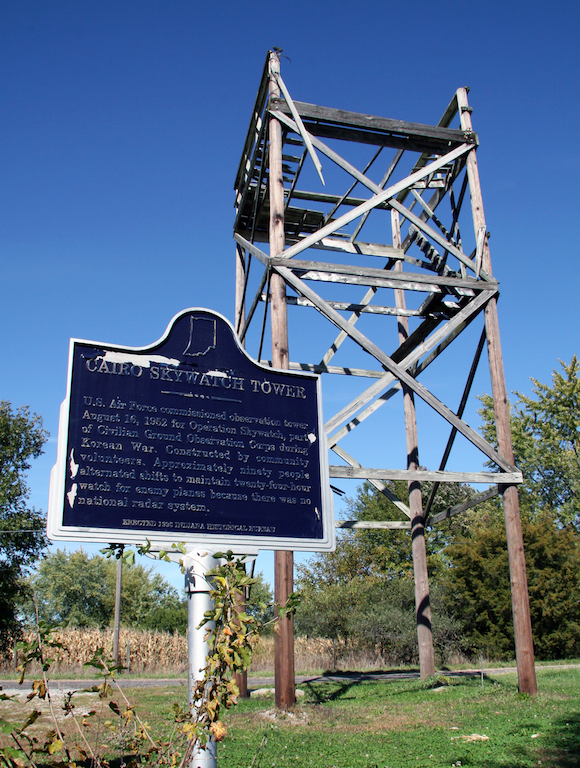 After first being established after the Japanese attack on Pearl Harbor during WWI, the GOC was revived again after the Soviet Union detonated its first nuclear bomb in 1949. It was expanded in 1952 and called Operation Skywatch. The program started to end in 1954 with the signing of the armistice ending the Korean War. It was officially terminated in January 1959. By this time, a national radar system was largely in place and civilians were no longer needed.