The Giant Steaming Tea Kettle is one of Boston’s most iconic signs. It has been used to advertise hot beverages since the 1870s. First, it hung outside the Oriental Tea Company and now it sits outside of a Starbucks coffee shop. At one point, there was even a local contest to determine how much tea the kettle could hold – the answer is inscribed on the side of the pot. One of the more ingenious components of the sign is a working steam apparatus. The tea kettle will occasionally produce steam over the sidewalk, just as though the tea was ready. 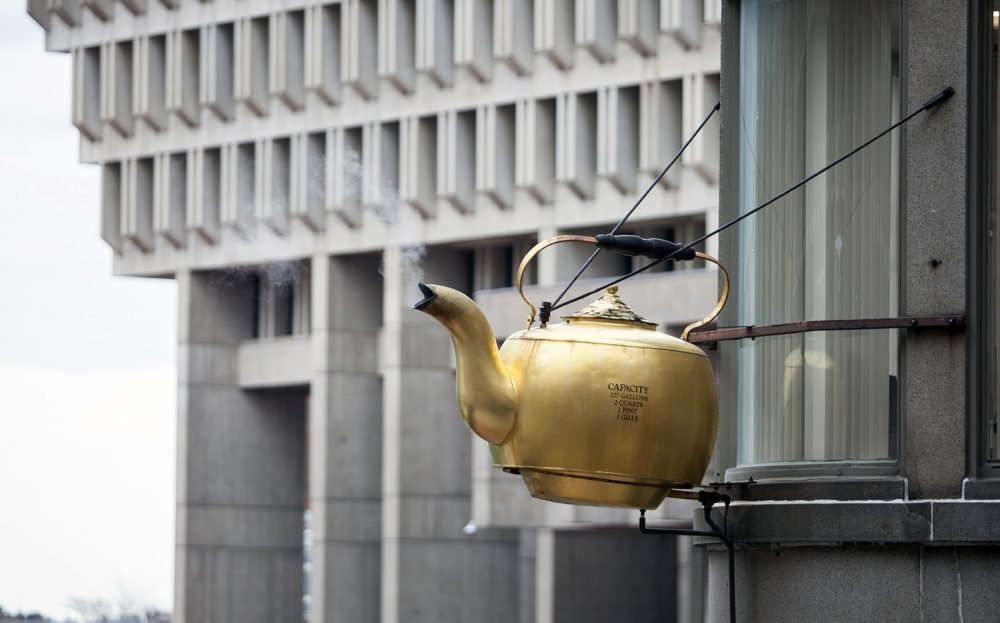 A view of the Giant Steaming Tea Kettle in 1955. 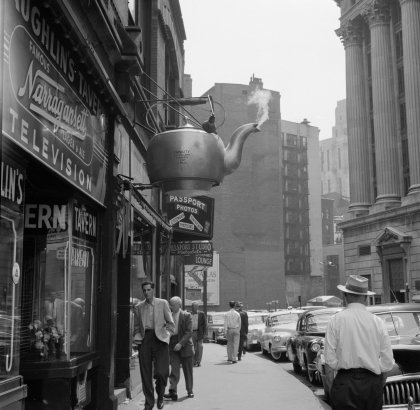 In Boston’s Government Center, there is an iconic local landmark that has been entertaining visitors for nearly 150 years. It is one of the first animated signs used in the nation.  The giant steaming tea kettle initially stood as an advertisement over the door of the Oriental Tea Company, which had a shop in the city’s old Scollay Square.  On January 1, 1875, the company held a contest to determine how much liquid the tea kettle could actually hold.  It had organized quite a spectacle for this event. Ten thousand people filled the square that day to witness it.

On the day that the measurement took place, the company hid 8 young boys and a tall man inside the kettle.  They stepped out before the official began filling it with liquid.  The Boston Sealer of Weights and Measures was present to record the tea kettle’s capacity. The final measurement was later inscribed on one side of the kettle: “227 gallons, 2 quarts, 1 pint, 3 gills." (A gill is an antiquated form of liquid measurement, used to mean the equivalent of one-half cup.)

Organizers sorted through over 13,000 guesses submitted prior to the event.  They narrowed down the guesses to find eight winners – they were all within 3 gills of the final answer.  Each of them received one-eighth (about 5 pounds) of a chest of tea as their prize. This publicity stunt gave the tea kettle its local fame.

The tea kettle was created by a company called Hicks & Badger.  It was an obvious choice for a sign used to advertise a tea company.  At the time, Boston was a city full of immigrants who spoke many different languages.  A giant teapot accurately represented the company’s wares across all language barriers.  The sign spent many years outside the Oriental Tea Company.  Later, it moved from one location to another as buildings were torn down, finally ending up outside a Starbucks coffeehouse on Court Street.  It is interesting that the popularity of the advertising tool outlived the Oriental Tea Company by many years.

In 2016, the tea kettle sustained some damage and was removed temporarily for repairs. A truck had hit a pole nearby while working on a construction site and although it was never confirmed, it is alleged that the accident caused a significant dent in the side of the kettle.  The kettle was returned to its hinges in October 2016.

Toussaint, Kristin. The famous Steaming Tea Kettle on Court Street was taken down for repairs. Boston.com. May 09, 2016. Accessed May 20, 2018. https://www.boston.com/culture/lifestyle/2016/05/09/famous-steaming-tea-kettle-court-street-taken-re....

N/A. The kettle is public art adorning the outside of a building.