Blue Licks State Park became Kentucky's 50th state park on January 25, 1927. The park was originally made up of 32 acres that was donated from local citizens. The Park is to remember the battle of Blue Licks and the nearly 70 Kentuckians that were killed. Kentucky lost some of its most prominent leader including the Todd, Trigg and Daniel Boone's son Israel. In 1928 on the 136th anniversary of the battle, the park added a monument inscribed with the names of those who died on August 19, 1782. Since then the park has grown to over 148 acres adding over 50 campsites with water and electricity. The campground is open from April to October 31.The park also has 32 rooms with full amenities with a limited number of rooms for pets. The park has several amenities and things to do including boating with free access to the Licking River, hiking, miniature golf, flower viewing, picnicking, a playground and a swimming pool. At the park you can also see one of Kentucky's state endangered species plants the Goldenrod. As well as several museums, monuments and a reenactment showing of the Blue Lick Battle every year. 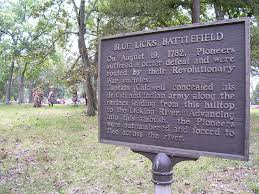 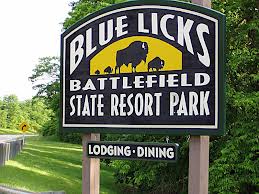 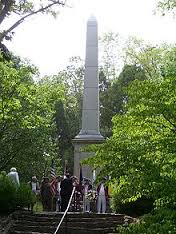 The Revolutionary War continued in the remote western territory long after the surrender of Lord Cornwallis and the British Army at Yorktown. The frontier had experienced fighting since 1777 when George Rogers Clark established the Fort at the Falls of the Ohio (now Louisville, Kentucky).

BACKGROUND OF THE WESTERN THEATRE

The British, allied with the Indians, controlled the territory north of the Ohio river with fortifications at Fort Detroit (now Detroit, Michigan), Vincennes (now Vincennes, Indiana), and at Kaskaskia and Cahokia (both populated by French settlers) located along the Mississippi River in what is now Illinois. South of the Ohio River, settlers were arriving on the western side of the mountains mostly through the Cumberland Gap, located in what is now southeastern Kentucky.

Daniel Boone is a legendary figure throughout the history of early
Kentucky He was an active participant in the Battle of Blue Licks.

The fighting was not conducted in the conventional regimented formations of the Eastern Theatre, but more accurately described as Indian fighting. The British and Canadians would provide the leadership and direct the major assaults, and the Indian allies would supply the troops and in addition provide smaller raiding parties under their own leadership. The Patriots were Militiamen comprised of English (71%), Scots-Irish (14%), and other nationalities (15%); the entire frontiersmen were expected to fight. Many raids resulted in battles; deadly skirmishes and atrocities were conducted back and forth across the Ohio River by both sides. Kentucky was first referred to as "Kentucky County," part of Virginia. In 1780 it was divided into three large Virginia counties: Lincoln, Fayette, and Jefferson.

Among the battles, Lieutenant Colonel George Rogers Clark captured Sackville and Lt. Governor Henry Hamilton, known as the hair-buyer, in 1779 at Vincennes (now Vincennes, Indiana). The raids south of the Ohio River included atrocities such as the destruction of Ruddle and Martin Stations in 1780. Under the direction of British Captain Bird and Indian Agent Alexander McKee, an army that included 200 Canadian Rangers, Tories, about 600 Indians, and fortified with several cannons, set out to attack Fort Nelson at what is now Louisville, Kentucky. The Indians refused to attack the larger fort commanded by LTC George Rogers Clark (called "Long Knife" by the Indians), and the strategy was changed to attack Ruddle and Martin Stations located in what is now central Kentucky. The cannons forced the surrender of Ruddle Station. As soon as the gates were opened the Indians rushed in seizing people, claiming them as prisoners; the old and sickly were killed while babies were pulled from their mothers' arms, and bashed and thrown into fires. The prisoners were divided and required to carry the plunder while the Indians rode their stolen horses. Sadly, Martin Station, located a few miles away, suffered the same fate. Approximately 27 were killed, and 470 captives of the British and Indians began a death march to Fort Detroit. Since a bounty of $5.00 was paid for each scalp or prisoner, it made little difference if they arrived alive or as a scalp.

In 1782 British and Indian allies amassed a force in the wilderness territory (now Ohio) and set out to attack Ft. Henry in Wheeling, Virginia (now West Virginia). The force was comprised of 150 British Rangers under the command of Capt. William Caldwell, along with approximately 1,100 Ohio Indian Nation Allies, supervised by Capt. Alexander McKee and Simon Girty, a British Indian Liaison Officer known for championing the Indians' perspective. The expedition was called off after it was reported that LTC George Rogers Clark was preparing to once more mount an offensive into the Ohio Indian Nation Territory, which is now in the state of Ohio. Most of the British and a large number of Indians returned home.

The more zealous members stayed and formed a smaller force comprised of about 50 British Rangers, commanded by Capt. William Caldwell, supported by Simon Girty and Alexander McKee, who supervised the approximately 300 remaining Indian allies. They decided to cross the Ohio River and attack in Fayette County, Virginia. Attacking Louisville was considered, and once more the Indian Allies were reluctant because of the reputation of LTC Clark. Instead it was decided to cross the Ohio River at the present location of Cincinnati, Ohio, and follow the Licking River into central Kentucky.

The Army proceeded south arriving at the abandoned Ruddle Station. At this point possibly a strategy was formed to attack a station in central Kentucky, knowing a retaliatory force would be raised and a withdrawal would be pursued, setting up the possibility of an ambush and destruction of a much larger force and establishing an encounter that was to their advantage.

The decision was made, and Bryan's Station, located in the northeastern section of the most populated part of Kentucky, was chosen. On August 15, 1782, when the Army arrived in the evening, approximately 44 militiamen defended the station, and two express riders rode toward Lexington for reinforcements. Initially the invaders remained hidden; however, their presence was known, giving rise to one of Kentucky's most remembered folklore stories. The forts in Kentucky were normally dry, without a water source, since farm animals were often quartered inside at night to keep marauding Indians from stealing them. 0n the morning of August 16, it was decided a contingent of pioneer ladies led by Polly Hawkins Craig would fetch water from a spring located a short distance from the fort. Did the woman really fetch the water and return safely, against an army that was partially commanded by Capt. McKee, who had permitted earlier the Indian atrocities at Ruddle and Martin Stations? And, wouldn't the defenders have capitulated if the women were captured? Historians can only speculate. The author of this article is a direct descendent of Polly Hawkins Craig; her son John was the temporary commander of the fort during the siege.

Eventually Caldwell's force showed themselves, but never mounted a serious assault. Toward the middle of the day of the 16th a relief company arrived from Lexington. After a brief skirmish with the Indians, 17 rode into the fort and the remainder withdrew to Lexington for additional reinforcements. The skirmish at the station continued, resulting in the deaths of five militiamen. Shortly after sunrise on the 17th, Caldwell's Army withdrew, after destroying crops and the buildings located outside the station, and returned to Ruddle Station. They proceeded north along a hunter's path.

On the morning of August 18, 182 mostly mounted Militiamen reinforcements arrived at Bryan's Station. Colonel John Todd, from Fayette County, was the ranking officer of those assembled. LTC Stephen Trigg, from Lincoln County, commanded 130 men, and LTC Daniel Boone, from Fayette County, commanded 50 men. A large contingent was expected to arrive a few days later from St. Asaph's in Lincoln County under the command of Col. Benjamin Logan. The last troops arrived by mid­morning, and the mounted militia began the pursuit of Caldwell's forces, passing Ruddle Station about halfway to Lower Blue Lick. There are two licks located close together - a smaller lick on the south side of the Licking River and a larger one on the north side.

By evening of August 18, Caldwell's Army had camped at the Licks. By the next morning, August 19th, they knew the location of Col. Todd's forces - only a few miles south of the lick. To meet the Kentucky militia, Caldwell placed his men on both sides of a ridge, about 3,500 feet north of the Licking River Ford. The ford itself was a very narrow and shallow crossing located at the bottom of an A-shaped bend in the Licking River. The position was ideal, allowing a withdrawal route for the defenders and cover (tree line), but not for attackers, who had the river behind them and open fields to cross.

What happened next is the subject of a great deal of speculation. The account that best described the situation was by Capt. Gabriel Madison:

"We halted till sunup on the 19th within four miles of the Lick. Then marching in three parallel lines to the heights opposite the Blue Lick, where, on discovering a party of the Enemy...No gen'l order given after this period, the spies, found the Enemy...had gone on, Major Megary crossed with his division, after which Colo Trigg with his, and Col. Boon following..."

Another account, less likely but more popular as another one of Kentucky's folklore stories, had the Militia Army stopped on the south side of the Licking River to discuss their strategy when Maj. McGary issued his challenge and the troops followed. McGary spurred his horse into the water, calling out:

"All who are damned cowards follow me, and I will show you the Indians."

By both accounts the Virginians followed Major McGary, fording the river at the narrow ford then advancing to within 200 yards of the tree line before waiting to attack Caldwell's forces. Daniel Boone and Capt. Patterson's Fayette County troops moved to the left, with Trigg's Lincoln county troops under Major McGary and Major Harlin to the middle of the line, with Capt. Bulger on the right. The line covering 600 yards consisted of 130 men, since every tenth man secured the horses. The river would prevent a quick withdrawal.

The attack started around 7:30 to 8:00 AM with a mounted assault under Harlin. About the same time, Boone and Capt. Patterson's forces advanced. While Boone and Patterson were successfully pushing the enemy back, Harlin's mounted infantry suffered heavily. The Indians flanked Bulger's troops with an early casualty of Lt. Col. Trigg, followed by Col. Todd and Capt. Bulger. Bulger's men were outflanked, and the line started retreating from right to left. Panic spread down the line with McGary's ordering a retreat. He then rode to warn Boone, who was advancing in the woods.

After McGary's warning, Boone realized the Indians now were in the rear of his position. Daniel Boone ordered his men and his son Israel to mount up and break through the Indians. Capt. Peterson, who was wounded in a previous battle, returned toward the ford leaving Boone in charge. Aaron Reynolds insisted Capt. Peterson take his horse and escape. Israel waited for his father and was mortally wounded; Daniel had to leave his son on the battlefield. The retreat across the open field and the ford of the Licking river resulted in even more casualties.

In fifteen minutes the battle was over. Seventy-seven Virginians were killed, with many of the men being killed after being captured, resulting in only 11 captives being taken to Fort Detroit. Colonel Logan's relief force buried the dead. Indian raids continued south of the Ohio river, and on November 4, George Rogers Clark led an army of 1,128 militia troops across the Ohio to attack the Ohio Indian Nation. Included were Col. Benjamin Logan and now full Colonel Daniel Boone.