Pemberton Hall is an outstanding example of eighteenth century Eastern Shore regional architecture. This gambrel-roofed brick structure was built by Isaac and Anne Handy in 1741. The building has been fully restored to its eighteenth century appearance with furnishings that are based on three eighteenth century probate inventories taken on the plantation. 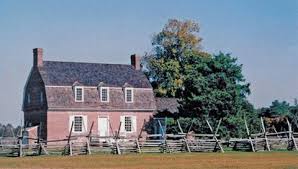 After the plantation house became derelict and threatened with destruction, the Pemberton Hall Foundation, Inc. was formed to restore and interpret this important vestige of our Chesapeake Bay regional heritage. The Hall and two acres are owned and maintained by the Foundation. Pemberton Hall is surrounded by 262-acre Pemberton Historical Park, which maintains three of the original plantation boundaries of 1750.
Pemberton Hall Plantation was created in this relatively undeveloped landscape. After purchasing the property from Joseph Pemberton in 1726, Isaac Handy developed the plantation. The site’s wharf and rolling road became a hub for commerce in the region.

Public tours by appointment only