This Visitor Center at Antietam National Battlefield offers exhibits, programs, a theatre, an observation room, and museum store for visitors looking to learn more about the Battle of Antietam, a key battle in the American Civil War. The Visitor Center was constructed in 1962 as part of Mission 66, a ten-year campaign to “modernize, enlarge, and reinvent” the National Park Service in time for its 50th anniversary.

The Visitor Center at Antietam opened in 1962. It was constructed as part of the National Park Service's Mission 66 campaign, which celebrated their 50th anniversary in 1966. 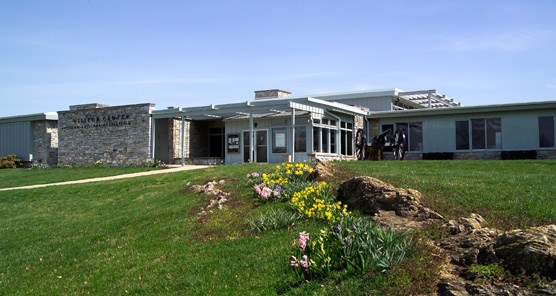 Like over 100 visitor centers constructed in the Mission 66 era, Antietam's Visitor Center is an example of Modernist architecture, which uses simple lines, forms, and materials to create a practical space. Wikimedia Commons. 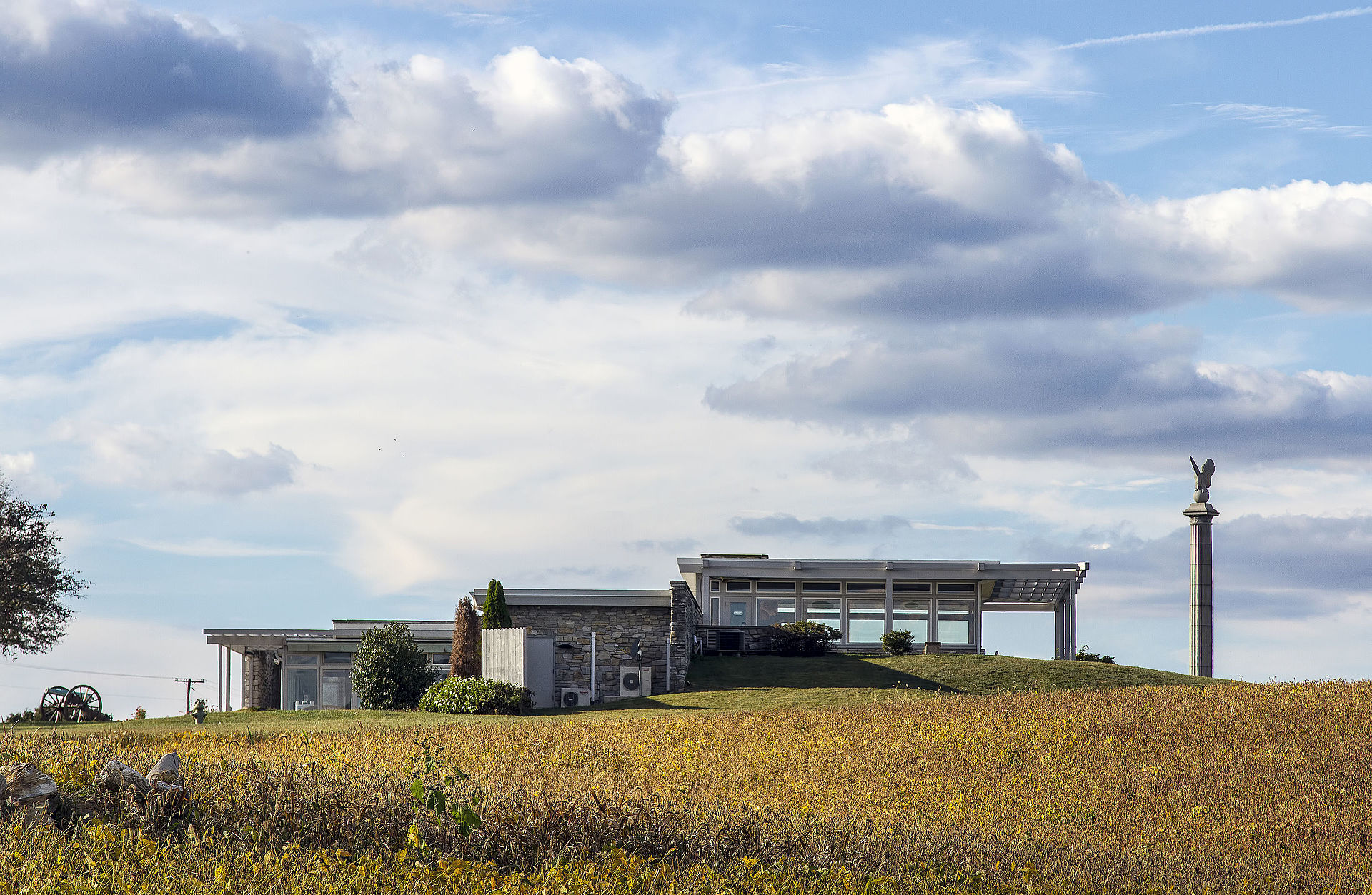 In the postwar era, more Americans than ever before were driving inexpensive cars on new highways and discovering the country's National Parks. This image shows traffic backing up at Burnside Bridge. National Park Service photo. 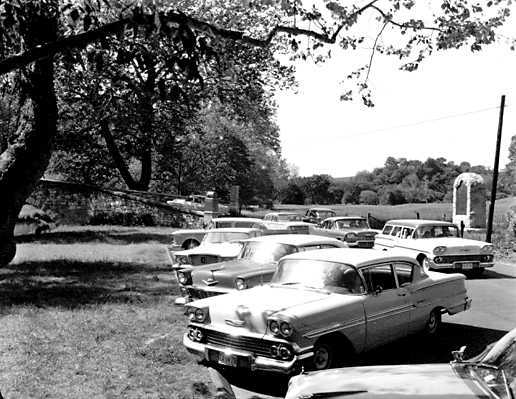 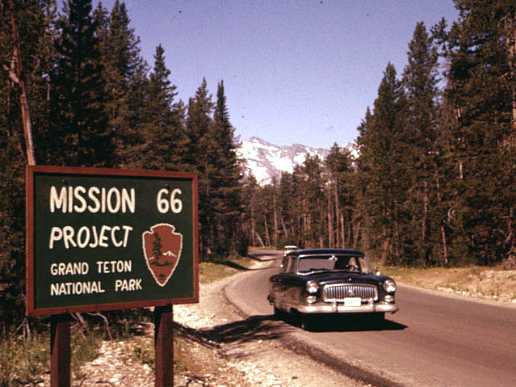 The Visitor Center at Antietam National Battlefield not only interprets the history of an important event in the Civil War, but also has a story of its own to tell. Long before construction of the Visitor Center in 1962, preservation efforts began to protect the battlefield, which remained relatively unchanged from the days of the Civil War. On September 17, 1862, Union forces clashed with Confederates attempting their first invasion of the North. The Battle of Antietam was the most devastating one-day battle in American history, resulting in 23,000 casualties. While neither side could claim victory, the battle forced Confederate General Robert E. Lee to retreat to Virginia. President Abraham Lincoln used this moment to announce the Preliminary Emancipation Proclamation. On August 30, 1890, the United States War Department designated Antietam as a National Battlefield. In 1933, the battlefield was transferred to the Department of the Interior and administered by the National Park Service.

Following World War II, the National Parks of the United States were busier than ever. Amid postwar prosperity, many Americans purchased cars and used their leisure time to travel the country’s new highway systems. These highways led travelers to National Parks, many of which were previously remote or only accessible by rail. When visitation to National Parks soared from 6 million in 1942 to 30 million in 1950, it became clear that Park infrastructure, including the countless projects funded by the New Deal less than twenty years earlier, was not equipped to handle this jump in visitors. In response, the National Park Service instituted Mission 66, a ten-year plan to improve Park infrastructure in time for their 50th anniversary. From 1955 to 1966, the federal government funneled more than $1 billion to the National Park Service to rehabilitate existing facilities and construct new roads, buildings, picnic areas, trails, and visitors centers, including the one at Antietam National Battlefield.

The Visitor Center at Antietam was one of more than 100 new visitor centers constructed as part of Mission 66. These visitor centers provided both park rangers and the public with a centralized hub for Park activities. Visitors could be welcomed, gather maps, see artifacts and exhibits, shop for souvenirs, watch an educational film, hear ranger talks, or meet rangers for interpretive tours of the park. Critics of Mission 66 argued that these building projects conflicted with the National Park Service's mission by contributing to development and encouraging more traffic, a dilemma that crowded parks today are facing. Antietam's Visitor Center opened in 1962 and replaced the cramped museum in the Lodge of the National Cemetery. Strategically located in a place that provided sweeping views of the battlefield, the Visitor Center was considered the “centerpiece of the park’s Mission 66 efforts.”1 Additional projects at Antietam under Mission 66 included expanding the park from 195 acres to 790 acres, building new roads, and restoring historic structures.

Visitor centers built in the Mission 66 era share a history along with an architectural style known as “Park Service Modern.” Modernism is an architectural style developed in the 1930s that continued into the mid-twentieth century. The most well-known Modernist is Frank Lloyd Wright, designer of Fallingwater. According to the National Trust for Historic Preservation, Modernist buildings emphasize “form rather than ornament; structure and materials rather than picturesque constructions; and the rational and efficient use of space.”2 Mission 66 visitor centers are imbued these characteristics, contrasting rustic buildings constructed in the New Deal era. Antietam’s Visitor Center was designed by architect William Cramp Scheetz, Jr., a graduate of the University of Pennsylvania and Navy veteran of World War II. The Visitor Center uses straight, horizontal lines and a flat roof to complement the rolling hills of the natural landscape. One unique space in the Visitor Center is the observation room, which provides a 270-degree view of the battlefield and surrounding farmlands. Its use of Modernist architecture within the larger story of Mission 66 makes the Visitor Center significant to the history of both Antietam and the National Park Service.

Today, the Visitor Center at Antietam continues to welcome history enthusiasts from around the world. Though the Visitor Center and battlefield tell the story of the Civil War, the building itself is a reminder of the National Park Service’s efforts to connect the public to the past. Visitor centers like the one at Antietam, past the fifty-year mark that traditionally deems buildings worthy of historical distinction, are now considered an important part of the National Park Service’s own story.