Built in 1890, the old Larimore City Hall is the first brick building and the oldest extant civic structure in the city. In addition to serving as the Larimore's first city hall, it also served for many years as the town opera house. It was placed on the National Register of Historic Places in 1990, and it has served as the community museum since the 1960s. It has several exhibits and artifacts that are important to explaining the area's history.

Old Larimore City Hall in the evening. This image shows the east (front) and north sides of the building. Evidence of the removed large Colonial Style fanlight window can be seen on the second floor of the north side. 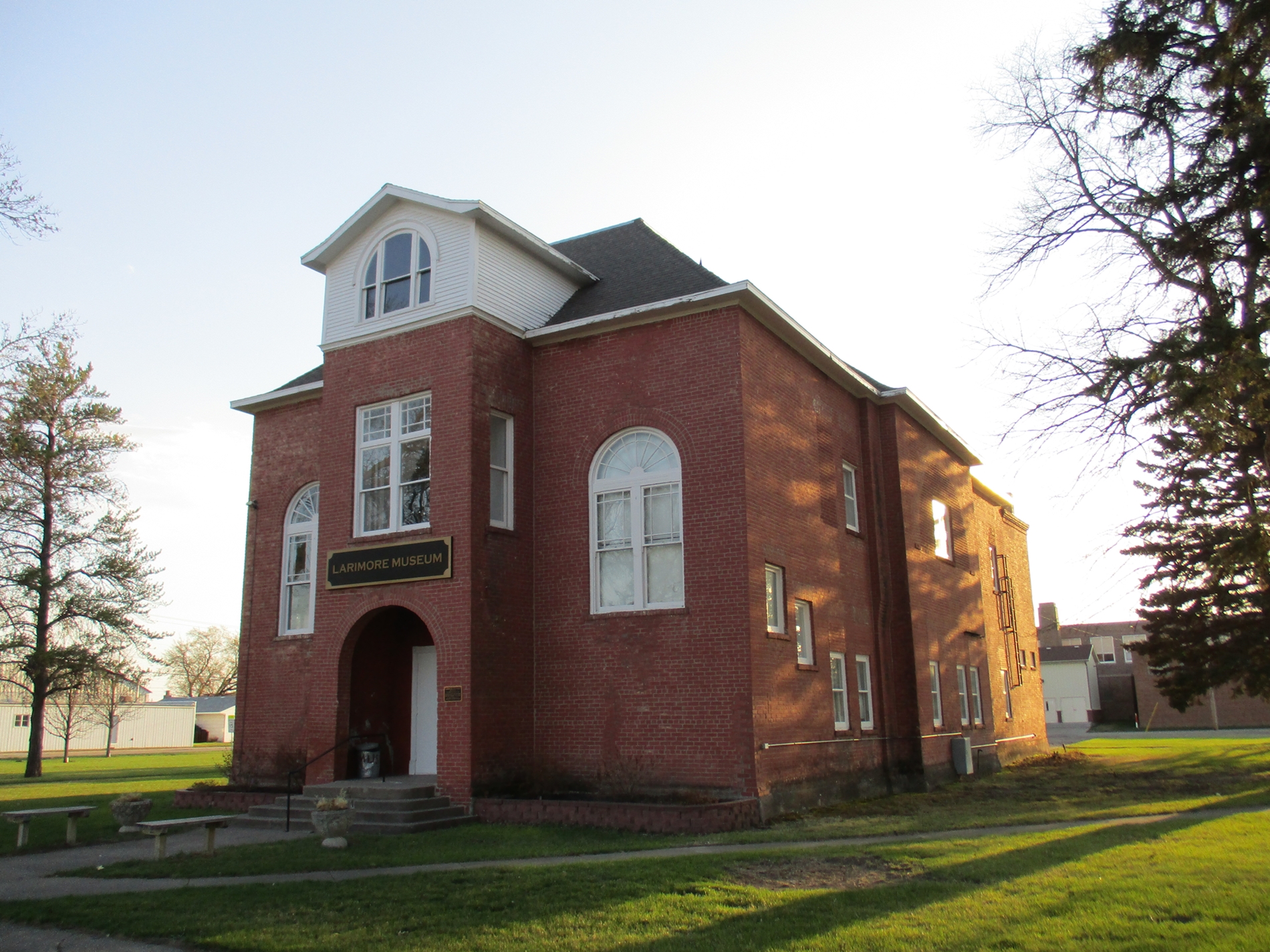 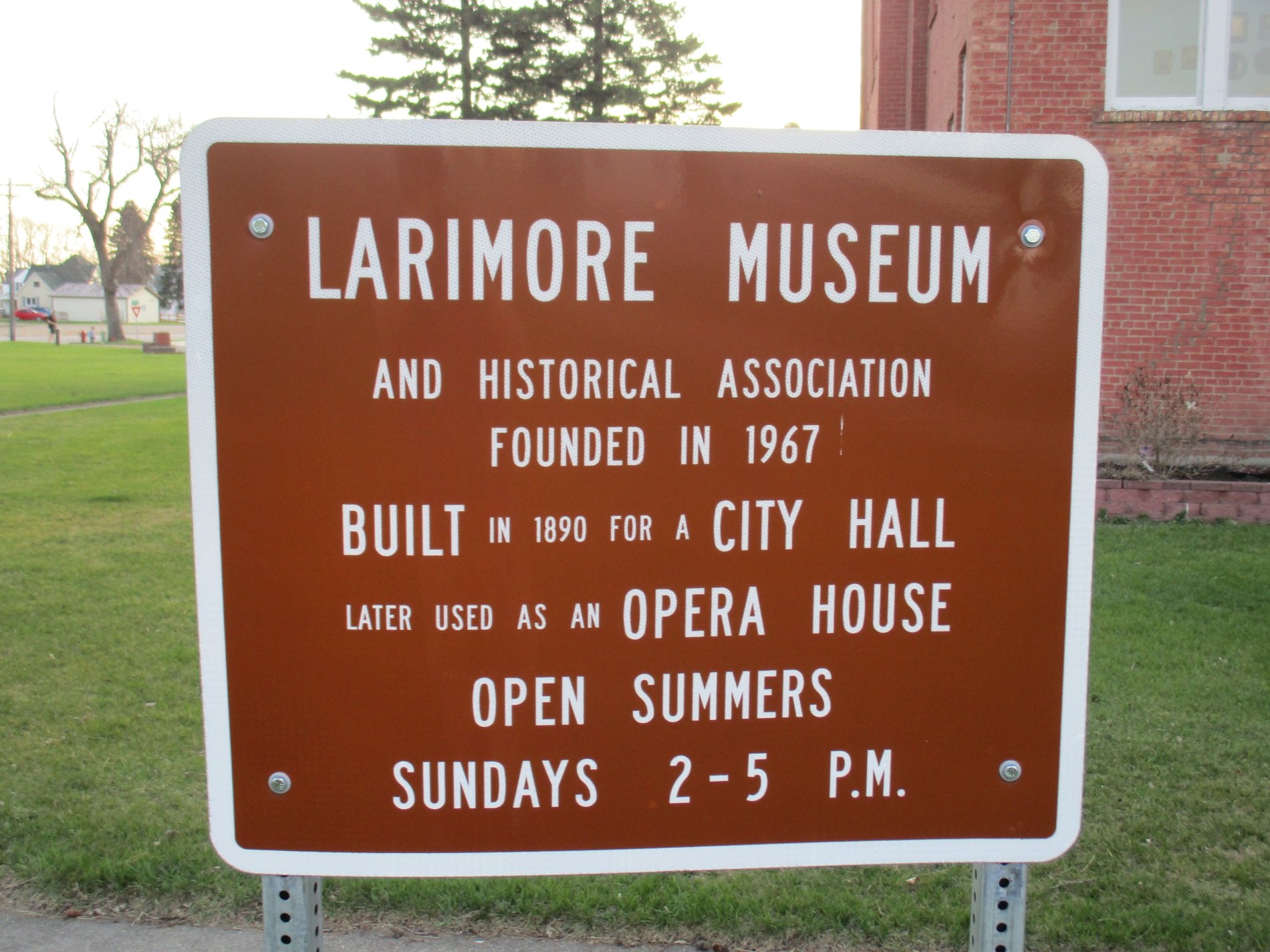 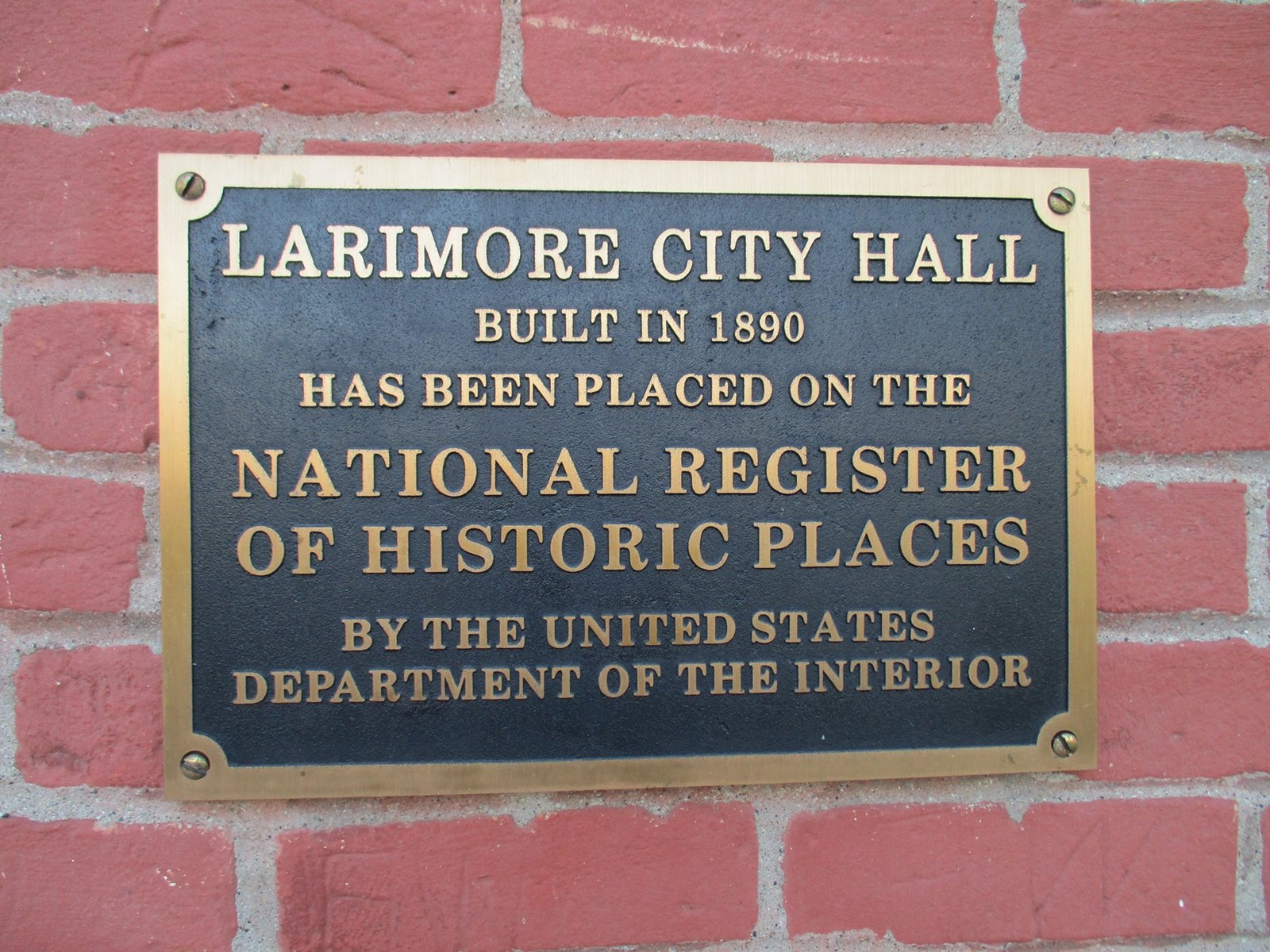 The south side of the building, showing evidence of changes to the exterior over the years, including the removal of the large Colonial Style fanlight windows. 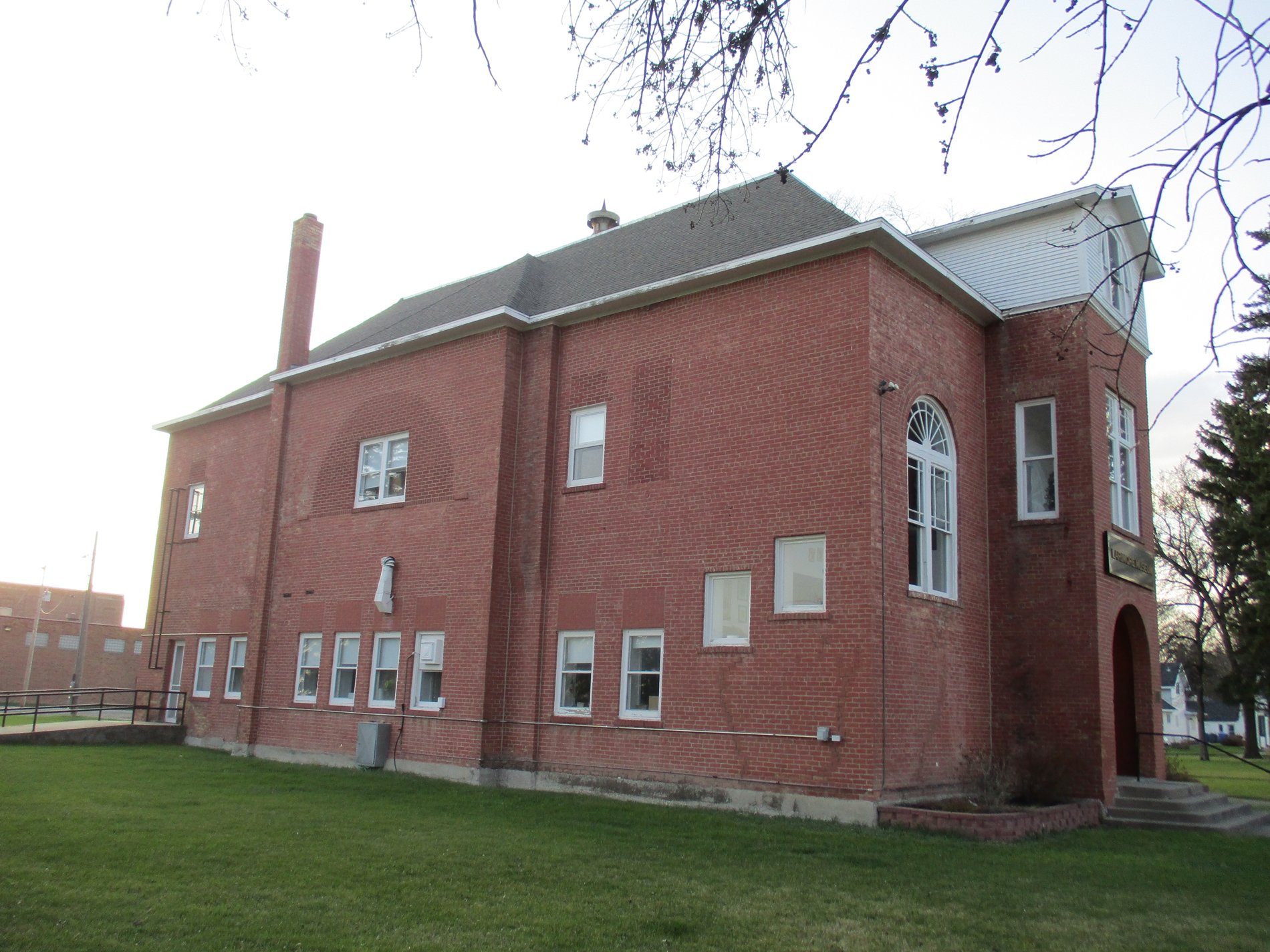 The old Larimore City Hall was built in 1890 and remodeled by the Works Progress Administration in 1938. Five years after it was built, it also acquired the name of Opera House to reflect the popularity as a site for concert and theatrical productions. It was the first brick building and the oldest standing civic building in the town.  As it stands today, it is best described as "a two and a half story rectangular structure of red-painted buff brick which rises to a hipped roof."1 It was originally built in the Colonial Revival style, but the WPA's remodeling gave it more of a Georgian Revival appearance. The front of the building originally sported a wooden clock tower and spire. These were removed and replaced by the present crenelated cap sometime prior to 1930. The exact reason for this is unknown, but it is probable that the decision was based on concerns about the wood's structural integrity as it aged or concerns about potential fire or water damage. Colonial style fanlight windows and Chinese style fretwork balconies were also removed early in the building's history for unknown reasons. A two story engine house was originally planned to accompany this building and provided it with electricity, but it was never built. Due to its importance to the city's history, it was placed on the National Register of Historic Places in 1990.

Under its original plan, the first floor of the City Hall was devoted to offices used by the city. These included rooms used by the city council, the mayor's office, and administrative and judicial offices. The first floor also housed the city jail. The second floor was built as a ball room but was used for many other functions over the years. Larimore School District 44 made frequent use of this floor, holding basketball games, graduation ceremonies, and school plays here, among other things. Churches rented out the space for worship services, and local groups made use of it for bingo and auctions. It was also used as a roller-skating rink, and the Edna J. Ralston Public Library occupied this floor in the 1950s. While the second floor was used for many different purposes over the years, the first floor was always home to the city government from 1890 until 1970, when it moved into a newer building. The Larimore Community Museum and Historical Association was founded in 1967, and shortly thereafter, it acquired use of this building for its present purpose as a museum of the city and area's history.

This building serves as an interesting example of the region's architectural history. The fact that it was the first brick building in the city shows that Larimore had, by 1890, achieved a level of prosperity and permanence as a town connected St. Paul, Minneapolis, and Manitoba Railroad (later named the Great Northern line under the leadership of James. J Hill) that civic leaders felt comfortable undertaking such a project. It was initially built by John W. Ross of Grand Forks, who holds the distinction of being the area's first licensed architect. While there are few traces of his work in Grand Forks today other than its city hall, many buildings in the city's downtown and business districts were once the product of his handiwork. As Clement Lounsberry noted in an early history of North Dakota, in Ross's later years, he "planned and designed many of the most prominent buildings in the state, including schoolhouses, courthouses, city halls, and other public structures, remaining up until the time of his death the leading architect of the northwest."2 The NRHP notes that it is entirely possible that the Larimore City Hall was the first such building overseen by Ross, but it is certain that it is the first example of his work in Larimore.

While it might not be immediately visible to the layman observer, the WPA's remodeling of the City Hall helps this building stand out among similar efforts undertaken in the region. As noted earlier, the organization's work here gave the building its present Georgian Revival appearance. This is unusual for WPA remodeling jobs in North Dakota. In most cases, their efforts conformed to a Craftsman or Art Deco/Moderne style. Very few buildings were remodeled according the the Georgian Style.

Currently, the museum houses several exhibits and artifacts demonstrating the history of the area. Among the displays are a sewing room, a bedroom, a dining room, a kitchen with numerous artifacts spanning over a hundred years, a school room, vintage clothing and hats, antique furniture, a buggy and a wedding gown belonging to the Larimore family, and several military items loaned by members of the community. There are also displays of historic dental and medical items as well as vintage fire and firefighting equipment. The Museum contains an archive of old local newspapers and news clippings dating back to the 1800s as well as old Larimore High School Yearbooks and local plattes. There is no official admission charge, but free will offerings are welcomed.