Originally a plantation of more than 200 acres, the current site encompasses the house site and family graveyard. The 16-acre site is located a quarter mile east of the modern route of Christanna Highway. The house faces south. Not occupied since the 1970s, the site was allowed to become overgrown. To improve drainage, the area immediately surrounding the house has been recently cleared of underbrush, revealing the remnants of a boxwood alley leading to the front porch. One outbuilding remains to the east of the main house. There is evidence of the foundation of a second building on the opposite side of the house. [The 1803 Mutual Assurance Society insurance policy labels the 18’ x 18’ building to the east as the “Spinning House.” The policy also names the 16’ x 16’ Wooden Kitchen; Wooden Store with shed; and Wooden Granary.] The balance of the property is wooded. A stone chimney is also located about 30 yards from the house. The periwinkle-covered burying ground, located approximately 50 yards southeast of the house, contains many unmarked graves as well as a memorial stone erected in 1974 for the Rev. Dromgoole and his family. 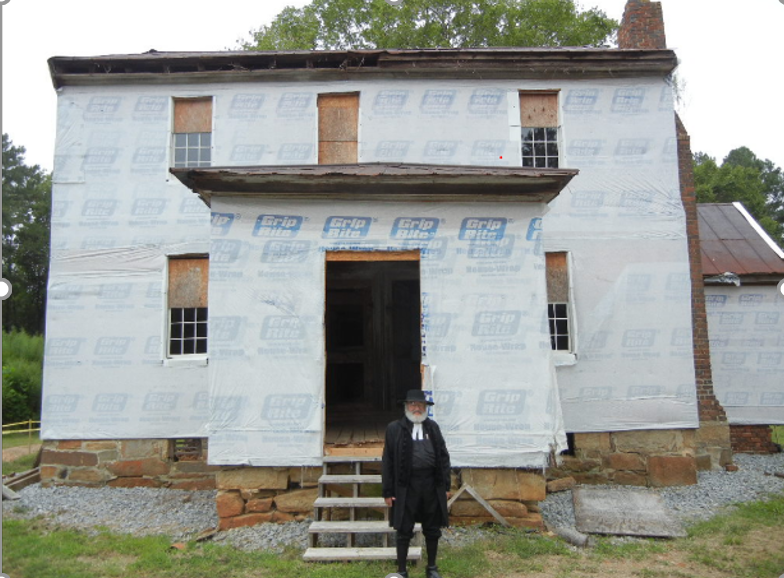 Edward Dromgoole (1751-1835) had emigrated to America from Ireland in 1770 and had been converted from Catholicism to Methodism. While preaching on the Brunswick Circuit, Dromgoole met, converted, and married Rebecca Walton, daughter of wealthy planter, John Walton. As a wedding present, Rebecca was given 200 acres of land in southern Brunswick County on which they built “Canaan” their home and the home of their family for generations. [The Dromgoole home and property was sold after the death of Edward Dromgoole III (grandson of Edward Sr.) in the 1920s.] Through the years Dromgoole acquired extensive lands in the Valentines area and operated a thriving plantation and a store, named “Sligo” which was the name of his home town in Ireland. He was also a magistrate and a member of the County Court for 45 years. He rode the circuit until 1784, then took over the ministry at Woolsey’s Barn, later called Mason’s Chapel which eventually became Olive Branch Methodist Church in Gasburg.   Dromgoole was devoted to the cause of freedom. During the Revolutionary War, Dromgoole read the Declaration of Independence from the courthouse steps in Halifax, NC for the benefit of those who could not read.

The Dromgoole home was frequently visited by the American Bishop Francis Asbury. It was at Canaan that Bishop Asbury, Reverend Peter Pelham and Dromgoole met to organize Ebenezer Academy, which was the first Methodist school in America. Canaan was also the birthplace and home of Edward’s youngest son, George Coke Dromgoole, who served in the Virginia House of Delegates and Senate; in the US Congress for 9 years where he was serving at the time of his death in 1843.

In 2008 in order to preserve this architectural and historical gem, the Foundation purchased the Rev. Dromgoole house and 16 acres. The long term goal is to preserve and restore the house and grounds and to add a structure for meetings and retreats in this quiet natural setting. The house will serve as the focal point and visitors will be able to watch progress as the house slowly undergoes restoration. The house reconstruction and research into the life and times of the Dromgoole family can serve as a tool for teaching and study.

All text and images are from the Old Brunswick Circuit Foundation.