First Baptist Church was established in the early 1800s, and for many years, the congregation met in an old school house known to locals as the White School House. The congregation eventually acquired their own building, and in 1902, reflecting the growth of the region and the congregation, this church building on Main Street was completed. The church has seen several additions and renovations, but the front edifice of the church has remained mostly unchanged from the time of its original construction. 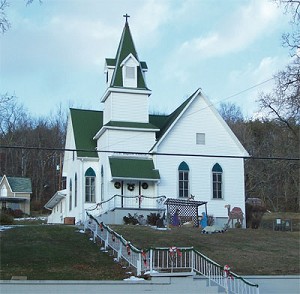 Coalton, like it's larger neighbors Jackson and Wellston, was once a boom town that consisted of a hotel, two train depots, and a large school. Coalton's growth was the product of the region's iron and coal boom in the late 1800s and early 1900s. Today, Coalton is a largely residential area on State Route 93 between Jackson and Wellston, consisting of two gas stations, a town hall, a police station, a fire station, and a public spring well.

The original lot for the church was sold to William Rickabaugh in 1901 for $100 while the current church lot was purchased in 1902 for $125 from B. F. Scott. All of the material for the structure was locally sourced with wood and other building material being acquired from the Arthur Leach Planning Mill in Wellston. The church bell was brought to Coalton in a horse-drawn wagon by Ephriam Luster from the Academy at Berlin Crossroads. In August 1903, the church took a $120 loan from Hillburn Dixon to purchase an organ for the Sunday services. The loan was repaid the following year in March of 1904.

Baptists, like the Methodists and the Presbyterians, were products of the English Reformation. Prior to the rule of Henry VIII, England was a Catholic nation. Henry split from the Catholic Church after the Pope refused to grant him a divorce from his wife, Katharine of Aragon. After a brief time of religious unrest in England, Protestantism took root and Henry VIII established the Church of England. This Protestant denomination was the official church of the nation but it reflected some Catholic influence. Over time, English Protestants influenced by the teachings of Protestant reformist John Calvin called for further changes to the Church of England. These groups were derogatorily referred to as Puritans because they wanted to "purify" the Church of England and purge its Catholic influence. A more radical group emerged out of the Puritans called separatists who believed that the Church of England could not be saved or improved. From this perspective, the only option for English Protestants was to separate completely from the official state church and create a new and purely Protestant church. The roots of the modern Baptist church trace back to the separatist congregationalists who split from the Church of England.