This church dates back to 1776 and was utilized by both Union and Confederate forces during the Civil War. The congregation's original church was built in 1731 and was later replaced by this building which was constructed between 1773 and 1776. This is the congregation's third church with each being constructed at this location. The original church building burned down around 1750 and the second church was also destroyed by a fire in 1770. 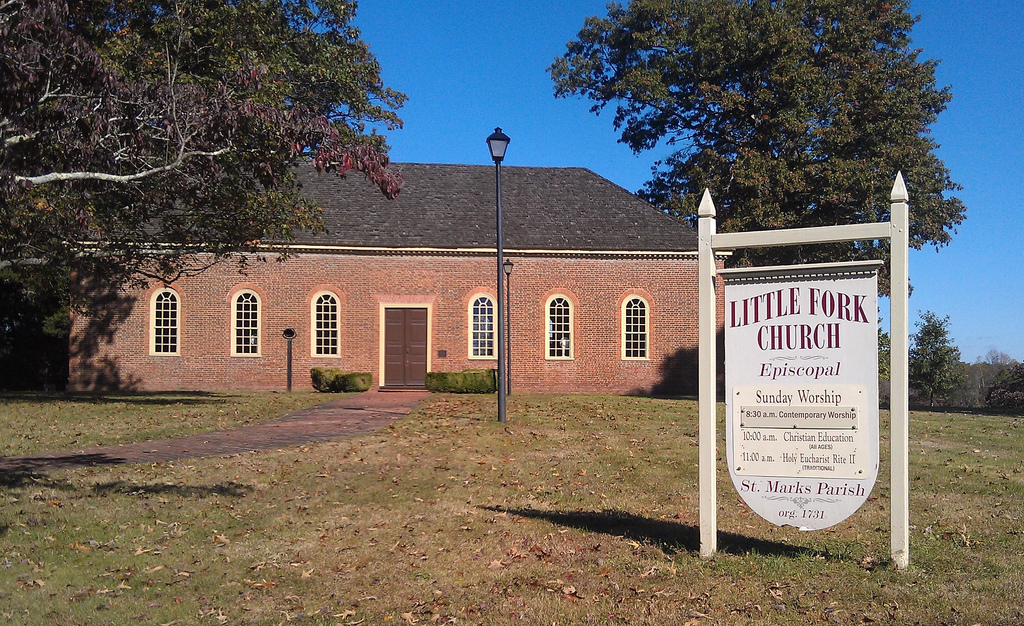 This church is the oldest in Culpeper County and the only church that dates back to the colonial era. The congregation chose this locationin 1731 owing to its location between the Rappahannock and Hazel Rivers. The present building was begun in 1773 and completed in 1776 at a cost of 30,000 pounds of tobacco. It is the third building at this location, two others having been destroyed by fire around 1750 and 1770.

Little Fork's general design is similar to that of Bruton Parish Church in Williamsburg, Virginia. The pulpit is positioned in the center of the north wall and reflects the emphasis on the sermon as the dominant action of worship in the eighteenth century. The pews are of low boxed design, each with three bench seats and a draft stopping door. It is assumed that in each pew the occupants provided a portable foot warmer.

Services at Little Fork ceased at the onset of the Civil War. Early in the war, the church grounds were used as a drill field by the "Little Fork Rangers", more correctly known as Co. D 4th Virginia Cavalry. Later, Union troops quartered at the church destroyed most of the interior furnishings for firewood in the cold winter of 1863, leaving only the shell of the building and the reredos on the east wall. Sometime after the war was over, a northern soldier sent $100 to the church for the construction of new pews to replace those vandalized for campfires.  On the south lawn there is a monument to commemorate the "Little Fork Rangers" which was dedicated in 1904.

After the war, the church was used by a Methodist congregation, except for an annual Episcopal service each summer when members of St. Stephen's in Culpeper would travel to Rixeyville for the service and a picnic. A painstaking restoration was undertaken in 1976; St. Stephen's was instrumental in this accomplishment. Lt. General A.J. Boyle, USA (Retired), of the Culpeper congregation, led the project and supervised the on-site work. Through the financial, physical and spiritual assistance of many, the restoration was completed in 1979. The church was reconsecrated on October 20 of that year. In 1989, the worshiping congregation obtained church status within the Diocese of Virginia.

By 1994, it was clear to all that a new facility was needed to meet the growing needs of the congregation. A Long Range Planning Committee was formed which, over time, resulted in the planning and construction of a Parish Hall, which was dedicated in June, 1999."