The Old Brick (Kennon) House is a historic home located in Colonial Heights, Virginia. It was built on the same grounds that a Native American "conjurer" once lived on. One of the oldest homes in the state, it has been on the register of historic places since 2003. Today it is owned and preserved by the Old Brick House Foundation. 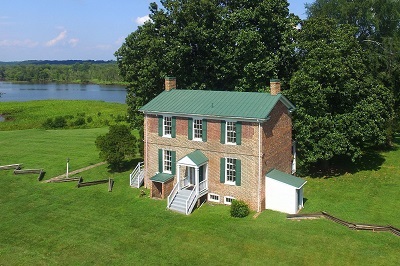 The Old Brick House, also known as the Kennon House, is one of the oldest standing brick homes in the state of Virginia.  It sits on the Appomattox River on a site where a Native American priest used to live.  This Native American priest was thought to have kept the evil spirits in the waters at bay.  The English referred to the Native Americans who filled this purpose as “conjurers”.  Archeologists have discovered many artifacts that date back to the Middle and Late Woodland periods, indicating a long standing presence of Native Americans.

In 1677, the property was purchased by Richard Kennon.  Kennon was a representative of Henrico County in the House of Burgesses as well as a successful merchant.  In 1675 he married Elizabeth Worsham.  Their first child died at age four and was buried on the property, there is still a headstone to this day.  Elizabeth Kennon deeded the property to her son William in 1711, which in turn he passed down to his son named Richard.  In the late eighteenth century the property left the ownership of the Kennon family and was divided amongst eight farms.  There is also an aspect of maritime history associated with the Brick House as it was a landmark for sailors and was even featured on many navigational charts.  In 1880, Robert Henry Batte purchased the Brick House after a fire had started in the kitchen.  It was quite destructive because using water proved to be difficult as the tide was low in the river and the well was too close to the home.  After the fire the house underwent reparations and two of the exterior walls were replaced.  In 1885 Batte sold the Brick House.

After having numerous owners, the Brick House was purchased by Willis Comstock in 1909.  In 1988 it was used as a real estate office shortly before it was deeded to the Conjurers Neck Homeowners Association in 1990.  In 2001 the property was delegated to the Old Brick House Foundation.  The house and the property it sits on, making up the Conjurers Neck Archaeological District, was added to the National Register of Historic Places in 2003.  Today The Old Brick House Foundation preserves this historic property.  Tours of the Old Brick House are by appointment, and it is also available to rent for special occasions (see website).