The Court of Two Sisters Cafe

The present structure at 613 Royal Street was constructed during the city's first economic boom in 1832. The flags on the front of the building are displayed for four of the ten sovereign flags that had once flown over Louisiana. The four flags represent France, Spain, Louisiana and the United States. The history of this property is older than the United States. 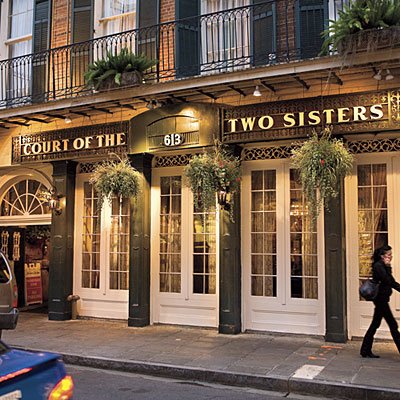 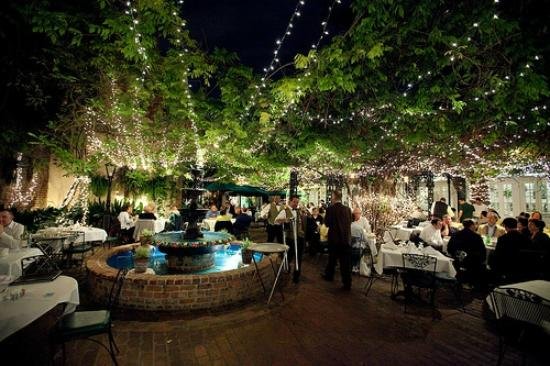 In 1726, the property of the Court of Two Sisters was a significant cultural presence in New Orleans. During that year, the second French royal governor of colonial Louisiana, Sieur Etienne de Perier, became the original resident of 613 Rue Royale. The 600 block of Royal Street was home to some of the most influential men in New Orleans. Marquis de Vaudreil, an early French governor and the one responsible for transforming New Orleans from a marshland village into a small version of Paris, was once a resident of 613 Royal. The second floor dining room of the Court of Two Sisters is called the Grand Marquis Room in his honor.
The structure which is the home of the cafe was built in 1832 during an economic boom in New Orleans. It was built for Jean Baptiste Zenon Cavelier, president of the Bank of New Orleans. In 1854, the Cavalier family did not own the building anymore. And in 1886, Emile Angaud purchased the building and the street level store at 613 Royal. Bertha, who was married to Emile’s son Baldomero Angaud, and Emma Camors set up their notions shop they called “The Shop of the Two Sisters.” Their shop originally sold Mardi Gras costumes, formal evening ware and occasionally, tea and cakes to their customers in their large courtyard.
In 1904, Bertha's husband died and the passed on to the sister's children. Shortly after, the shop was closed due to the flood of Italian immigrants in the area. In the next 30 years, the property would be passed through 7 owners.
In 1963, Joe Fein Jr. bought the restaurant and began to preserve its historical integrity. The family still owns the restaurant to this day. The Court of Two Sisters has become known for its live Jazz Brunch, friendly service and their beautiful open-air courtyard.